By Carl Zimmer and Rebecca Robbins 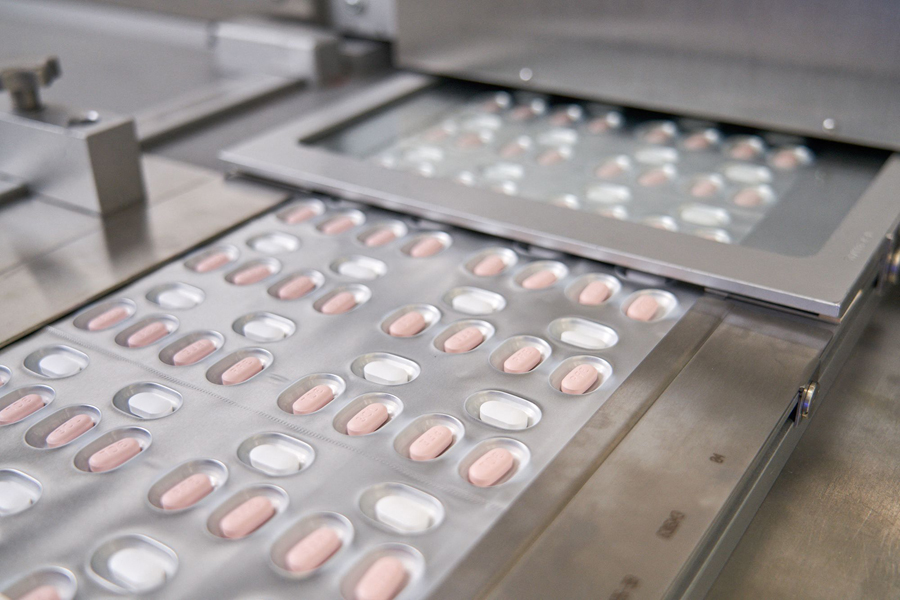 A photo provided by Pfizer, shows Paxlovid, Pfizer’s COVID treatment pill, being produced in a laboratory in Freiburg, Germany. A highly anticipated study of Pfizer’s COVID pill confirmed that it helps stave off severe disease, the company announced on Tuesday, Dec. 14, 2021. Pfizer also said its antiviral pill worked in laboratory studies against the Omicron variant of the coronavirus. (Pfizer via The New York Times)

Pfizer announced Tuesday that its COVID-19 pill was found to stave off severe disease in a key clinical trial and that it is likely to work against the highly mutated omicron variant of the virus. The results underscore the promise of the treatment, which health officials and doctors are counting on, to ease the burden on hospitals as the United States braces for a mounting fourth wave of the pandemic.

If the Food and Drug Administration authorizes the drug, which could happen within days, then patients might begin receiving it by the end of the year. Although supply will be limited at first, public health experts are hopeful that the pills might curb the worst outcomes from the disease, no matter the variant.

Pfizer said its antiviral pill was found to reduce the risk of hospitalization and death by 88% when given to unvaccinated people at high risk of severe COVID-19 within five days of the onset of symptoms. The company also said that laboratory experiments indicated that the drug will attack a key protein in the omicron variant, which is surging in South Africa and Europe and is expected to dominate U.S. cases in the weeks ahead.

“This is quite amazing and potentially transformative,” said Sara Cherry, a virus expert at the Perelman School of Medicine at the University of Pennsylvania who was not involved in the study. “If we could keep people out of hospitals, that would have a huge impact on health care.”

The promising Pfizer study was good news on a day when the Centers for Disease Control and Prevention warned that a tidal wave of infections, from the omicron and delta variants, could arrive as soon as next month, just as influenza and other winter respiratory infections peak.

“The early signals say there are going to be waves coming,” said Scott Becker, CEO of the Association of Public Health Laboratories, who was on the call when the CDC issued its alert during a briefing.

Last month, Pfizer asked the FDA to authorize the treatment, known as Paxlovid, for high-risk adults, based on a preliminary batch of data. The new results will undoubtedly strengthen the company’s application for the drug, which is meant to be prescribed by a health care provider after a positive virus test and taken at home.

The results, based on an analysis of more than 2,200 unvaccinated volunteers at high risk of severe disease, largely match the company’s initial, smaller analysis of the clinical trial, released last month.

Pfizer also released preliminary data from a separate trial looking at people with a lower risk. These volunteers included vaccinated people who carried a risk factor for severe disease, as well as unvaccinated patients with no risk factors.

Among this group of 662 volunteers, Paxlovid reduced the risk of hospitalization and death by 70%, the company said.

Several public health experts said they thought it was unlikely that the FDA would immediately authorize Paxlovid for people at standard risk of becoming severely ill from COVID-19 based on the preliminary results, although the agency may do so eventually.

“Maybe it’s something that your physician would think about if you had severe underlying conditions,” said Seema Lakdawala, a virus expert at the University of Pittsburgh.

Lakdawala said that regulators might consider expanding the drug’s use if the benefits outweighed any potential risks. Paxlovid might shorten the amount of time that people shed the coronavirus, for example, which could, in turn, reduce how long people have to spend in quarantine. It might even cut down the chances that infected people pass on the virus to others. “All of those would be hugely beneficial,” she said.

These possibilities would first have to be confirmed in trials, Lakdawala cautioned. Pfizer is running a trial to see how well Paxlovid can block transmission in households, and expects results in the first half of 2022.

Health officials have been waiting for a convenient option like Paxlovid since the start of the pandemic. They are counting on the pills to reach many more people than the cumbersome monoclonal antibody treatments, which are typically given at a hospital or clinic. Several brands of antibody treatments may not work as well against omicron.

Still, there are logistical obstacles that could limit the Pfizer treatment’s promise, experts cautioned. To receive the pills, patients are expected to need a positive coronavirus test and a prescription from a health care provider, all within five days after developing symptoms. Those challenges could be especially pronounced among the people most vulnerable to becoming severely ill from COVID-19.

The federal government has ordered enough of Pfizer’s pills to cover 10 million people, at a cost of about $530 per patient. Pfizer will have about 180,000 treatment courses ready by the time it receives its expected authorization this month, but some of those will most likely go to countries other than the United States. The company is expected to deliver only enough of its pills to cover 300,000 Americans before the end of February, and then sharply increase the pace of its deliveries.

“There’s probably some tempered expectations that are needed, because this is not available today. It’s not going to be available a month from now for the average person. It’s going to be something that slowly gets rolled out,” said Dr. David Boulware, an infectious disease specialist at the University of Minnesota.

Pfizer’s good news came as its rival, Merck, awaited word on authorization of its own antiviral pill for COVID-19, known as molnupiravir. In October, Merck and its partner Ridgeback Biotherapeutics announced that preliminary data showed the pill reduced the risk of hospitalization and death from COVID-19 by 50%, if taken within five days of the onset of symptoms.

But once the companies carried out a final analysis on all their data, molnupiravir’s effectiveness dropped to 30%. At an FDA advisory committee meeting last month, a number of experts reacted coolly to this modest effectiveness, especially given some concerns about the safety of the pill.

The committee narrowly voted in favor of molnupiravir’s authorization. But now, two weeks later, the FDA has yet to announce whether it will do so. In the meantime, France has turned down Merck’s application, citing its modest effectiveness and concerns about safety. Britain authorized molnupiravir last month.

“I don’t think the Merck pills have a long life in the United States if the Pfizer pill turns out to work as well as the data would suggest and there’s enough supply,” said Dr. Walid Gellad, who directs the Center for Pharmaceutical Policy and Prescribing at the University of Pittsburgh.