How the pandemic killed the B2B dream of agritech startup Clover, and gave it a consumer makeover in its new avatar— Deep Rooted. Can there be a brand in veggies and fruits? 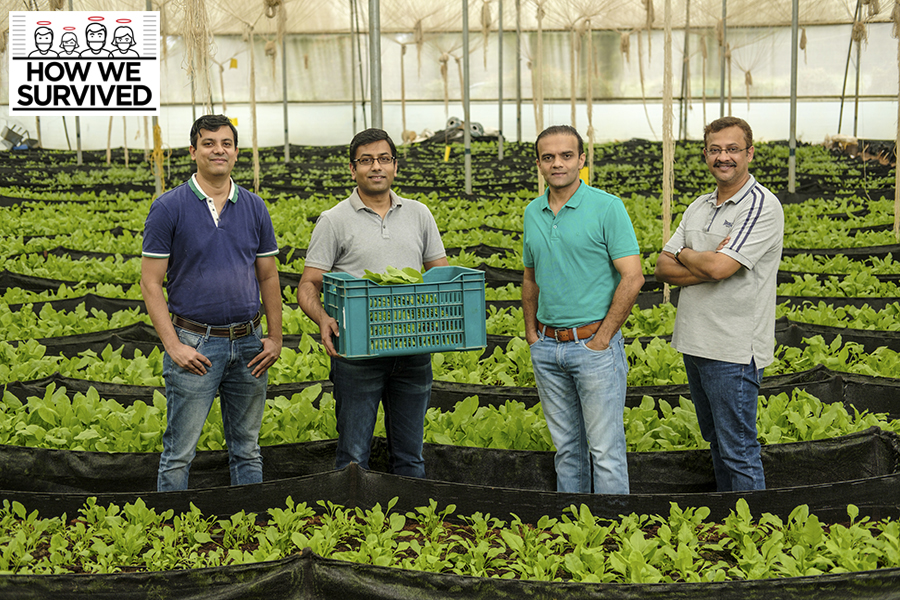 Covid-19 uprooted Clover. For two-and-a-half years, Clover, a greenhouse agritech startup supplying fresh produce to hotels, restaurants and cafes across Bengaluru and Hyderabad, was content with its B2B business. The co-founders—Avinash BR, Gururaj S Rao, Arvind M and Santosh Narasipura—dabbled into hydroponic farming in 2017 as a weekend vacation gig, started Clover in May 2018, and raised seed round from venture capital firms Accel and Mayfield in December. Another round of $5.5 million from Omnivore, Accel and Mayfield happened last February, and reportedly a million dollars from Alteria Capital came after three months. The plan was to expand operations to Mumbai, Pune and Chennai.   With Clover, the four co-founders were taking a stab at solving a deep-rooted problem: How to bring together small polyhouse (greenhouse) farmers and organise the supply side of fresh agricultural produce. The intent was good, the execution was perfect, and Clover gradually built its network with farmers owning two to three hectares of greenhouse and open farms.

By the end of 2019, the agritech startup had around 50 acres of managed farms, built a team of agronomists who worked very closely with the farmers, and set sights on taking its managed farm to 200 acres. “We were telling the farmer what to grow, how to grow, and ensured that they got the right yield productivity and also grew the produce in a clean manner,” says Avinash BR. Demand for such products existed as Clover found ample takers in cloud kitchen owners, QSR brands, modern retail chains and hotels. What was missing, and this is what Avinash and his gang were trying to solve, was an organised supply side. “We were doubling down on the supply side and B2B business,” he recalls. A comprehensive blueprint to go direct to the consumer, he lets on, was prepared but the rollout was planned after a good 15 to 18 months.    Come March 2020, and institutional demand vanished. “Over 70 percent of the business was from B2B customers,” rues Avinash. Covid posed a unique problem. Clover had control over the supply side. The demand side, unfortunately, played villain. Though the revenue crashed and the prospects looked gloomy, there was one silver lining: Direct to consumers. Team Clover went back to the drawing board, rejigged its plans and reached out to housing societies. What helped the gang in their outreach was the neo love of consumers for trusted and branded products. “We had a blueprint for B2C business as well, but it was not immediate. The plan was to roll out in 15 to 18 months,” says Avinash. The pandemic, he underlines, hastened the process. The gambit worked.   A year into the pandemic, Clover puts its B2B business in deep freeze, and dons a consumer avatar of ‘Deep Rooted’. The direct-to consumer fruits and vegetables brand is founded on three pillars: Fresh, clean and community. “We will deliver fresh produce, and in under 24 hours from farms primarily less than 150 km away from urban cities,” says Avinash. India, he underlines, has lacked a brand in vegetables and fruits primarily because people have not been able to manage or control supply. “If you don’t manage the supply side of things, you can never guarantee quality and consistency,” he says. Clover had that control.    On the demand side, the control is equally strong. For Deep Rooted, two factors helped in channelising the headwinds into tailwinds. First, the pandemic created a massive pull for safe products. “Consumers are wary about where they're buying their fruits and vegetables from,” points out Avinash. People today, he lets on, are willing to embrace brands which are built on sustainable and foundational principles when it comes to food. Avinash and his gang were sorted on this front. While making the shift, Clover didn’t have to do anything different on the supply side. “We were always into growing clean and fresh produce,” he says.   Second, the Indian consumption story over the last two decades has seen a structural shift. The share of milk, meat, fruits and vegetables in an average person's diet has seen a steady uptick. What this means is that markets are getting organised, and there is a bigger role for branded players. “Look at what happened in the milk and meat space,” says Avinash. There have been massive supply-chain interventions, and consumer brands have emerged. “Now the time is ripe for the same play in fruits and vegetables,” he reckons. Deep Rooted, he lets on, is a blended play of being present offline and online. From kiranas and modern retail to ecommerce portals, the products would be available on all platforms.   The backers of Deep Rooted are showing deep faith in the branded play of the agritech startup. “Over the last decade, consumers are looking to embrace brands that are built on foundational values and principles,” contends Prashanth Prakash, partner at venture capital firm Accel. While health and wellness have become cornerstones for living, fresh food has started playing a crucial role. “With Deep Rooted, Clover can fill this clear gap in the branded food and vegetable space,” he says. The omni-channel approach will make it accessible to a large cross section of consumers, he adds.   The going, though, won’t be easy. Largely for three reasons. First, the consumer side of the fruits and vegetable business is a scale play. Though Deep Rooted is now confined to two cities, it is yet to have a large horizontal presence. For the time being, aspirations to build a national brand don’t match the bandwidth of the fledgling startup. Second, building a brand in fruits and vegetables takes decades. “It’s not a fast food business. It’s a trust play, and it takes years,” says Ashita Aggarwal, marketing professor, SP Jain Institute of Management and Research. Look at Safal. The fresh fruits and vegetables brand of Mother Dairy reportedly has over 400 outlets across Delhi-NCR and Bengaluru. “It has been there since decades,” she points out. Third, investors need to have loads of patience with such agritech startups. The venture needs continuous funding and there is no quick return.   Avinash, for his part, is not worried about the challenges. There might have been players in branded fruits but they are all catering to the export market. “They don’t cater to the domestic consumer. So the opportunity is huge,” he says. While conceding that Deep Rooted is not the first player to take a stab at the branded fruits and vegetables business, Avinash asserts that his predecessors were more focussed on generating demand and spread too thin in terms of having a wide presence. “We won’t be distracted by trying to go horizontal. We would go vertical,” he says, alluding to the plan to stay away from expanding too fast across cities.   Covid might have uprooted Clover, but it has helped Avinash and his team go Deep Rooted.

Tweets by @forbesindia
Nestlé India: Inside the city slicker's rural gambit
Joe Biden's $2 trillion plan: Where will it come from, where will it go