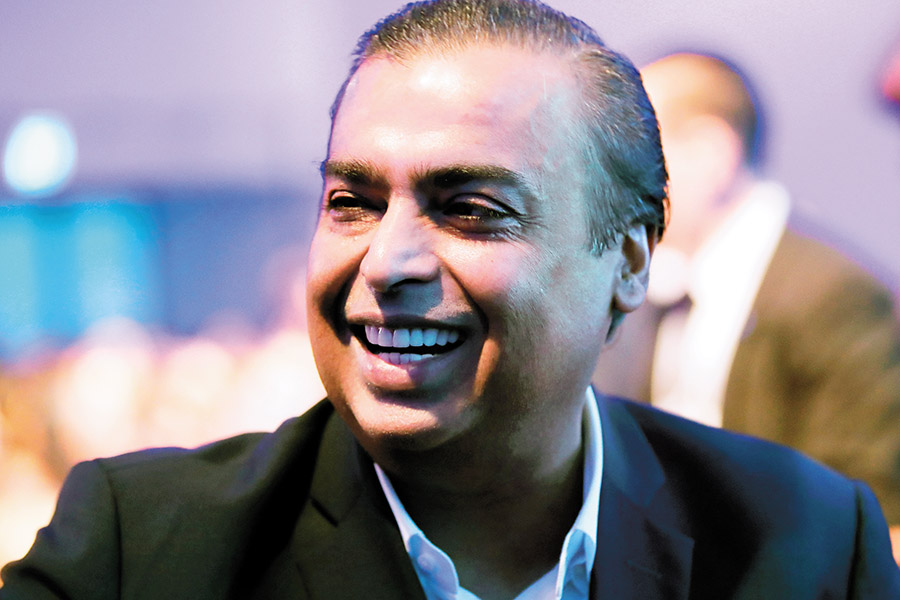 A quick divestment of a part of its telecom business and India’s largest rights issue have catapulted Reliance Industries (owner of Network 18, publisher of Forbes India) to pole position in India’s most valuable company sweepstakes. Since April, when the company announced plans to raise ₹53,125 crore through a rights issue, the stock has risen by 15.7 percent, taking its market capitalisation to ₹10,93,000 crore. In the same time, the benchmark Sensex has gained 3.6 percent. Reliance has been responsible for 19 percent of those gains. With a net wealth of $63.7 billion chairman Mukesh Ambani is now the world’s tenth richest man. He has added $26.9 billion to his fortune since the Forbes World Billionaires List came out in March where he was No. 21 with a net wealth of $36.8 billion. 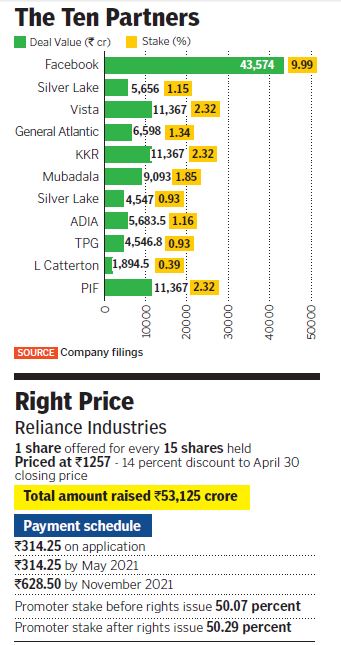 The Jio Platforms deal spree began on April 22 with Facebook investing ₹43,573 crore in the company for a 9.9 percent stake. Since then deals have been announced regularly—10 investors have brought in ₹115,694 crore for a 24.7 percent stake.

Money has flowed in on account of Jio’s positioning as a platform offering everything from voice to data and movies to education. The company has built an impressive array of offerings. “With the investments made, the marginal cost for each additional user will be very low,” says Abhimanyu Sofat, head of research at IIFL Securities. “All the company has to do is monetise its various offerings.” There are also synergies with Reliance’s retail business that are likely to yield benefits for both Jio and Reliance Retail. Recently launched Jio Mart, a grocery home delivery service, is available in 200 cities. There are plans to integrate WhatsApp into the ordering and payment process.

Jio no longer sees itself as merely a telecom provider and has received a valuation befitting its newfound status as a technology player. The deal with Facebook was done at an enterprise value of ₹462,000 crore. Its EV/Ebitda multiple is 20 times.

Also attracting investors has been the hope that telecom average revenues per user (ARPUs) in India, which are the lowest in the world, are slated to rise. In Q4 of FY20, Jio had an ARPU of ₹130.6, while Airtel’s was ₹154. Jio, Airtel and Vodafone Idea have signalled their intention to take prices up further. With capital investments made, expect the price increases to flow to the bottom line.

Ambarish Baliga, an independent market expert, believes telcos could take tariffs up to ₹200-250 a month without any backlash. “We have to remember that data (prices) are the new onion,” he says. Taking ARPUs back to ₹500 a month will likely be politically impossible.

In June, the company raised ₹53,125 crore through a rights issue, its first in 29 years. The issue was oversubscribed 1.59 times and investors will have to pony up the money in tranches till November 2021. A significantly deleveraged balance sheet has also given it the flexibility to raise money for the next leg of growth.

Tweets by @forbesindia
National Doctor's Day: Why each day is a new struggle for these resident doctors
Crypto Expert Sydney Ifergan crusading against fake cryptocurrency news through the currency analytics and TCAT