Sashidhar Jagdishan inherits a proven entity from predecessor Aditya Puri. However, the 'bank insider' will have to rebuild trust among business leaders and devise his own strategy when NPAs rise 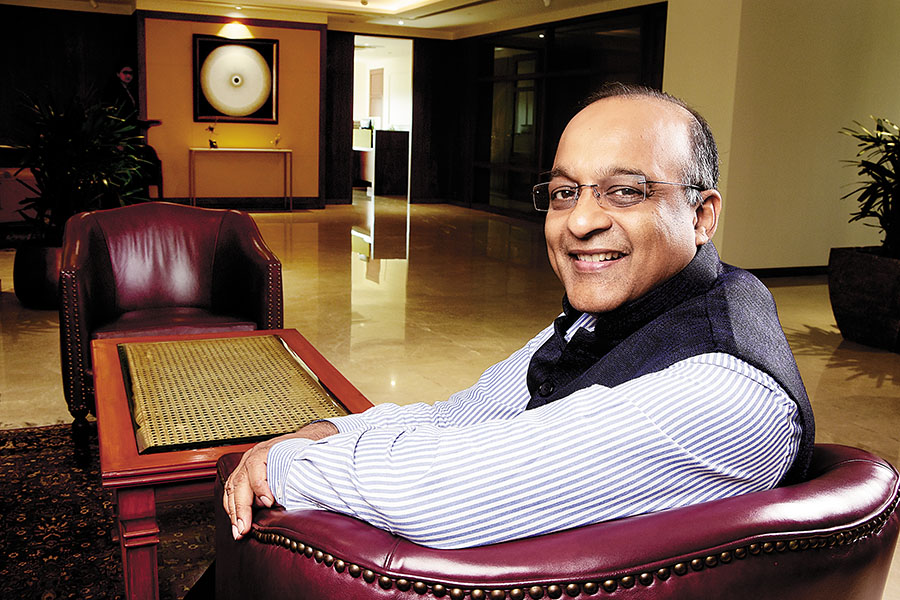 Sashidhar Jagdishan, HDFC Bank’s new managing director and CEO, takes charge from veteran banker Aditya Puri on October 27. These are challenging times, as the devastating impact of the Covid-19 pandemic is visible across sectors and the threat of deteriorating asset quality is high.

A vast number of people have either lost their jobs or had to face salary cuts. Small businesses have been hurt the most by lack of revenues over the past six months. The Reserve Bank of India (RBI) has forecast non-performing assets (NPAs) for banks in India to rise to 14.7 percent in the worst case scenario. The gross NPA ratio to total advances is at 8.5 percent in FY20.

Jagdishan will also have a pain point to deal with, which predecessor Puri rarely faced. The bank’s image has been tarnished in recent weeks after reports—led by whistleblower who goes by the pseudonym of Madanlal Dahariya on Twitter—emerged of charges of mis-selling or forced selling of GPS products to auto loan takers.

Puri told investors at the latest annual general meeting that “internal inquiries into the matter have not brought out any conflict of interest issue nor does it have any bearing on the loan portfolio”. Ashok Khanna, HDFC Bank’s former group head of secured vehicles loans, quit in March.

“The bank’s reputation has been tarnished. The controversy surrounding malpractices in the auto loans division means that there is a clear failure in internal auditing,” says Hemindra Hazari, an independent banking expert who publishes his writings on Singapore-based research platform Smartkarma. “The RBI should investigate the functioning of this business vertical, which had no business to sell GPS products. Was there a quid pro quo? If so, it must be exposed.”

Grading jobs, not people
The exit of Khanna and other bank veterans, Abhay Aima, group head of private banking, and Munish Mittal, its chief information officer—both were seen to be close to Puri—means that Jagdishan will need to start afresh in rebuilding trust among business leaders and sharing information.

The bank however feels otherwise and clarifies that recent senior management exits were not ad-hoc and that the transition has been well planned. "The bank believes the impact should be manageable (as with previous exits)given the deep talent pool at the bank," Morgan Stanley's Sumeet Kariwala and Subramanian Iyer, say in a report to clients. But ill-timed exits tend to create an atmosphere of insecurity and business leaders wanting to hold on tightly to their portfolios. If this happens, it would be a deviation from the culture that Puri had created in the bank. He had introduced the formula of grading jobs, not people: A person has to be competent to take on a job of a particular size, which can give you that grade. “Normally people don’t want additional responsibility. But at HDFC Bank, you could not grow until you took on additional responsibilities and its growth parameters,” recalls former HDFC banker Chitra Pandeya, now a consultant at logistics firm Swift Cargo. Pandeya headed liabilities and payments products at the bank when Puri was at the helm. 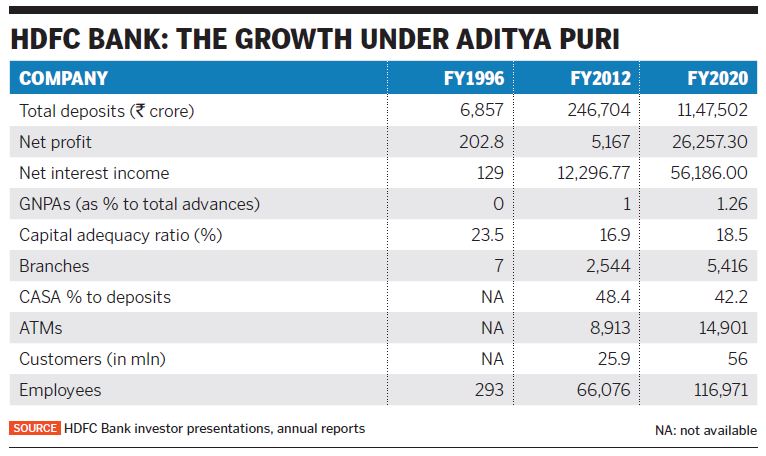 Jagdishan may also not have the option of creating his own strategy: He may need to continue to adopt the formula that Puri created, which made the bank the giant it is today (see table above). Puri has been instrumental in adopting a well-oiled practice called ‘Follow the money’. This means whether it’s the debit or credit side, the bank should seek to increase the market share of the customer within the bank. The money should be brought into the bank’s fold, through trading, forex, card transactions. This practice—well-used by Citibank—has since been adopted by several other retail banks such as ICICI Bank and Kotak Mahindra Bank.
It is well known in banking circles that Puri does not own a mobile phone. That, however, did not stop him from understanding the powers of technology and mobile banking to acquire new customers. Puri’s legacy, in terms of comprehensive and relentless reviews while discussing or presenting departmental budgets, will continue. Jagdishan, who has been appointed for a three-year tenure, has been a part of these meetings.

“Being the CFO and in charge of MIS [management information system], he has an overall view of the bank to drive profitability. What we need to see is whether he will be aggressive and chase achieving targets,” says Hazari.

Pandeya believes Jagdishan, a climbed-up-the-ladder leader, will have complete insight into the bank’s data, and therefore will bring intuitiveness beyond just financial numbers or managing cost controls.
"Jagdishan has been driving most of the growth initiatives over the past 2-3 years, his focus will be on taking execution to the next level continuing the collective approach, with focus on better utilising and being the industry leader in new age delivery channels. This will likely drive improvements in both growth trajectory and margin efficiency," say Anand Swaminathan and Nidhi Singh, research analysts at Bank of America Securities.
Jagdishan laid out HDFC Bank’s growth plan for the medium term: The key message of the management was its strategy to bring in product and people-driven changes via a revamped focus on capturing the rural/semi urban market segments and utilising the bank’s already wide presence and collaboration with CSC networks, streamlining physical branch presence and driving process driven efficiencies, continuing to expand its virtual RM network to drive higher revenues and lastly digitisation and innovation, with a precise focus on delivering global first products and services, the BofA report adds.
Jagdishan’s challenges are, then, more likely to be external: Competition from fintech firms and small finance banks, which continue to nibble at the rural banking business space. It will be interesting to see how he deals with the issue of bad loans that arise from unsecured loan credit. HDFC Bank has an exposure of 17 percent in the form of unsecured retail credit in its loan book, which is most susceptible to turning into a bad loan in a weak business or job environment. For ICICI Bank and Axis Bank, this exposure is at 9 percent.

Though rising NPAs can depress credit growth, hamper economic recovery and drive up the cost of capital, for most well-capitalised banks, including HDFC Bank, this will not be a problem. They will be able to overcome this crisis faster than the less-capitalised ones.   "For the HDFC Bank board of directors the succession planning could have been handled with more finesse and Sashidhar, like executive director Kaizad Bharucha, should have been elevated to the board at a much earlier stage and also should have been exposed to being in-charge of an important business vertical which sadly was not done," says Hazari.  But like what most business leaders want, Puri will leave the bank in a better position than when he had joined. His legacy can be best summed up by Raamdeo Agrawal, veteran investor and co-founder of Motilal Oswal Group: “The next HDFC Bank is HDFC Bank.”

Tweets by @forbesindia
Teenpreneurs Ep 5: Got milk? This card helps you check if it's adulterated
Chingari raises $1.3 million in seed round funding, will improve camera