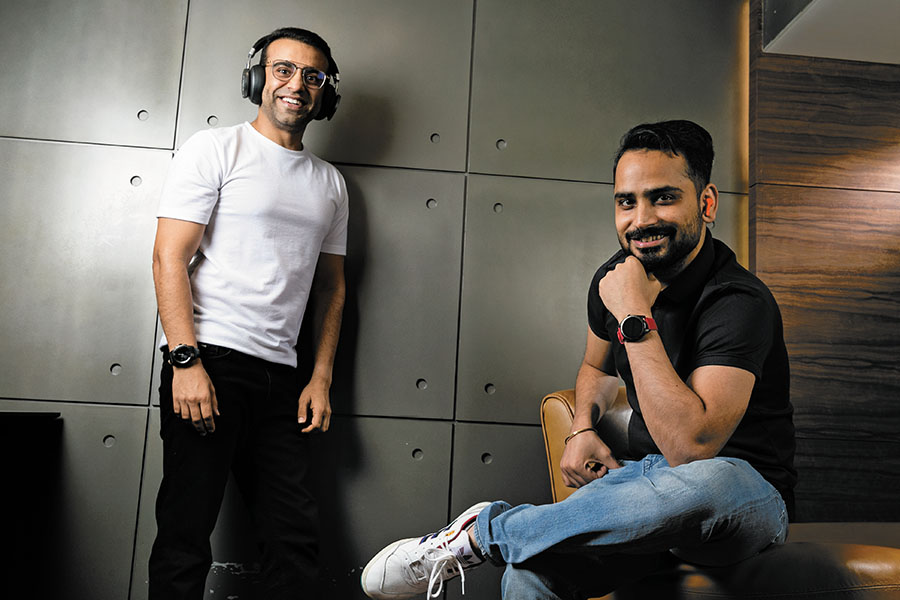 Brothers Amit (left) and Gaurav Khatri took the entrepreneurial plunge in December 2014 by starting Noise. They say it’s a brand for millennials and will always remain so
Image: Madhu Kapparath

Gaurav Khatri knew it was all about listening to the noise. “This (noise) is within each of us,” says Khatri. “It constantly pushes us to follow our dreams,” adds the commercial pilot, who decided to pursue his dream when he was 26.

“I always wanted to build a product in the consumer electronics space,” he adds. Khatri, along with brother Amit, took the entrepreneurial plunge in December 2014 by starting Noise. “We wanted a quirky name, a name that could instantly connect with millennials, and also help us in standing out,” says Gaurav, explaining the reason behind the name of the venture.

The Khatri brothers, though, didn’t make much noise about their online venture. There was no advertising... zero marketing dollar was spent. The duo decided to bootstrap, pooled in over ₹7 crore from savings, and started by selling smartphone covers.

In early 2015, India was on the cusp of a smartphone boom and, for youngsters, quirky and stylish covers were a style statement. The plan worked, and the online-only venture clocked a revenue of a little under ₹10 crore in the first year.

Though the beginning was modest, the market for cases was getting chaotic. Too many players—small and unorganised—flocked to the segment because of the low-entry barrier. The brand, the duo realised, was getting lost in the noise. The market for cases got commoditised, price-cutting became the norm, and the brothers decided to explore smart accessories.

Over the next two years, the Khatris sold smart wearables and Bluetooth earphones. In fact, it was one of the first brands in India to roll out wireless earbuds. Noise was getting transformed into a smart consumer electronics brand. The success got reflected in high-decibel sales: From ₹72 crore in the March-ended fiscal 2018 to ₹225 crore the next year, to ₹430 crore in the financial year-ended March 2020. Early this year, the startup roped in cricketer Rohit Sharma and launched NoiseFit Fusion, a full-touch hybrid smartwatch. “We want to create a big homegrown consumer technology brand that sells outside India,” he says.

Noise, contends Faisal Kawoosa, founder of techARC, has been selective in its product portfolio. “It does not add products for the heck of it. The brand identifies a gap and then goes about it,” he says.

In a cluttered smartphone accessories and smart wearable market where established multinational players offered multiple products and SKUs (stock keeping units), Noise resisted the temptation to offer something for everybody. Take, for instance, the decision to stick to action cameras. The startup stayed away from dealing in all kinds of cameras. “It worked,” says Kawoosa. Another positive for Noise was affordable pricing. This too worked well for the upstart, he adds.

Khatri, for his part, was clear from day one that Noise won’t be a price warrior. “We didn’t pluck the low-hanging fruit,” he says. The move turned out to be one of the early challenges for the fledgling startup. In the consumer electronics market, consumers usually gravitate between a cheap brand or offerings from a branded company. Noise was sandwiched. “We were ‘rightly’ priced,” he says.

The biggest early challenge, though, was winning trust. For an online-only brand, it was a question of life and death. Noise didn’t have a physical store and didn’t advertise. “Just showing users Instagram or Facebook page and expecting them to buy was not easy,” recalls Khatri. Though there was an encouraging sign—people were coming to the website—it rarely materialised in conversion.

The brothers reached out to such users and assured them about the quality and credibility. The move worked.

Now came the second challenge. When the Khatris launched speakers and headphones, they didn’t realise that the segment was already mature. Big foreign brands with deep pockets had been selling products in the segment for over a decade. “For any new player, making a mark was impossible,” he recalls. The solution, he lets on, was a realisation that the brand has to find its niche. “We needed our mojo,” he says. And it came by listening to the users. This meant extensive consumer research, establishing a design and research and development team in India, and coming up with features that very few had. Take, for instance, the move to launch wireless headphones. “We were the first homegrown brand to do this,” claims Khatri.

Going back to consumers, identifying gaps and launching a product became a norm. The next sub-segment to get disrupted was smart wearables. Consumer insights revealed the problem: Either there was a smart band, or smart watch, and the irritant was the small screen. The result was a bigger screen product, which turned out to be a bestseller. Though top cities continue to be the main market for Noise, there has been a steady uptick in demand from Tier II and beyond. “Brands talking directly to consumers would be the ones staying relevant,” says Khatri.

“ There is a noise within each one of us, the burning flame that’s constantly pushing us to follow our dreams.”
Gaurav Khatri, co-founder

Direct to consumers is going to be the future. In a media and entertainment report titled ‘India’s Digital Future,’ released last August, KPMG observed that digital disruption has made it vital for media businesses to pivot to a direct to consumer business model. With this transition, the report underlines, comes the imperative to invest in better understanding of the end consumer. The suggestion and insights hold true for all kinds of businesses getting disrupted by new-age startups.

For Noise, the next big challenge would be offline expansion, and setting up a manufacturing ecosystem in India. Though the startup has an R&D and design team that comes up with cutting-edge technology and variants, the disruptor brand could get disrupted. The business model can be replicated by a new startup that ties up with contract manufacturers in China and comes up with products based on consumer insight. “Xiaomi disrupted Samsung, and Realme disrupted Xiaomi,” says a tech analyst. The tool of disruption was the same: Online, he says, alluding to the possibility of the same medium churning out a potential rival for Noise.

Khatri believes in continuous innovation to stay ahead of the curve. “Noise is a brand for millennials and will always remain so,” he says. The mantra seems to be listening to the inner noise and living the dream.