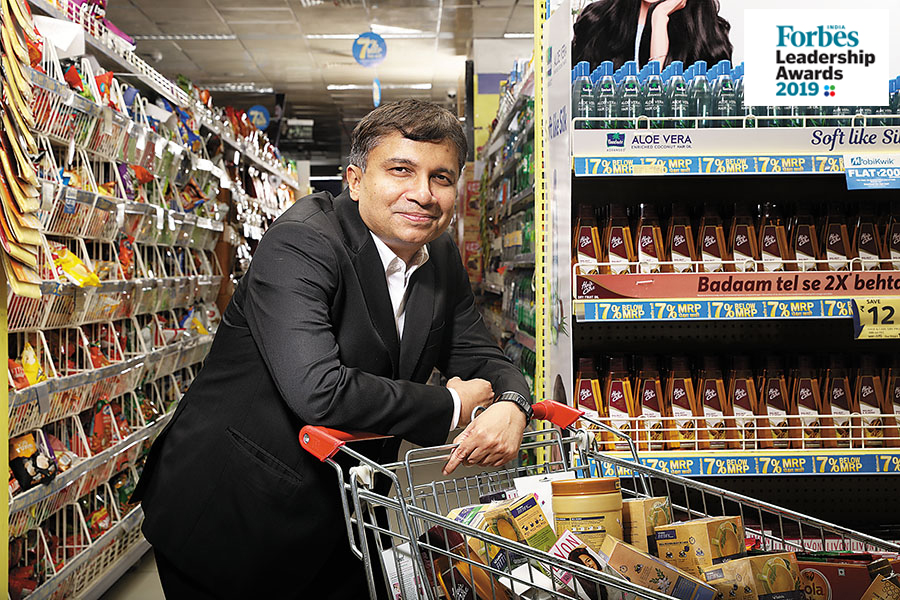 On a pleasant October morning in Mumbai, Saugata Gupta is frantically responding to emails and going through digital-related presentations at his Grande Palladium office in Bandra-Kurla Complex. It is only 8.30 am and like most days, the 51-year-old has his hands full.

Twelve years after being elevated to lead Marico’s India business from being a sales a marketing head, he is preparing for a new battle: To add muscle and volume to the consumer goods manufacturer’s newest categories of premium personal care, male grooming products and health foods. The challenge is even more daunting considering the economic slowdown and demand for consumer goods falling to a seven-year low. But Gupta remains unperturbed. “We are successful because we punch above our weight. We are an insurgent company and the trick is how to become a scaled insurgent for the long term,” says Marico’s managing director and CEO.

Marico is among a select group of Indian blue-chip companies to have seen double-digit revenue growth and return on capital employed each year since 2009. It enjoys a stable market share for its flagship products Parachute coconut oil (53 percent) and Saffola (73 percent). One out of every three Indians’ lives is touched by Marico, the company claims. In fact, it is No 1 or No 2 in at least 95 percent of the product segments it operates in, except deodorants and skin care.

“Leadership helps us focus on volume growth and gaining market share. We don’t focus on margins early on; they will come with scale, not just in product cost but also advertising and distribution,” explains Gupta.

The disruptor
Harsh Mariwala, founder and chairman of Marico, led the disruption by selling Parachute brand rigids (oil sold in round blue bottles) in the market in the 1980s. It was a time when coconut oil was sold loose or in tins as a commodity. A decade earlier, Mariwala had joined the family-run business, Bombay Oil Industries (Boil), which manufactured and traded in coconut and vegetable oils and chemicals. Marico, set up in 1990, later entered into an agreement with Boil to use the Parachute and Saffola brands, before acquiring them in 2001.

It was in these early years that both Mariwala and Marico safeguarded Parachute from rival Hindustan Unilever (HUL) which was flush with funds and pushing its own brand of hair oil (Nihar), apart from trying to buy out Parachute. Armed with new marketing campaigns, Mariwala not only defended his turf by increasing his distribution network on the ground but also won the corporate battle by buying out Nihar from HUL in 2006 for ₹216 crore. Gupta was new to Marico then, but a vital cog in the battle of the corporate giants. Gupta was part of the core team which decided on the Nihar acquisition at that time. “We went all out for this acquisition… ₹216 crore might have seemed as too high a price at that time, but it gave us significant presence across various regions. It definitely strengthened our long-term strategy,” says Gupta.

Marico has since successfully transitioned from a family-run commoditised business to an institutionalised FMCG giant.

At Marico, the process of handing over the baton was methodical after Mariwala decided to give up control of the day-to-day operations at the company. Gupta, formerly a marketing officer with ICICI Prudential in India, was just three years with Marico when he was made CEO of its consumer product business. Mariwala codified both his and Gupta’s roles in the new scheme of things. “Saugata and I wrote down what we thought our roles should be and then we compared notes before presenting it to the board,” says Mariwala, who is 24th on the 2019 Forbes India Rich List with a net worth of $4.6 billion (around ₹29,500 crore).

Mixed bag of acquisitions
Apart from Nihar, Marico picked up more brands along the way. It bought out Vietnamese ICP company’s X-Men brands in 2011 followed by Paras’s personal care brands Set Wet, Livon and Zatak from Reckitt Benckiser in 2016. In 2017, it made a strong presence in the male grooming space by acquiring Beardo from Zed Lifestyle and also South African hair styling brand Isoplus.

About 22 percent of Marico’s revenues comes from its global business, led by Bangladesh (46 percent share) and Vietnam (22 percent). Marico Bangladesh is a listed entity at the Dhaka and Chittagong stock exchanges. Its success there is a result of the market shifting from loose oil to branded coconut oil. Marico manufactures and sells Parachute, Parachute Advansed, Set Wet, Saffola and Livon brands there. In Vietnam, Marico continues to grow through personal care and male grooming X-Men products and Thuan Phat sauces. Marico’s expansions into the Middle East, South Africa and Egypt, however, have not met with the same success. Its share of the Middle East and North Africa markets—an organic expansion where Parachute and its value-added brand extensions are sold—has more than halved from 33 percent in FY10 to 15 percent in FY19. South Africa also cuts a sorry figure, with an 8 percent share, more than 12 years after Marico acquired the Caivil, Black Chic, Hercules and Just for Kids brands. “It has been difficult to make money [there]”, admits Gupta, alluding to slow demand for consumer goods and high inflation in those regions.

Gupta, along with Marico's Chief Operating Officer Ashish Joshi (who also heads the Africa and Middle East businesses), will need to take a tough call soon. “Mergers and acquisitions cannot be a substitute or escape button for organic growth,” says Gupta.

Tough calls
The CEO concedes that the company won’t aim to make so much money that the profit pool becomes attractive for others. “We ensured that for Parachute… it is unprofitable for others to enter,” says Gupta. But he needs to stay on guard. Parachute sales fell by 1 percent in volume terms and 4 percent in value terms in the September-ended quarter, owing to supply chain disruptions due to floods in several Indian states. Marico’s total revenues were also flattish, down by 0.4 percent year-on-year in Q2 FY20.

Marico is in the process of determining fresh pricing for Parachute to make it attractive for regular users who [in a weak demand environment] would have switched from branded to cheaper, unbranded products. 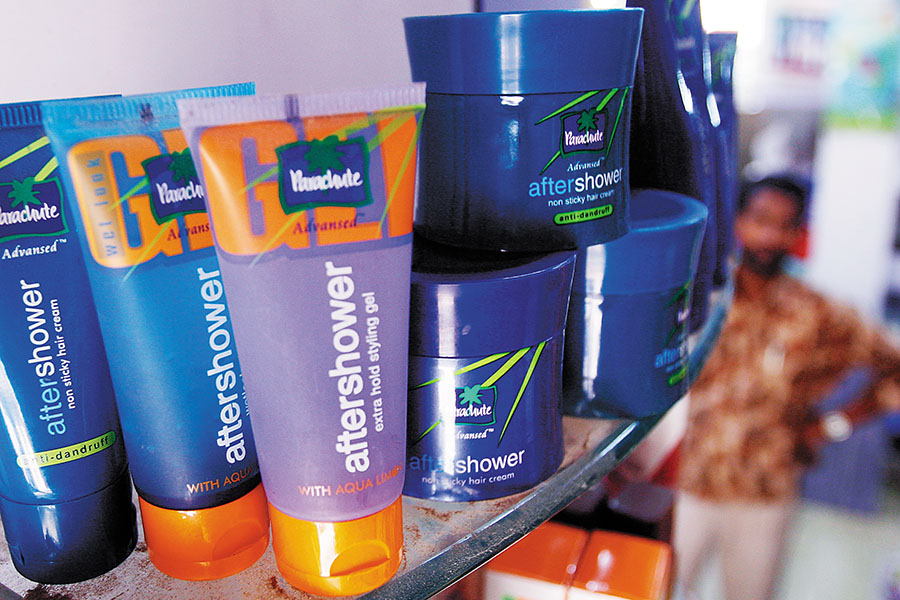 Rural demand was most hit in the North and East India regions, where the company is a bit “under-indexed”. But this is also the region where Marico’s value-added hair oils (Vaho)—Parachute Advansed Beliphool, Nihar Naturals Shanti Badam Amla and Parachute Advansed Extra Care—have a stronghold. The impact on Vaho was sharp in the September-ended quarter, with zero volume growth and a 4 percent fall in value growth.

Gupta says the current consumption slowdown is neither cyclical nor structural. It is “temporary” and he hopes to get Marico back to mid-single-digit growth in the second half of the fiscal (October 2019 to March 2020) in India. Marico could clock at least 8-10 percent constant currency growth in the international business, he adds.

New drivers
Not wanting to make Marico a two-trick pony which is excessively dependent on Parachute and Saffola (and thus coconut and safflower oil commodity prices), Marico has been innovating aggressively. Besides the core segment—the basic model for growth, which has few but big innovations—Marico has two more drivers: Engine 2 (premium personal care, which includes skin care and male grooming brands) and Engine 3 (healthy gourmet foods such as Saffola Fittify power foods, Coco-soul spreads and crème oil).

A significant contribution to the availability of Engine 2 and Engine 3 is modern trade and ecommerce, including supermarkets. Engine 2 is also being sold through chemists and cosmetics stores while Engine 3 finds its way through specialty food outlets. “Much of this learning was after we acquired Beardo,” explains Gupta.

Marico is well-placed in the still-vastly-under-penetrated male grooming segment both in India—through Set Wet and Beardo—and overseas with Isoplus (South Africa) and X-Men (Vietnam). “There is no mass, broad spectrum (beard, hair care, face, body, skin care) player which participates in all segments of male grooming,” says Gupta, adding that Marico plans to strength its position there. It does not rule out “Beardo-type” small acquisitions in the coming years.

Rakshit Rajan, portfolio manager at Marcellus Investment Managers, says Beardo’s acquisition might not dramatically change fortunes for Marico. “It has helped it get a foot into the door [of male grooming],” he says. However, Ranjan adds that Marico could see a huge opportunity in the packaged foods space as healthy, well-packaged and safe foods continue to gain popularity. Marico’s recent innovation, Saffola Oats, has been growing and commands a 79 percent value market share. 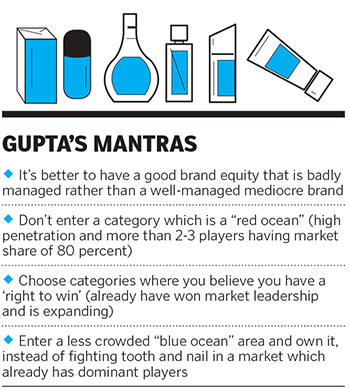 The foods segment is now worth ₹200 crore in sales for Marico and it intends to grow it to ₹500 crore. A similar growth rate is targetted for the male grooming segment. Marico has been high on innovation, but low on retaining focus to make the products a success. Gupta admits they need “scale in their innovations”. Niche products such as its Saffola fortified cholesterol management atta and diabetes atta mix could not be scaled up. “We realised that people are not willing to compromise taste for health. So create foods which are ideal for diabetics, but not diabetic food,” says Gupta.

Building legacy
Gupta, like Mariwala, is ready to experiment. The company is evaluating a scenario where private supply chain logistics agencies carry out supplies and distributors have zero stock. Gupta is one of the longest serving corporate heads at Marico and is looking to build a strong legacy, much lile Mariwala did in the 2000s. A group of at least 20 young leaders are being groomed under Gupta by evaluating how they execute tasks, their learning ability and the way they nurture talent, appreciate shareholder value and imbibe the owners’ mindset to their business.

Marico today is a lot more institutionalised than some of its competitors. This is what makes it one of the more attractive FMCG companies for sales and marketing executives to work with in India apart from its work culture and empowerment opportunities. Marico now has outside coaches to train its staffers and provide development tools to assess its young leaders.

Gupta wants to continue pressing the innovation button, alter distribution schemes for new growth engines, and embrace digital technologies in marketing. In those terms, in just over a decade, he has already created his own legacy.

Tweets by @forbes_india
Shaping the future of rural India with innovation and entertainment
India's Richest 2019: A giant leap for Mankind