Mbole (pronounced "em-bo-lay") developed around a quarter of a century ago in poor districts of Yaounde, the central African nation's capital. Around six years ago, it started to go mainstream, and it is now feted as a national music genre 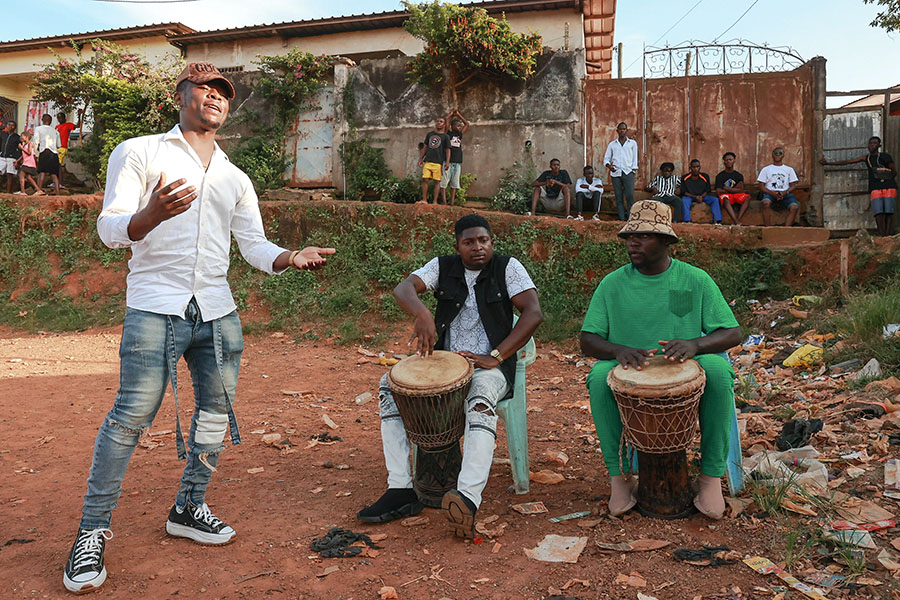 A group of young Mbolé artists gather in a stadium during an improvisation session in the Mvog-Ada district in Yaounde. Image: Daniel Beloumou Olomi / AFP

It began as a form of music chanted at wakes to comfort mourners—now it is part of Cameroon's cultural mainstream, and a powerful form of expression for its frustrated youth.

Mbole (pronounced "em-bo-lay") developed around a quarter of a century ago in poor districts of Yaounde, the central African nation's capital.

It began as a sort of back-and-forth at funeral vigils between a chanter, who would devise lyrics and sing them, and "responders," who sang the lyrics back and provided rhythm using buckets, saucepans or other implements.

"You would invite people around, you formed a circle, and you started to play to keep people entertained," said Etienne Koumato, a 24-year-old biology student who performs in a mbole group called League des Premiers and is signed to a specialist record label.

"At the start, mbole was stigmatised—people looked on it as gutter music, like rap," he said.

"But beneath the image, it was adaptable and it won people over."

Mbole spread to weddings and baptisms and other ceremonies, progressively becoming more sophisticated as instruments such as keyboards and the big West African drum, the djembe, were brought in.

Around six years ago, mbole started to go mainstream, and it is now feted as a national music genre.

"There's no TV or radio station which doesn't have mbole," said Yannick Mindja, who has made a documentary on the music's rise.

"We had Afro-beat, which came from Nigeria, but when you listen to mbole, you hear all the sounds of Cameroon," he said, pointing to traditional music forms called bend skin, makossa and bikutsi.

"Mbole is the grandson of bikutsi and the nephew of makossa, but when you hear it, you feel immediately Cameroonian," said Lionel Malongo Belinga, who performs under the name of Petit Malo.

Also read: A R Rahman: A sound in the making

Beneath the media success, mbole remains a versatile form of expression and is still very much rooted in poor neighbourhoods.

Poverty, drugs and insecurity are recurrent themes among its young performers, some of whom have almost iconic status in their neighbourhoods.

In 2016, Petit Malo recorded his first mbole hit, "Dans mon kwatta" ('In My Neighbourhood'), which depicted life in Nkoldongo, a rundown area of Yaounde.

The district is a warren where wastewater runs in rivulets down the narrow unpaved streets.

Many homes have no door but just a cloth to cover their entrance, hanging above some shoes, showing that people live there.

The sound of voices and the djembe bring neighbourhood youngsters running.

"Petit Malo is a good singer," said Herman Sone, a 15-year-old fan. "He sings about peace and hope, and lots of good things."

Female singers are also shouldering their way into a genre that "is still very male-oriented," said Jeanne Manga, 29, who, as performer Jay-Ni, has set up a girls-only mbole group.

Mbole is a fine vehicle for denouncing sexism, she said.

"In my lyrics, I talk for instance about men who invite women out and then expect sexual favours in return," she said. "We are not targets, and mbole gives us the chance to say so."

Tweets by @forbesindia
Looking for a property?
Researchers dig up secrets of 'self-healing' Roman concrete