A Himalayan Trail on Foreign Shores 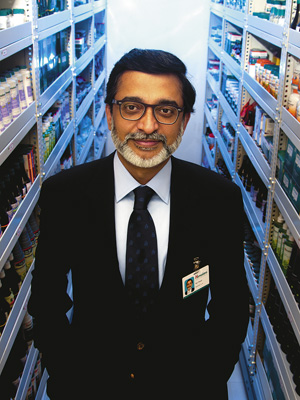 Ravi Prasad
Age: 51
Designation: Executive Chairman, Himalaya Drug Company
The Challenge: Take the company’s range of therapeutic and personal care products to overseas markets
How He Did It: He targeted doctors through articles in peer-reviewed journals and allowed customers to sample the products in supermarkets
The Next Goal: Double the company’s revenues riding on the strength of the international operations that is growing faster than India

Himalaya started building its international business in earnest in 2003. We had just finished work on a new logo and with a more youthful image we decided to increase our international focus.

At that time, overseas sales contributed 8 percent of revenues. Today, 40 percent of our total revenues—about Rs. 1,000 crore [Himalaya is an unlisted company]— come from global businesses and is growing at 37 percent a year. They are growing faster than the 24 percent growth rate we clock in India.

This, for me, is an indication that international markets are accepting contemporary, validated ayurvedic products. And, in many markets, our personal care products have been able to ride on the strength of our ayurvedic products.

In almost all the markets we serve, Himalaya has two product ranges—therapeutic ayurvedic products like Liv.52, and personal care products. Selling them overseas requires very different skill sets as in India our brand is known. Over the years, we have learned how to differently market these products and now have a fairly well oiled system in place. Setting it up wasn’t easy though.

The first difference is that with our therapeutic range, registration and certifications are the most important. With therapeutic products, we had been in some countries like Russia and some eastern European countries for a long time. In other cases, we had to start registrations from scratch. Not surprisingly they are a lot harder to obtain abroad than they are in India as the regulatory authorities want to be doubly sure.

This, for us, was often a time-consuming and costly process and we ended up spending a lot of money early on. I will not be wrong in saying that at that time we were the only Indian ayurvedic company to sell our products in Europe. For instance, in Poland, it took us four years to register Liv.52. During the process, we received a 37-page docket asking us questions. It was on the strength of those answers that we got the registration.

Post registration is when the hard work begins. In India, our name and brands are known, but in Europe and America it is very different. We have to work with doctors to get them to recommend our products as well as get consumers to try a system of medicine not known to them.

Early on, we chose to work on articles in peer reviewed magazines as we noticed that doctors tend to trust them the most. Magazines like Elsevier that is published in Ireland or the European Journal of Clinical Pharmacology that comes out of Switzerland have published articles on Himalaya.

Reprints of those magazines then become our marketing literature. This works out a lot more effective (and cheaper) than advertising. Working with doctors and explaining to them the virtues of your products is the only way to succeed.

With personal products, while we didn’t have to go through registrations, cracking open markets was as much of a challenge. Here also we laid down some ground rules. Early on, we had some overseas distributors who asked us to send them a consignment. “If it sells we’ll pay you. Otherwise you can take the products back,” they said. We refused to do business in this manner as it was a clear indication that the person doesn’t believe in our product. This meant that we couldn’t enter the South African market for two years.

So far, Himalaya hasn’t developed products specifically for certain markets. This has resulted in some problems. For instance, in the case of some personal care products, our customers in India and the Middle East felt the fragrance levels were fine, but in Europe and Southeast Asia they said they were too strong. We still stuck to the fragrance levels.

To make sure such instances don’t happen in the future we now have a global product development team that comprises of our people on the ground as well as partners like distributors. They test them in different parts of the world before we finalise the product. This ensures that we have only one type of product that is acceptable across the world.

Several Indian companies tend to stick to ethnic outlets when they take their products overseas. This is a sure-shot recipe for failure. Going to ethnic stores will never get your brand wider acceptance. With ethnic stores out, we tied up with major retailers to stock our personal care products. In the US, we are present at Wholefoods, with Watsons and Guardian in Southeast Asia and 37.6 and Spigla in Europe.

But getting products on the shelves is only half the battle won. Advertising costs trip up many companies. For a brand as small as ours, the only way our advertising can succeed is if we outshout our competitors, which would be too costly. Here, we adopted a slightly contrarian approach. Most markets do have some maintenance level of advertising. So we may buy a couple of prime time television advertising slots. There would be a few print ads every week. But that’s it.

And, of course, there is extensive sampling in any new market we enter. Sampling has been the key to Himalaya gaining acceptability. In fact, when we first went to talk to large retail chains, they would all ask us one question: How much are you going to spend on advertising? And we would tell them just give us some shelf space and we’ll see if sampling works. Now, there are some stores where we have an entire row of shelving dedicated to our products.

Tweets by @forbes_india
Billionaire's Playbook
Is Progress Slowing Down?