The RBI wants to see improved governance from private banks through proposed rules that limit the roles and tenures of CEOs. But will they work? 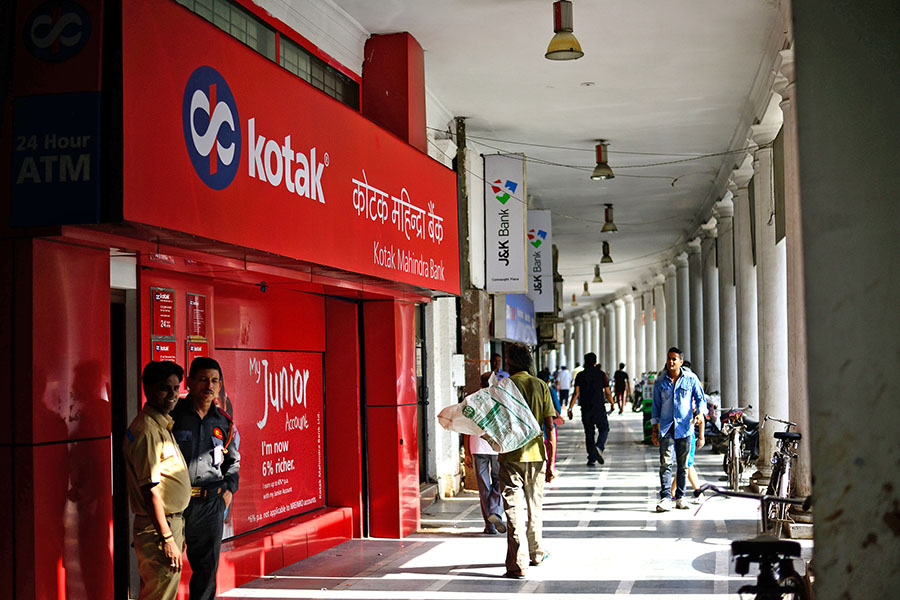 Kotak Mahindra Bank has evolved into a retail-focussed lender under Uday Kotak, and a core team that has been with the bank for over 20 years
Image Pradeep Gaur / Mint via Getty Images

In November 2018, three independent directors on the board of private lender Yes Bank—former telecom secretary Rentala Chandrashekhar, non-executive part-time chairman Ashok Chawla and head of the audit committee Vasant Gujarathi—resigned when the bank was in the midst of a crisis, with news of downgrades from rating agencies and struggles over finding a successor to promoter Rana Kapoor.

Chandrashekhar, in a rare instance, had explained the reasons for his exit, saying “he was unhappy” with the recent developments, as Chawla and Gujarathi had quit. Former banker OP Bhatt, an external member chosen to find a successor for Kapoor, had also quit. “These exits do not create a conducive environment, and the impact of all these developments is that I was not comfortable staying on the board,” Chandrashekhar had said.

Some very stern questions have been asked of those who led India’s private banks in the past three years. For ICICI Bank’s former CEO Chanda Kochhar it was alleged conflict of interest; for Axis Bank’s former CEO Shikha Sharma and IndusInd’s former managing director and CEO Romesh Sobti there were alleged cases of mis-reporting of non-performing assets (NPAs) while Yes Bank’s Kapoor has been accused by the Enforcement Directorate of money-laundering and kickbacks to his family members.

These cases point to lapses among the boards of these banks and also the lethargy that independent directors have shown in addressing some of these cases. Yet, the stand that directors such as Chandrashekhar and former banker Anil Khandelwal—who quit JM Financial Asset Reconstruction Company in 2018 due to governance differences with the board—took are exceptions.

The lessons of the past also challenge the theory that private banks have been better governed than some of the larger public-sector banks. The Reserve Bank of India (RBI) now plans to strengthen governance, reporting and accountability for private banks through a discussion paper issued in June. Based on the feedback that stakeholders receive by July 15, the new norms will come into effect in six months after being placed on the RBI website or April 1, 2021, whichever is later.

There are some key features that RBI plans to introduce, which are likely to change bank leadership, such as capping the tenure of the chief executive/promoter. In the discussion paper, it says: “It is felt that 10 years is an adequate time limit for a promoter/major shareholder of a bank as whole-time director or CEO of the bank to stabilise its operations and to transition the managerial leadership to a professional management. This will not only help in achieving the separation of ownership from management but also reinforce a culture of professional management.”

The decision to cap the term of the CEO has its basis in the longer-than-expected tenures of veteran bankers like HDFC Bank’s Aditya Puri and Indusind’s Sobti. The RBI does not expect this to be repeated. Puri is the longest serving chief of an Indian bank, building HDFC Bank into India’s largest private lender. Sobti, who retired earlier in March, helped IndusInd grow into a mid-sized bank through the strategy of three-year planning cycles. 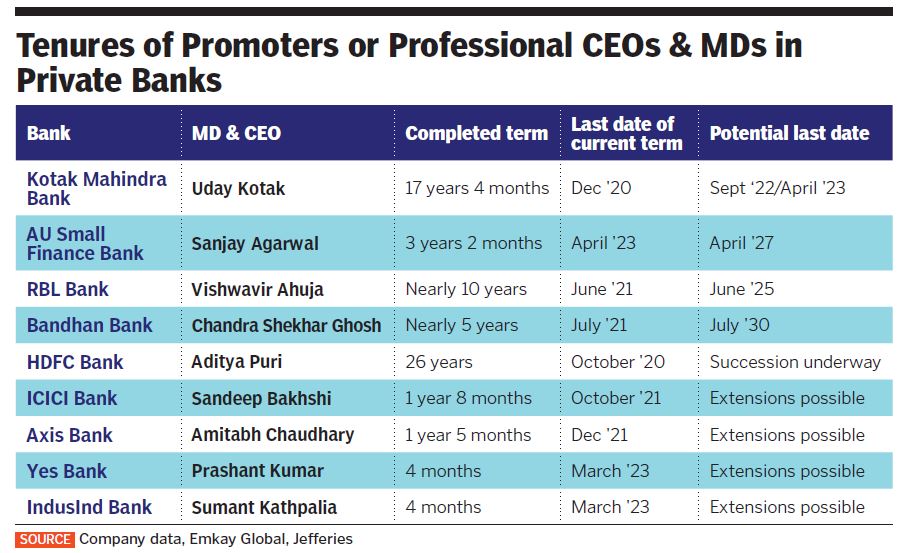 A successor to Puri, who is to retire later this year, is expected to be announced soon after approval from the RBI. In IndusInd Bank’s case, Sobti’s long-time colleague from his ABN Amro days Sumant Kathpalia, has replaced the former CMD. Kathpalia has already rejigged the top management and announced a deputy chief executive. In the case of Yes Bank, with the exit of Rana Kapoor and Madhu Kapur, the bank is led by Prashant Kumar, with a new board of directors.

It can be argued that Puri and Sobti have built a strong legacy, turning their banks into formidable institutions by the time they got their foot off the pedal. But there are some real concerns. “If an owner or a promoter has an extended term time, the RBI does tend to think: Is the board supreme or the CEO?” says a private banker. “The board is usually subservient to the CEO.” The regulator also wants to ensure there is sufficient churn at the board level. The experience of longer tenures is that if the CEO does not change, the churn at the board level also slows. 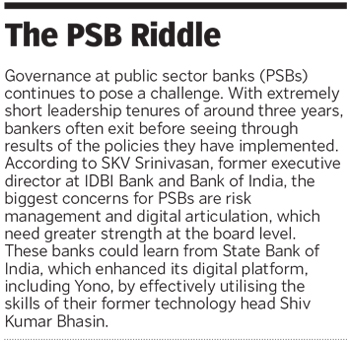 This is probably most prominent in the case of Kotak Mahindra Bank, a retail-focussed lender that has evolved from a leasing, hire, purchase and car finance company under the leadership of Uday Kotak. The core team at the bank has been with Kotak for over 20 years.

The new guidelines also say whole-time directors or CEO who have completed 10 or 15 years will have two years, or up to the expiry of the current tenure, whichever is later, to identify and appoint a successor. Kotak’s tenure comes up for renewal in December 2020, so he could have time to choose a successor by 2022. Gupta, who has been a director for more than 15 years, might be ineligible to become Kotak’s successor under the new rules, says Anand Dama, analyst at Emkay Global Financial Services.

In the case of others such as RBL Bank’s non-promoter managing director and CEO Vishwavir Ahuja, he could have time till 2025, as he has led the bank for nine years and 11 months. AU Small Finance Bank’s Sanjay Agarwal, the promoter and CEO, might have time till 2027, as the bank got its small finance banking licence in 2017, when Agarwal had completed just three years of his overall 12 years with the bank.

Among other private corporations, there have been cases of lengthy tenures for veterans such as Deepak Parekh at HDFC and AM Naik at L&T Group. But a bank—unlike a corporation—has a fiduciary responsibility to safeguard people’s money and the depositors’ interest is supreme for a bank, followed by others such as investors and shareholders.

The new proposals also place a huge emphasis on the role of the audit and risk committee of the board, which will be chaired by independent directors. “Overall, while diversified ownership is now a well-accepted norm for banks, stipulations with respect to governance gaps in various banks have been through inspections and incident management. The RBI is correcting this by prescribing minimum governance standards expected from banks,” says V Srinivasan, former deputy managing director at Axis Bank, and now an advisor to corporations.

The RBI will require independent directors to play a larger role in all critical matters. “To establish a certain order of governance in private banks, there is a need to have independent directors who are well equipped to speak their minds and assist the company to take informed and deliberated decisions,” says Ashvin Parekh, managing partner of Ashvin Parekh Advisory Services.

This becomes more convoluted in larger public sector banks or institutions, where the nominee director looks only towards the chairman, government nominee and RBI representative for directions, says Parekh, who has been an advisor to several financial institutions and has serves on the boards of ICICI Lombard and ICICI Securities.

While the RBI move is well intended, it will change the dynamics of responsibility in a bank. “Such a dramatic restructuring effectively truncates the responsibilities of the CEO and executive directors to only the business side of banking; the critical control functions will be the responsibilities of sub-committees of the board led by independent directors, who will now have a more important day-to-day operational role in the bank,” says Hemindra Hazari, an independent banking expert who publishes his writings on Singapore-based research platform Smartkarma.

While governance and accountability are factors being addressed, the concern is that the banking ecosystem is trying to find solutions of dealing with troubled lenders, including some small regional and state-owned banks.

The RBI will need to step in and intervene to prevent a contagion impact. The new guidelines are well intended but could create a new set of problems. Greater power and responsibility will mean independent power centres will emerge from heads of committees such as risk management and audit, alongside the CEO. This might mean new headaches.

Tweets by @forbesindia
Can the bubonic plague make a comeback?
Is Covid-19 accelerating automation? Lessons for the advent of AI