Instead of foreign shores, restaurants are turning to their own backyards in search of local, indigenous ingredients 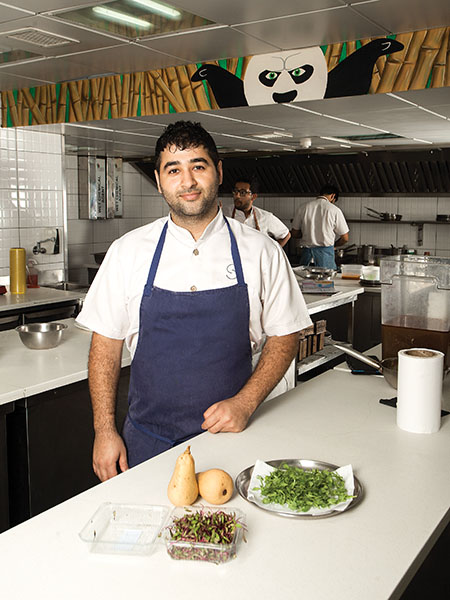 Prateek Sadhu has turned the menu at Masque on its head by using local ingredients
Image: Aditi Tailang

Prateek Sadhu is peeling green almonds at his Mumbai restaurant, Masque, from a batch he has just received from Kashmir. He then slices them and holds out the pieces. “The inside,” he explains, “is like gel.” It is, translucent and mildly citrusy. “Last year we made a broth with these, infusing it with three different oils. We are trying to see what more we can do.”

Trying to see what can be done with ingredients is one of the guiding principles behind the founding of Masque, which was 611 days old—Sadhu had been counting—when we met in late May. The other, bigger, guiding principle is putting Indian ingredients centre stage. “Around the globe, the perception of Indian food is about chicken tikka, or tandoori roti,” he says. “What people don’t know is the abundance of agriculture that India has.”

Sadhu is among a new breed of chefs and entrepreneurs focussed on ingredients that are Indian, sourced locally, and used in ways that are entirely new. Consequently, they are turning the concept of a menu on its head: Instead of first drawing up a menu, and then looking for ingredients—many of which could be imported, with high carbon footprints, and may have been sitting on shelves for months—they are first gathering the freshest ingredients they can get their hands on, and then conjuring a menu out of them.

“On a given evening, if I have 50 patrons, it is entirely possible that I serve one specific dish to 30 of them—because that is the amount of an ingredient I have—and serve something different to the other 20,” says Sadhu. That the kitchen can run out of an ingredient is a concept quite unthinkable in a standard restaurant.

It helps that guests at reservations-only Masque don’t get a menu to choose from. “At the end of the meal, which is about nine or 10 courses, we present our guests with a list of the food they have had,” says Sadhu. Food, which does not have standard categories such as starters or main courses, nor names such as risottos or roasts. Instead they will simply be ‘Pork/Pineapple’, or ‘Jaggery/Banana’, or ‘Katlam/Pickled Chili Butter’. 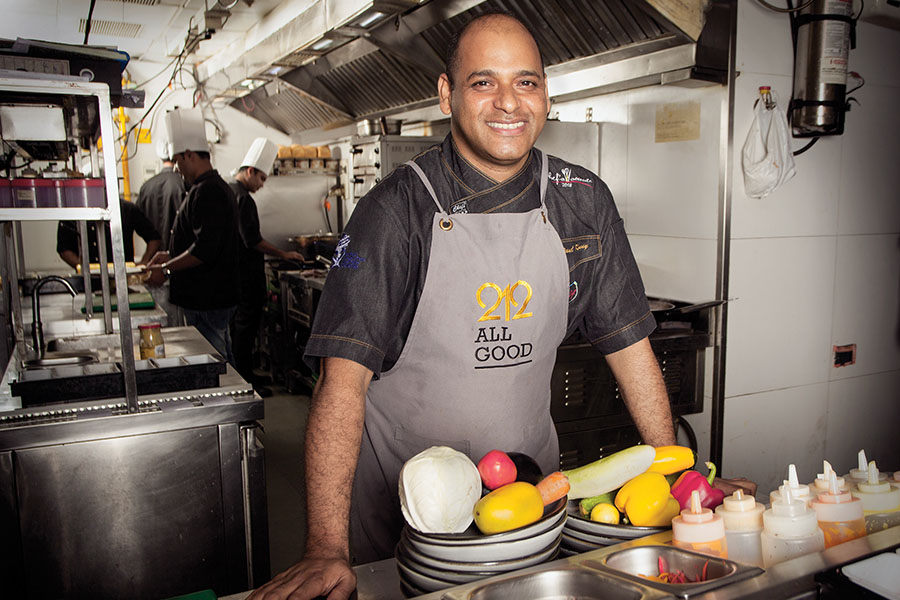 Paul Kinny says he had to unlearn a lot as a chef
Image: Aditi Tailang
While Masque might be taking the concept of locally-sourced ingredients to an esoteric level, there are others who are making it more accessible. Chef Paul Kinny, for instance, is happy to make comfort food for his guests at Mumbai’s 212 All Good, because, he says, it is something that guests can relate to. “Take the burger, for example,” he says. “We did a component-breakdown of the burger, and researched on how to make each component clean. So, the bread is gluten-free, the mayonnaise is made of tofu, and the fries are of sweet potato.” What you get is satisfying and familiar food, but with none of the associated guilt.

Kinny admits that to achieve this there was much from his 25 years as a chef that he had to unlearn, and a lot that he had to learn. Before his restaurant opened in March 2017, there was a six-month period of experimentation during which they created new dishes from scratch.

Almost all dishes on Kinny’s menu are gluten- and lactose-free—those that are not are labelled accordingly—and are made from locally-sourced ingredients. Mangoes, for instance, come from Palghar in Maharashtra, coffee from an estate in the Hubli district of Karnataka, chocolate—with 89 percent raw cacao—from Puducherry. Even the miso paste and adzuki beans—typical of Japanese cuisine—come from a Japanese community that has settled in the foothills of the Himalayas in Uttaranchal.

The Himalayas is also where Sadhu finds his inspiration, at least partly because he is from Kashmir. “I love the mountains. So that decides what I cook,” he admits. So, “dandelions, sorrel, mallow leaves… lots of greens during the spring and summer seasons that grow in the Himalayas and Kashmir, which we are trying to focus on,” he says. Then, there is sea-buckthorn, growing wild in Ladakh’s Nubra Valley, which is foraged over a couple of months. “We will get about 100-150 kg,” which is then made into sorbet.

Guests often come back for a dish they had had a few months ago, but are politely told it is no longer available. “We tell them that we have something new this season,” says Sadhu. 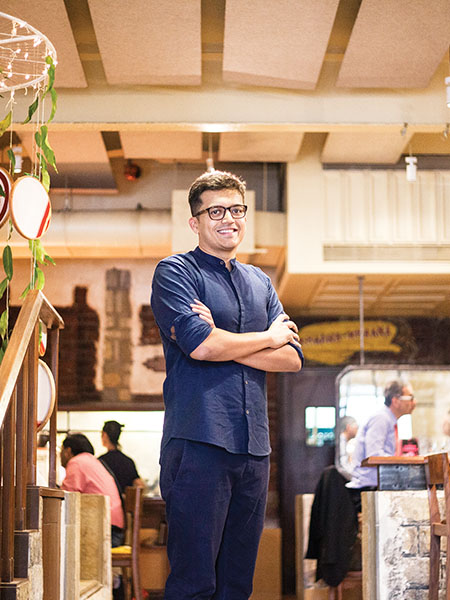 Following a similar philosophy is Yash Bhanage, founder and COO of The Bombay Canteen, started in February 2015. “Guests will start becoming aware of why we don’t have the same dish from a few months ago,” he says. “Expectations, too, will change.” So, in winter, he serves pink guava tart, while in summer it is kairi (green mango) tart.

But developing new dishes with new ingredients, Bhanage says, is a challenge, especially since the same ingredients can look and taste different in different seasons. Rat-tail radish, for instance, is green in summer, and purple in winter. “Apart from getting suppliers from whom you can source the ingredients, you need someone who has knowledge of local ingredients,” says Bhanage.

He gives the example of moras, a leaf that grows wild outside of Vashi, Mumbai. A tribal community forages these leaves, a small quantity, for their own consumption, and now Bhanage has included it in his menu—as a garnish on ‘Bhutte ka kees’, which is fritters of grilled and mashed corn. The leaves—short and thick—have a salty tang, a rarity in nature.

Other examples of indigenous ingredients that Bhanage uses are Bandel cheese—a soft, smoky cheese immersed in water—from Kolkata to stuff chilies with, a local variant of muskmelon, black rice from Tamil Nadu, and Topli paneer, which is part of Parsi cuisine. “Instead of using lemon, which is foreign to India, in our cocktails, we have come up with a local substitute, which is a mixture of pineapple and star fruit,” he says. 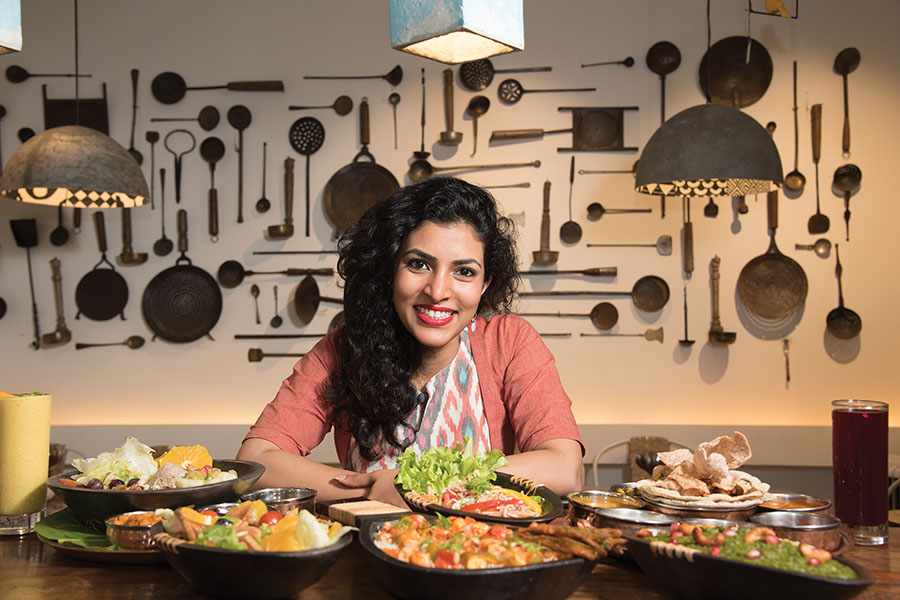 Reiterating the challenges of using local ingredients is Anvitha Prashanth, who started the Go Native restaurant and retail space in Bengaluru last year. Having experienced farmers’ markets in Berlin, while working there, Anvitha wanted to “connect people with those who grow our food”. There are two important factors to doing this, she says. “One is to have local produce that has a low carbon footprint, and second is to have organic produce.”

Go Native adds a contemporary twist to age-old preparations. So, for instance, ragi, a staple of Karnataka traditionally used to make ragi mudde, is now used to make pizza bases. “I would not expect people of my generation to like the way ragi was used earlier. But I wanted to incorporate that flavour,” she explains. Ragi is also being used to make Halubai, a sweet dish usually made of rice. Similarly, banana flower is now used to make rotis, while jackfruit is used in coconut milk pudding.

With one outlet at Jayanagar, and a second one coming in Indiranagar, Anvitha is planning a larger outlet in Whitefield, on a 1-acre land, where she will also be including farming. “I want it to be like a community space” she says.

Local ingredients is also what Saurabh Patwardhan turned to, when he started Kimaya Brewing Company in Pune last April. “I always wanted to become a microbrewer after tasting local beers while I was studying in the US,” says Patwardhan. “When I returned to India in 2010, the only good microbrewery was Doolally [in Pune],” he says. So he travelled around the Konkan and Vidarbha regions of Maharashtra in search of indigenous ingredients that could replace imported malted barley.

That is when he came across buckwheat, grown by tribal farmers in Ahmednagar. “The grain has a citrusy flavour, and the beer is very mild,” he explains. “We also made a mango cider this year, with mangoes from Sindhudurg.” A 1,000 litre batch of the cider was sold in 20 days and has become Kimaya’s highest-selling product.

Patwardhan will soon set out again in search of another local produce—kokum this time. “We hope to have kokum beer soon,” he says.

There was a time when running a posh restaurant meant serving imported food. But as the world wakes up to the environmental and social costs of hauling shiploads of produce across the planet, those times have changed. Accompanying this is also the belief of a new generation of Indians who, instead of blindly emulating the mistakes of the West, are learning from them, and have enough faith in their own traditions and flavours to put them centre stage.

Tweets by @forbes_india
Today's leaders require a new sense of self
Rupee may see more pain ahead: Analysts