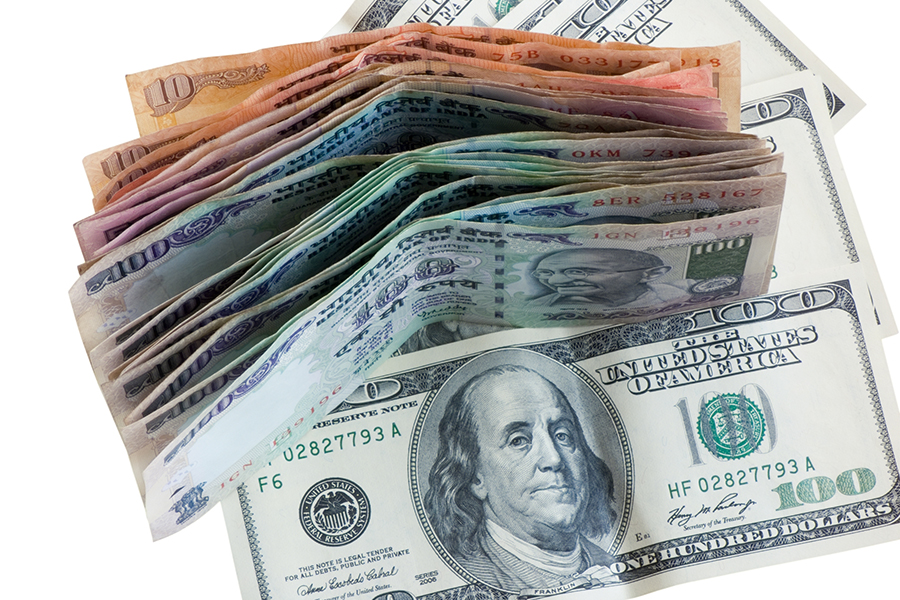 Image: Shutterstock
India’s rupee slid to a lifetime low of 69.09 against the dollar in morning trade Thursday, hit by factors such as rising crude oil prices, the strengthening of the US currency and foreign portfolio outflows from the bond markets in recent weeks.

The Reserve Bank of India (RBI) is believed to have intervened by selling dollars through state-owned banks during the day, but analysts fear that this is unlikely to stem the downward slide for the rupee. The partially convertible currency – closed the day at 68.79 to the dollar.

The rupee is one of Asia’s worst performing currencies in 2018, having shed about 8.7 percent to the dollar, year-to-date.

"Oil prices are likely to remain firm. Also, the future rate action from the US Federal Reserve will have to be watched,” says economic analyst Vivek Kaul. The US Federal Reserve (US Fed) hiked its short-term interest rates on June 13 and at that time, indicated that there could be two more similar actions in the year. Rising interest rates in the US means an outflow of funds from emerging markets, such as India, towards less riskier assets.

The cumulative outflow of foreign funds in 2018 through equities and debt markets in India, was $9 billion, official data shows.

Other analysts also fear the rupee will further lose ground against the dollar in coming weeks. The Organisation of Petroleum Exporting Countries (Opec), at a meeting in Vienna, last week announced that it will start to increase its supply of oil, but reports of a power struggle between two Libyan national oil companies has once against raised uncertainty over the global supply of oil.

Navneet Damani, vice-president (research) at Motilal Oswal Securities says "the pain for the rupee is not over." Both Kaul and Damani agreed that the rupee could breach the 70-mark soon, against the dollar, but hesitated to call on a time frame.

"The unusual combination of a stronger dollar and high crude oil prices, India’s widening twin deficit and foreign fund outflows have contributed to the recent weakening of the rupee,” says Damani.

Kaul said that rising oil prices will obviously impact petrol and diesel prices and set them to rise further. The government has indicated that it will not cut taxes on petrol and diesel, but if oil prices continue to surge, rising fuel prices this could become a tough issue to tackle closer to the general elections in 2019.

The government levies an excise duty of Rs 19.48 a litre on petrol and Rs 15.33 per litre on diesel. Every rupee cut in excise duty on petrol and diesel will result in a revenue loss of about Rs 13,000 crore, according to a government estimate. Fiscal deficit for the current financial year will be maintained at 3.3 percent of the GDP, an official of the department of Expenditure with the finance ministry said on Thursday.


Fiscal deficit for the current financial year will be maintained at 3.3 per cent of the GDP, an official of the department of Expenditure with the finance ministry said on Thursday.