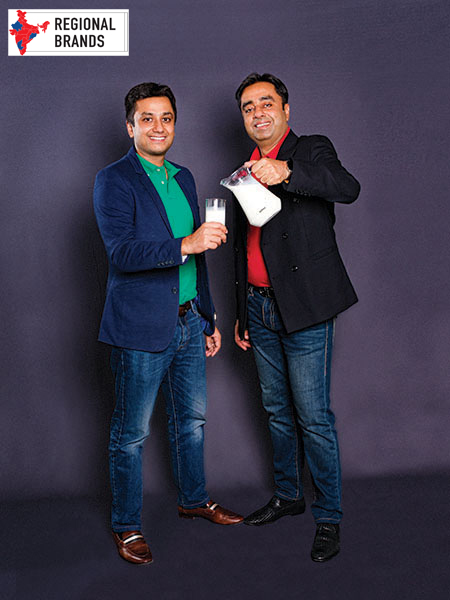 2003, Lucknow, Uttar Pradesh.  The engineer started with a bang. Born and brought up in Kaimganj, some 230 km from Lucknow in Uttar Pradesh (UP), Jai Agarwal went to The Scindia School in Gwalior, completed his graduation from the DY Patil College of Engineering and joined the four-decade-old family business of tobacco in 2001. His diverse educational background egged the third-generation entrepreneur to explore and stay out of the comfort zone. “The true method of knowledge is experiment,” he underlines, quoting English poet William Blake. “I stayed true to the belief.”

Two years later, in 2003, Jai boldly undertook his maiden experiment. Gyan, a popular dairy company in UP in the 90s, was going through a turbulent financial patch and the owners were scouting for an external partner. Jai expressed an intention to his family of carving out his own path and decided to dabble in a business about which he had not knowledge, experience or expertise.

About 12 months later, “it bombed,” Jai recalls. The dairy company, he underlines reasons for the flop show, was in heavy financial distress. Constant hounding by a clutch of lenders and a battery of banks made matters worse. The company couldn’t stabilise, the young entrepreneur had his first learning, and he went back to the family business of tobacco. A year later, Jai’s younger brother, Anuj, finished his graduation from Delhi University’s Hindu College and joined the business. During the same time, in 2004, the family business came under intense pressure from a clutch of local tobacco players who played price warriors. The brothers devised a new game plan, launched a slew of products, expanded retail footprint and regained market share by 2007.

Call it serendipity, but Gyan [meaning knowledge in Hindi] came back into the lives of the brothers. They bought it after the company failed to clear its loans. “We had wanted to start a real estate project,” confesses Anuj. The prime location of the factory and the vast area tempted the brothers to dabble in real estate. But the idea got nixed, and the brothers decided to try their luck with the dairy business again. Their father, though, disapproved of the idea, reminded the duo of the 2003 failure, and refused to fund the project. On an emotional front, he didn’t want his sons to stay away from him. The grandfather, interestingly, backed his grandsons to the hilt.

Eventually, the family agreed. But the consent came with a rider. “Come back if the project fails, and no more experiments after that,” was the stern warning from the father to his sons. The duo got some money from the family, and Gyan started its second innings in 2007.

The brothers had a fairy-tale beginning. The gains, however, were less to do with their brilliance and more to do with the commodity boom for two years starting 2007. Gyan started with milk powder, focused on institutional businesses, and made loads of money with its B2B bet. Then, towards the end of 2008, US-based financial services firm Lehman Brothers collapsed, the commodity markets crashed, and Gyan found itself in a fix. In order to cut heavy dependence on commodities, the brothers now decided to steer the company towards B2C, and rolled out dairy whitener and ghee. Heavy investment was made in a dairy whitener plant, no stone was left unturned to spread awareness about the new dairy hero from the cow belt, and Lucknow was painted red.

The plan misfired. Dairy whitener failed to take off, and ghee was not the flavour of the season. The brothers continued with the institutional part of the business to keep running the show. Two years later, in 2011, came another opportunity. Two big national dairy players were looking for a plant in Lucknow to expand operations. The Agarwal brothers sniffed an opportunity, set up exhaustive infrastructure to process liquid milk and inked deals with the dairy majors. Again, the plan didn’t work out. “Both backed out at the last moment,” recounts Anuj. The brothers had invested heavily in the project, and the no-show was likely to snowball into a major crisis.

They decided to take a stab at the consumer business again. The brothers rolled out fresh milk packs. Just a month into the business came another hurdle. Unlike other players who procured milk from the cattle-rich western part of the state, Gyan focused on the eastern side. “Eastern UP fell on the blind spot of all players. So this was a virgin area,” says Anuj, explaining the reason for reaching out to dairy farmers in Bahraich district, north-east of Lucknow. 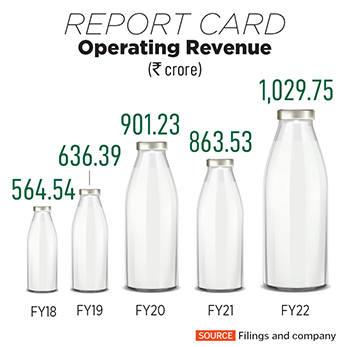 If the thought process was distinctive, the approach was disruptive. For every litre procured, the brothers offered ₹40, double the market rate in the state. Farmers were initially elated, but after a month, as payment day approached, they became anxious. Somebody paying double the market rate was too good to be true. On the payment day, they blocked all the routes around the village. “They thought we won’t pay the money and run away,” says Anuj with a laugh. All dues were cleared, and after a few months, their nerves settled. Business started booming, the brothers added curd to their product offering, which turned out to be another blockbuster. Back then, around 2,000 kilos of curd was sold by all players in eastern UP. Over a decade later, the dynamics have changed. “Today, we sell 3 lakh kilos per day,” claims Jai.

A combination of other factors also helped the brothers in scaling the business. First, the per capita consumption steadily increased over the last decade. Second, consumers increasingly gravitated to branded products and the unorganised segment shrunk. Third, the state cooperative dairy player, which happened to be the biggest milk player in UP, was on a rapid downslide. Around the same time, milk goliath Amul was locked in a fierce market share battle with Namaste India, a regional dairy brand from the makers of Ghadi detergent. “All were busy. Nobody noticed us,” smiles Anuj. 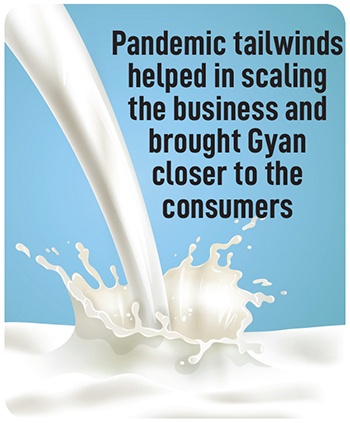 The brothers expanded their milk empire in eastern UP. Hyperlocal sourcing of milk, working closely with over one lakh dairy farmers and building a business of animal feed along with the dairy venture resulted in better quality of produce, which gave Gyan a massive edge over the big players. “Last year, we crossed ₹100 crore in cattle feed,” claims Anuj. In fact, pandemic tailwinds helped in scaling the business and brought Gyan closer to the consumers. The brothers rolled out an app for home delivery of milk and other products. “We do over 2.5 lakh home deliveries every month,” he claims.

In fact, the last few years have been transformational for Gyan. The dairy company, which started with skimmed milk powder and ghee, now has a product portfolio comprising milk, skimmed milk powder, butter, ghee, paneer (cottage cheese), curd and animal feed. The revenues have jumped from ₹564.54 crore in FY18 to ₹1,029.75 crore in FY22. While milk makes up 37.21 percent of sales, skimmed milk powder’s contribution stands at 21.33 percent, followed by ghee and butter at 20.31 percent and 7.72 percent respectively.

The retail footprint, too, has galloped. Gyan Fresh Stores, company-owned and operated exclusive retail outlets, are spread across 52 locations in Lucknow and Kanpur in Uttar Pradesh; Gyan Select Stores, owned and operated by franchisees, are spread across 14 locations in Lucknow; the products are available at 20,000 retail stores, and the company claims to process over 11 lakh litres of milk every day. 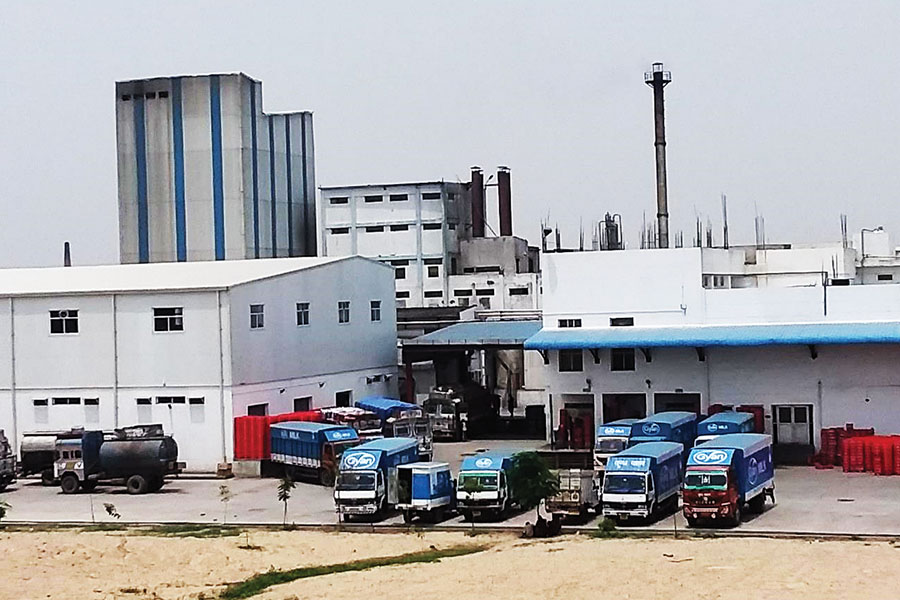 Gyan Dairy has two plants, the main one (above) in Lucknow and another in Barabanki district

Gyan’s success, reckon marketing and branding experts, lies in its drawing of geographical boundaries of operations. “The company is playing to its strength,” says Ashita Aggarwal, marketing professor at SP Jain Institute of Management and Research. When a company born out of eastern UP starts to focus only on eastern India as its area of expansion, then it is adding momentum to its growth.

Also read:  Regional Goliaths: Why local brands are happy in the kingdoms of their making

“The core is in sync with the new areas of operations, which provides a better control,” she says. The move to stay away from taking the bigger players head on and roping in professionals from companies such as Nestle also underlines its intent to build a sizeable and sustainable footprint. “If one can become a ₹1,000-crore company only by focusing on one part of the state, imagine the potential if one fans out across the state,” she adds. What they do need to keep in mind, though, is a sharp focus on quality. “After all, this is what has got them consumer stickiness,” she says.

The brothers, on their part, have learnt their lessons in playing the quantity game. The temptation to widen the reach, Anuj recalls, made Gyan play price warrior in milk powder and a few products. But whenever they played the mass game, quality took a hit. “There will always be a price warrior, but we don’t need to play that game,” he says. Gyan’s unflinching focus on quality, he stresses, has made it a popular brand. “Failure is the biggest teacher, and source of knowledge,” he says. Well, the brothers are learning, unlearning, and accumulating gyan!

Tweets by @forbesindia
Your next fragrance could be made from upcycled elements
Bestseller or dark horse: Who will win the 2022 Nobel Literature Prize?