Rajkot's Gopal Snacks makes ready-to-eat packaged snacks across seven plants in Gujarat, Maharashtra and Rajasthan, and is the second biggest player in the segment in Gujarat after Balaji 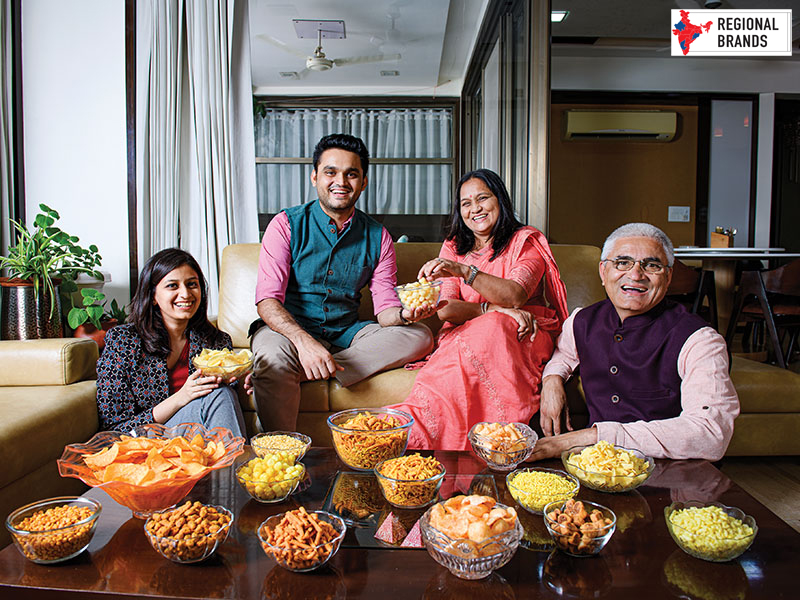 Rajkot, Gujarat, 1994. “Jyada paisa kamana hai to daam nahin business badao [if you want to earn more, then expand your business, don’t hike prices].” This priceless lesson from his father started haunting Bipin Hadvani. It was 1994. The second-generation entrepreneur, who migrated from Bhadra village to Rajkot city after completing his schooling in 1990, had co-founded a snacks business. “Jo khate ho wahi khilana [whatever you eat is what you must sell]” was another golden nugget from his father, which had been ingrained in Hadvani’s psyche. Four years later, he was itching to free himself from the joint venture and go solo.

In fact, freedom is what the young boy always cherished. After finishing his school, his father gave him the freedom to take a call on higher studies. College, not surprisingly, was the last thing on his mind. Call it how he was unconsciously groomed by his father for the life of an entrepreneur, Hadvani was always fascinated with the namkeen business that his father used to run from a petite shop in his village. The traditional Gujarati snacks were made at home, his father would load the stuff on his cycle and pedal across villages to sell the products. Whatever little time was left after retailing was spent at the shop. “I used to help him,” recounts Hadvani, who wanted to start his own business.

In 1990, he decided to move to Rajkot to scout for bigger business opportunities. His father thought the young lad was joking. “He gave me ₹4,500, and knew that I would come back after exhausting the money,” he smiles. Hadvani, though, disappointed his father. He stayed back, and joined hands with one of his relatives, and started a small namkeen venture in 1990. The local brand made heady progress over the next four years.

What, unfortunately, also grew during the same period was a widening chasm between the partners who had contrasting business styles. Hadvani was aggressive, believed in scale, wanted to have a wider product bouquet and vehemently opposed any move to beef up revenue by hiking prices. “Jyada paisa kamana hai toh business badhana hoga,” he always suggested. After four years, the partners decided to amicably part ways. Hadvani’s share came to around ₹2.5 lakh; he bought a house and started Gopal Snacks in 1994. This time his wife—Daxa—became his business partner. The duo began manufacturing from their house, and the ‘zero to one’ journey started. “After four years, I was again starting from scratch,” recounts Hadvani, now 53. And Daxaben was among the top 100 wealthy women on the Kotak Wealth Hurun list of 2020, India.

The second innings was not easy. Though Hadvani had a rich experience in traditional Gujarati namkeen with his previous venture, Gopal was a new brand. Another problem was brand loyalty. Unlike Western snacks such as chips and pellets, where consumers are open to frequently experimenting by trying out new brands, users of traditional Gujarati snacks stick to the brands that suit their taste. Though Hadvani kept a sharp focus on quality, it was not getting reflected in sales.

The gritty entrepreneur went back to the roots. He started fanning out across Rajkot on his cycle, interacted with shopkeepers, retailers and dealers, got to know the pulse of the market, and didn’t increase the price of the products. Meanwhile, Daxa managed production from home. For four years—1994 to ’98—the duo religiously maintained the ritual. The results started showing as sales picked up. Buoyed by a steady uptick in demand, Hadvani bought land outside the city and set up a manufacturing plant.

The move backfired. Though production increased, the products started taking more time to reach the market due to the remote location of the plant. For a decade, he somehow tried to make things work but had to finally bite the bullet in 2008. The plant was shut, Hadvani took more loan from the banks and a small unit was opened inside the city. “We were under heavy debt. Setting up a new plant was the costliest risk I was taking,” he recalls, adding that the company also changed its name from Gopal Gruh Udyog to Gopal Snacks. 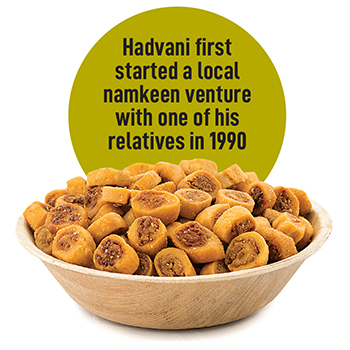 The founder got handsomely rewarded. Gopal touched the ₹100-crore revenue mark in FY12. Over the next five years, revenue leapfrogged over six times to touch ₹620.81 crore in FY17. Apart from reaping the benefits of the new plant, what also helped Gopal was a combination of factors. First, a battery of cottage, unbranded shops selling traditional namkeen started shutting shop. As cost of ingredients increased, smaller players started cutting corners, hiked prices and compromised on quality. The result was a drastic fall in their sales and market share.

Second, consumers started gravitating towards branded products. “This was one of our biggest pain points,” says Hadvani, alluding to the traditional practice of making namkeens at home. Unlike chips, snacks such as gathiya had been traditionally made by Gujarati families at home. Pushing such consumers towards packaged products and living up to their demanding taste were twin challenges that Gopal had to contend with during the formative years. 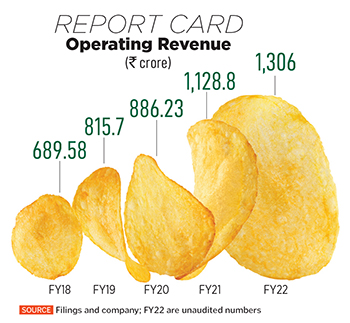 “Only a regional player can understand the nuances of different kinds of taste within a state or a region,” reckons Hadvani. The son of the soil had an edge over other players on this front.

From 2017 onwards, the snacks’ juggernaut has been rolling in full steam. In five years, revenue doubled and touched ₹1,306 crore in FY22. The footprint too expanded at a brisk pace. Gopal has seven plants across Gujarat, Maharashtra and Rajasthan; the brand, with over 60 products and 250 SKUs [stock-keeping units], is present across 11 states; has a network reach of 750 dealers and 7 lakh retailers; and also exports to over 70 countries. “We make 1 crore packs a day,” claims Hadvani, who added chips to his armoury two years ago. But why so late in rolling out chips? After all, the market is huge and there are players from Gujarat—Balaji in particular—that have built vast empire on the back of selling chips.

Also read: Prataap Snacks, to Delhi and beyond: Catapulting to a Rs 1,000-crore brand

The unassuming entrepreneur from the village dishes out a candid reply. “Sabne bola chips main paisa nahin banega. To maine nahin banaya [everyone said there was no money in chips, so I didn’t make them],” he says. 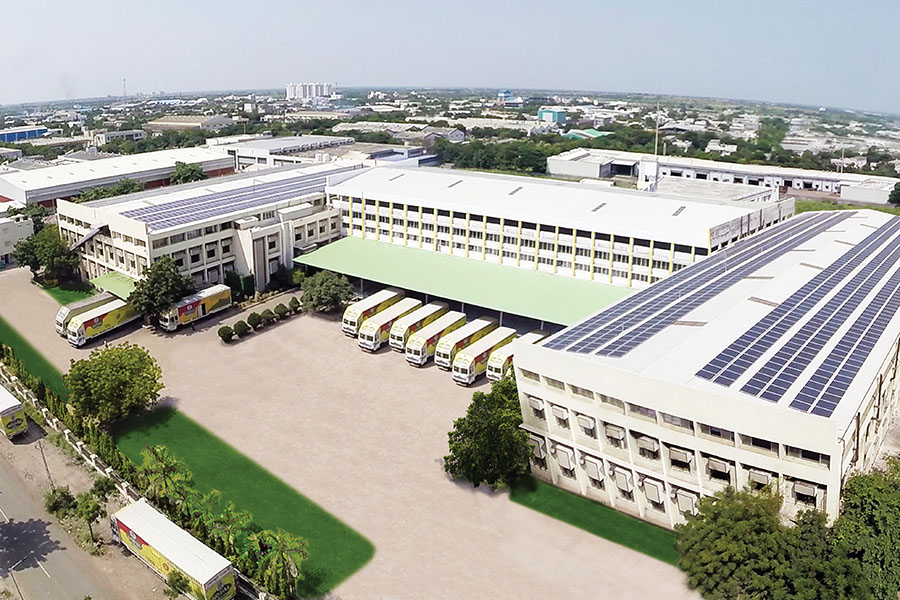 Gopal Snacks has seven plants across Gujarat, Maharashtra and Rajasthan, with over 60 products and 250 stock-keeping units

But then why did he start? “Because when I started making, I saw there was money,” he laughs.

The real reason, though, was competition. The big chips players in the region decided to get into traditional namkeen, and the easy way out was to feed the existing retail machinery with the products. Hadvani decided to return the compliment by rolling out chips. In fact, over the last few years, Hadvani fairly diversified Gopal Snacks into multiple products and categories such as Cristos (wafers), chips, corn snacks, pellets, spices, flour, and even washing bar! “Around seven percent of sales now comes from chips, and 80 percent of overall sales of Gopal is from Gujarat,” says Hadvani. “We rolled out chips at the right time.”

Too much of diversification, point out marketing experts, is likely to pose challenges for Gopal. Rajan Gahlot, assistant professor at Delhi School of Economics, explains tha over close to three decades, the company has done remarkably well by rolling out value-for-money offerings, increasing its dealership network, and geographical expansion in Maharashtra, Madhya Pradesh and Rajasthan, apart from enhancing production capacities. “To make a name and build a brand out of traditional snacks is never easy,” he says. What, however, Hadvani must keep in mind is that the core still is traditional Gujarati namkeens. Getting into too many unrelated categories might result in loss of focus. “You might chip away a few percent market share from the big boys of chips but what if your mainstay starts falling?” he asks.

Hadvani, for his part, prefers the wisdom of his father. “Jyada paisa kamana hai toh daam nahin business badao,” he signs off.