Everything you need to know about US-China Trade War

Answering the how, what, when, why of the escalating US-China trade war that has the potential to threaten global markets, including India 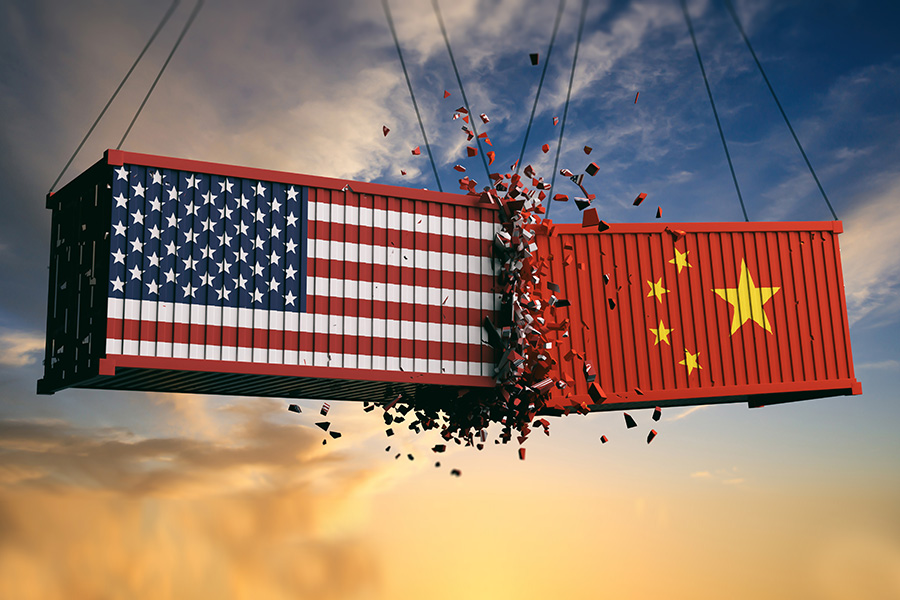 US has locked its horns with China, escalating into a full-blown trade war that could have ramifications on the global economy.
Image: Shutterstock

It is dubbed as “the worst trade war” seen in years. The US-China trade war has become a Game of Tariffs, a flippant to-and-fro by two of the biggest economies in the world that has the potential to cause ripples in the global marketplace. On Monday, China’s retaliatory measures on US imports worth $60 billion and other measures led the S&P 500 to post its biggest one-day fall since January 3. Here’s everything you need to know about the US-China trade war. Why it started?
US President Donald Trump, worrying about his country’s trade deficits and in a bid to strengthen the US economy, introduced tariffs on most of its trade partners. Tariffs increase the price of foreign goods, which directly encourages consumers to buy local, thus increasing the demand for local goods and reducing the outflow of capital from the country. How it started?
China, being US’s largest trading partner, the latter has the largest trade deficit exposure with the Asian giant. Trump has been vocal about his displeasure with China’s trade practices during his Presidential campaign, as with other trade partners too. He rode to the highest office on promises to counter unfair practices by China, with threats to apply tighter tariffs. So far, Trump has ordered tariffs – duty and taxes on products manufactured abroad – affecting its trade partners, like Canada, Mexico and the European Union. Among the worst hit was China. What followed?
January 2018: Trump ordered a Section 301 enquiry into Chinese Intellectual Property Theft. April 2, 2018: The US imposed tariffs on goods from all countries on January 22, 2018 and March 8, 2018. On April 2, 2018, China retaliated with tariffs of up to 25 percent on US products. July 2018: The US levied a 25 percent tariff on $34 billion worth of Chinese imports; China responded with tariffs on $34 billion worth of US imports. August 2018: The US released a list of $16 billion worth of Chinese goods to be subject to 25 percent tariffs. China answered it with 25% duties on $16 billion of US goods. September 2018: The US implemented 10 percent tariffs on $200 billion of Chinese goods which were to increase to 25 percent on January 1, 2019. China retaliated with duties on $60 billion of US goods.

US-China Trade War Current Situation
Until May 10, 2019, China was paying 25 percent tariffs only on $50 billion worth of goods and a lower 10 percent on $200 billion worth of goods. Trade talks between the two countries to quell the trade tensions fell through on Friday without reaching an agreement, and on May 5, 2019, President Trump tweeted saying that the US will raise its tariffs on all $200 billion worth of Chinese goods to 25 percent from the previous 10 percent. The US imported $539 billion worth of Chinese goods in 2018. As it stands, a 25 percent tariff is imposed on $250 billion worth of goods currently. Trump has also threatened to levy an additional 25% tariff on goods worth $325 billion. China’s retaliation: Responding to the increase in tariffs by the Trump administration, China, on Monday decided to retaliate by increasing tariffs on $60 billion worth of US goods, effective from June 1, 2019. China imported $120.3 billion of US products in 2018. So far, the country has levied tariffs on $110 billion worth of US imports. Trump and Chinese Premier Xi Jinping will meet at the G20 summit in Japan next month. The agenda includes trade war talks. Impact on US Stock Market
S&P 500 saw a record high a few weeks back but fell by 2.41 percent on Monday, its highest one-day fall since January 3. The main reason dragging the markets cited was China’s retaliation in the trade war. So far, in May, the market has seen a fall of 4.6 percent. Shares of companies like Apple, Boeing and Wynn Resorts, that see China as a large market fell by 5.8 percent, 4.9 percent, and 6.2 percent, respectively. Dow Jones Industrial average closed 617 points lower as it fell by 2.38 percent whereas NASDAQ composite index fell by 3.41 percent. Global Impact
Seeing the escalating trade tensions between the two countries, the International Monetary Fund (IMF) has commented saying that it could weaken global expansion. In its latest World Economic Outlook (WEO) report released on April 2, 2019, the IMF lowered its global growth forecast for 2019 to 3.3 percent from 3.5 percent previously. The IMF projects a decline in growth this year for 70 percent of the global economy, with US and China seeing sizeable losses. A global trade war could give way to higher prices of goods globally. Companies facing higher tariffs will push this cost onto the consumers, making goods across sectors more expensive to buy. Impact on India
Indian markets have a large exposure to the US and Chinese markets. Any impact on the global markets has a direct impact on the Indian bourses. On Tuesday (May 14), the BSE Sensex was trading down 61.88 points at 37,028 in early trade tracing the losses made in the Asian and other global markets. However, it recouped losses in later sessions -- the main reason: the BSE’s benchmark Sensex has lost nearly 2,000 points in nine consecutive sessions that ended in losses till Monday. If China doesn’t find a conducive market place in the US, it might sell to the rest of the world as a dumping ground for Chinese products. India – ranking among the top 10 trade partners for China – might be a major dumping ground for cheap Chinese products. IMF’s projections of the trade war’s impact on global growth rate will have impact India’s economic growth, with a direct impact on its GDP.

Tweets by @forbesindia
Passion around the clock
What's going on with India's automobile sector?