As Jet Airways flights got grounded on April 17, its founder's peers and aviation experts explain how his ego brought a set of problems to the beleaguered airline 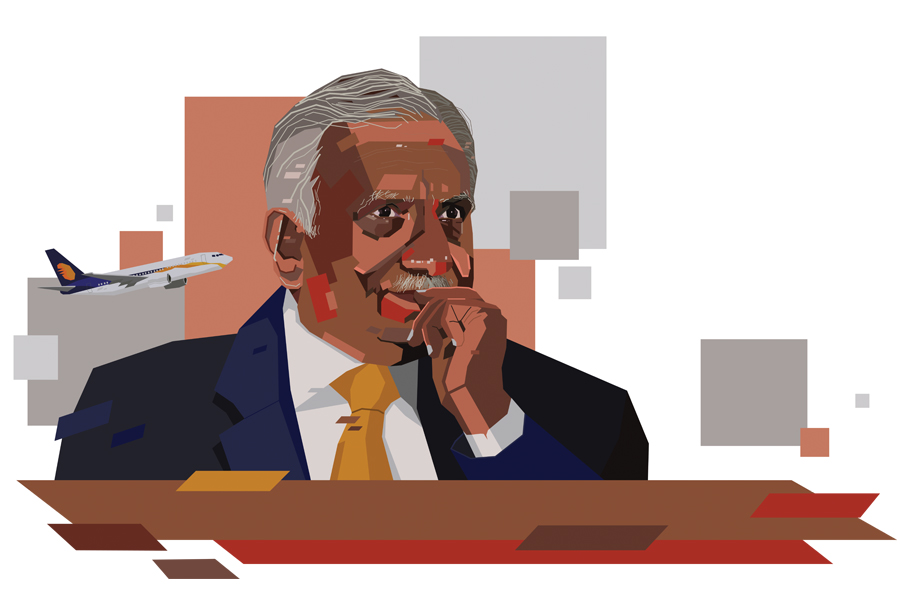 Tarsem still remembers Naresh Goyal vividly, although they last met in 1970. Sitting in his family-owned saree shop of 100 years in the alleys of Patiala, Punjab, the 73-year-old recalls how the young Goyal, three years his junior, was always yearning for more even as he was struggling to make ends meet at home. “There was something about him,” says Tarsem. “Back then, he used to say that he could even speak to the prime minister. He had self-respect and was honest. Even though the family experienced extreme poverty, they were principled in their work. Much of that was passed on from Naresh’s mother, Mayadevi, who held the family together.” Tarsem grew up with Goyal and his three brothers in Patiala after the latter’s family shifted to the princely town in the early 1960s. The migration was a result of Goyal’s father, Jagdish, suffering heavy losses in his gold business. “They had a huge jewellery business in Sangrur, a village close to Patiala,” says Tarsem. “But that ran into losses.” Goyal is the youngest of four brothers. He also had three sisters, about who not much is known. The brothers, however, found jobs in Patiala. Tarsem says the eldest, Mihish Kumar, worked in the electricity department, while another, Surinder Kumar, joined Goyal in his airline journey. The third, Rajinder Kumar, was a photographer and set up his studio, RK Studio, close to Tarsem’s old shop in Patiala. “His mother was the greatest influence in his life,” says Tarsem. “Even though they faced hardships, she never asked for help. She would buy fabric on loan from us and do tailoring work… the sale proceeds were used to repay us.” Seth Lala Charan Das, a relative of the Goyals and a prominent businessmen in Patiala, was of great help to them. “In Patiala, there is a saying that the business that you build won’t last beyond your lifetime or that it will at least collapse by the next generation,” says Arvind Trivedi, a chartered accountant, who was Goyal’s neighbour. “In the case of Das, the family business went down the drain. At one point, they used to own all the big theatres and factories in Patiala… today nobody knows where the younger generation has disappeared.” Patiala curse
Perhaps the Patiala curse has come to haunt Goyal decades later. Today, the 26-year-old Jet Airways, which he nurtured like a baby, has slipped out of his hands. He was unceremoniously booted out of his own company by lenders who plan to sell India’s oldest private sector airline. This was soon after Goyal approached them to restructure his debt—caused by relentless borrowing over the past decade—as India’s changing aviation sector, particularly the low-cost model, pulled the company into a downward spiral. Today, Jet Airways is sitting on a debt of over $1.2 billion, unpaid salaries, and has lenders lining up to impound aircraft over non-payment of dues. The airline has suspended its operations, its pilots and staff have threatened to strike work, and have sought Prime Minister Narendra Modi’s help in saving their jobs and the airline. Goyal himself bid for the airline after the lenders sought bids to keep it running, only to back out a few days later. An investor needs to have a net worth of ₹1,000 crore and another ₹1,000 crore to invest in Jet Airways, according to the bid document. Questions sent to Goyal’s office by Forbes India remained unanswered. “Goyal is the product of crony capitalism,” says Jitender Bhargava, former executive director of Air India. “All his life, he didn’t have a baptism by fire. Rules were tweaked to ensure that competition had a tough time while he kept building his airline. Over the past few years, market dynamics changed and that was a real test of his leadership. He was never leading the fight and that’s where he failed. Even today, amidst all the crisis, you don’t see much of him.” Taking flight
Goyal’s foray into the travel industry, by his own account, was an accident. He left his family behind in Patiala and moved to Delhi in the late 1960s to work in a travel agency floated by Das. It became his home and he even slept in the office on most nights. Soon after, Goyal was picked up by Iraqi Airways as a public relations manager. Between 1971 and 1974, he also served the Royal Jordanian Airlines as a regional manager where he became acquainted with route strategy, traffic patterns and operational plans. The entrepreneurship bug bit him. In 1974, Goyal set up his travel agency, Jetair Transportation Pvt Ltd, which represented the likes of Air France, Austrian Airlines and Cathay Pacific. 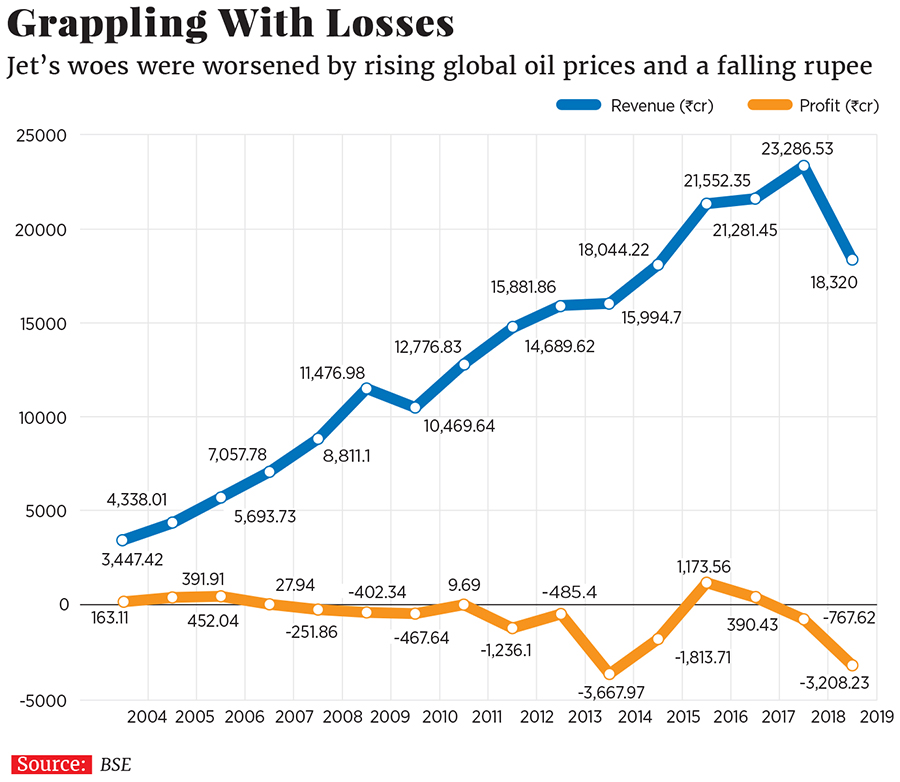 “He just didn’t read the writing on the wall,” says Bhargava. “The market was bad, and the low-cost model was gaining ground. He should have tweaked his business model to keep up with the times.” Jet in 2009 launched Jet Konnect, a low-cost arm, but running three different models was becoming tough. The company merged JetLite with Jet Konnect in 2012 before eventually merging Jet Konnect with the parent company in 2014. Slippery slope
By 2012, Jet was under intense pressure from IndiGo. As Kingfisher went bust, IndiGo turned out to be the biggest beneficiary. “IndiGo became aggressive and kept on adding capacity,” the former Jet executive says. “It had a low-cost structure with the sale and leaseback model, while Jet was struggling with debt. Whatever money it was making was used to service the debt.” In a sale and leaseback model, an airline buys an aircraft, sells it to a lessor and then leases the plane back. The model helps conserve cash, and also keeps the books debt free. IndiGo also controlled costs by running only one model, the Airbus 320. Rising competition, low fares and a high-cost structure meant that Jet needed to raise more money to sustain itself. “By 2011, Jet was in big trouble,” says Chalke. The government then introduced a policy that allowed foreign airlines to own up to 49 percent stake in Indian airlines. Goyal, who had resisted the entry of foreign airlines into India, was now at the forefront, seeking a change. “There shouldn’t be any doubt that lobbying from his end helped introduce the new law,” says Bhargava. Soon after the government changed its policy, Jet struck a deal with Abu Dhabi-based Etihad Airways PJSC to sell 24 percent stake in the company for ₹2,050 crore ($379 million). It was to help Jet reduce its debt, which stood at $2.16 billion on December 31, 2012. Much of that debt was raised for aircraft acquisition. In return, Etihad purchased three of Jet’s landing slots at London’s Heathrow airport and a 51 percent stake in its frequent flyer programme. “This transaction further strengthens the balance sheet of Jet and underpins future revenue streams, which will accelerate our return to sustainable profitability and liquidity,” Goyal had then said. However, the partnership with Etihad was keeping Goyal on his toes. “He was spending time on wresting back control,” says the former Jet executive. “He somehow felt he was ceding control and was worried about Etihad. For nearly 36 months after that deal, IndiGo kept dropping fares. It knew Jet would struggle to service its debt. IndiGo had better market share and was the price leader. Jet didn’t have the frequency of operations that IndigGo had to dictate fares.” Goyal’s insecurity, coupled with his lack of foresight, are to be blamed for the crisis, says Shukor Yusof, founder of Malaysian-based aviation consultancy firm Endau Analytics. “He has a huge ego… he could not trust others and hand over control… that has led to this situation. With the influx of low-cost carriers, having an experienced team could have helped identify problems and react. They didn’t react quickly and became complacent. That’s what caused the end of Naresh and the airline.” Hard landings
Over the past five years, particularly after Etihad become an investor, there were moments when Jet seemed to be back on track. In 2016 and 2017, the airline posted profits, primarily aided by bottomed out oil prices. In 2016, the company saw earnings over ₹1,000 crore. However, oil prices soon began to rebound. A dwindling rupee added to the woes. Since January 2018, Jet posted four consecutive quarters of losses. Plus there were allegations that Goyal was siphoning off money from the airline. 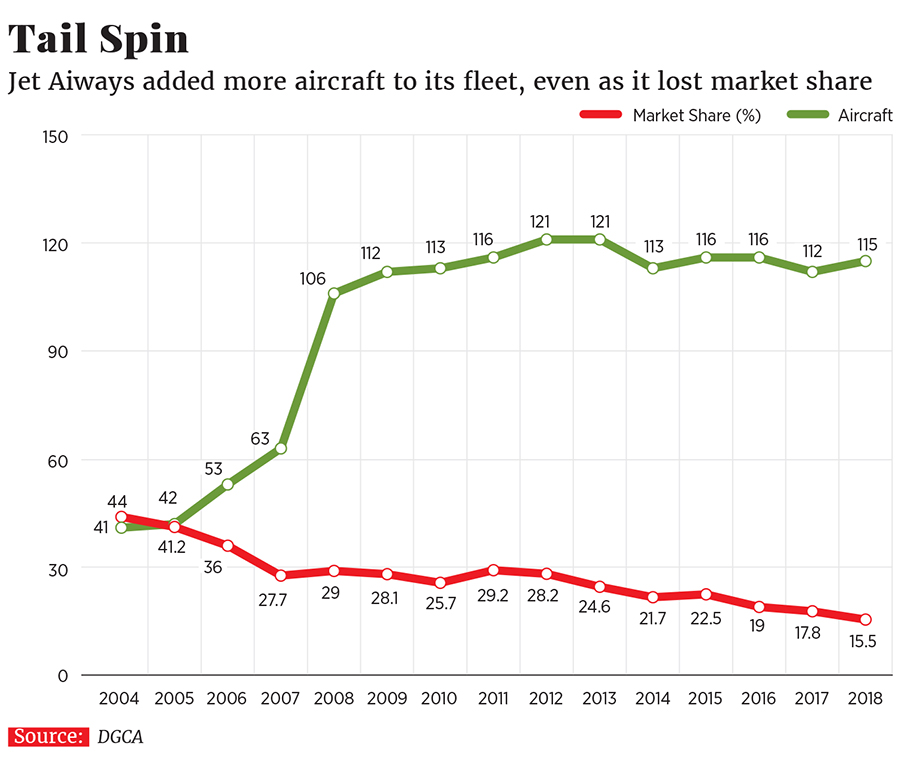 Jet’s financial loss during the first nine months of FY18-19 stood at over ₹3,000 crore, forcing the Mumbai-headquartered company to seek a debt resolution plan proposed by lenders led by the State Bank of India. The decision was aimed at paying employee salaries, loan servicing and aircraft rentals, after the company’s net worth had turned negative. As part of the debt resolution plan, lenders have acquired over 50 percent stake in the airline in line with a Reserve Bank of India guideline. It also booted out Goyal, his wife Anita, and two others from the board. Goyal approached Eithad and the Tatas to put in money into the beleaguered airline, but they asked him to step down. The airline’s entire fleet got grounded on April 17. “Karma has a strange way of getting back,” says Bhargava, referring to the fact that Goyal had helped create the 5/20 rule. “What is likely to happen now is that bidders are likely to buy the airline for its international operations. Whether it is Tata or SpiceJet, Jet has the best of the slots, and that is the only attraction” says the former Jet VP. Meanwhile, Jetair Transportation, the company Goyal founded in 1974, and in which he continues to be the largest shareholder, submitted a bid along with two global funds to buy Jet. But after strong protests from Etihad and TPG Capital, who reportedly said they would withdraw their bids if Goyal also bid for it, the estranged chairman decided to back out of the race. “There are many vultures flying around,” says Yousuf. “They will all want a piece of the pie. It is such a shame that a company like Jet had to wind up this way. As for Goyal, it’s perhaps time to retire quietly.” Those who know him say it’s unlikely that Goyal will hang up his boots without a fight. After all, he knows a thing or two about starting from the bottom.