Jobs will have to be created in the manufacturing sector: BNP Paribas's Manishi Raychaudhuri 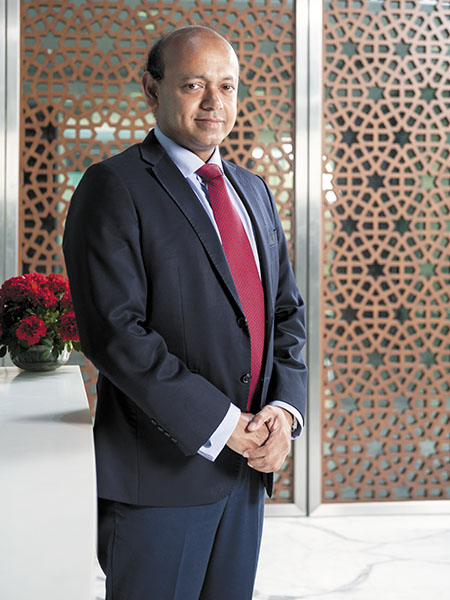 Manishi Raychaudhuri says oil could potentially be the disruptor in the near term
Image: Mexy Xavier

Despite the recent slump in global equities, which was heightened by concerns of a pending rate hike from the US Federal Reserve, Manishi Raychaudhuri, BNP Paribas’s Asia-Pacific head of equity research, believes that other central banks are unlikely to follow suit anytime soon. He remains bullish about India’s growth prospects in FY19. Edited excerpts from an interview:

Q. How do you see the global economy faring, in terms of stimulus across Western economies easing and oil prices moving up?
The Western hemisphere has probably recovered the most in terms of growth, particularly regions driven by consumption. Global consumption resilience is likely to be one of the biggest drivers of growth going forward.

The monetary stimulus that central banks were engaged in for the past few years is gradually declining. That said, there are still large central banks such as Bank of Japan and the European Central Bank (ECB) that are likely to keep the taps open for the time being. In Japan, we expect the negative interest rates to continue. The ECB will be tapering from September 2018, so for the next seven to eight months quantitative expansion will continue.

We must understand that most central banks respond [with rate action] to recovering growth. It clearly appears that Asian central banks are recognising that growth is improving. The best part of such growth acceleration is that it is not translating into inflation yet. We have seen modest inflation—in terms of producer price index in China and South Korea—which is actually a positive trend from the deflationary pressures seen in these countries earlier.

Q. How long before other banks follow the US Federal Reserve to tighten policy rates?
The US Fed has already taken the leap, and could hike rates three times in 2018, followed by one or two times in 2019. Until there is a serious signal of inflation spiking, we are unlikely to see any of the central banks go into a tightening mode anytime soon.

Q. What is the most disruptive factor that could derail global growth? Will it be geopolitical events or rising oil prices?
Oil could potentially be the disruptor in the near term, though not in the long term. Global demand for oil—possibly at its peak—could only decline or moderate in the long term. Energy intensity of various economies will come down. China and the Euro region have announced plans to do away with fossil fuel-based cars by 2030 and move to electric vehicles; it is a seriously aggressive change, from the perspective of changes to manufacturing strategies that are required.

In Asia, this move is still in its infancy, but is starting to catch up. Unless there are egregious geopolitical tensions, oil prices will quite likely not go up much from here. Even large oil importing countries, like India, therefore should not suffer too much in terms of expansion of their current account deficits and fiscal deficits.

Geopolitics and trade restrictions could be potential disruptors too, particularly for emerging markets, though we don’t believe we’re likely to see very sharp increase in protectionist trends. These concerns were completely brushed aside by the market in 2017.

One problem with India, though, is that the equity markets did well but earnings were pedestrian. Asia ex-Japan EPS moved up 15 to 20 percent last year, led by South Korea, with a 50 to 55 percent jump in consensus EPS. China caught on later. None of the other regions participated in the earnings bonanza.

“ One problem with India is that though the equity markets did well, the earnings were pedestrian.”

In India, demonetisation and GST drove down the economic cycle at a time when the rest of the world recovered. However, from a low base, we expect this GDP growth gap to narrow in 2018. For the 12 months to March 2018, we expect a pedestrian earnings growth of 7 to 8 percent (against the FY18 EPS growth consensus of 15 to 18 percent).

There is a justifiable expectation that disruptive economic measures will have a constructive effect over the long term. By Q1 FY19 we believe a pick-up earnings estimates should become visible, particularly for the banking, consumer discretionaries and industrial sectors. Already, in the Q3 FY18 results being reported now, we have heard encouraging commentary from companies in consumer staples, private banks and media.

Q. The government has been trying to address growth concerns through structural reforms. Will that solve the problem of jobless growth?
The first problem is structural. About 50 percent of the population is working in agriculture, but this contributes only 17 percent to the GDP. The task for the government is to take these people out of agriculture, mechanise the sector and bring them into industry.

Ultimately jobs in India will have to be created in the manufacturing sector, and for that to happen, a revival in the capex cycle is a pre-condition. Currently the capex cycle is being supported only by government-sponsored infrastructure projects, while private capex continues to be tepid, owing largely to low capacity utilisation prevailing across most industries.

Our analysis of capex plans of more than 3,000 companies indicates that private capex is likely to decline over 2018 and 2019, not just as a percentage of GDP or as a proportion of the companies’ revenue, but also in absolute terms. We are operating in an environment of 72 to 73 percent capacity utilisation. Unless this rises to 80 to 85 percent, corporates will not be keen to bring in new capacity.

Tweets by @forbes_india
The Singhs of ACG Worldwide: Capsule czars
India Inc to spend more on technology this year