Girish Mathrubootham on how to stay hungry amid a carnage

The poster boy of Indian SaaS is braving a brutal global tech meltdown and trying to keep Freshworks steady. What might come handy is turning deaf and building credibility 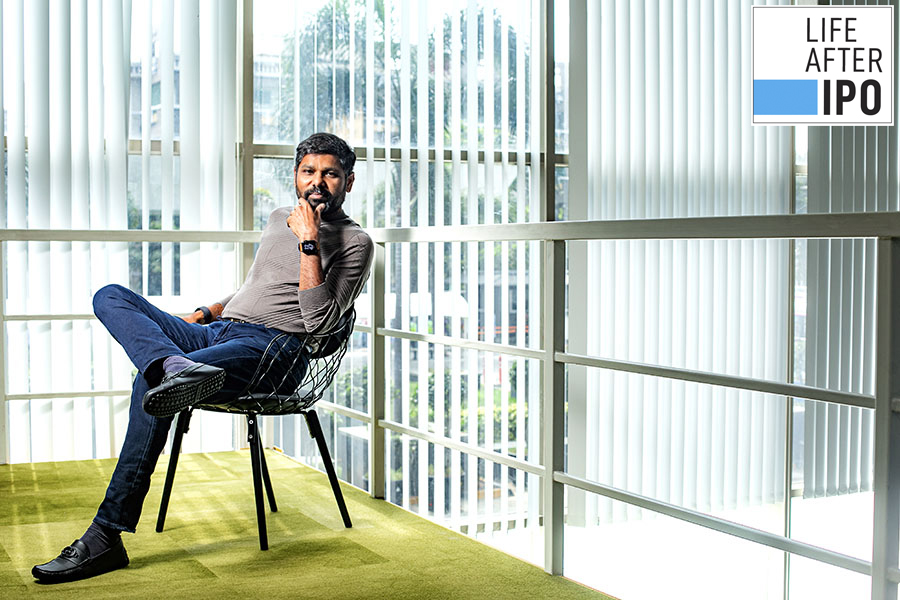 Bengaluru, December 21, 2022. The meeting starts at noon. It has been three days since the thrilling clash between Argentina and France. Though billed as one of the greatest finals in the history of Fifa, there were strong murmurs—and debate—around the role played by luck in deciding the winner of the most coveted sporting title in the world. Did Argentina get lucky in the penalty shootout, and did France run out of luck after a brilliant late surge were the two questions with which the interview started. The context, I made it clear to the interviewee, was luck, skill and fair game.

Girish Mathrubootham quickly dribbles into the debate. “If you are playing a game,” underscored the man who rolled out FC Madras in 2019 to promote grassroots football in the city, “then you must understand the rules of the game.” Whether penalty shootout is luck or skill is immaterial. What’s crucial to understand, stresses the founder and chief executive officer of Freshworks, is that the shootout is very much part of the rule, and the game was played fairly. “Somebody celebrated and somebody cried. But that’s part of the game,” reckons the founder. “Everybody followed the rules.”

So, as a founder of a company, which got a blockbuster listing on Nasdaq on September 23, 2021, have the rules changed for Mathrubootham? Or is he still playing the game by sticking to the old rules? The entrepreneur, who started Freshdesk in a 700-sq-ft warehouse in Chennai in 2010, and seven years later, rebranded the software-as-a-service (SaaS) company Freshworks, underlines there has been a twin change as a founder of a listed company.

Both the context and the rules have changed. “IPO is not the end game. It’s the beginning of a new journey,” he says. While the IPO definitely marks an exit for a lot of VCs (venture capitalist), it also heralds a whole new bunch of investors. They are buying the stock and have a belief in the potential of the company to keep going for next 20 to 30 years. That is the belief with which they’re buying the stock. “And if that has to happen, one needs to learn the new rules of the game,” he says. 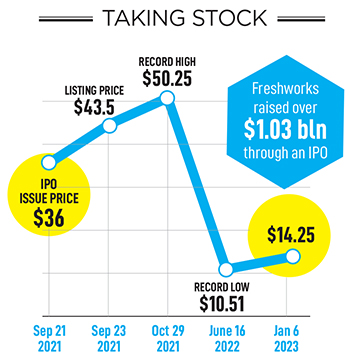 Agreed. So when Freshworks laid off 90 employees globally in December 2021, including 60 in India, was Mathrubootham playing by the new rules? Did the context of a global tech meltdown and how most of the stocks have got battered on the back of a cocktail of unavoidable reasons factors behind the first layoff by Freshworks in its history? Mathrubootham exposes the sensitive side of his personality. “I always operate from the heart. I was not happy with the move,” he confesses. “But I still believe that it was the right thing to do,” he underlines, adding that his life has changed as a founder of a public company.

One of the biggest changes is undertaking a transition from the life of a VC-backed startup to a publicly-listed company. “Public world is a new world. Operating a VC-funded startup was much easier,” he says. As a privately-held firm, most of the times, the founder is focussed on growth, topline and valuation. Profitability usually takes a back seat. As a public company, in contrast, one has to start moving the business towards profitability. Even though public investors value growth, they also want to see that directional improvement, even if it’s one or two percentage points every year, in profitability metrics in the journey. “At the end of the day, you have to understand that you have to do what is right for the business,” he says.

Another change for the founder is making people and stakeholders understand the context of any move. He dishes out the example of the recent layoff. “Do you think that 90 or 60 people’s cost is going to move the needle for the company?” asks Mathrubootham. Had it been a cost-cutting exercise, the company would have cut jobs in hundreds and thousands. “We went public, raised a billion dollars, and have that money in the bank,” he says, alluding to the IPO in 2021.

Freshworks did have a stellar opening. The IPO price was $36, listing happened at $43.5, and the stock reached a record high of $50.25 on October 29, 2021. “Everything was great, the stock prices went up, and then the markets crashed,” he says. The company hit a record low of $10.51, and on January 6, 2023, it was trading at $14.25. “But the fall has nothing to do with Freshworks per se. Everybody is down,” he underlines. Though one can have a little role in the plunging or soaring stock price, the founder is perturbed with another aspect. “Imagine those who bought the share at the peak or listing price and now are under water,” he says. “I can empathise with them. It’s not a happy place to be in, and it’s not Freshworks’ fault,” he underlines. 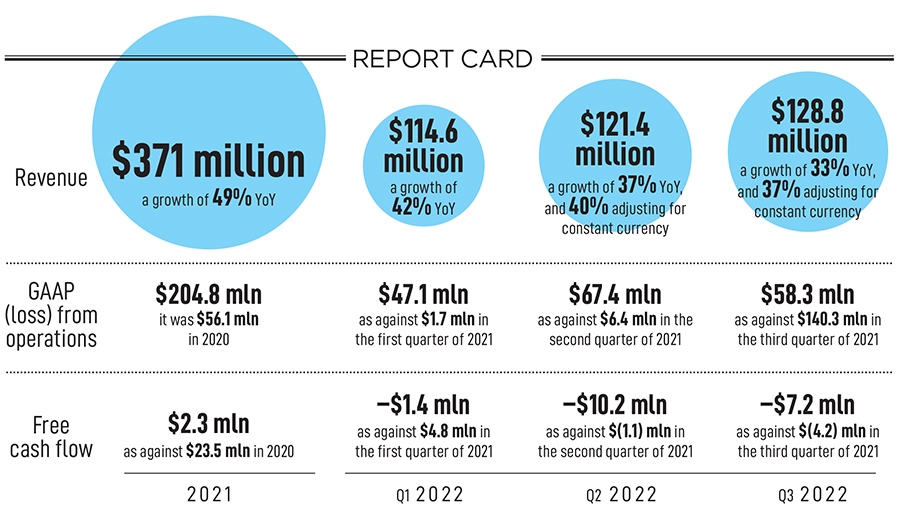 What, though, has not changed for the entrepreneur is one thing which he has always followed to the tee: Staying transparent.

So, this is a game that will continue to go on. So that empathy for the public investors, once you have it, you understand, be transparent. “One must always give a clear guidance,” he reckons. It’s no longer a VC game where one can aspire for ambitious and audacious targets and shell out lofty numbers. “The new game is about credibility,” he underlines. If one knows that only 25 percent growth is possible, one must be honest in sharing the exact number, and not a different one. Public investors, he maintains, don’t want surprises. They want credibility, and it takes time to build trust.

One more aspect which a founder of a listed entity has to live with is more scrutiny and more questions. Take, for instance, the recent class action lawsuit filed by two US-based law firms: Scott+Scott and The Schall Law Firm. Mathrubootham is quick to point out the new rules. “It’s a legal subject and I can’t comment,” he says, taking the topic of discussion back to stock performance. “All I can do is to continue to work and hope that the markets will recover and our share price will again be back where it was,” he says. 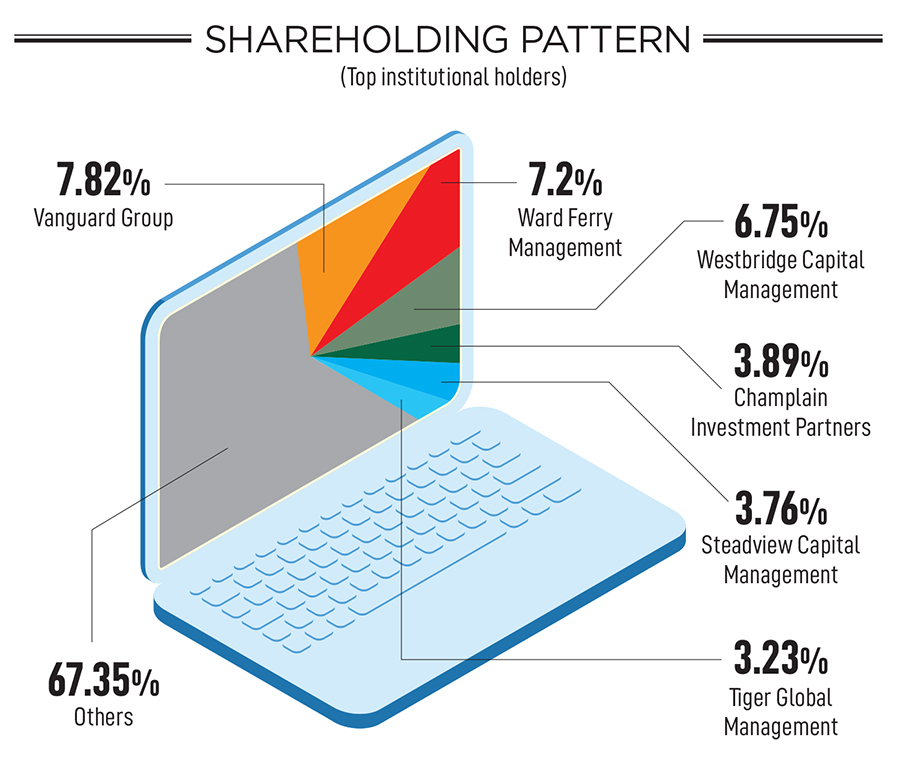 But has the quantum of pressure increased as a public company? Mathrubootham prefers to quote a story shared by his favourite superstar Rajinikanth. “It’s a story of three frogs,” he says. All of them were attempting to climb a steep hill, but it was not easy. Observers cautioned them about the potential risk and pointed out the frogs will find ample eagles and snakes on the way. “You won’t be able to make it,” was the message. The frogs, though, decided to go ahead. The first one was eaten after 100 metres of climbing, the second one too got killed after 300 metres, but the last one managed to reach the top. What worked for the last frog, Mathrubootham reckons, was its deafness. “It didn’t listen to the others,” he says, adding that at times one needs to be a deaf frog to move ahead.

Is this the biggest learning? Mathrubootham nods. “I think I need to develop a thick skin,” he says, quickly adding that it’s not a natural thing for the founder to learn though. “I cannot be reacting to everything that everybody says,” he says. One just needs to do what is best for the company. “Stay hungry, stay foolish and stay partially deaf,” he says.

Tweets by @forbesindia
Cryptocurrency: What to expect for the digital currency from Budget 2023
China greets the Year of the Rabbit with pro-growth policies