China greets the Year of the Rabbit with pro-growth policies

China's reopening is one of the most watched global economic events of 2023, as it will set the tone for global recovery in the coming months 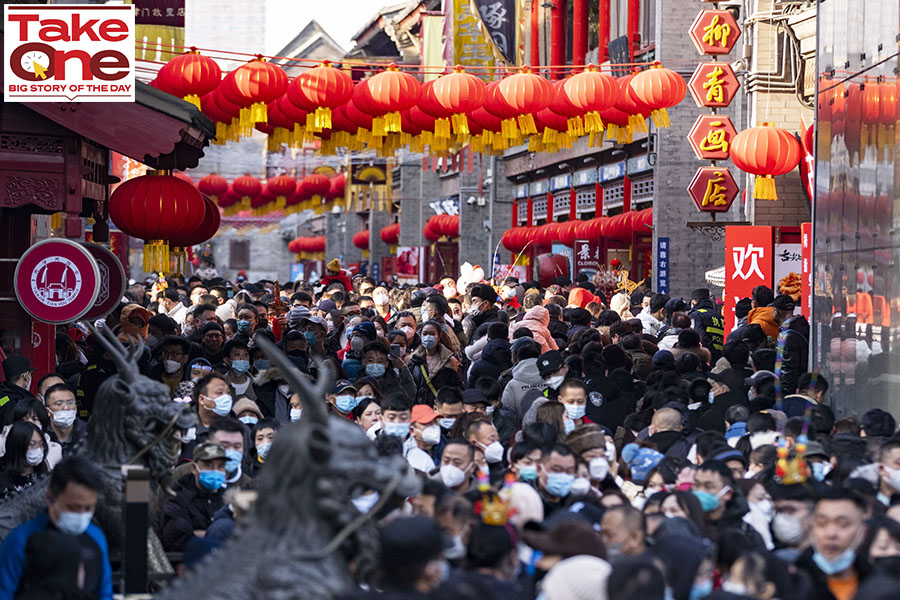 After three years, the 15-day spring festival—which started with Lunar New Year celebrations on January 22—is being celebrated without draconian Covid-19 restrictions in China, as the government ‘reopened’ the economy Image: VCG via Getty Images

China hopes to take a great leap forward in the Year of the Rabbit. After three years, the 15-day spring festival—which started with Lunar New Year celebrations on January 22—is being celebrated without draconian Covid-19  restrictions in China, as the government ‘reopened’ the economy with pro-growth policies for rapid growth.

Mark Matthews, head of research for Asia at Julius Baer, a private banking corporation, says one of the most unexpected aspects of China’s reopening is the removal of harsh border controls. Over 2 billion people are expected to travel during the festive season.

“We can already see Chinese tourists here in Singapore, for the first time in three years. Around a million Chinese citizens have applied for permits to travel to Hong Kong, Macau and Taiwan during the Lunar New Year. It will be interesting to see how they and their hosts interact with each other,” Matthews adds.

Sunil Tirumalai, executive director and equity strategist at UBS India, points out the dichotomy of China’s reopening for its domestic economy as many companies are still seeing operations disrupted by Covid. “The upcoming spring festival means different things to different businesses, often in unexpected ways. For instance, logistics companies could be rejecting delivery orders due to a surge in wages of delivery personnel, while some manufacturing firms are likely to work overtime to fulfil order backlogs,” he says.

While the government is lifting Covid curbs, the reported death toll has been disturbing, and the World Health Organization (WHO) has been urging China to share more details of the recent wave of Covid infections in the country. The Chinese government claims that 80 percent of its population has, at some point, been infected by coronavirus.

Also read: Snapshots of the global economy going into 2023

“China’s National Health Commission says peak severity of the epidemic has already passed, with emergency ward visits and hospitalised patients down 40 percent since the beginning of the year. In the countryside, the situation is less clear, and with the Lunar New Year holiday there will be much movement there,” notes Matthews. 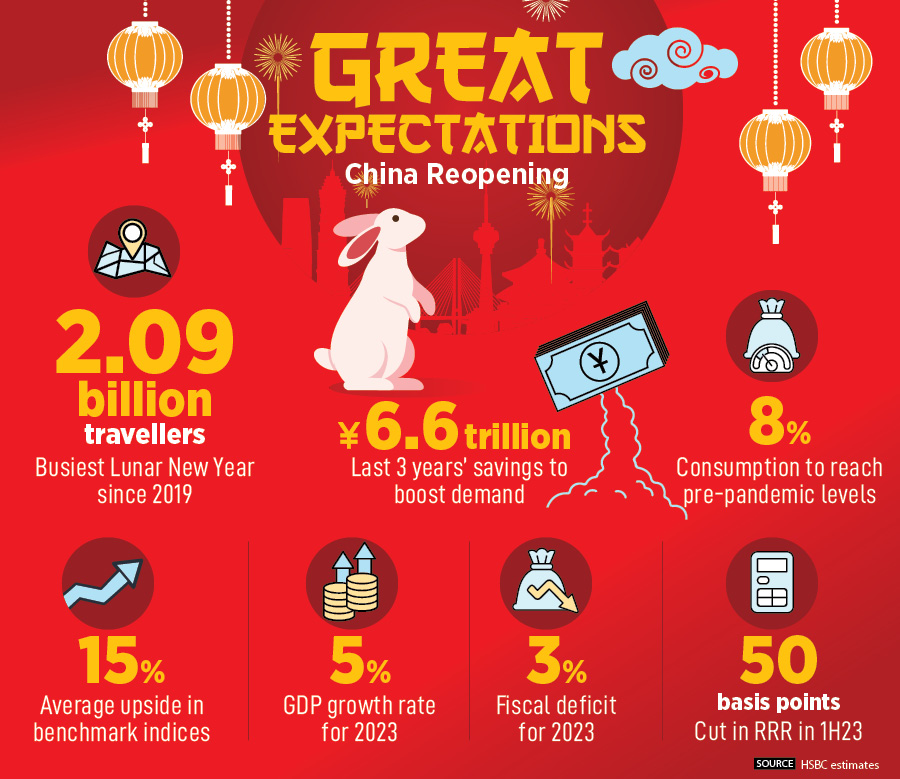 Against this backdrop of risk and uncertainty, the world’s economic juggernaut is reopening. Markets widely expect excess savings—accrued over the past three years—to the tune of RMB 7 trillion to boost consumption to the pre-pandemic level of 8 percent and push a GDP growth of 5 percent in the current calendar year (see table).

However, some economists are sceptical about how the spurt in pent-up demand from the reopening of China’s economy will playout for China and the global economy.

Rob Subbaraman, Nomura’s chief economist and head of global markets research for Asia ex-Japan, is cautious: “Too much pent-up demand being unleashed during the reopening, when the supply-side of the economy is struggling to return to full capacity, may not be a good thing, as it contributes to inflation and tighter monetary policy. Those calling for a mega-surge of Chinese pent-up demand should be careful what they wish for.”

Also read: How China has dragged down investor returns over the past decade

At the World Economic Forum in Davos, many global leaders were particularly concerned about the impact this would have on global price levels as central banks worldwide battle record-high rates of inflation with financial tightening.

“Chinese demand for other goods starts picking up and creates a bigger pressure on commodity prices. China’s reopening is good news overall, but potentially, there could be some inflationary impact,” said Raghuram Rajan, former governor of Reserve Bank of India, at Davos.

Matthews doesn’t expect China to significantly increase its relatively high level of infrastructure or property-related spending to spike the cost of industrial commodities. “It is also noteworthy that oil prices have not really reacted to China’s reopening. So, it does not look very inflationary,” he says. 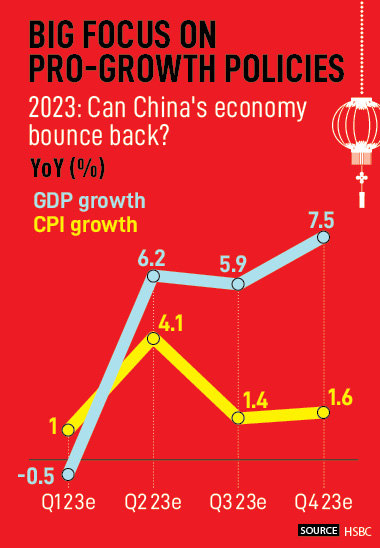 China’s economic reopening is one of the most important events this year. By reopening its borders after more than 1,000 days, the Chinese government has signalled its return to normalcy. Economists expect the economy to gain momentum over the coming months (see table).

“How ‘bad’ China’s experience has been in living with Covid will determine how ‘good’ the recovery is. For now, there is still a sense that households and businesses might be too shocked to do a lot of spending very soon. Still, as a result of the reopening, we have adjusted our 2023 GDP growth forecast for China from 4.7 percent to 5.2 percent,” Matthews says.

After a weak start this year, China is expected to grow by over 6 percent in the April-June quarter, before slowing down in the third quarter, and then leaping ahead by 7.5 percent in the last quarter of 2023. At one level, this holds the potential to be a lifeline for the world economy, which is projected to grow by a tepid 0.5 to 1 percent, as it wrestles an economic downturn.

HSBC’s economists expect Beijing to unveil a series of policies to support growth, while at the same time ensuring that inflation remains under control. “We could see a reconvergence in the macro profiles of China and the US over the course of 2023 as China experiences higher growth and inflation, while the US slows under the pressure of restrictive monetary conditions.”

But much of the expectations are tied with hope. There are multiple challenges that can distort the recovery thesis (see table). 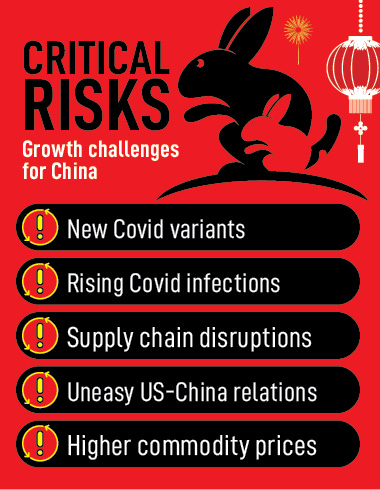 Foremost, is the possibility that the health care infrastructure is unable to absorb the rise in fresh infections, leading to labour concerns and supply chain blockages. Also, China’s uneasy economic relations with the US and its rising military aggression, and hostilities with neighbouring countries over encroachments on geographical borders, are big worries for the world. It is hard to pinpoint how these factors will pan out in the coming months, but investors are cautious.

“Around five years ago, the deterioration in relations between the West and China was viewed as something that was purely political and not economic. Now we see it has economic implications. As a result, foreign direct investment into China has been drastically curtailed. Portfolio investment tends to follow direct investment over time,” Matthews says.

The Chinese government is on the front foot with accommodative policies to support durable recovery in the economy. Given the downward risks to growth, the People’s Bank of China is expected to go ahead with a 50 basis points cut in its Required Reserve Ratio (RRR). On the fiscal front, the expansion in stimulus packages and government spending is likely to push the fiscal deficit to 3 percent from 2.8 percent in the current calendar year.

Xi Jinping’s government announced a series of measures to rescue the dwindling property market. The housing sector is expected to recover sharply in the course of the year as sales stabilise. The pro-growth policies will stoke price pressures but inflation is unlikely to cross 4 percent this year (see table).

The Year of the Rabbit also marks a big change: For the first time in decades, China’s birth rate is falling, and has hit a record low. The National Statistics Bureau states that there are seven babies per 100 people in China. At 1.3, the country’s fertility rate is lower than that of Japan. It is faced with an ageing population and wages are on the rise. This can affect China’s competitive advantage in manufacturing over the years.

But for now, experts believe the reopening theme will propel China’s manufacturing sector. “China is a big consumer market and we will see pent up demand further adding excitement to the business. Also, we will see new investments in China. However, this time the investments will be more China-centric than for serving the world. Manufacturing will rebound like never before in 2023,” asserts Puneet Gupta, director, Automotive Sales Forecast India & Asean, S&P Global Mobility.

Last year China witnessed below-average growth for the first time in four decades. Speaking at the closing session of the World Economic Forum in Davos, International Monetary Fund’s managing director, Kristalina Georgieva said China’s growth rates are not going to return to the days when China delivered about 40 percent of global growth. “That is not going to happen. Not 7 percent, not 6 percent, but in a better place of above-average growth,” she said. The caveat, of course, is that China fully implements its reopening plans.

Tweets by @forbesindia
Girish Mathrubootham on how to stay hungry amid a carnage
Photo of the day: A new approach