How China has dragged down investor returns over the past decade

With a cynical view of India, global investors had bet big on Chinese equities. Now, decades later, the MSCI China Index has delivered no returns, but the MSCI India Index has gained a whopping 2,000 percent 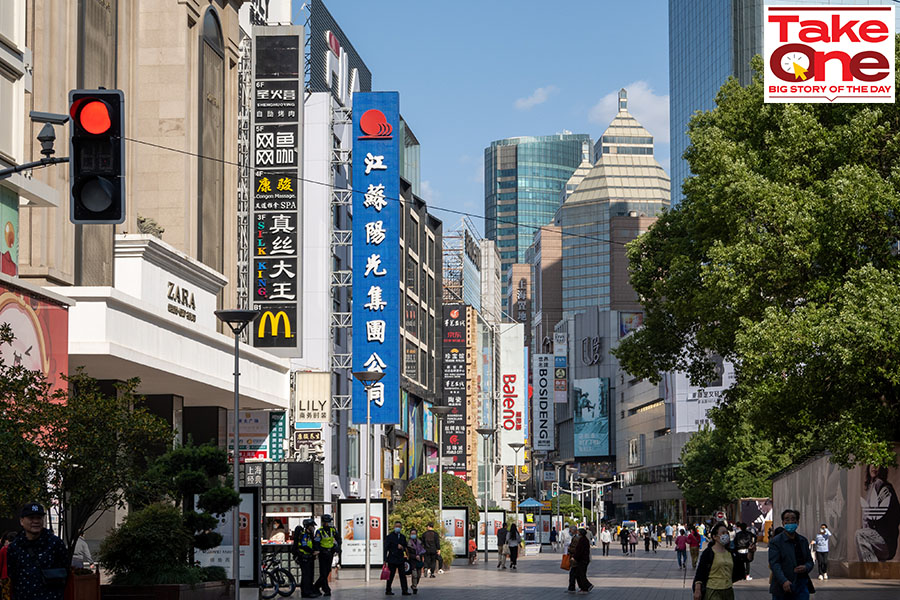 The mainland’s Zero Covid policy has led to frequent lockdowns and supply chain disruptions. Its impact on social life is significant, and consumer sentiment is bleak. Image: Getty Image

No candid investor will flinch while confessing the hype around China at most fundraising roadshows. For decades, global investors have fancied China over India for big-ticket investments and the lure of higher returns. That notion may bite the dust given the stark underperformance of China stocks.

Saurabh Mukherjea, founder and CIO, Marcellus Investment Managers, says the portfolio allocation of most global family houses and endowment funds towards Chinese stock markets is four-five times that of India, although returns from China have been dismal over the past decade in relation to India.

“In New York or London, you will not hear a word about the Indian stock market. Most investors, for decades, have had a cynical view of India. They had this wildly bizarrely positive notion about China, which is neither founded on fact, nor on investment returns. I think that anomaly has begun to correct,” Mukherjea adds. 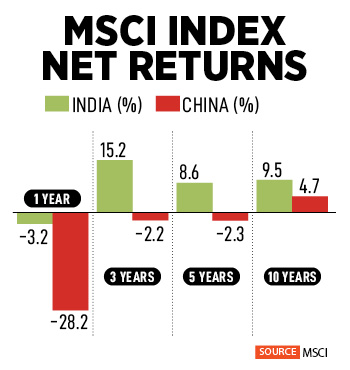 China vs India: Eye on Returns

Interestingly, since its inception nearly thirty years ago, the MSCI China Index has delivered no returns to investors. In contrast, the MSCI India Index returned a whopping 2000 percent and the MSCI Emerging Market Index rose over 160 percent.

“Earnings growth in China has been meagre over the past 10 years compared to the high-growth seen in the 2000s. MSCI China EPS has hardly grown in the past 30 years, and the returns since 1993 is negative in USD terms. Low profit growth coupled with loss of domestic and international investor confidence has led to a de-rating of Chinese equities,” says Mihir Vora, senior director and CIO, Max Life Insurance.

Despite its relative outperformance over most time periods, global investors have generally been lukewarm towards Indian equities and fund allocations, by and large, have been tilted in favour of China.

However, since February last year, China stocks have seen a massive sell-off. The market cap of companies listed on the MSCI China Index plummeted by $5 trillion dollars—the steepest decline in six years. The MSCI India Index, meanwhile, has gained around $300 billion. Reportedly, foreign investors exited equity holdings to the tune of $8.5 billion last month and $734 million in the first ten days of November, indicates data from Refinitiv.

In times of global macroeconomic upheaval, coupled with aggressive rate hikes by the US Federal Reserve, foreign investors tend to shun emerging markets to mitigate risks arising from currency depreciation, for example.

The Chinese Yuan has declined by 12 percent against the US dollar, while the Indian rupee weakened around 10 percent against the greenback. Moreover, India has also witnessed relentless selling by foreign institutional investors (FIIs) since October last year. But, the resilience of domestic investors helped its benchmark indices strike record highs despite market volatility.

The Roar of the Tiger

Increasingly, as China grapples with multiple growth challenges, India’s popularity among foreign investors is fast catching up. In a recent report, Morgan Stanley claimed India will drive a fifth of global growth through the end of this decade, projecting the equity market cap will swell to $10,000 billion from $3,500 billion. The report estimates India to account for 4.5 percent of world exports, up from 2.2 percent currently. 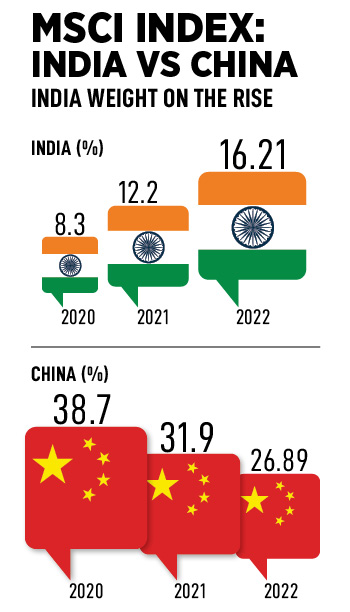 Vora explains, multinational companies and global investors are actively looking to diversify away from China, and India has become an attractive alternative due to its openness, democratic institutions, and its huge domestic market.

“Serendipitously, the world is allowing us to address the traditional bugbears which have held our economy back. This is the beginning of the story. We haven’t even touched the tip of the iceberg properly yet,” Mukherjea says.

The narrative around China has dramatically altered. Its heft and influence upon the global economy is hard to ignore, but the winds are changing. Beijing’s decision to restore its Mao-era policies of the 1950s by way of a controlled economic system has rattled the outside world.

“China has increasingly started focusing on reducing inequalities—large companies and big tech companies are being systematically cut down to size to reduce their economic power. This, coupled with an over-leveraged financial system, has led to corporate profits being under pressure,” says Vora.

China’s regulatory crackdowns on technology companies, its bitter relations with the US, and rising geopolitical tensions have unsettled foreign investors.

Vora says the last two years have shown the Chinese regime turning aggressive and desirous of expanding its geographical borders putting Hong Kong and Taiwan under threat. “China is increasingly seen as hostile, and is perceived to have no respect for intellectual property. As China’s gap in high-tech versus the US and Europe reduces, the developed world is becoming extremely worried,” he adds. 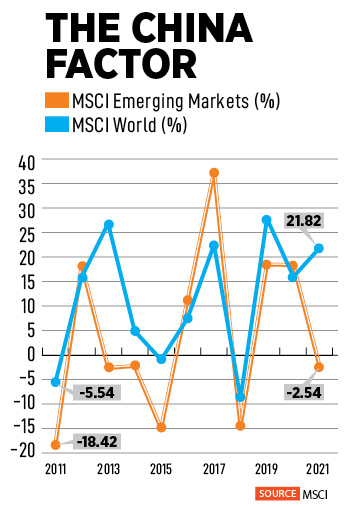 In this backdrop, China’s economic pain is deepening. “It looks like a comprehensive economic blow-up in China of not just the housing market but also its financial system,” says Mukherjea.

The mainland’s Zero Covid policy has led to frequent lockdowns and supply chain disruptions. Its impact on social life is significant, and consumer sentiment is bleak. The collapse of the property market has further led to a downward spiral in economic activity.

“There is a negative vicious cycle going on in the property sector amidst the Zero Covid strategy. As a growth engine, China is clearly weakening and I think that will have an impact on the rest of the world,” says Sonal Varma, MD and chief economist, India and Asia ex-Japan at Nomura. China reported a contraction in exports and imports in October.

Over time, foreigners investing in emerging markets via exchange-traded funds (ETFs) have finally realised that their portfolio return is being crushed largely due to the poor performance of China—given its dominant weight in most emerging market indices and funds.

For instance, China comprises 26.89 percent—the largest country weight—in the MSCI Emerging Market Index. India accounts for 16.21 percent, and Taiwan 13.52 percent among other countries. This explains the high degree of dependence of the index on the performance of China stocks. Last year, the MSCI Emerging Market Index was down by 2.54 percent, whereas the MSCI World Index was up by 21.82 percent. 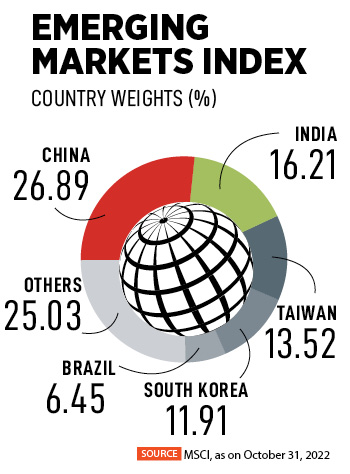 As investors turn cautious of the risk associated with Chinese equities, many investors are looking to avoid emerging market ETFs and opting to increase investments in US markets. However, there is also a demand to exclude or lower the weight of China in emerging market funds.

Vora believes India is now getting its rightful share of attention in the global economy. “Some global asset management companies have launched funds based on indices, which specifically exclude China. Reduced weight for China automatically means much higher weight for India,” he adds.

The ‘returns’ track record notwithstanding, the valuation of Chinese stocks is at a seven-year low currently. Enticing for many investors, but a trap for others. On the other hand, Indian stocks—riding the wave of high DII flows—are trading at relatively high PE multiples and are seen as most expensively valued among emerging market peers currently. Will the tiger beat the dragon in the coming decade? Time will tell.

Tweets by @forbesindia
Nuts and Bolts: When will the falling Indian rupee recoup against the US dollar?
Curve and Binance fight to take over 87,000 BlockFi credit card accounts