By suggesting cheaper alternatives to prescribed drugs, the pharmacy chain aims to provide consumers with more affordable medicines in India 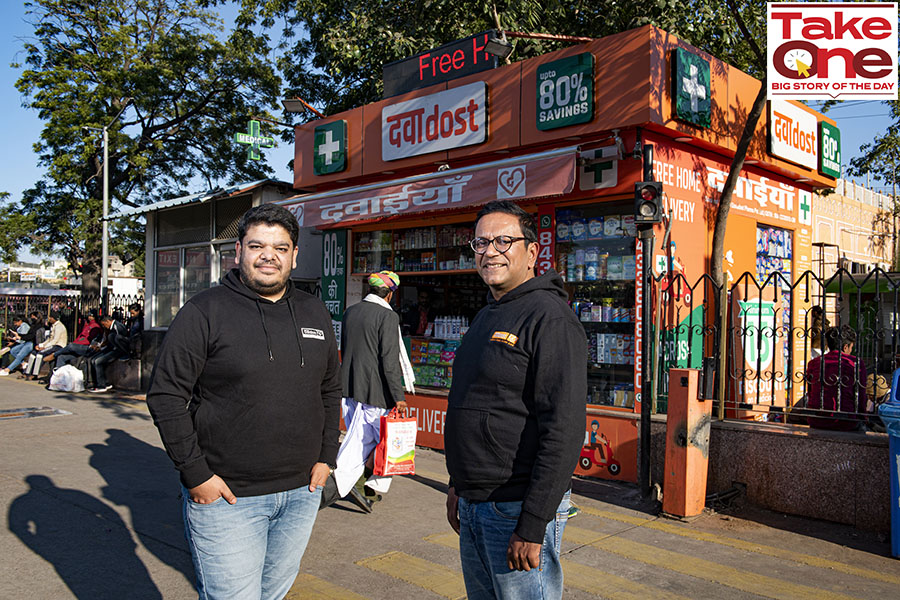 For Raman Diwakar, the monthly medical bills for his old and ailing mother were proving to be a challenge. Through a colleague’s recommendation, he came across the Dawaa Dost website, and found a ‘friend’ in it to ease his medical expenses. “On Dawaa Dost, I found alternatives to the prescribed expensive medicines, and the difference in prices was shocking.”

Dawaa Dost, an omnichannel pharmacy chain, began operations in 2018 with a mission to make medicines affordable for Indians. Co-founded by Amit Choudhary (CEO), Yash Harlalka (COO) and Anirudh Batwara (CTO), Dawaa Dost aims to provide a minimum of 50 percent savings on all prescriptions, ensure that people have an equitable access to medicines, while making consumers aware of the medicines they are taking by answering questions around them.

“I come from a small village in Jharkhand and was raised in Calcutta, where I have seen the medicine accessibility and affordability challenge, first-hand,” recalls Choudhary. He and his team thought of starting Dawaa Dost when they realised that India struggles with four problems with regards to medications: Affordability, accessibility, awareness and adherence. Choudhary, 44, took forward the idea from his cousins who had started an initiative called Dawai Dost in 2015 in Ranchi.

Headquartered in Jaipur, Dawaa Dost has corporate offices in Hyderabad, Bengaluru, and Mumbai, with more than 250 employees. The chain has 70 stores in nine cities in Rajasthan, Karnataka, Telangana, Maharashtra and Delhi. “Our stores are designed as ‘omni-channel units’; they are physical stores as well as fulfilment centres for digital orders, and are located in high footfall areas such as near bus stands, railway and metro stations,” says Choudhary, who has previously worked with companies like P&G, JP Morgan, and Motilal Oswal Private Equity.

Choudhary says pharma companies typically have an army of sales representatives to ensure their brands of medicines are prescribed by doctors. Since the companies themselves create the demand for their medicines, they take most of the profits and share a limited percentage with retailers, wholesalers and distributors. What isn’t common knowledge, Choudhary explains, is that the same pharma companies have a different business division that produces ‘trade generic’ medicines, which are under the same parent brand, often have similar packaging and are not pushed by sales representatives. Trade generic drugs are usually cheaper than those pushed by sales representatives, and since retailers and distributors are expected to create demand for these medicines, they keep the bulk of the profits.

It is not unusual for pharmacies to suggest alternatives to prescribed medicines. This is how Dawaa Dost recommends medicines as well, while providing consumers with details of the alternatives. “We’re not doing something dramatically unique; it is happening at your go-to medicine stores too, but no one is passing on the savings to consumers because the pharmacy is keeping the extra margin.”

When consumers enquire about a medicine on Dawaa Dost’s website or at a store, they are presented with an alternative that is vetted and recommended by a team of doctors and qualified pharmacists.

The prescribed medicine and its alternative are matched along four parameters: Active pharmaceutical ingredient (API), strength (number of milligrams), form (capsule, tablet, etc) and release pattern. “What we define as medicine is the API and not the brand. When you search for a medicine on Dawaa Dost, you will always get an exact match, considering these four elements to it; there is no fifth element in the medicine,” says Choudhary, who got this process validated by late Dr KK Agarwal, former president of the Indian Medical Association. 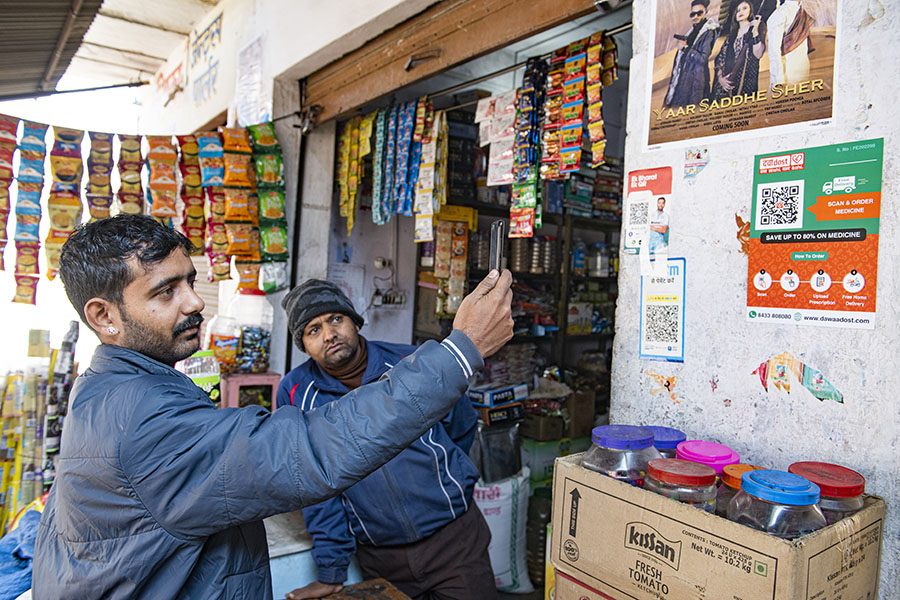 Like at physical stores, customers need to upload a prescription on Dawaa Dost’s website for an order to be fulfilled, and can opt for the prescribed drugs or Dawaa Dost’s recommendation. Like with regular pharmacies, Dawaa Dost earns its revenues from product margins. For online purchases, the order fulfilment takes place from a Dawaa Dost store and the same process of revenue generation follows.

Although trade generic drugs may be cheaper, consumers might still prefer a trusted doctor’s prescribed medicines. Tushar Manudhane, research analyst at Motilal Oswal Financial Services, says, “Doctors continue to play an important role in the prescription of medicines. While patients are also getting educated about generic names of drugs, a lot of effort is required to build confidence among consumers to use generic medicines, although they are cheaper. I see both branded and trade generics to be present in India over the next three to five years.” 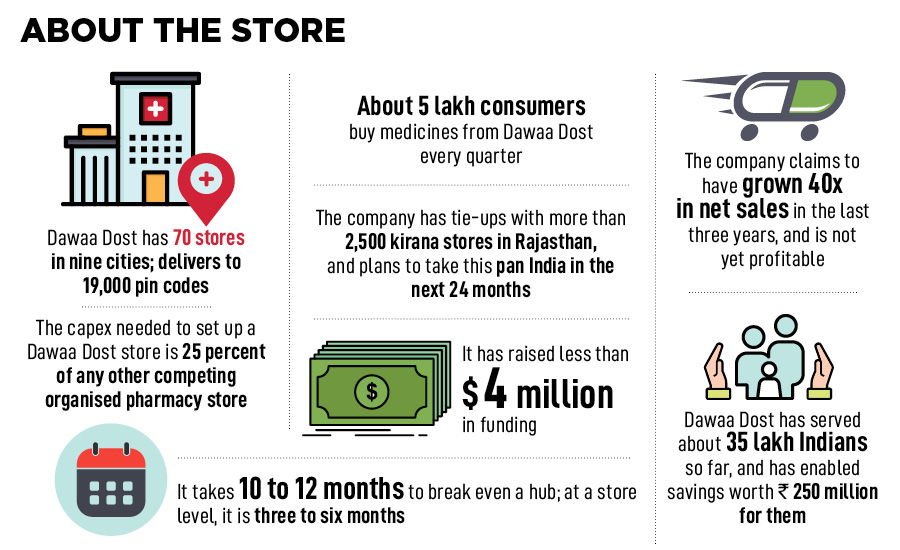 “There are lots of people who do not have access to medicine. Dawaa Dost not only provides that access but also aims to change customer experience by making the process consumer-centric. The way they deploy themselves in the city is very interesting, and if they stay committed to what they started off with, which is changing the experience for the consumer and thereby improving the ecosystem, then the rest will follow,” says Abhay Havaldar, partner at Avatar Growth Capital Partners, and angel investor in Dawaa Dost.

In April 2022, Grameen Impact India Investments, a Reserve Bank of India-registered, non-banking finance company, provided a debt facility to Dawaa Dost, making it the first private Indian company to raise debt funding from Grameen Impact. This was for its focus on the sustainable development (SDG) goals of good health and well-being. “Dawaa Dost has strong commercial potential while also demonstrating social impact. They have built a proprietary search engine that helps people find the right medicine at the right price. This interesting model is their unique selling proposition,” says Royston Braganza, CEO, Grameen Capital.

Braganza adds that since the funding, Dawaa Dost has doubled its month-on-month revenue and has achieved Rs 19 crore top line in the first six months of FY23, as against Rs 13 crore in FY22; cumulative savings has grown by over 300 percent. “We expect Dawaa Dost to continue to focus on the rural market and positively impact the rural population with respect to affordable medicines. Their efforts also have the potential of job creation across internal and external verticals,” he says.  Choudhary says Dawaa Dost is expected to turn profitable in FY23.

In order to stay ahead of competition and providing access to medicines across rural India, the Dawaa Dost team doesn’t want to stop with online and offline stores, and has tied up with over 2,500 kirana stores in Rajasthan to sell medicines through them. “From an accessibility standpoint, no one is catering to small towns and villages. If we look at large e-pharmacies, they are focussed on the top 4 to 5 percent of the population. Keeping this in mind, we launched an assisted selling platform by partnering with kirana stores,” explains Choudhary.

Consumers can scan a QR code at Dawaa Dost’s partner kirana stores, go to the Dawaa Dost website, register themselves, and receive a call from Dawaa Dost’s command centre to understand what medicine is required. Consumers can either upload the prescription on the website, order medicines and get them delivered to their doorstep, or get help from the command centre if they don’t have a prescription or even a photograph of the medicine. If consumers don’t have a smartphone, the kirana store owner can help place the order on a B2B app. The kirana stores get a commission for origination of orders, while their fulfilment takes place from a Dawaa Dost store.

In rural areas, the company has launched an initiative called Dawaa Ki Potli, which includes a pouch of over-the-counter (OTC) medicines for fever, common cold, diarrhoea, fungal infections in menstruating women, etc for Rs 99; it comes with a booklet, with pictorial descriptions for those who cannot read.

In 2021, the company launched Mediwiki, a search engine-based video library, curated by a team of pharmacists, which aims to help users understand their medicines better. The platform has over a million videos in six Indian languages, explaining the medication for different requirements, how they work, their side effects and other frequently asked questions. Its online application called Karma Dost, reminds users when to take their medicines.

“Our goal by 2025 is to save $1 billion for Indians. This means we will continue to build more ‘hubs’ of operations in different parts of India,” says Choudhary who claims that Dawaa Dost is currently the fastest growing health care company in India.

Tweets by @forbesindia
Digital Marketing Mavericks: How Kinnect is connecting the dots for brands in the VUCA world
5 Questions for Kinner Sacchdev, co-founder and CEO of Knorish