From IPL to lifestyle, how RCB is planning its next big bet 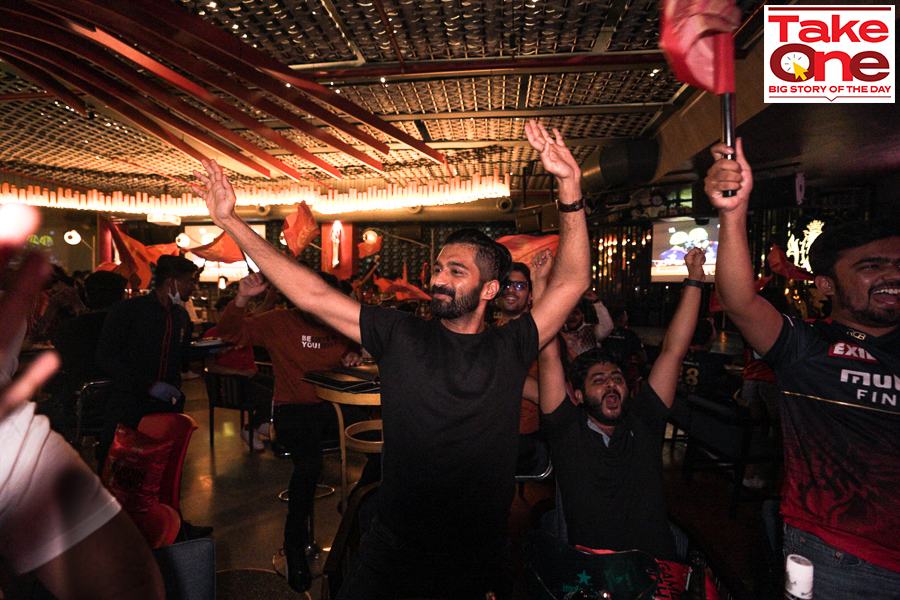 RCB fans cheer for the team at the RCB Bar & Cafe in Bengaluru. The sports cafe, launched in December 2020, was the IPL franchise's first foray into lifestyle

On an otherwise leisurely Saturday afternoon in mid-March, Bengaluru’s Church Street, a 500-odd metre stretch that houses some of the city’s most popular cafes, hangouts and bookstores, was locked in a battle of vocal cords with the neighbouring Chinnaswamy Stadium. While chants of 'Virat, Virat' rented the air at the cricket ground where India was playing against Sri Lanka in a day-night Test match, barely a kilometre away, a chock-full of fans had assembled around the RCB Bar & Cafe and were matching decibels, roaring, "RCB, RCB"."

Traffic at the intersection of Church Street and Museum Road—where the cafe was located—had been blocked to facilitate the day-long ‘RCB Unbox’ event, sidewalks were lined up with banners and festoons, and a makeshift stage to host the likes of singers KK and Akriti Kakar was set up. But that wasn’t all: Word had it that Faf du Plessis, the new captain for Indian Premier League (IPL) franchise Royal Challengers Bangalore (RCB), was in the house, and the gathering was imploring for a dekko.

A little after 5 pm, du Plessis emerged on the cafe’s balcony for a customary wave, triggering thunderous sloganeering that would have given the crowd at Chinnaswamy quite a start. “That’s a lot of people,” exclaimed seamer Harshal Patel. Patel, who won the Purple Cap for the most wickets in IPL 2021, had accompanied the skipper, keeper Dinesh Karthik, and coaching director Mike Hesson to the venue for Unbox, where the new captain was announced and new jersey was to be unveiled.

Inside the cafe, Rajesh Menon, the vice president and head of RCB, sounded a little apologetic for the chaos. “We didn’t expect so many people to turn up despite the Test match going on at Chinnaswamy,” he says. Yet, Menon could take deep satisfaction in the assembly of the jousting fans, for, in them, he has pinned hopes for RCB’s next foray: Of transforming the sports franchise into a lifestyle brand.

RCB had begun the rollout of its lifestyle ambitions with the Bar & Cafe, inaugurated in December 2020, but had a stop-start journey because of the second and third waves of the pandemic. “We went into the F&B vertical to have a round-the-year presence,” says Menon. “The IPL is seasonal, but the fans are following us throughout. The idea was to create a temple for fans.”

But its first pan-India propagation of the lifestyle proposition came through an athleisure range in association with Puma, which had a low-key launch last September. Its success has emboldened Menon and his team at Royal Challengers Sports Pvt Ltd (a subsidiary of Diageo India and the owners of the IPL franchise) to now go full throttle: At the Unbox event, he outlined an ambitious brand-building roadmap with a portfolio that includes apparel (with Puma), metaverse (beginning with an NFT drop by the end of the IPL or just after), F&B (the cafe, cocktail mixes and plant-based meat), and a fitness app (the beta phase will be launched by end April or May).

Menon says the plan to expand into lifestyle was seeded around two years ago, with an eye on the revenue streams the IPL offered: Ticketing, sponsorship and media rights. “Of these, the first two are finite. You can’t expand the stadium, or raise the ticket price beyond a point. For sponsorship, too, we’ve sold inventory on the kit and also monetised players’ time. There’s no going further,” he says. “We had to look at how we can make the brand bigger in line with where the sports ecosystem is going.” 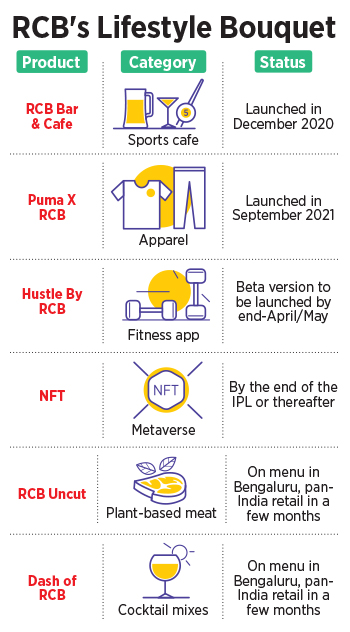 At the core of RCB’s brand-building lies its enormous fan-following and social media engagement that can give many global sports teams a run for their money. In 2021, the Bengaluru-based franchise and Chennai Super Kings (CSK) were the only two non-football teams to feature in the global top 10 rankings of the highest social media engagement. While the list was topped by Manchester United, FC Barcelona and Real Madrid, with 2.6 billion, 2.3 billion, and 1.3 billion engagements on social media, respectively, RCB was 8th with 820 million, a place ahead of CSK at 752 million.

“I believe we are truly a digital publishing house,” says Menon, who has earned the bragging rights with 250 million views recorded by 225 videos that the franchise released last year. In a universe where performance typically precedes following, RCB has managed to buck the trend by building a legion of fans—it calls them the 12th Man Army—despite never winning the IPL.

“RCB has heroes like Virat Kohli. People love the players who represent the brand, irrespective of whether they win the IPL,” says Rajesh Srivastava, ex-CEO of JK Helene Curtis and the author of the bestseller The New Rules of Business. “Winning adds an extra sheen, but it is not the reason why people support a particular team. If you have celebrities in the team, people will follow the team.” For perspective, Kohli has topped the Celebrity Brand Valuation Report 2021, recently released by consulting firm Kroll, for the fifth year running, with a brand value of $185.7 million.

If you are a sports brand, what kind of a lifestyle identity should you own? “The one that has a sportsperson at the centre. A sportsperson believes in a certain kind of fitness routine, diet, is seen in a particular type of apparel,” adds Srivastava. “Once RCB owns this identity, people who wish to lead this lifestyle will embrace this brand.”

In choosing its business levers, RCB seems to have ticked most of these boxes—plant-based meat, fitness app Hustle By RCB, for example—as well as displayed business canny by going for categories that are future-ready and are expected to grow—cafes, athleisure, NFTs.

“With Kohli in their setup, RCB has already built a lifestyle aura as opposed to, say, a CSK, which is cast differently in the mould of their central character, MS Dhoni. The transformation of a brand is complete when you convert your equity in one area into another, which is why most categories make sense to me,” says Santosh Desai, veteran marketeer and CEO of Futurebrands. “Sports cafes, for instance, are an established category to allow like-minded fans to come together, and hang out, and NFTs lend themselves well to sports properties like memorabilia, tickets etc.”

Desai isn’t entirely convinced about the retail of alternative meat, since it’s a fairly unexplored territory in India, but the category is generating market buzz and, according to consulting firm Technopak, has grown at 30 percent CAGR last year, although on a small base. Its flagship RCB Bar & Cafe also affords the franchise the opportunity of live market research and fine-tuning the F&B products—RCB Uncut (plant-based meat) and Dash of RCB (cocktail mixes) are available for customers at the Bengaluru restaurant before setting off on a pan-India launch in a few months.

Will RCB’s lifestyle plan take off is a question that has been partly answered in its fledgling innings with Puma. Despite the launch being outside the season in the first year, Puma sold over 100,000 units of PUMA X RCB collaboration in the Autumn-Winter 2021 season. The company expects to double the business this year.“The timing of our partnership was a little counter-intuitive, as we did that during the pandemic. We were witnessing an increase in overall interest around sports. Given RCB’s immense fan-following, we decided to go ahead with the opportunity,” says Abhishek Ganguly, managing director, Puma India and Southeast Asia.

The apparel range has been shaped by Menon’s constant conversations with international sports clubs like Liverpool and Real Madrid, and Puma’s extensive experience with building brands for marquee athletes, both within India and internationally. “Our relationship with Puma itself is born out of our global learnings,” says Menon. “For example, merchandise is big globally, but still nascent in India. Abhishek and I spoke about how this business has a huge opportunity to grow in India. That’s why we began the partnership.”

Ganguly adds that the range takes after their understanding of how global clubs work. “Fans love wearing replicas of the on-pitch kit of the team they follow. However, today, with the advent of social media, they also follow their favourite teams and players beyond the pitch. They track what the players are wearing while travelling, in team meetings, in the hotel, while training and also when they are at the gym. RCB might be playing only during the season, however our offering is 360 degrees: On pitch and beyond, and through the year.”

Athleisure is an industry that has seen high growth before Covid, and benefited from the tailwinds of the pandemic as well. “The industry has grown at 16 percent CAGR over five years,” says Ankur Bisen, senior partner and head, consumer, food and retail at Technopak.

Adds Bisen: “Choosing partners is key to the licencing model, and very few companies, like Disney, have been able to pull this off in India. In each of its businesses, RCB needs solid partners to stay the course, and strong implementation measures. The move to tie up with Puma, which is India’s largest player in the athleisure category, is absolutely on point here.”

Menon isn’t willing to share RCB’s revenues, nor will he quantify the target he has set for the revenue share for its lifestyle foray. Even as a percentage of its overall revenue, he says, the value will vary from this year to next, since the share of media rights will increase with the five-year cycle beginning 2023 (each franchise is entitled to a part of BCCI’s media and title rights). “All I can say is,” he adds, “it will be substantial in future.”

Even in its off-field aspirations, RCB seems to be adopting its on-field philosophy of #PlayBold.