Nuts and bolts of GoMechanic's 'why' and 'why not' 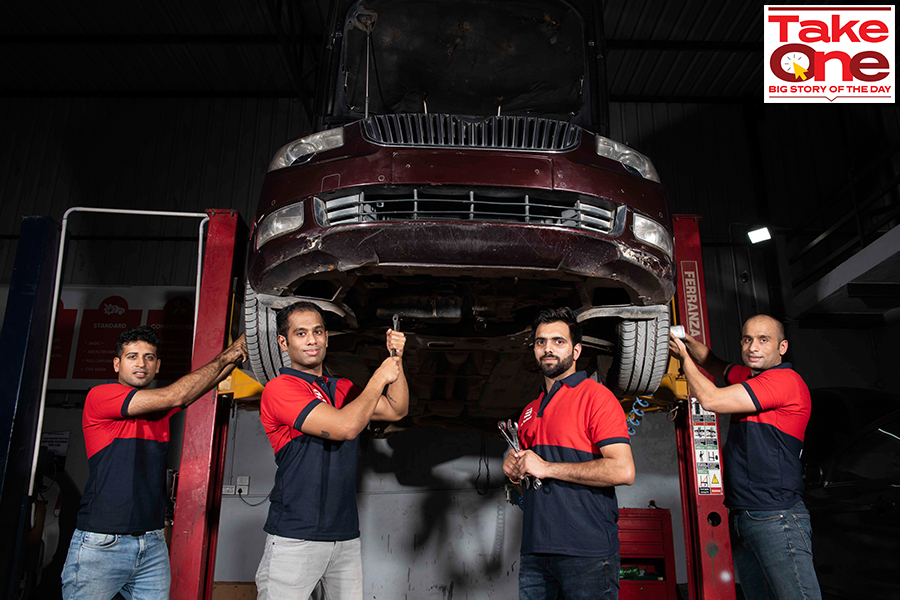 (L to R) Amit Bhasin, Rishabh Karwa, Nitin Rana, and Kushal Karwa. Co-Founders of GoMechanic at one of their workshops in Gurugram, India. Image: Amit Verma
At times, decoding ‘why’ is key to answering ‘why not’. Kushal Karwa didn’t know the difference between the two for four long years. In 2012, the freshly minted IIM Ahmedabad graduate, who had studied mechanical engineering from University of Mumbai, joined global strategic consulting firm Arthur D Little as a business analyst in Gurugram. Over the next few years, Karwa did what he had been doing all his life—approaching problems with a ‘why not’ attitude. His track record made him the youngest consultant at his company. Arthur D Little knew why Karwa had a meteoric rise. Karwa, though, kept the blinkers on. For him, ‘why not’ mattered.The aggressive approach percolated into his daily life as well. Every month, his second-hand car would break down, and a neighbourhood mechanic would tow it away, fix it and hand over a hefty invoice. The ritual continued for four years. The question of “Why are you paying such an exorbitant amount?” was less important than “Why not pay the money and get it done?” Not a bad approach for the young gun; after all, time is money, and Karwa didn’t have an extra second to waste on scanning the problems of his car. Moreover, he was not alone. His IIM A batch mate Amit Bhasin, too, was caught in the same rut in Gurugram: “Why not pay and maintain the status quo?”

One fine day in March 2016, though, Karwa was forced to take a hard look at ‘why’. The maths didn’t make sense: The money spent on repairs was more than the cost of buying the used car. Bhasin too ended up on the wrong side of the calculation. The duo reasoned that the car service and repair segment was ripe for disruption. There were no branded players, the neighbourhood workshops were inefficient, and the quality of spare parts was suspect. The opportunity to make a dent in such an unorganised market was big. The question in front of Karwa and Bhasin was: Can they do it? “Why not?” said the duo, who teamed up with two more friends—Rishabh Karwa and Nitin Rana—to set up a workshop.

The pilot, interestingly, tried to decode a crucial ‘why’: Why had all previous attempts at organising the segment failed? The answer emerged in a month. First, setting up a workshop was suicidal. Reason: Heavy capex. It’s an asset-heavy model, explains Karwa. Such an approach, he lets on, results in taking up a lot of real estate at various locations. ”This means investing and blocking a lot of money,” he says.

The second big reason was not having control over the spare parts’ supply chain. “Genuine spare parts at the right time and at the right price was the right answer,” says Karwa. Running their own workshop for a few months also made the friends understand the nuts and bolts of the business, apart from the pain points of mechanics, and the grievances of consumers.

In April 2016, all four decided to get their hands dirty by rolling out GoMechanic. The business model was kept asset-light. The co-founders converted neighbourhood garages into GoMechanic-branded workshops by offering them standard operating procedures, technological support and original spare parts sourced directly from original equipment makers. An exclusive contract, and a revenue-sharing agreement brought in complete control over the workshops and ushered in uniform pricing and service quality across all the centres. “Consistency in quality of service and pricing are two equally big issues,” says Karwa.

The biggest lubricant, though, was the backing from a bunch of marquee venture investors. In over five years, the brand has raised Rs 439 crore from Tiger Global, Sequoia Capital India, Orios Venture Partners, and Chiratae Ventures.

The backers are delighted with the performance. “GoMechanic is creating an affordable, yet high-quality servicing and repairs alternative for car owners in India,” says Abhishek Mohan, principal at Sequoia India, which first invested in the startup in 2018. With their full-stack approach, he lets on, they are the largest player to aggregate unorganised workshops and provide a seamless customer experience. 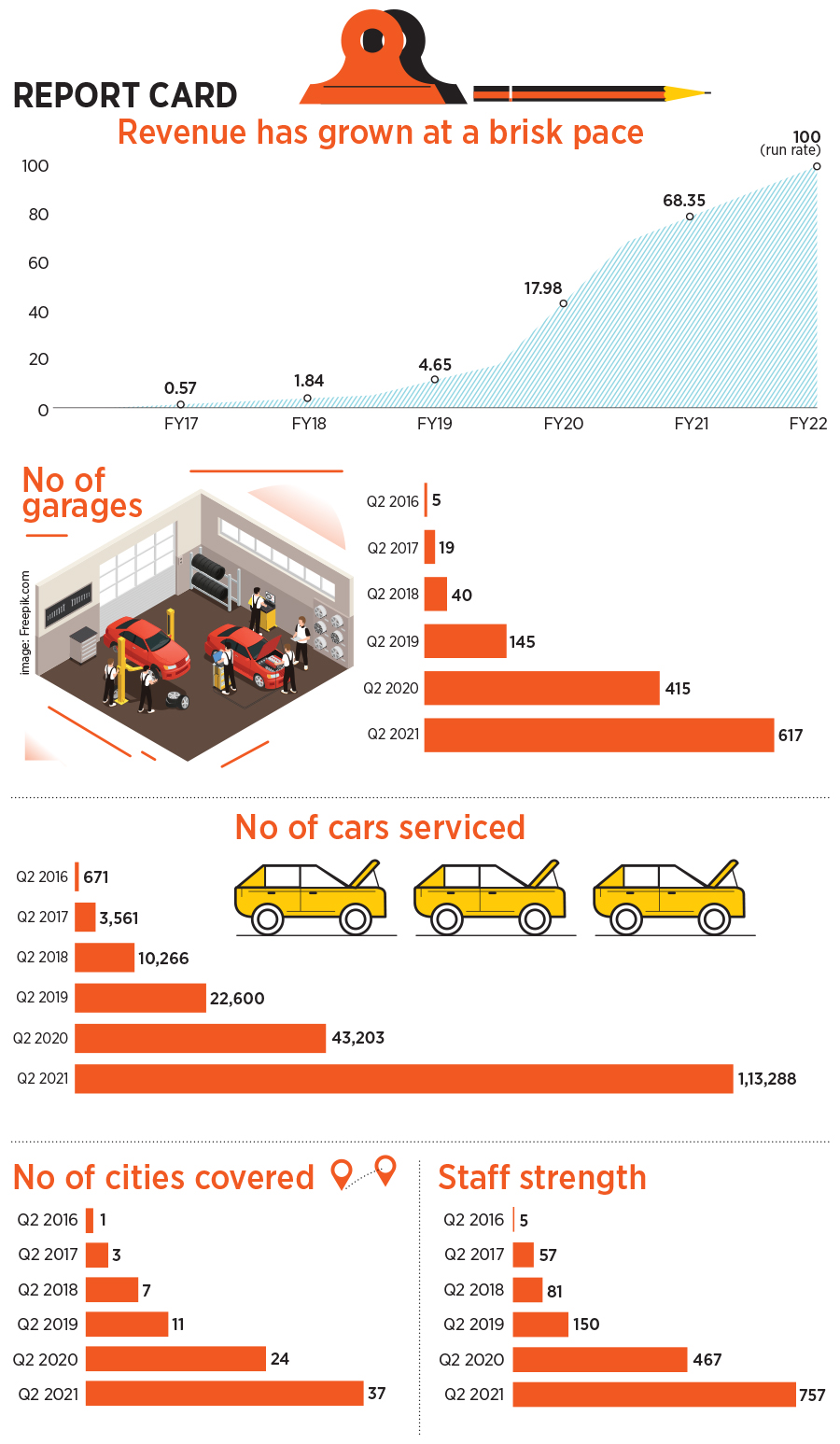 Industry analysts reckon GoMechanic has done an Oyo with its asset-light business model. India, reckon Srikrishna Ramamoorthy, partner at Unitus Ventures, is dotted with lakhs of neighbourhood garages, and only a tiny number of consumers visit authorised service centres. The crux for the workshop owners is spare parts, because that is where they make money. With GoMechanic, the economics make more sense as spares are sourced directly, ensuring quality and decent prices. “The space was ripe for this sort of disruption and GoMechanic is in a great place to do this,” he says. The biggest advantage of such a business model, he explains, is that workshops already exist. “You don’t need to spend money in building that infrastructure.” What the co-founders really had to do was to bring in technology, standardise operations, and build great relationships with owners.

The relationship, interestingly, was not easy to establish in the beginning. The biggest challenge was winning the trust of neighbourhood garage owners. What made things a bit more difficult was that most garage owners had had some bitter experience. A bunch of small players in the segment had earlier tried to solve the problem with a different business model, which involved hefty franchisee fees or service charges. The end result was a deep mistrust, as the model flopped and the blame game started.

Karwa and his team devised a unique strategy. There was no franchisee fee or any disguised service cost. Revenue share was dangled before the garage owners, and here too Karwa sweetened the deal. “Come on board, see the impact, and whenever you get more users, start sharing revenue,” was the plea. It worked.

Five years into the business, the next big challenge for GoMechanic is to expand across India, and beyond. “We have plans to launch in Southeast Asia,” says Karwa, adding that the headroom for growth in the domestic market too is massive. There are over 2.5 lakh small workshops across the country. “We just have over 600 garages now. We plan to scale it to over 4,000 over the next few years.”  Doable? “Why not,” he answers. He, though, is quick to add that he has figured out why the target can be met in a sustainable manner. It’s always ‘why’ that precedes ‘why not’.

Tweets by @forbesindia
Why some companies stood by workers when Covid-19 battered business
Indians unhappy with amendments in smoking law: New report