Stellaris Venture Partners has stayed the path of backing with deep conviction and discipline. But is there a flip side? 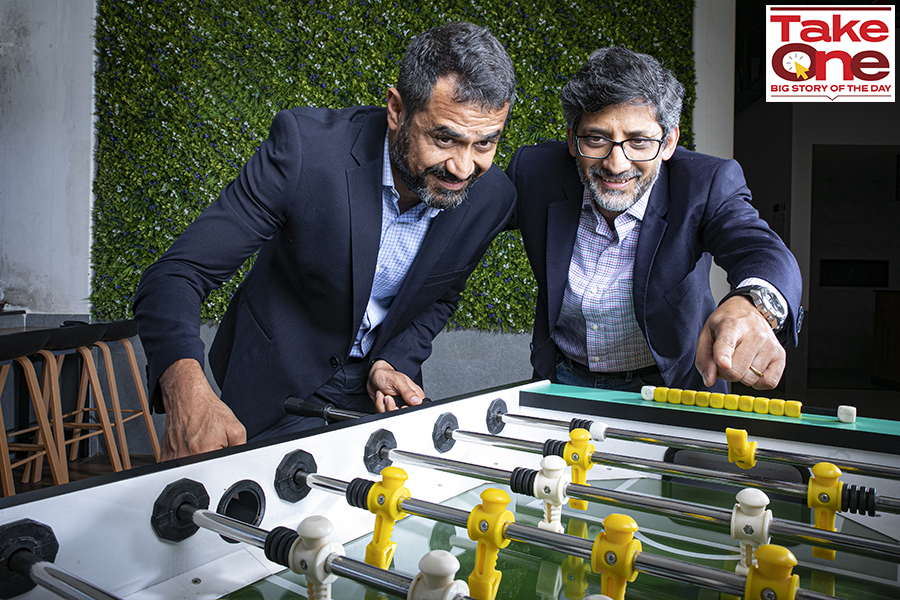 Alok Goyal is enterprising enough to make a candid confession. “This (venture investment) is a business of making mistakes,” reckons the seasoned venture capitalist. Out of every 10 bets that we take, he continues, probably one or two will work. “So there is an 80-90 percent mistake rate in decision making,” says the funder who started his investment journey with Helion Ventures, where he led enterprise software and services investments. In 2017, Goyal teamed up with his former Helion colleagues Ritesh Banglani and Rahul Chowdhri to start Stellaris Venture Partners, an early-stage and sector-agnostic venture capital fund. “We believe that most of the outsized money in venture is made in contrarian bets,” underlines the former chief operating officer of SAP India.

Mamaearth, interestingly, happens to be one such bet. The operating revenue of the D2C skincare beauty unicorn surged 2x to Rs 943 crore in FY22. The profit, though, dropped a tad from Rs 29 crore in FY21 to Rs 14.4 crore. “We believe in investing with conviction, and it can’t be borrowed,” Goyal stresses, adding that Stellaris doesn’t believe in writing a cheque because others are doing so. What differentiates a fund, he underlines, is not its strategy. Reason: Every fund on the ground level is trying to play the same game. Spot the best entrepreneurs, come early in a startup at a low valuation, create big companies and have massive exits. “In a nutshell, that’s everybody’s strategy,” he says. “It is actually the execution that differentiates a fund,” he contends, adding that the DNA of Stellaris is founded on three pillars. First is high-conviction investing. Second is being supportive to entrepreneurs. And the third is being disciplined in investing.

Interestingly, discipline, or the lack of it, is something that the venture world is infamous for. Goyal explains why. The venture industry is prone to cowboys’ behaviour. Most carry a cheque book without admitting that it is not their money. “We are just the guardians of that money. And our LPs (limited partners) expect us to be careful with that capital,” he says. They expect risk-adjusted returns. “Discipline investing is critical to creating a sustained fund,” he adds. 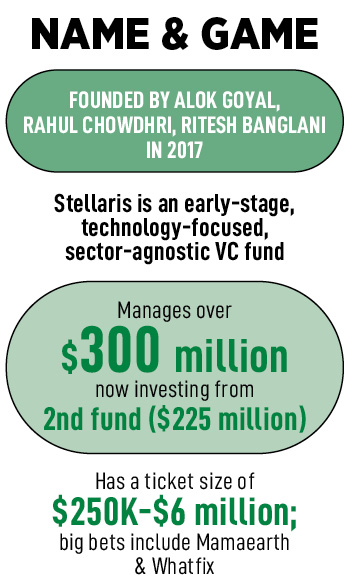 Goyal’s partner jumps in with his take on investing. “It’s perhaps the best profession in the world because we get paid to be wrong 80 percent of the time,” Ritesh Banglani says in a lighter vein. Stellaris, he contends, doesn’t have a ‘spray and pray’ approach. “We don't write cheques where we say ‘hey, I don’t fully believe in this company but let me write a small cheque and see what happens,” says the investor who invested in companies like Taxiforsure, Lifecell, and Trulymadly at Helion. “We don’t write cheques where we have a small ownership,” he says, adding that the company and the founder have never embraced the cowboy approach of betting on as many companies as possible.

The downside of not being a cowboy, Banglani underlines, is that the fund misses out on multiple investment opportunities. “We won’t be able to tell you in 48 hours after our first meeting whether we would invest,” he says. “So we are actually the opposite of cowboys,” he says.

Okay, if not cowboys, then what would best define Stellaris’ style of operations? “I would pick ants,” says Banglani. “They are slow and steady, but they can move mountains when they want to,” he adds. Goyal chips in with his take on the high rate of failure in early-stage investments. Most of the companies, he explains, are either at the concept stage or early product stage. The investors are taking bets on what they believe could be disruptive play over the next decade. “It is, therefore, by definition high-risk capital and consequently mortality is something we have to live with,” he says.

Stellaris too has had a few causalities such as Loca (mobility startup), Allround (edtech startup offering vocational courses to kids), Manch (vernacular content sharing platform) and Wydr (a B2B marketplace) over the last few years. Another troubled startup was Mfine, which reportedly laid off around half of its staff in May this year and eventually got acquired by Lifecell International.

Goyal explains the reasons for mortality. “It’s largely due to three factors. First is when the product-market fit is not being found. Second is the absence of founder-market. And last is adverse market conditions such as Covid. In most of such cases, he underlines, it is the founder’s intellectual honesty in being prudent and shutting down operations. “We’ve seen this in our portfolio as well,” he says. He quickly also points towards a bunch of contrarian bets that have panned out well. 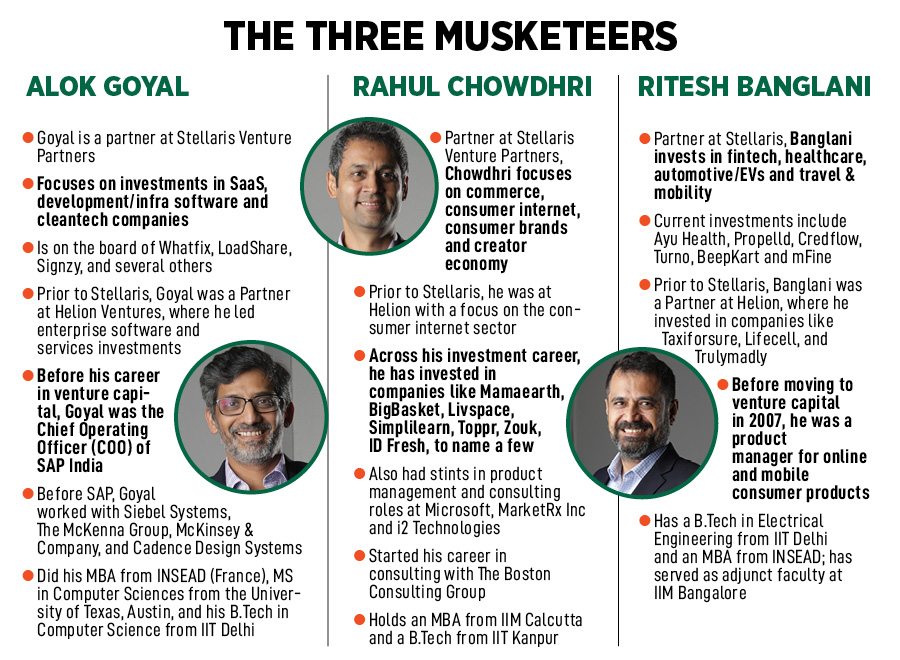 Take, for instance, Mamaearth. “When Rahul (Chowdhri) brought this startup to the investment committee, I think that's probably the most heated debate we have had,” recalls Goyal. “Ritesh and I were up in arms,” he says. The duo tried hard to convince their third partner to drop the idea. The reason was simple. Goyal and Banglani were looking for a founder and a company that was focused in its approach. “If I remember correctly, they had some 42 or 52 SKUs in 2018,” says Goyal. “I thought Rahul has lost his mind,” he says with a laugh. Back then, Mamaearth didn’t have any institutional investor. “That’s the flip side of FOMO. If nobody wants to invest, then I should also stay out,” he underlines. Eventually, the co-founders saw enough merit in backing Mamaearth and the bet seems to be paying off.

Another contrarian bet happens to be Whatfix. The SaaS-based platform provides in-app guidance and performance support for web applications and software products. When Goyal spotted the startup, he was stumped by the quality of the product they had built. There were two founders, one was coding, the other was selling, and they even had a Fortune 500 customer. From an operating revenue of Rs 27.45 crore in FY19, Whatfix has closed FY22 with Rs 172.42 crore. Though the losses too have jumped—from Rs 13.82 crore to Rs 250 crore—Goyal is not perturbed. In FY22, Whatfix’s entire revenue reportedly came from global markets such as America, Europe, Asia Pacific, and the Middle East region. “They are pretty unique because they’re truly going after enterprise SaaS customers,” he says.

Banglani shares why he is not too fixated with the profit mantra. While conceding that the focus on profit had never gone away from the startup ecosystem, the VC reckons that the eventual goal of every venture is to make a profit and generate returns for its shareholders. What, though, keeps changing with economic cycles is how long one is prepared to wait to get to that profit. “When the economic conditions are poor, you want to see the money sooner rather than later,” he says. During the boom cycle, on the other hand, one tends to be okay to wait a little longer to generate profit. “The fundamental trade-off is not between profitability and growth,” he underlines. Most companies in the early stage do not have that profit to begin with. “It is equity that they are investing in growth,” he says. The thing to factor in is how quickly one gets to product-market fit, and not whether one is sacrificing profitability for growth. “The patience of investors gets reduced in cycles,” he says.

A downturn, Goyal reckons, can be a nice opportunity to find good bets even if they are loss-making. “Loss is okay but they should not consume too much cash. We see an opportunity to back such companies,” he says. If the sole metric of investment is profitability, he underlines, then patient investors can take advantage of that choppy market, and invest in companies that have sound fundamentals and are less cash-guzzling. “That would be our strategy in this kind of market,” he says, underlining the contrarian perspective in betting on loss-making companies. “Expecting profitability sooner is neither feasible nor desirable,” he says. The reasons are simple. Startups need to make the investment in building the product, finding the product-market fit and other strategy. “It needs capital, and you can’t cut short those processes,” he argues. Stellaris, he underlines, will stay firm on the path of making contrarian bets with deep convictions.