When the ones cutting the big cheques are chastened by brutal market realities, it's time for everyone in the startup ecosystem to get into the balancing act 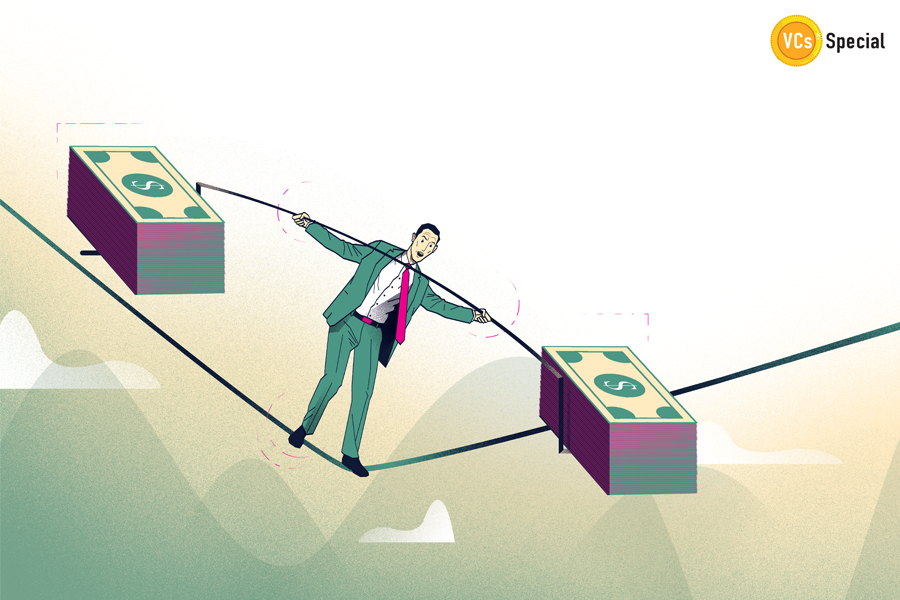 If funders are exercising restraint in cutting big cheques and are balancing their act, founders too need to have a balanced perspective when it comes to growth and unit economics Illustration: Chaitanya Dinesh Surpur

“I believe we were in a valuation bubble,” reflected Masayoshi Son, after SoftBank posted its largest ever quarterly (April-June) loss at $23.4 billion in August. The valuations for unicorns, the swashbuckling investor confessed after the earnings, were (so) high. “We invested in such unicorns as we thought we could get a good return,” he continued, alluding to his analysis that went wrong. “We’ve been making big swings, but couldn’t hit the ball,” rued the maverick billionaire. The founder of Japanese investment conglomerate SoftBank continued with his brutal introspection. “If we had been more selective and invested better, we wouldn’t have received this heavy blow,” he concluded.

Back home in India, seasoned investor Mohan Kumar was not left with much choice but to be selective during the heady valuation year: 2021. “I almost stopped investing,” says the founder of Avataar Venture Partners, a growth-stage venture capital fund investing in SaaS, deep tech and B2B marketplaces and transaction platforms. During the peak of the pandemic, SaaS companies started getting 40x valuations. “Some even got 100x,” says Kumar, underlining that during the ‘sane’ period (pre-Covid), the average valuation was seven to 10 times of revenue. Kumar, who started his fund in 2019, contends that the days of heady valuations are over. “It has started to get back to normal,” he reckons, underlining that the impact of the inflated bubble would become clear next year. The smart founders who were balanced and didn’t burn cash would survive.

Niren Shah reinforces the virtue of being ‘conservative and thoughtful’. While the cheques will keep coming—albeit in smaller sizes during the funding winter—founders as well as funders have to get into a balancing act. The managing director and head of Norwest India reckons that his investing philosophy over the last 15 years has been to ‘dodge bullets’ rather than ‘firing bullets’. What Shah alludes to is the strategy of being hyper selective in making investments and ensuring the portfolio looks lean and mean. “I can guarantee you that that among venture capital, we will have by far the highest slug ratio,” he claims. In baseball, he explains, slug ratio is how many hits one has had as compared to misses. Out of the 22 companies in his portfolio, 16 are profitable, and seven are unicorns. “You might call us conservative, but we have been thoughtful,” he says.

The story, though, looks different for early-stage investments in India, which seem to have so far survived the funding winter. Look at the numbers. From $5.1 billion in 2019, the funding understandably dipped to $3.6 billion in the pandemic year. The subsequent year, though, it bounced to $8.7 billion, and in the first three quarters of this year, it has touched $7 billion. Now contrast it with late-stage funding which peaked in 2021 at $32.3 billion, but in the first nine months of this year has shrunk to $14.2 billion, according to data shared by Tracxn, which provides market intelligence data for private companies.

Also read: 3 Ps of profitability: How to bring Indian startup unicorns into the black

For this ‘VCs special’ issue, Forbes India interacted with a wide section of early-stage and growth-stage VC firms. The funders, irrespective of their stage of investment and level of involvement, were unanimous about four things. First, raising big capital would still be tough over the next year or so. Second, the era of skyrocketing valuations is a thing of the past. Third, the market will continue to see prolific early-stage investments as it has stayed largely immune from the valuation bubble. What has also benefited is the low ticket size of funding during the early stage. And lastly, if funders are exercising restraint in cutting big cheques and are balancing their act, founders too need to have a balanced perspective when it comes to growth and unit economics. “Scale fast and fail fast won’t work at least for now and over the next few quarters,” says a VC requesting anonymity. “All of us need to get disciplined if we need to survive the winter,” he adds.