Banks, fintech companies and payment solution firms get a shot in the arm as demonetisation suctions out 86 percent of currency in circulation 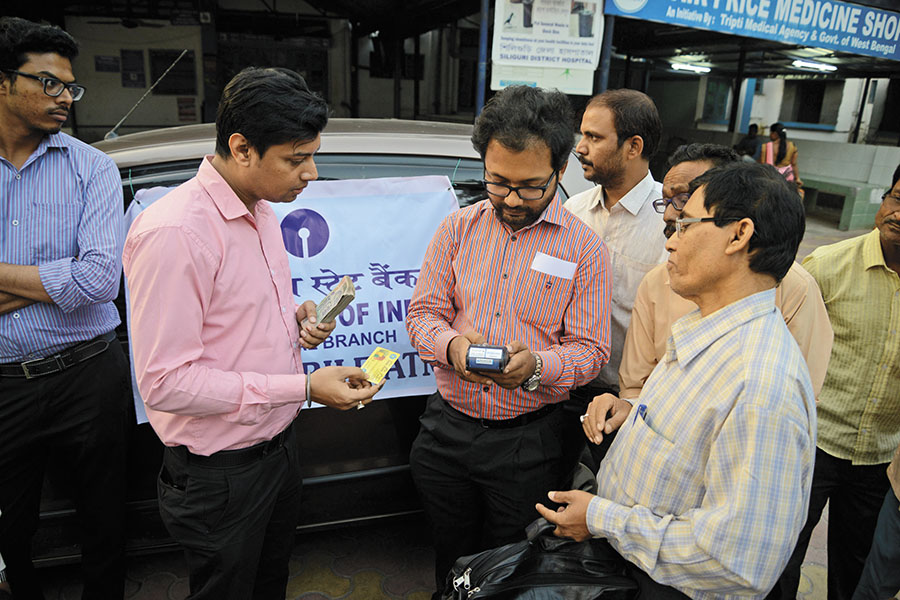 The government’s demonetisation move has given a fillip to banks’ digital and mobile platforms
Image: Diptendu Dutta / AFP / Getty Images

Ever since the central government’s November 8 announcement to replace Rs 500 and Rs 1,000 notes with new ones, the term ‘demonetisation’ has become synonymous with images of thousands making a beeline at bank counters to exchange old notes, even as ATMs are being recalibrated to disburse new ones.

The flow and usage of currency have been hurt due to a shortage of new Rs 500 notes even as Prime Minister Narendra Modi’s sudden move eliminated nearly 86 percent of the currency in circulation. The government’s aim was to attack counterfeit cash (which is allegedly being used to fund terror activity) and clean up the ‘black money’ in the system.

Between November 10 and November 27, bank deposits totalled Rs 811,033 crore and exchange of old notes totalled Rs 33,948 crore, according to the Reserve Bank of India. Banks have also reported that during this period, people withdrew Rs 216,617 crore from their accounts either over the counter or through ATMs.

With currency notes in short supply, discretionary spending on items such as luxury cars, gems and jewellery and real estate will be impacted, but the banking sector, over the medium term, will see gains, according to HDFC Bank’s Investment Advisory Group. Banks, financial technology (fintech) companies and payment solution firms—who have been wooing customers with digital transactions—have got a further boost.

Over the past two years, India’s financial services sector has been undergoing a shift in structure with new payment banks, small finance banks and insurance players entering the field. So, besides sales agents, banks, distributors and financial services firms are using digital and mobile platforms to enhance their investor reach. Consumers, in urban and rural India alike, will have little option but to run their lives with ‘less-cash’ and accept digital transactions.

Axis Bank now sees more interest being evinced in Axis Pay, a Unified Payment Interface (UPI) application, wherein customers—regardless of which bank account they hold—can make and receive payments instantly using only their names (in the form of a virtual payment address). The bank’s managing director and CEO Shikha Sharma has called the UPI system a “WhatsApp moment” and an “audacious” innovation for payments in India.

HDFC Bank is also witnessing more traction for the various digital payment solutions it has rolled out since 2012. The bank now has 71 percent of its financial transactions being carried out through the internet and mobile phones, compared with about 44 percent in FY13. “Demonetisation is like a booster shot for our digital activity,” Nitin Chugh, HDFC Bank’s digital banking head, tells Forbes India.

Chanda Kochhar, MD and CEO of ICICI Bank, in November-end announced plans to transform 100 villages across India into ‘digital’ economies in the next 100 days. This will involve enhancing access to digital technology, imparting livelihood training and providing credit linkages for those residing there to help them earn their livelihood. ICICI Bank says in their ‘digital’ villages, people will be able to open bank accounts using the Aadhaar-based e-KYC (know your customer) and help them make cashless payments through a unique SMS-based mobile system. The villages to be adopted across India are largely agriculture-based economies, Kochhar says. “Work has already started at some villages in Maharashtra, Tamil Nadu and Rajasthan.” The move is an extension of ICICI Bank’s drive for financial inclusion and adoption of digital technology. In 2015, it had converted Akodara, 85 kilometres north of Ahmedabad, into a ‘digital village’.

HDFC Bank’s Chugh says post demonetisation, there is a high insistence to increase “acceptance” in the banking network, which means improving the digital acceptance of products for merchants, rather than merely introducing payment solutions for customers.

Chillr, one of HDFC Bank’s early mobile applications—which allows people to immediately send money to anyone in their phone’s contacts list—has seen dramatic growth. Launched first for HDFC Bank in March 2015, it recorded Rs 5 crore transactions per day in July 2016 alone compared with the same number of transactions cumulatively between March and July 2015.

To further its digital drive, HDFC Bank has identified two financial technology startups, FingPay and ToneTag, whose services it plans to offer to its customers in 2017. FingPay is an Indore-based payments solution firm which allows customers to shop using just their biometric authentication in retail markets, without the use of mobile phones, cash, wallets or credit cards. HDFC Bank has already tied-up with ToneTag, a Bengaluru-based “proximity identification” startup, which allows people to pay by making use of sounds.

Economists, however, say India will face disruption due to the sucking out of a majority of the cash from the system. Dharmakirti Joshi, chief economist at Crisil, says the demonetisation move was a ‘one-of-a-kind programme’ not seen anywhere in an economy as large as India. “Spending activity is starting to get impaired in discretionary spending,” he says. “The adverse impact of demonetisation will be seen for two quarters. It will improve once liquidity returns.” Joshi forecasts that India will go cashless faster than several other economies. “Digital technology will allow us to leapfrog.”

HSBC’s chief India economist Pranjul Bhandari has warned about a slowdown in growth. “We are currently staring at a mixed bag. While demonetisation followed by ‘remonetisation’ (issuance of new notes) could be positive for inflation and banking sector liquidity in the short run, effective money supply and growth will take the bullet,” Bhandari says.

She estimates that India’s GDP growth could fall by 0.7-1 percentage point over a year, with the maximum impact in the immediate two quarters. India’s economy grew by 7.3 percent in the three months to September and remains one of the fastest growing large economies in the world.

Tweets by @forbesindia
As a minority shareholder, I have been left in the lurch: C Sivasankaran
'Being sought to be removed since I chose not to follow Tata diktat': Nusli Wadia