For R Balki, it all comes down to the story

Group chairman of MullenLowe Lintas Group and writer-director, R Balki, talks about the traits that shape him as a storyteller 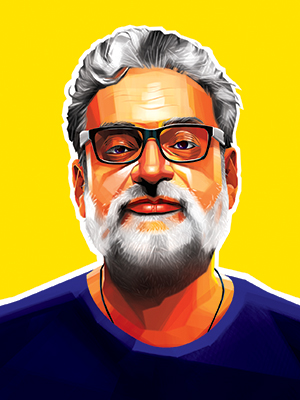 As group chairman of MullenLowe Lintas Group and a writer-director, R Balki, 52, has been a part of several award-winning projects. Consider ad campaigns like ‘Walk when you talk’ (Idea), ‘Daag achhe hain’ (Surf Excel) and ‘Jaago re’ (Tata Tea) or films like Cheeni Kum, Paa and Ki & Ka. He tells Shruti Venkatesh about five traits, developed during his 25-year journey in the communications space, that shape him as a storyteller.

Chasing the idea
Be it a 30-second ad spot or a two-hour film, the only thing that motivates me is the idea. Everything else about film-making—scripting, directing, post-production—demotivates me because I need to spend over a year on it and it is a painful process. That is why there are two-three years between my films. It is only Ki & Ka (2016) that I made immediately after Shamitabh (2015) because the idea excited me.

Perfectionism
All advertising campaigns at Lowe are close to my heart and, at the same time, very far away from my heart. The reason for this is that though I am greatly enthusiastic when I am doing them, I always find faults with them once they are complete. In fact, I keep switching channels every time an advertisement made by us comes on screen because something will be wrong and then I get very disturbed.

Trust in the story, not the promotion
I hate marketing a film. I feel a film should just have a trailer; people should see it and decide if they want to watch the film or not. Agreed, today there is so much content that for people to just know there is a film like yours requires that kind of marketing. However, I am not sure that if people know there is a film like that, they will necessarily go out and see it. We are pushing 95 percent for an extra 2-3 percent. That’s what upsets me. I am very clear that I am not going to market the next film that I make. I will just put out the trailer and say this is the film, you may choose to go and watch it.

Apathy towards reviews
I don’t read [film] reviews at all. For me, everybody’s approval matters. But the fact is you are never going to get everybody’s approval. So I seek the approval of a person who does his job really well. I love being thrashed by a critic who does his job really passionately. Essentially, I want people bowing to their craft, not mine. Critics are supposed to love the art of critiquing, which is different from criticising. Unfortunately, there are many callous people in that space and I get annoyed with them.

Creating aspirations
When watching my film, I want the viewer to say, ‘I want life to be like this’; not, ‘I am like this’. There must be some similarities of course, but the ‘I wish’ element will always be present in my films. I feel that there is a little bit of Disney that you should keep bringing into every bit of life. Personally, I wish I had thought of Moondram Pirai (the 1982 Tamil film, which was remade in Hindi as Sadma the following year). That is the only film I envy.

In this series, we talk to entrepreneurs and celebrities, artists and musicians, about what they need to be who they are

Tweets by @forbesindia
Track your lunch with HyperTrack
Wildcraft: The backpackers with sales worth Rs 300 crore