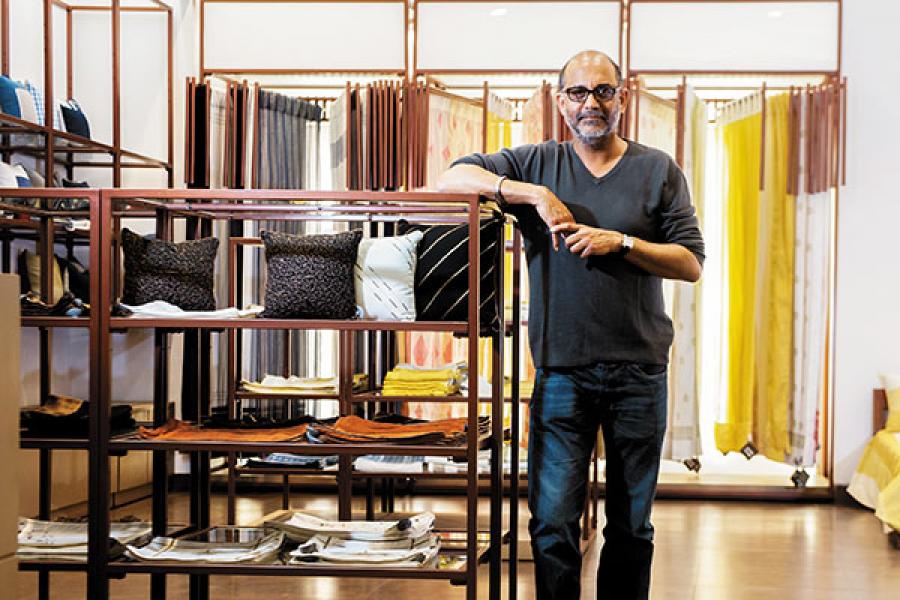 Image: Bmaximage
Kunal Rohit Sachdev, the founder of Caravan Craft, learnt the ropes of business with retail biggies like ITC and Hidesign

For three years, Kunal Rohit Sachdev, 50, persistently wooed Dilip Chenoy, managing director and CEO at the National Skill Development Corporation (NSDC), to raise funds for his venture, Caravan Craft Retail. When he first approached Chenoy with the proposal in 2009, the initial response was a curt “we can’t do it”. Sachdev, however, refused to give up.

He finally convinced NSDC to fund his project with a total commitment of Rs 42 crore spread over four tranches. Of this, the Bangalore-based company got its first sum of Rs 8 crore in 2013. The same year, it managed to get Unitus Seed Fund on board, raising Rs 2.5 crore from the fund backed by billionaire venture capitalist Vinod Khosla.

Public sector outfit NSDC usually funds skilling and training-based projects. Caravan Craft works with the artisan community to create merchandise across apparel, jewellery, accessories and home décor, weaving in India’s traditional handicrafts with global fashion trends. By deciding to pump in money in Caravan Craft, NSDC was, for the first time, backing a model that is not purely a skilling initiative.

Why did it take such a unprecedented step? Because the retail venture looked scalable and sustainable to NSDC, a not-for-profit company started by the finance ministry under a public private partnership model. “The Caravan story was exciting in terms of linking skill development to markets and looking at involving artisans across the value chain. It seeks to increase the number of artisans across trades by providing them design inputs, linkages to market and a share of the profits,” says Chenoy.

Sachdev picked up the nuances of running a successful business during the 25 years he spent in the retail industry, including stints with top brands like ITC and leather goods manufacturer Hidesign. The idea of Caravan Craft germinated during his last assignment with Pondicherry-based Hidesign.

“While travelling overseas, I saw that large department stores responded to the merchandise that Hidesign put out. The reaction had more to do with the characteristic that Hidesign represented, the culture that the brand had and the handcrafted techniques it used to create the final product,” says Sachdev, who quit as CEO of Hidesign in September 2008 to start his venture.

Caravan Craft began with an initial capital of Rs 75 lakh and has two outlets in the country—in Bangalore and Pune. There are plans to open a store in Mumbai in some months.

The Bangalore store—Caravan’s first retail outlet which opened in November 2013—is close to breaking even. Overall, the company has clocked revenue of over Rs 90 lakh in the last seven months, including sales from its store in Pune, which started this March.

Caravan’s products are categorised under three large verticals—apparel, jewellery and home—with apparel constituting over 50 percent of the business. While some argue that Caravan’s products are similar to the kind of merchandise sold in stores like Fabindia, Bandhej and Anokhi, Sachdev says there is a clear differentiator and distinct customer connect. He points out that the cuts and silhouettes of Caravan’s dresses follow a simple Western pattern, while the detailing in design has a distinct Indian craft touch. The colour palettes of women’s apparel, however, are fashioned from the latest trends on international runways.

“Our emphasis on deep design intervention with artisans helps create merchandise which is aligned to global fashion trends and has a wider international appeal. Other brands have their own distinct philosophy and identity. I don’t think a comparison is fair,” Sachdev says.

Expansion is the buzzword for Sachdev now. Caravan Craft is in talks to set up its franchise outlets in tourist locations like Goa, Kochi, Jaipur, Mysore and Pondicherry. It is also exploring opportunities through ecommerce platforms and duty-free outlets at Bangalore airport through a tie-up with the Nuance Group, a travel retailer with presence in over 20 countries. An outlet will soon open at the Mumbai terminal too. “People were curious. They came to our stores, used our products, and spoke about us. Now we have a loyal customer base,” Sachdev says.

Sachdev has also set the ball rolling in international markets, focusing on France and Switzerland for now. On his return from a recent business tour in Europe, he told Forbes India that the company is launching the brand with a leading department store in Switzerland in the current quarter. “We have appointed a distributor in Switzerland. In France, we have initiated talks and are in the process of appointing someone soon,” he says.

The product portfolio will initially include jewellery, and women’s apparel and accessories. “We would probably be the first Indian brand to have a presence in that store. Based on the response, we will look at setting up a shop-in-shop with them,” says Sachdev. “We would want to get a sense of the customer feedback. With that experience, we will gradually start expanding in the rest of Europe, the UK, Middle East and Japan,” he says.

In addition to the remaining funding from NSDC, Caravan Craft aims to raise about $6 million for  global expansion. “We are in talks with some funds,” says Sachdev.

According to reports, India accounts for less than two percent of the handicrafts export market globally despite the sector being the second-largest employer after agriculture. The Indian handicrafts market is pegged at about $8.3 billion of which over $2.7 billion is exported. “The government is spending money in training people for employment, but there is no market context. Unless you spin the whole model and create a market for crafts, it would be difficult to have an impact,” says Sachdev. Last year, Caravan Craft trained over 500 artisans across the country. It is looking at training 17,000 more in the next two years.

Bijou Kurien, member, strategic advisory board, L Capital Asia, the private equity arm of French luxury giant LVMH, feels Caravan seeks to bridge the gap between tradition and modernity. “It has the ability to create a distinctive brand which will appeal to the discerning domestic and international customer through a network of online and offline stores,” says Kurien, who is going to invest in Caravan soon.

According to Sachdev, the biggest challenge is drawing in new customers. And for a new brand like Caravan, another test is to get revenues aligned to property rentals. Its complex manufacturing process is a key challenge as well. “For example, we pick up muslin from Bengal, send it to Jaipur for tie and dye before fabrication in Bangalore. Apparel has the most complex supply-chain model. Typically, it takes about 100-odd days for a finished product,” he says.

As Sachdev gets ready for Caravan’s international foray, he plans to control the product and brand, while outsourcing the entire back-end operations. The Caravan has just begun to roll, and Sachdev is not scared of the long journey ahead.

Tweets by @forbesindia
For IT giants, cloud computing delivers what it promises
How Urban Ladder climbed atop the furniture business