Retired life for an Infosys co-founder and former CEO is inevitably different. Take SD Shibulal who is funding startups, making security gadgets and building a social network for his wife's charitable foundation in his second innings 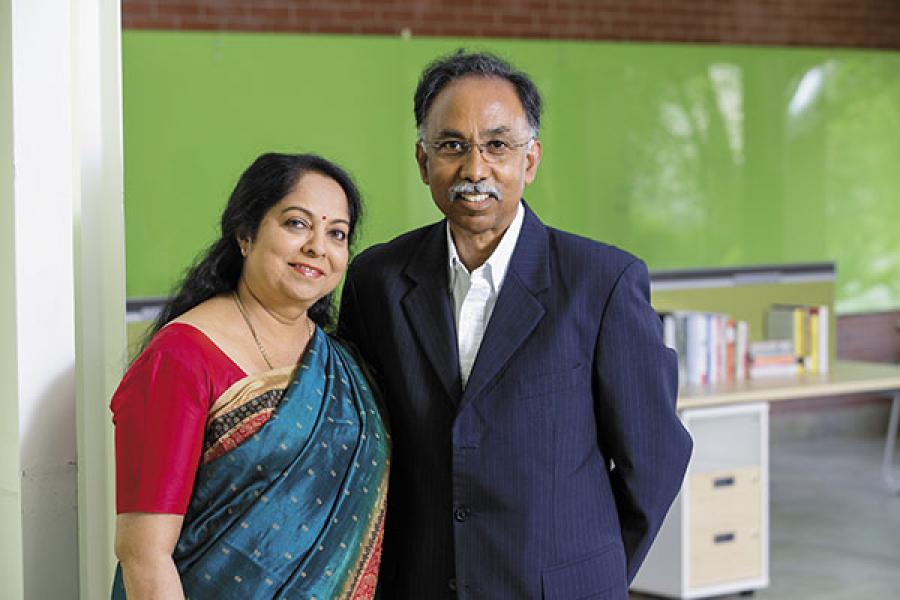 Once the spotlight moves away and the roar of the audience dies down, the silence that follows can be as deafening as the clamour preceding it. However, SD Shibulal is as much at ease in this new-found quiet as he was in the high-profile role of chief executive officer and managing director of Infosys Limited between 2011 and 2014. But then, retirement takes on a different meaning when you’re one of the founding fathers of a $8.7 billion information technology giant, and when your net worth is $1.01 billion. (He ranked number 99 in the 2014 Forbes India Rich List.)

On June 12 last year, Shibulal, now 60, announced that he would be leaving the company he had co-founded 34 years ago. He chose to retire almost a year before his tenure was scheduled to end. The weeks after July 31 (his last day at work) followed the usual pattern of retired life: Time with family, a well-deserved break and plans for multiple holidays. But the Bengaluru-based billionaire had also laid the groundwork for a fulfilling, fruitful and profitable retired life. “Shibu (Shibulal) always had a plan B,” says his friend and former vice president at Infosys, Murali Krishna. This involved nurturing the next generation of entrepreneurs, launching startups and expanding the scope of his family’s philanthropic foundation.

“After taking a break for a few days, I started going to our family office [Innovations Investment Management headquartered in Bengaluru],” Shibulal tells Forbes India. The firm manages the family’s wealth, and invests in startups and businesses in the hospitality, real estate, plantation management and organic farming sectors. “I had not been visiting the office regularly all these years. My daughter Shruti, 29, is mostly involved with it. But now, I’m getting to know all the staff,” he says.

These are early days and Shibulal is unwilling to comment on these investments yet. But the billionaire entrepreneur, who is known for his reticence, can’t contain his excitement over Falcon, a child-security tracker and Axilor’s first technology product under its entrepreneur-in-residence programme. “There are many concerns about transport security for children in schools. Today, parents are under a lot of stress when their child travels 10-20 km in school buses. It is also a challenge for schools to secure the transport mechanism. My idea germinated from these concerns,” says Shibulal, who made an initial (undisclosed) investment and got a 20-member team, startup Purnatva Solutions, to further develop the idea and build the product. “I sometimes help them with technical support, if required. This business will be developed under the Axilor umbrella,” he says.

Falcon uses global positioning software to track school-going children on bus routes, pick-up and drop-off points, and even guardians or nannies who accompany them. The product is already being used by three schools in Bengaluru, and Purnatva Solutions, under Axilor’s guidance, is targeting a pan-India launch. Shibulal says once the venture gets a certain level of traction, the team will take a call regarding external funding.

Falcon reflects Shibulal’s love for making gadgets. “I’m very interested in technology and always wanted to develop products that will solve an issue. We will identify big problems and then work on solving them through technology. It’s not necessary that I have to develop all the ideas myself. We will get a team of professionals who will work on that,” says Shibulal, who has a masters in computer science from Boston University and in physics from the University of Kerala.

There is a high probability that the entrepreneur will channel his passion for technology and gadgets into his desire to ensure that no child is denied education. He has already started down this path by developing an online platform called Vidyadhan, which allows people from all over the world to sponsor a child’s education in India.

Launched in May 2015, this programme is an initiative of the Sarojini Damodaran Foundation (SDF), one of the two philanthropic ventures run by the Shibulals. It provides need-based financial assistance to class XI and XII students as well as to those pursuing degree courses such as medicine and engineering.

Shibulal’s wife Kumari Shibulal, who is managing trustee for both SDF and the family’s second charitable organisation, Advaith Foundation (which runs two schools), says: “We started the Sarojini Damodaran Foundation about 15 years ago with two children who passed class X from the same school in Alappuzha [in Kerala] where he [Shibulal] studied. It was financially difficult for them to continue pursuing higher education.” There are plans to increase the number of student beneficiaries from the current 738 to 10,000 over the next five years, but for Shibulal, the numbers are not enough. “There is a limit to anything that we do in life. We can support children up to a certain number, but the need is much higher,” he says. 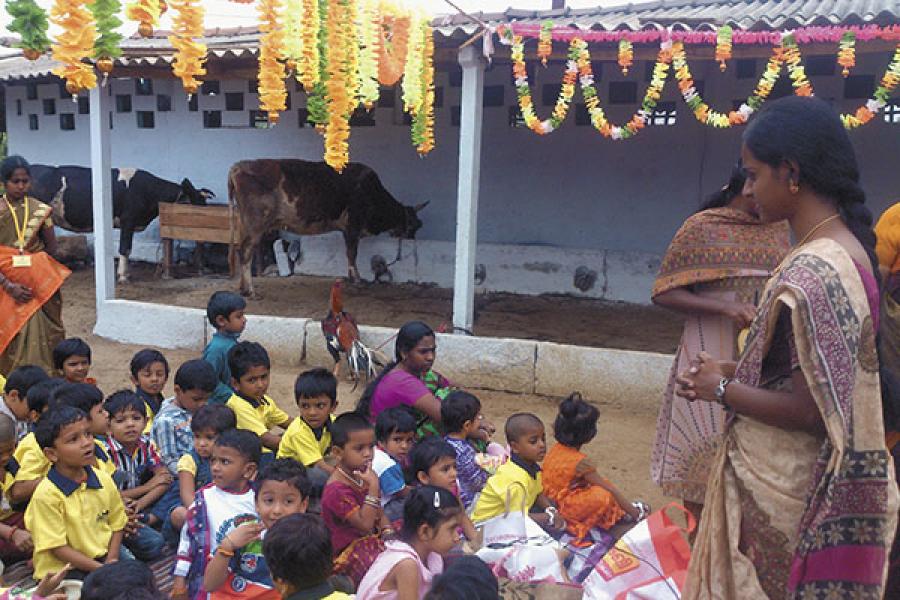 Image: Mallikarjun Katkol for Forbes India
The Samhita Academy, a school run by Advaith Foundation, educates both the poor and well-to-do children

This is where Vidyadhan’s impact can be felt the most. In less than two months since it was launched, it has identified 60 students in Karnataka (most are in their first year of college) and another 50 (class XII students) in Kerala. So far, it has received $80,000 by way of donations from 39 sponsors. “The new model will help connect with a global audience; people who can sponsor a child’s education,” says Shibulal, adding that all credit must go to his wife. “It is Kumari’s programme, I’m just the technical person. I’m working with her on the technology front to build the platform, while she is looking at the administrative part.”

His wife and he have been involved with philanthropic ventures for over 15 years. Last year, they pledged about Rs 36 crore to the Sarojini Damodaran and Advaith foundations. “The challenge is that the need is much higher than the support that we can provide,” says Shibulal, who has also started spending at least two days a week at the foundations’ headquarters in Bengaluru (that is when he is not travelling).

Asha Thomas, 49, executive director of The Samhita Academy, a school in Bengaluru run by the Advaith Foundation, tells Forbes India that she has learnt compassion and humility from Shibulal. “Despite his hectic schedule and constant travelling, whenever he is in Bengaluru, he likes to have a meal with the children during the weekend. He is a positive role model for the students, a very good mentor and guide.” The academy has adopted an integrated approach, teaching both underprivileged children and those from financially sound backgrounds. “He [Shibulal] is very rational in his approach.” says Thomas, who worked at Infosys between 1988 and 2004.

These days, Shibulal divides his time between the development sector focusing on philanthropy and the corporate world through his advisory and board roles. At present, he’s a member of the World Economic Forum’s Global Agenda Council on Emerging Multinationals and co-chair of The Confederation of Indian Industry’s (CII) National Committee on IT-ITES and Ecommerce. He is also the chairman of the board of governors of the Information and Communication Technology Academy of Kerala and sits on the board of Boston University in the US.

Murali Krishna, 51, who has known Shibulal for over three decades, describes him as a master of time management, juggling his many roles with ease. “Shibulal’s way of giving back is not just in terms of money. His model is to bring in the money to the table himself and also get the people and processes involved,” says Krishna, who left Infosys in July 2014, and is now a director at the National Institute for Leaders in Education (NILE) in Bengaluru. As the name suggests, NILE—an education initiative started by the Shibulals—aims to enhance the leadership skills of principals, directors, professors, trustees and other professionals in the primary and secondary education sector.

“He is very process-oriented. If you look at the processes at Infosys today, you will see that he is their architect,” Krishna adds.

Shibulal is not afraid of hard work either. In a 2014 interview with Forbes India, his daughter Shruti had described her father as the hardest-working person she knows. “His work ethic is incredible and worth admiring. When you run a business, it is not just about numbers, but also how you take care of your people,” said Shruti.

Her father, however, is no stranger to hardships and criticism, which only grew when he was heading Infosys. “I took over amidst a very difficult environment. Externally, we were just coming out of an economic crisis, and the macro conditions were uncertain and volatile. We were faced with several challenges internally as well,” he told Forbes India in a June 2014 interview, after announcing his retirement. He could not stop key high-profile exits during his tenure, which also set tongues wagging.

But in the end, he acquitted himself well. Despite widespread criticism from analysts and the media, Shibulal managed to double the company’s revenue growth; it crossed Rs 50,000 crore in annual sales for FY14. Lawsuits, which plagued the IT company in its biggest market, the US, were resolved. He set Infosys on a path of course correction.

In many ways, Infosys will always be a part of Shibulal’s life. After all, he has a 0.43 percent stake (as of March 2015) in the software-services giant, and earned Rs 14.56 crore in tax-free dividends for FY15. He can never quite escape the public gaze, even though all attention is being trained on Vishal Sikka, who took over the mantle as CEO and MD last year. Under Sikka, the Infosys juggernaut is gathering steam.

In the meantime, Shibulal, in his own inimitable and quiet way, is working on personal projects. Life a few steps away from the spotlight suits him just fine.

Tweets by @forbesindia
Selling groceries online is tough: Localbanya COO
The art of the steal