The story of how Mad Over Donuts pipped Dunkin 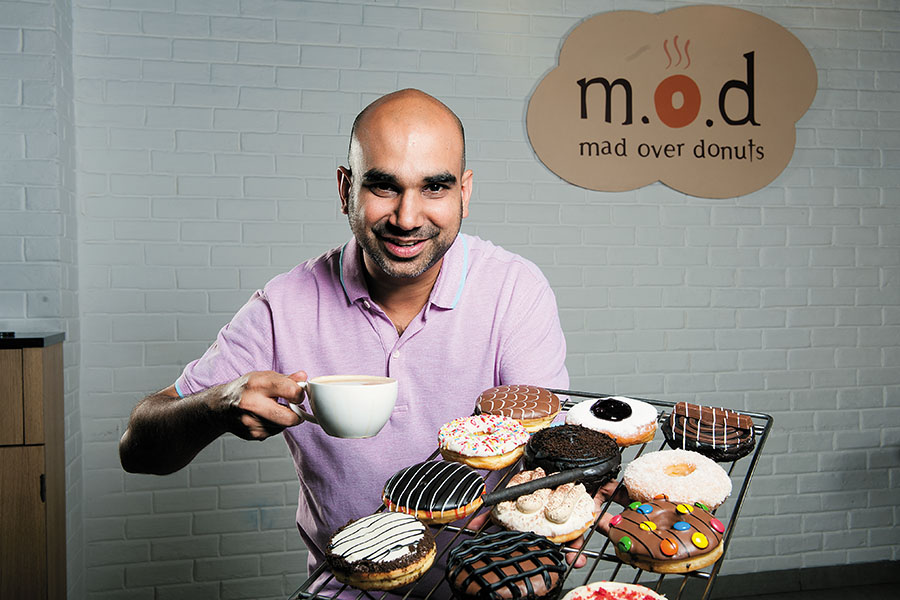 Lokesh Bharwani narrates the Hare and Tortoise story to his son almost every night. And the six-year-old—hooked to car racing games—unfailingly asks how the slow tortoise can win the race. For Bharwani, founder of Mad Over Donuts (MOD), speed is an anathema and the tortoise the hero.

In a decade since MOD rolled out its first outlet in Delhi in 2008, it has expanded to just four cities with 51 stores. In contrast, American brand Dunkin Donuts began its India innings in Delhi in 2012 and by the first quarter of 2017, raced ahead with a presence in 23 cities and 77 outlets.

Fast forward to 2019 and there is a twist in the tale. Dunkin’s existence has shrunk to 10 cities and 30 stores whereas MOD is steady with 58 outlets in four cities, making it the biggest donut brand in India. The brand enters Chennai this year, Hyderabad in 2020, and intends to increase its store count to 100 in six cities by next year.

“There was no rush to go crazy horizontally,” says Bharwani, explaining his decision to go for vertical expansion in the four cities rather being all over the place. “We are confident that we will have our market,” he adds and goes on to say that now the plan is to scale up and grow aggressively. Back in 2008, the reality of the donut business helped Bhawani temper any notions of speeding that he may have entertained.  The donut was an alien and non-mainstream product. The concept of breakfast-on-the-go was missing and the donut was, at best, a snacking option. “When we started, very few people knew what donuts were or how they looked,” he recalls.

Bharwani resisted the temptation of expanding to multiple cities by opening a solitary outlet. Going deep into one city made more sense.

First, it helped gauge the mood of the consumers. Second, multiple exposure points in one city helped people get familiar with the product.  Third, being present in a top metro also meant that a sizeable section of travellers would get accustomed to the product in overseas markets, and then familiarity would drive consumption.

More importantly, Bharwani wanted to err on the side of caution. “I wanted to be profitable before scaling,” he says, claiming that the brand closed FY19 at a little under ₹60 crore and is profitable.

MOD, reckon branding experts, made a smart move by taking a sedate approach. “It is not easy to change snacking or food habits,” says N Chandramouli, CEO of TRA Research, a brand insights company. A brand that stays invested in a country over time, understanding the habits and choices of customers, has a much better chance of making inroads into the hearts and stomachs of its people. The vertical, ‘go-deeper’ strategy of MOD was appropriate because India is many countries with different tastes.

Today, the brand has crossed the experimentation and understanding phase. “Now it can use its experience and knowledge of India to invest money in growing the market faster,” says Chandramouli. “The investments of the last decade are sure to pay off.”

MOD’s journey was not without its share of trial and errors. An early mistake was opting for a business model focussed on ‘takeaway’ rather than experience. Though smaller store sizes reduced operational costs, they came with a price: Indian consumers loved to spend time at the store. Even with a grab-and-go product, recalls Bharwani, people needed those five minutes to eat before they moved on. This realisation made him open new stores with a seating capacity of about 10 people. “They turned out to be more sustainable than the zero seats one,” he says.

What turned out to be the biggest differentiator for MOD was that it has stayed true to its name. “The reason people walk into our stores is donuts,” says Bharwani. Other offerings of the brand, he explains, would complement donuts, not overshadow them. “We never competed with a pizza or burger brand.”

Food experts believe MOD has the right product and inward focus. “MOD insulated itself from what was happening outside,” says Bakshish Dean, celebrity chef who brought American restaurant franchise Johnny Rockets to India.

Unlike the West, donuts cannot replace what people have for breakfast in India. “This explains why it took so long for MOD to keep itself confined to just four cities. And the patience has paid off,” says Dean.

Sticking to the fundamentals of the business also yielded fruitful results. “Making each outlet cash positive before moving to the new one was a trick that worked,” says Dean. He explains that not scaling up at a brisk pace may look less glamorous, but hasty expansion leaves a bad taste. “Speed is an addiction, and at times a wrong one,” explains Dean.