The Apollo Hospitals Prescription for Tomorrow

Two-thirds of the Indian family-owned businesses have a succession plan in place, just 15 percent have one that is "robust and documented"

As family-controlled companies get hungrier for growth in a competitive business environment, one of the key areas on which most family-owned organisations are beginning to focus is the issue of succession. This typically has two aspects to it. One, any succession plan will need to ensure that the new structure being put in place does not impinge on the growth momentum of the business. Second, in cases where there are multiple family members involved in the business, the plan will also need to be fair to the aspirations of all. Family business experts say, in some cases, patriarchs also think of diversifying into new areas to satisfy entrepreneurial ambitions of individuals. 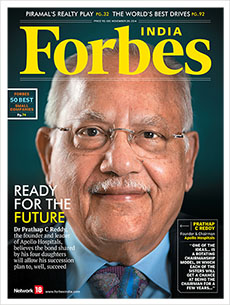 However, these are still early days. A 2014 Family Business Survey by PricewaterhouseCoopers, which spoke to decision makers in nearly 2,400 family businesses across 40 countries, has found that only 16 percent of family-run firms have a “discussed and documented” succession plan in place. But the good news is that about 83 percent have at least one procedure in place to deal with conflict, up from 79 percent two years ago. The data for Indian family-run companies is not very different either. While two-thirds of the Indian family-owned businesses have a succession plan in place, just 15 percent have one that is “robust and documented”. As many as 77 percent of Indian family businesses, though, have at least one conflict resolution mechanism in place.

In this context, our cover story this time on one of the best-known Indian health care companies, Apollo Hospitals, assumes particular significance. The group, now well into a high-growth phase, is in the midst of chalking out a detailed succession plan, with the active involvement of founder-chairman Dr Prathap C Reddy and the family council. One of the proposals, a most interesting one, is that of a rotating chairman, in which Dr Reddy’s four daughters, each of whom has been actively involved in the company, will take turns at the top job. If the proposal finally gets green-lighted by the company, it would be a test case for business families in India and one which undoubtedly would be keenly watched by shareholders. What seems to be working for Apollo, as Assistant Editor Shabana Hussain finds out in the story, is the deep bond between the four sisters and their shared goal for Apollo. Whether this translates into a smooth succession once Dr Reddy hangs up his boots will be worth keeping track of.

Tweets by @forbes_india
Are we entering an era of Neuromanagement?
After blast at Indo-Pak border, Taliban trains its guns on Modi