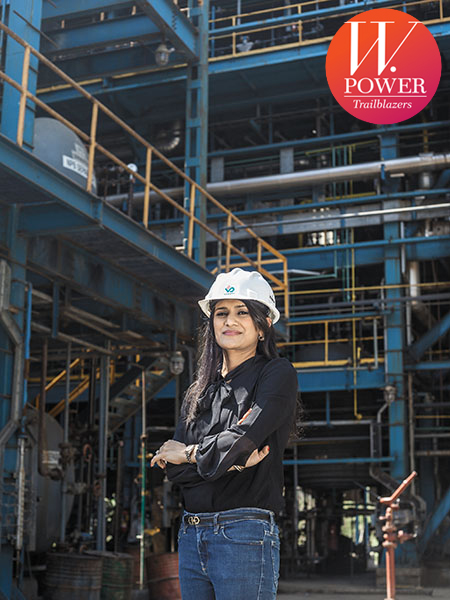 
In 2006, among the first tasks of Vinati Saraf Mutreja, 34, when she joined the company her father had named after her, was to get the quality of a key product right. Vinati Organics had been a maker of a vinyl polymer called ATBS (2-Acrylamido 2-Methylapropane Sulphonic Acid) that finds usage in industries like textiles and water treatment, but had been unable to get the quality right. The market was there for the taking as customers wanted reliable and dependable supply. If the company could get the quality right, it had a long growth runway ahead.

Saraf, who has a bachelor’s in finance from the Wharton School and applied science from the University of Pennsylvania, did get it right, with help from a consultant, and today Vinati Organics has a 55 percent share of the global market for ATBS. “The whole process of getting the product right also allowed me to gain acceptability within the company,” says Saraf, who was just 22 when she joined. Over the years she has time and again proved her mettle even as she acknowledges that she was “at the right place at the right time” and part of a business, specialty chemicals, that had huge tailwinds.

In the last five years, specialty chemicals have been a sweet spot for Indian manufacturing. Used in a variety of industries from adhesives to fragrances and lubricants to paints, these formulations add to the composition and influence the performance of the end product. Part of the reason for Indian companies doing well in this business has been the pullback from Chinese manufacturers due to pollution concerns. These typically long-term B2B contracts have resulted in several Indian specialty chemical manufacturers expanding product lines.

Vinati Organics, which had a ₹20 crore market cap when Saraf joined in 2006, is now worth ₹8,200 crore on the bourses—an annual gain of 58.8 percent. As the company has entered new product lines and expanded capacity, revenues have compounded at 22.1 percent to ₹743 crore in the same period while profits have risen by 38 percent a year to ₹144 crore. (In the first nine months of the current financial year, revenues are up by 38 percent to ₹1,029 crore and profits by 75 percent to ₹252 crore.) At an earnings multiple of 32 times, the stock is pricing in rapid future growth.

When Saraf looks back at the company’s performance, it falls in the realm of too good to be true. In 1990, her father Vinod Saraf, then 37, who had been working with Aditya Birla decided to start out on his own. The government of Maharashtra had invited applications for the setting up of an IBB (iso butylbenzene) plant and a loan from ICICI allowed Saraf to set up a factory in Mahad, Maharashtra. He used the next decade to reinvest dividends into the company and kept upping his stake in the business. He remains responsible for product ideation at the company.

For the first decade, the company stuck to IBB, which is used as a raw material in the manufacture of Ibuprofen, a painkiller. Steady demand and the shutting down of SI Chemicals has meant that there are now only two global suppliers. A turning point for Vinati was when the company cracked the US market in 2008. “We now have the scale, a fully depreciated plant and global capacity after the shutting down of suppliers in the US, UK and China have given us long-term visibility on demand,” says Saraf. The company has a 65 percent global market share of IBB.

In 2011, Vinati got into a third product isobutylene, a colourless flammable gas that is a raw material for ATBS and built a 70 percent share in the India market. ATBS has large capacity expansions planned, taking it up by 12,000 tonnes from the current 26,000 tonnes. Saraf who played an instrumental role in getting ATBS product quality right also moved the company to selling IBB through contracts rather than the spot market, resulting in better margins and gaining global market share. Her efforts saw her being rewarded with the managing director position in October 2018.

With Vinati growing quickly over the last decade, Saraf and her father have the enviable task of deciding what to do with their earnings. With their stake already at 74 percent, hiking it is not an option. The company could return cash to shareholders but apart from a buyback in 2018, Saraf has for now chosen to get into newer products that will give the company a 20 percent return on investment and a five-year payback. Saraf says the company is looking at 10-12 products that it could potentially manufacture.

An ace up Saraf’s sleeve is the introduction of para amino phenol which is in a trial phase (used in the manufacture of paracetamol) and four types of butylated phenol, and an expansion of the ATBS capacity.

These have the potential to double top line to ₹1,700-1,800 crore without the addition of any debt. A slip-up here could see the market de-rate the stock, but with Saraf’s past track record the market is for now willing to give her the benefit of doubt.