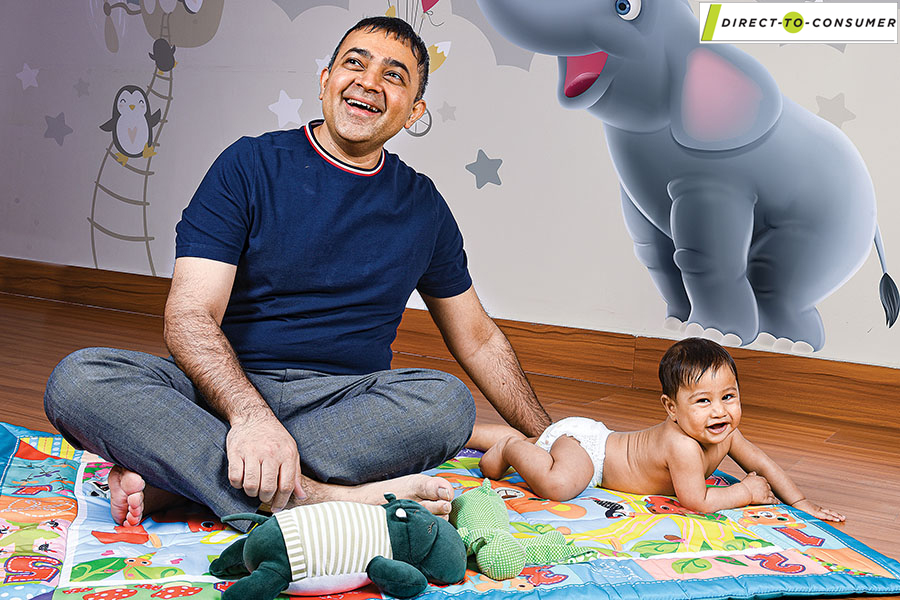 It looks like a fairy tale. Sahil Dharia, though, differs. “It’s a story told by a fairy,” laughs the founder and chief executive officer of Soothe Healthcare, the maker of feminine sanitary brand Paree. “Our consumers are our fairies, and they narrated a cute story.” Well, it was definitely not-so-cute for the mothers who struggled with infants and toddlers on two fronts. First, changing diapers was not a child’s play. “You can’t make them wear both, diaper and shorts,” was the unanimous feedback. Second, the diapers usually were voluminous and fluffy, causing discomfort. That also resulted in a typical behaviour across India. “You would find babies wearing a top and a diaper only,” says Dharia, who conducted an extensive consumer research in 2020. “Can you come up with a diaper that doubles as an attire?” was the question asked by irritated mothers. Dharia replied in two words: Why not?

Dharia was tempted to take baby steps. What prodded him to crawl was a question he asked himself. “Can the same sanitary pad infrastructure, and retail footprint and distribution channel built for Paree be used to make diapers?” The answer was ‘why not?’
In October 2020, amidst the raging first wave of the pandemic, he rolled out Super Cute’s, an ultra-thin diaper brand that comes with attached skirts and shorts. The first-generation entrepreneur hoped that Super Cute’s could piggyback on Paree, which had grown from Rs 3.84 crore in operating revenue in FY17 to Rs 40.2 crore in FY20. The expectation was modest.

Cut to April 2022. The baby stunned everybody by displaying its super power. Super Cute’s clocked Rs 50 crore in revenue in six months, crossed the Rs 100-crore mark in a year and is likely to close FY22 at Rs 132 crore. What this also means is that the baby has raced ahead of the mother. Paree, which ended FY21 at Rs 79 crore, is likely to clock Rs 118 crore in FY22. To put the crazy growth in perspective, here’s another way to dice the numbers. Paree took over six years to become a Rs 100-crore brand, while Super Cute’s took just 18 months.

It’s not only the speed which makes the story of Super Cute’s fascinating. It stumped Dharia by clocking 45 percent sales from online channels. Now contrast this with Paree, which gets 90 percent of its sales from its offline footprint. The magic of the pandemic baby can be explained by the pandemic itself. With the country under lockdown and shops downing shutters, the mothers went online. Super Cute’s became a direct-to-mother brand. “It’s a fabulous growth story, but honestly, we never expected this outcome,” confesses Dharia, claiming that the company sold 7.6 crore diapers in FY22. The target for the next fiscal is 14 crore.
The marketing and branding experts, though, are not surprised. “The market was ripe for disruption,” reckons Ashita Aggarwal, marketing professor at SP Jain Institute of Management and Research. The reasons were many. First, diaper penetration in India is still under 10 percent. Compare it with countries like China where it is over 50 percent. Diapers are still largely confined to tier 1 and 2 cities. “Imagine how big the market would be if it goes deep and wide across the country,” she says. Super Cute’s’ strong offline markets across Uttar Pradesh, Maharashtra, Bihar, Rajasthan, Punjab, Madhya Pradesh, West Bengal, Odisha and Uttarakhand attest to the fact that an aspirational Bharat is the right place for brands that can offer value-for-money as well as the features that they look for.
Second, a differentiated product always flies off the shelf. In a market dominated by Pampers and Huggies, MamyPoko came as challenger with its baby pant-style diapers. “It made incumbents follow suit,” she adds. The Japanese challenger brand, though, had its consumer challenge in terms of a brand name which was not easy to pronounce or remember. “You don’t need to make an effort to recall Super Cute even if you miss out the avoidable apostrophe,” she smiles. Rolling out products based on consumer insights, she adds, always has an edge over rivals in a market where everybody talks about absorption.
For the backers of Soothe Healthcare, the move to get into the baby diaper space was a logical extension. “It’s the same raw materials, same distribution channels and same buyers,” says Sunil Chandiramani, director at Symphony International Holdings. Though it’s not easy for a new kid to make a mark in the diaper category dominated by multinational biggies, the success of Paree made it slightly easy for Super Cute’s to run from day one. “With a superior product, it made big inroads,” he says. The challenge now, he points out, is to get the marketing act together. So far, the brand has had word-of-mouth growth and only leveraged the channels of Paree. “As Super Cute’s grows, marketing will play a key role,” he adds.

Dharia, for his part, contends that the brand did have its share of early challenges. If the founder wanted to use the same distribution channel to push Super Cute’s, the retailers were not game. The reason was money. Stocking an additional brand meant investing more money, and given the subdued sentiments due to the pandemic, it was not easy to convince the channel partners. “It doesn’t matter how good your product proposition is,” says Dharia. “Ultimately, the market has a ceiling.”

But for a brand with a digital-first approach, it’s easy to bend the traditional constraints. The liberty and ability to reach out to buyers directly is powering new-age direct-to- consumer brands to grow at an astonishing pace. Dharia now plans to morph Super Cute’s into a baby care brand by rolling out products such as shampoo, massage oil, lotion and powder. “Brand extensions will result in super brands,” he says. So can he have multiple Rs100-crore brands? “Why not?” he says. No kidding, the opportunity is massive. “Super Cute’s is still a child,” he signs off.

Tweets by @forbesindia
All that glitters: How the money-spinning IPL turned cricket into gold
Russia shells Ukraine's Odessa as US pledges fresh arms for Kyiv