2022 Luxury Special: Inside the lifestyles of the 10 percent

The current issue is an unabashed compendium of avenues for the rich and super-rich to splurge their ample dosh. Cruise along with us as we take you on a tour inside the world of private jets, yachts, exclusive art collections, and more 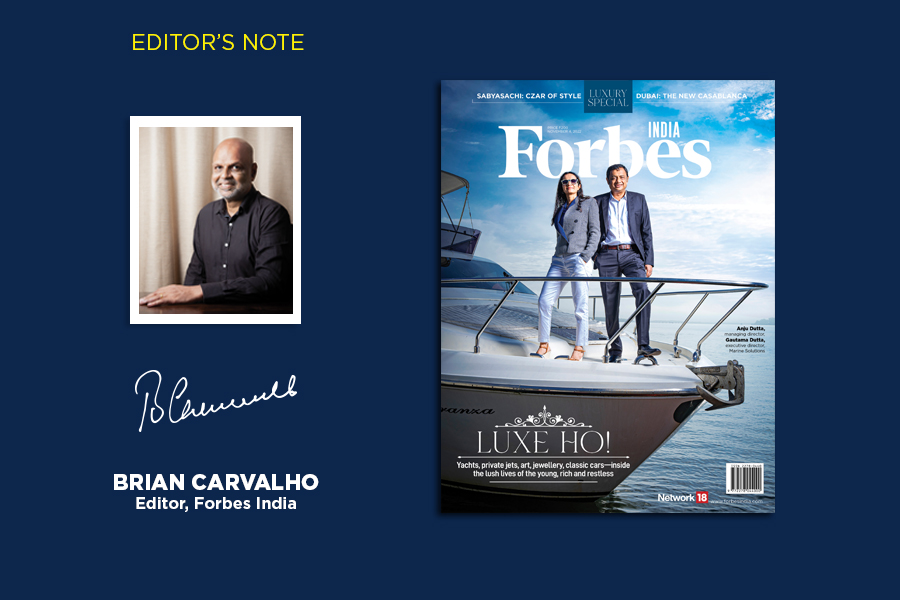 The country’s much-touted middle class is estimated to own just under 30 percent of the average wealth. This issue may also be for them—or at least for those aspiring to come close to the top 10 percent.

Now, wealth is one of the pillars of Forbes India—not just creating it but giving it back, but we will leave the latter for another day, and another edition (look out for Forbes India’s annual philanthropy special in the months to come). The current issue is an unabashed compendium of avenues for the rich and super-rich to splurge their ample dosh.

Before we get down to that, it may be appropriate to hoist a yellow flag, one that one of India’s self-confessed ultra-high-net-worth individuals (UHNWIs) raised recently. In an op-ed piece in The Times of India titled ‘A Job for the One Percent’, philanthropist Rohini Nilekani wrote: “Like it or not, floods, pandemics and air pollution put everyone in the same boat, even if some of us are in the upper deck private cabins.”

The backdrop the Bengaluru-based Nilekani writes against is the recent floods that exposed the city’s precarious infrastructure. Her short point is that UHNWIs have their share of high-quality infrastructure; the problem, though, is that this “thin slice” is built on a wobbly foundation of public infra. She gives the example of fancy malls, luxe cars, private jets and gated mansions to buttress her point.

The good news, she reckons, is that the rest of India does not seem to have a problem with the lavish lifestyles of the elite; not yet at least. In fact, the majority may be optimistic about their own upward mobility. Yet, keeping in mind, along with public interest, one’s “enlightened self-interest”, the onus may be on the super-rich to invest in helping build better cities. She goes on to give her prescription, which includes investing in think tanks that can help in improving governance and donating to civic institutions working on climate change, among several other measures.

The reason for bringing up this arguably moral responsibility of the super-rich is not to regress to a pre-liberalised India, when most industrialists were petrified about showing off their wealth in a country lost between socialism and free markets. Even as India’s wealth creators play a crucial role in rewarding all stakeholders, including citizens and society, there’s little reason for them not to relish the fruits of their innovations and brands they’ve built.

That’s the reason why once, every year, Forbes India puts aside the exploits and obligations of India Inc to focus on the exotic and exclusive pleasures their money can buy. Darielle Britto cruises with the high-fliers of Gen Z taking recourse to yachts and private jets to tour uncharted waters. As Britto notes, for many of these young and restive, the experience counts more than the possession of these extortionate assets.

Then, there is a slightly older generation that derives pleasure out of ownership, often (though not always) with an eagle eye on the potential for returns. Monica Bathija zeroes in on the top assets that hold out such potential: Art, jewellery, classic cars, watches, luxury handbags… these are what wealth managers term ‘passion investments’. Check out ‘Investments with Benefits’.

There’s a lot more in the lavishly designed pages ahead. As you flip through them, spare a thought for what’s holding all of this up—public infrastructure.

(This story appears in the 04 November, 2022 issue of Forbes India. To visit our Archives, click here.)