India will need at least 1.5 billion doses even if just half the population is vaccinated 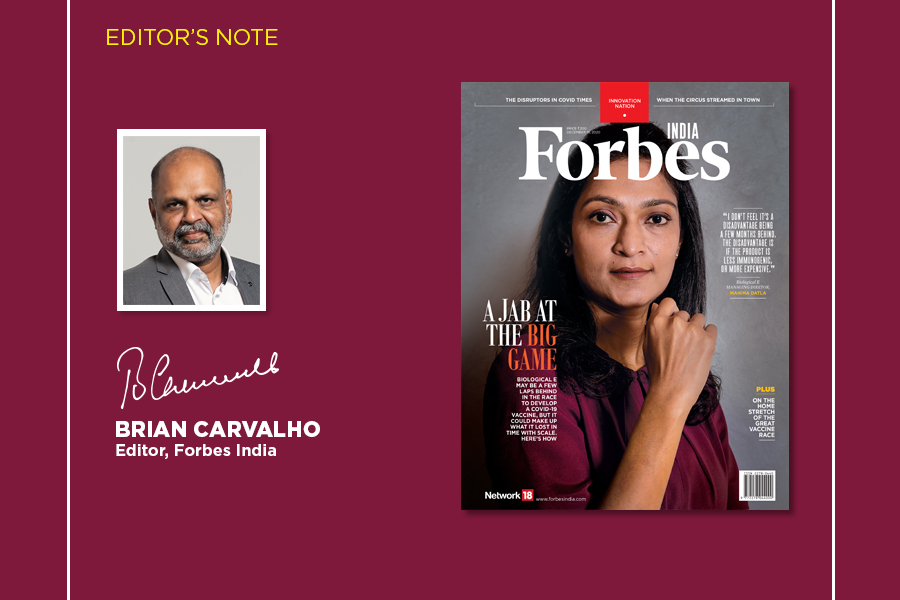 In the early days of the pandemic in India, a vaccine to deal with the Covid-19 virus was just a gleam in the eye of researchers at a handful of domestic pharma and biotech firms. Forbes India has been tracking this progress of science from the outset. In one of our first stories in May, we captured the efforts of the Hyderabad-headquartered Bharat Biotech with the Indian Council of Medical Research to develop a fully-indigenous vaccine for Covid-19.

The progress has been rapid, by pharma R&D standards. In the third week of November, Bharat Biotech announced that it had developed a vaccine that will be at least 60 percent effective. It had also begun phase 3 (human) trials on some 26,000 volunteers, the most critical phase in a drug’s journey to market. Bharat Biotech is hoping to ramp up capacity to 500 million doses by 2021, from 150 million currently.

A fortnight later, in early June, Forbes India delved into the plans of the world’s largest vaccine maker, and what many consider a frontrunner in the Great Vaccine Race. The Poonawallas’ Serum Institute of India had firmed up, among other global deals, one with the Cambridge-headquartered AstraZeneca to manufacture (globally) and distribute a vaccine developed by the Jenner Institute and Oxford Vaccine group.

Five months down the line, the Oxford vaccine showed an average 70 percent efficacy in phase 3 trials in the UK involving some 23,000 volunteers (caveat: Efficacy claims are via statements by vaccine developers and will be up for scrutiny in the days and months ahead).

By October, Forbes India ran a cover on the vaccine many reckon to be the wild card in the pack—Sputnik V from Russia, which had earned the unenviable tag of being the first Covid-19 vaccine to be registered in the world without going through phase 3 trials. In mid-September, Dr Reddy’s Laboratories had announced a tie-up with the Russian Direct Investment Fund (RDIF) to distribute 100 million doses in India after conducting phase 3 trials and getting the necessary go-aheads. In end-November, RDIF claimed efficacy rates of over 90 percent.

Such a raft of good tidings was reinforced by news from the US that efficacy of the vaccines being developed by Pfizer-BioNTech and biotech firm Moderna was over 90 percent. It’s against this backdrop that Manu Balachandran and Divya Shekhar, who have been tracking developments on the vaccine front since the early days of the pandemic, shine a light on the efforts of a relative dark horse, the low-profile Biological E (BE).

The Hyderabad-headquartered company, which has pentavalent vaccines and injectables in its portfolio, is working on four potential Covid-19 vaccines, three of which it is co-developing. In August, BE tied up with Johnson and Johnson to manufacture JNJ-78436735, which is at the phase 3 trials stage.

Yet, compared to its other Indian counterparts, BE is perhaps a lap or two behind in the Great Vaccine Race. But that may not matter in a country that will need at least 1.5 billion doses even if just half the population has to be vaccinated. The upshot? There may be room for all, and more. “I don’t feel there will be a disadvantage in terms of coming in a few months behind,” Mahima Datla, BE’s MD & CEO told Shekhar and Balachandran. “One has to aim to be the best.” This fortnight’s cover story is as much about BE’s progress on the vaccine front as it is about Datla’s journey at the company founded by her grandfathers.

Tweets by @forbesindia
Warner Bros. says all 2021 films will be streamed right away
Pinku Ranpura – Incredible Journey of an Indian Organic SEO Guru