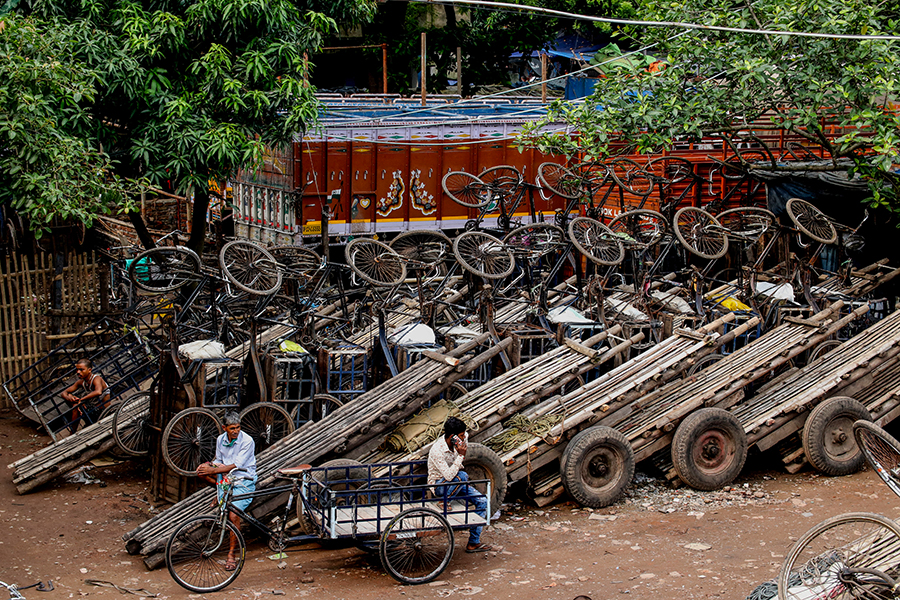 Photo by Debajyoti Chakraborty/NurPhoto via Getty Images India’s economy contracted by 7.5 percent in the three months to September, according to data released Friday, reflecting a sharp recovery from the previous quarter when growth shrunk by 23.9 percent. Though the pace of growth has been negative since the government imposed phase-wise lockdowns in FY21 due to the spread of the pandemic—and unlocking later—economists are confident that the revival of the economy is becoming entrenched, led by robust rural sector demand. But the impact of the pandemic and the availability of vaccines in coming months will become equally critical factors in determining global economic revival.   India’s GDP in the September-ended quarter was estimated at Rs 33.14 lakh crore, as against Rs 35.84 lakh crore in the same quarter last year, showing a contraction of 7.5 percent as compared to 4.4 percent growth in Q2 of last year.

The agriculture sector showed a 7.7 percent growth, manufacturing edged up 1.7 percent while mining, construction activity, hotels, transport and trade activity continued to degrow, but all showed a significantly improved pace of growth compared to the June-ended quarter when economic activity was virtually at a standstill. Construction, a dominant employer in the economy, contracted 8.6 percent in Q2 compared to 49 percent in Q1FY21. The Reserve Bank of India governor Shaktikanta Das at a public event this week said India’s economy is starting to exhibit stronger-than-expected pick-up in activity. He, however, warned that the country needs to “be watchful about the sustainability of demand after festivals and a possible reassessment of market expectations surrounding the vaccine”. The RBI had forecast India’s pace of growth to fall by 8.6 percent for the September-ended quarter. “While the economy has shrunk for two consecutive quarters, we do not expect this trend to sustain in [calendar year] Q4 20,” says Rahul Bajoria, chief India economist at Barclays. “A slew of high frequency indicators suggest that the economic recovery is becoming entrenched,” he added. Barclays has raised its FY22 GDP forecast to 8.5 percent from 7 percent earlier. Siddhartha Sanyal, chief India economist at private sector Bandhan Bank said that while the Q2GDP data was a “positive surprise”, it might be prudent to maintain caution regarding the pace of recovery in the coming months as one cannot rule out frontloading of activities and production during Q2 to an extent, especially closer to the festive season. Sanyal points to concerns of an uneven festive sales momentum, inventory position with dealers in various industries and packaging industry demand—all point to an uneven pace of recovery in coming months. “Given the uncertainties around investments and exports and limited government spending headroom, recovery prospects currently hinge critically on uptick in private consumption. However, barring a quick turnaround from its current unprecedented lows, the weak consumer confidence in urban areas act as a headwind at the moment,” Sanyal says. Crisil’s chief economist Dharmakirti Joshi also expressed a note of caution. “There are some signs of flattening of economic activity in the third quarter. Hence, that and further spread of Covid-19 will remain the key monitorables. The services sector will be more vulnerable in the second half, particularly contract-based services,” he said in a note. Some sectors such as financials, particularly banks and non-banking financial companies (NBFCs) could face a tougher Q3FY21 (October-December 2020) when the true extent of bad loans, particularly from the stressed small-businesses and retail sector will emerge. The speed at which economies across the globe ride out of the pandemic will depend on the completion of ongoing trials, availability and distribution of vaccines by various pharmaceutical companies across the globe. HDFC Bank’s chief India economist Abheek Barua has said that while the success of pharma giants in the last-stage trials of their vaccines could be the clichéd “gamechangers”, the journey from trials to mass vaccination is likely to be long.

Tweets by @forbes_india
Felicitating the legal luminaries
A mother, her son—and their 1,500-mile search for home