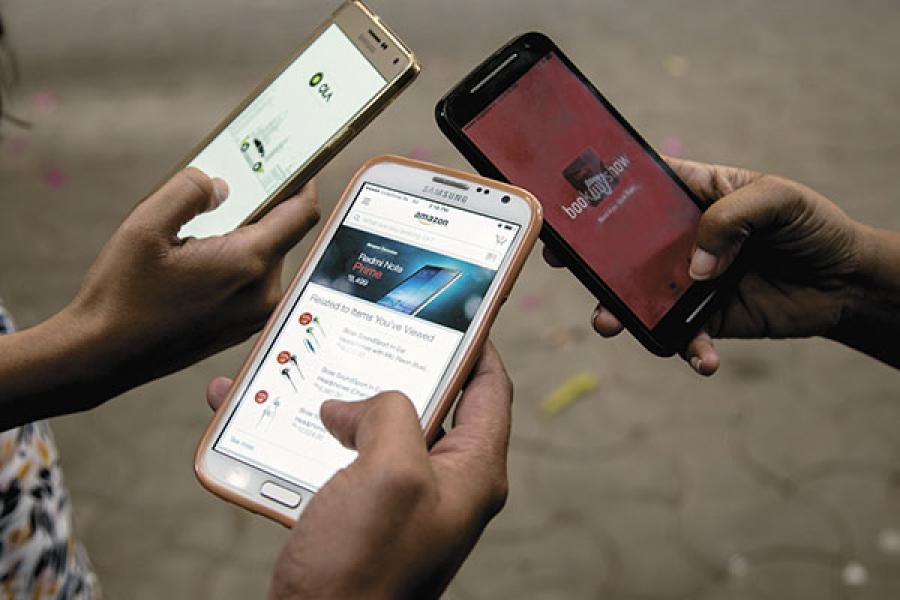 Image: Joshua Navalkar
Apps are having their golden moment as almost every brand, across categories and scale, is competing for space on our phone’s homescreen

When it comes to downloading an app on the home screen of his mobile phone, entrepreneur and angel investor Ravi Gururaj is very picky, and rightly so, in his opinion. “The phone’s home screen is the most valuable real estate on the planet on a per square millimetre basis. Look at all my apps, these are the big guns of the app space in India—Flipkart, Ola and BookMyShow,” says Gururaj, chairman, Nasscom Product Council.

His selection of apps depends on their functionality. “How many apps can I possibly interact with on a daily basis? I rarely go to the second screen of my phone. While apps on my third screen, I don’t need at all,” he says. In a segment where user loyalty is hard to find, the home screen of the mobile phone is a good reflection of apps that provide relevant value to the customer. “The space is highly sticky,” adds Gururaj.

On the other hand, Neetu Thomas, 24, isn’t gung-ho about apps, but acknowledges their uses. “I have the Ola app on my phone because I don’t own a car or a bike. So for me to travel, it is very important, especially during late nights,” says Thomas, a sales professional with a Bengaluru-based media company. “I have also downloaded the Flipkart app on my home screen because I have always been a Flipkart user. But then I realised that I’m one of those users not comfortable shopping on an app. This is why I don’t shop on Myntra anymore.” Her rationale: “I wasn’t pleased. It’s just not the same when shopping on a 4.7-inch screen. I use the Flipkart app to view products, but, to shop, I go to the website.”

With the new focus on all things mobile, apps are having their golden moment. Across categories, and regardless of scale, brands and businesses from hyperlocal delivery firms, cab services, beauty salons and grocery services to dating and matrimonial services, everyone wants to be on your mobile phone. But will the app-only strategy work in India? Or, is the platform more suited for services than product businesses? Online furniture store Urban Ladder, for instance, realises 35 percent of its business from its mobile app, and the rest through its desktop website. On the other hand, movies and events ticketing company BookMyShow gets 70 percent of its business through its mobile app.

Indian ecommerce is experimenting with newer strategies to engage and hold the attention of the increasingly fickle and demanding customer, and numbers support the relentless focus on mobile devices. (See box: Applying Numbers)

Little wonder then that in May, Myntra, India’s largest online fashion retailer, became the first Indian ecommerce player to opt for an app-only strategy, and discontinue its websites. But, in early December 2015, the company was rumoured to be returning to its mobile website. Multiple media reports indicated that the app-only bet didn’t play out well for the etailer, resulting in a loss in both sales and traffic.

“We made the transition in May this year recognising that it is the best way to provide fashion experience for consumers. Since then, for us it is business as usual and we have continued to see growth and acceptance of this strategy,” says Prasad Kompalli, head, ecommerce platform, Myntra. At present, the brand claims 7.6 million active monthly users on its app, which has been downloaded over 15 million times.

Myntra says there has been some “confusion” around a feature in its new app. “It is an add-on feature and not a mobile site,” Kompalli explains. “Earlier, if you shared a product page link within the Myntra app, customers couldn’t view the page immediately and would have to download the app to view it. But the new version of the app opens on a web browser. This means customers who do not have the Myntra app can also see our product links that are shared on their mobile phones. However, to purchase, customers will need to download the app,” he says. “Whether we do app-only or introduce a new feature, it will always be about offering the right customer experience and convenience.”

There are others, however, who believe Myntra decided to roll out the new feature to retrieve “lost” customers. Having a mobile web page that requires customers to still download the app seems to be like trying to sail in two boats at the same time, says Rajesh Gopal, director, digital engagement, Vertebrand, a Bengaluru-based brand value advisory and marketing consultancy.

Gopal points out that an app-only strategy has to be approached with some caution. “Despite increased smartphone penetration, it must be noted that stable mobile internet connectivity is still an issue in most parts of India. Also, web-based search is still quite popular, especially in those categories with high involvement purchases. The discovery process [for customers] is likely to be web-based,” he says. 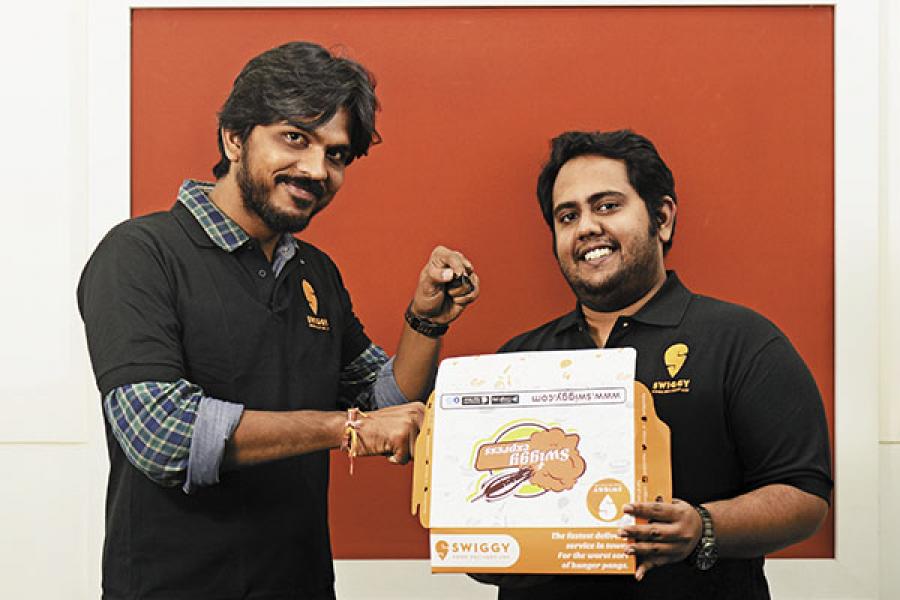 Flipkart and Snapdeal have taken cognisance of this. In November, Flipkart launched Flipkart Lite, a website for smartphones which claims to provide an app-like experience targeting consumers who are not comfortable installing apps due to concerns such as limited storage capacity on their mobile handsets. Flipkart gets about 80 percent of its business from mobile devices.

Not to be outdone, last month Snapdeal too launched Snap Lite, its website for smartphones that claims to load 85 percent faster than its regular website. For Snapdeal, over 70 percent of its business comes through mobile devices, using its app and website.

According to a report by mobile app intelligence platform App Annie, as of this September, Flipkart was ranked No. 1 in the list of top retail apps by downloads in India, while Amazon India was at No. 3, followed by Snapdeal (No. 4) and Myntra (No. 5). (Paytm is at No. 2 on the list.)

Neha Singh, co-founder of Tracxn, a startup research firm, feels that in the next two years proliferation of smartphones, coupled with 4G technology, will play a major role in enabling companies to embrace a “mobile-first strategy”, with a focus on apps. However, although apps will lead the movement, companies will still persist with mobile websites to reach wider audiences considering they can be accessed through different devices, says Singh. (Mobile websites can adjust themselves by compressing according to the size of a mobile device’s screen to give a better visual experience.)

And despite the buzz around an app-only strategy, many ecommerce companies prefer operating through a website and an app to reach a wider audience. “For us, a significant number of food orders come from offices and they use the website over the mobile app. In most corporate setups, there is no wi-fi access for the phone and people are directly connected to the desktop. We don’t want to be in a position where we don’t provide customers a choice. We want to keep all channels open,” says Nandan Reddy, co-founder, Swiggy, a Bengaluru-based online food ordering marketplace that is present in seven cities in India. Although 70 percent of Swiggy’s orders are placed through its app, Reddy is convinced that the combination of a desktop website and an app is the “right way” forward.

Experts point out that the app-only strategy has worked well for services-led businesses such as transport (taxi-hailing services Ola and Uber), personal finance (MoneyView, Chillr), news (Inshorts, Dailyhunt) and fitness (HealthifyMe, Orobind) because the use of such apps is high in metro cities. App adoption of etailers, however, has been slower.

“Some of the companies have figured out what to deliver on an app and what to offer on the web. In travel services, for instance, last minute bookings are much better delivered on the mobile while holiday packages are better sold through the desktop interface,” says Ritesh Banglani, partner, Helion Venture Partners. The medium has to be conducive to the services that are offered through it. 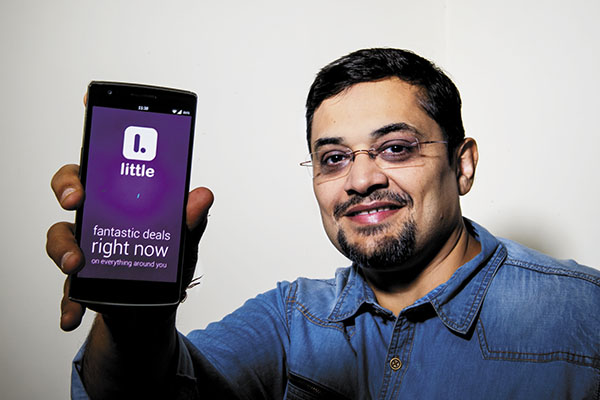 Image: Amit Verma
Manish Chopra, co-founder and CEO, Little, a deal-discovery app. He says the best way to provide information on deals is on mobile devices

HomeLane.com, which provides products for interior decoration such as furniture, kitchen set-ups, flooring, upholstery and lighting, realises that for a visual-heavy venture like them, a website becomes an important business and communication platform.

“Home interiors are an involved purchase. You don’t just add-to-cart and buy a product. Visualisation is key. Customers access our website either through a desktop or on the mobile website. From our business perspective, we cannot have an app-only strategy,” says Srinivasu Battula, chief technology officer of HomeLane.com, which plans to launch its app between January and March, 2016.

And although 60 percent of HomeLane.com’s traffic comes from mobile devices, customers still prefer to go to their showrooms in different cities or to their desktop site for making a purchase. “We have to provide consumers a choice. Let them take a call on how they would like to reach out to us,” says Battula.

For Bengaluru-based Little, an app-only marketplace for deals, customisation and a faster response from consumers is crucial. The app provides real-time hyperlocal deals to customers across services such as restaurants, movies, hotels, salons, gyms, spas and other services. “The unique differentiator in our business model is location. The smartest way to give that kind of highly relevant information in deals is through the mobile device. Moreover, an app offers a lot of ease and convenience during usage,” says Manish Chopra, co-founder and CEO, Little. The deal-discovery app has enrolled over 10,000 merchants offering 30,000 deals in 11 cities across the country.

While the endgame is unknown, everyone is looking for an opportunity. Perhaps more than just apps, innovations in the mobile space will become a key differentiator for businesses. A simple swipe on your mobile screen as you browse through the App Store or Play Store will determine the value a business unlocks.

Disclaimer: Network18, the publisher of Forbes India, is an investor in BookMyShow