Tarang Jain's company was doing great. But he had the foresight and the boldness to go ahead and fix what wasn't yet broken 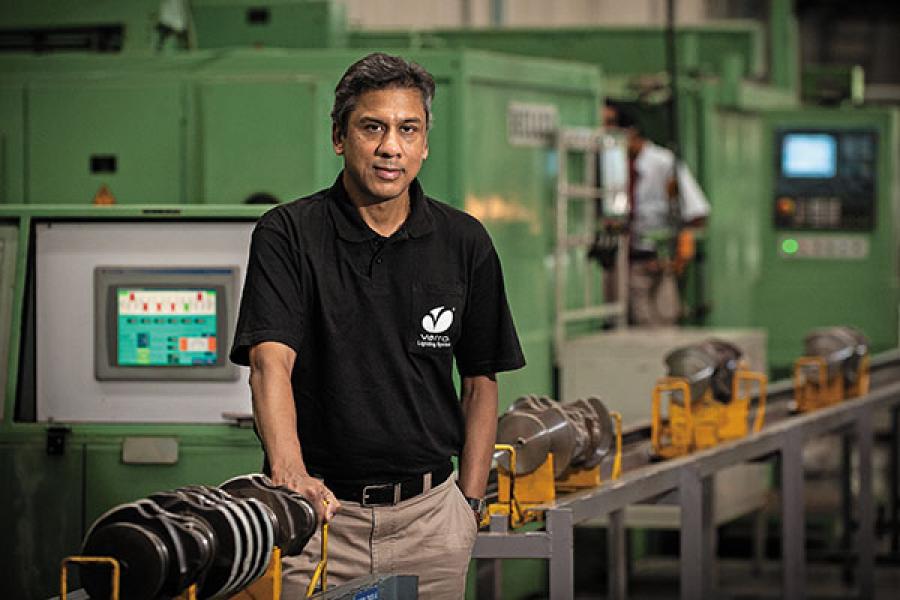 Award: Next Generation Entrepreneur
Tarang Jain
MD, Varroc Engineering
Age: 51
Interests outside of work: He has a collection of 400-500 lithographs; many are hung along the stairs leading to his office. He also reads widely; his last book: Conquering the Chaos by Ravi Venkatesan.
Why he won this award: For his foresight. He de-risked his business, not leaving it overly dependent on one customer, and ventured outside India at a time when companies were busy looking inside.


It was 2005 and business couldn’t have been better at Tarang Jain’s Aurangabad-based Varroc Group. Thanks to growth at its largest customer, Bajaj Auto, sales had grown rapidly in the last five years. The company was raking in Rs 800 crore a year, an eight-fold rise over the last five years. It was a heady time for the sector—a booming Indian auto industry meant that margins were in double digits. Varroc sold whatever it made and furiously expanded capacity.

Jain had come a long way since he set up Varroc in 1990. Back then he hadn’t hoped to grow so big. But when times are good, there’s always the fear that things won’t last forever. And so, while on a high, Jain began to look for answers.

“I saw super-normal growth and knew it just wasn’t sustainable,” he says at his office in Aurangabad’s Waluj industrial area. While Varroc had expanded, there were several chinks in its armour. First, the company was too dependent on one customer—Bajaj Auto. (Jain’s mother is Rahul Bajaj’s sister.) Second, it was making a lot of polymer-based products where margins are typically low. Orders are produced as per customer specifications and there is no premium for research and development. In short, it wasn’t Varroc’s proprietary technology. Last, the company had grown too rapidly, without adequate systems and processes in place.

Even as Jain made the most of the boom that lasted till mid-2008, he also began to set the company on course for the next phase of growth. To make his a mature auto components business, he would need proprietary technology, a diversified product and geographical mix. He decided to step outside his comfort zone and look for acquisitions that would help Varroc on this journey.

In 2005, he bought Imes, a small Milan-based company, which gave him a toehold in Europe. In December 2011, he bought Triom in the two-wheeler lighting space. But Jain’s big break came in June 2012 when he paid $95 million (Rs 450 crore then) for Visteon’s lighting business. A subsidiary of Ford Motor Co, it had manufacturing facilities in low-cost countries like Mexico and the Czech Republic and would give Varroc better margins. It also gave Varroc access to a global list of customers. More importantly, it afforded Varroc with the means to make proprietary products—the key to its next growth phase.

Jain seems to have played it well. The initial results are for all to see. Varroc will end this fiscal year with Rs 7,000 crore in revenue.

What really sets Varroc apart from others—and here he is in a small league of component-makers with global ambitions, like Minda, Sona Koyo and Motherson Sumi—is that Jain had begun to think global when others were thinking local. So when the Indian market slowed down, he was ready to take the next step and go global. It is something others in the industry are just waking up to as sales in the Indian market slow down.

The Early Years
It was 1985 and Tarang Jain had graduated from Mumbai’s Sydenham College. Jain and his twin brother Anurang were evaluating career opportunities. Father Naresh Chandra Jain had run a Bajaj group company, Kaycee Industries. The family now wanted to get into business for itself, but was not keen on buying Kaycee. One idea was supplying to Bajaj Auto; surely their link to the Bajaj family would help. And suddenly the auto component business was a viable alternative. Sure, they had no experience running a business, but the duo decided to make a go for it. Their first company, Endurance, was into dye casting.

While Jain says he would have liked to set up shop in Pune, where Bajaj is located, the best they could manage was a licence for Aurangabad. Undeterred, the brothers moved base. In hindsight, it was the right move. Jain says: “I know of businesses that were a lot larger when we moved here, but because the promoters were based in Mumbai they are nowhere to be seen now.”

Five years later, in 1990, Jain, who had by then completed a Master’s degree in business management from IMD in Switzerland, set up Varroc. It was a futuristic business. In those days, Maruti Suzuki had made extensive use of plastics and other manufacturers were catching up. Bajaj Auto wanted dashboards made of plastic. Soon, mirrors had plastic moulds and the list grew to seat parts and air filters.

But growth was slow and by the end of the decade, the company had grown to a modest Rs 100 crore. This was when Jain began to diversify his customer base. By the end of the 1990s, Varroc was supplying to TVS, Ducati and Piaggio. (Today, 60 percent of the domestic business still comes from Bajaj Auto.) Still, this was a low-margin business and while Varroc had taken some baby steps in research and development, it had no technology to call its own.

According to Damodaran, the group in 2005 started work on new areas it had to get into. Its key aims were to reduce reliance on one customer and broaden its range of products.

But this was also the time when the world, flush with liquidity, had pushed up asset values and companies were not cheap. After a lot of scouring around Europe, Jain zeroed in on Imes, which made parts for earth moving equipment. It allowed them to see how business was done globally and had margins of 18-20 percent, among the highest in the industry.

Jain says the first surprise was the amount Imes spent on R&D. At 5 percent of revenues, it was much more than the 1 percent Indian firms spend. “I am an equal offender here,” he says. Then there were the systems and processes in place. At Varroc, even today the functioning of a plant depends largely on the individual plant manager.

While Jain digested the Imes acquisition, he got busy with the Indian market. Two-wheeler sales were booming and by 2008 the Varroc Group was a Rs 800 crore company. (In the early 2000s, he had amicably parted ways with brother Anurang, who runs Endurance.) However, disaster struck with the Lehman Brothers bankruptcy and sales crashed for six months.

But there was a silver lining: Venturing out of India was going to be easier, thanks to reasonable valuations. His next deal was Triom in 2011, followed by the Visteon deal —Varroc’s big break—in early 2012.

The Next Steps
Triom gave Varroc access to a bench of 400 engineers that the company can use to make proprietary products. It has access to best practices in manufacturing and plans to use that to improve its quality control systems. Varroc also plans to get into Russia and Brazil, two large auto geographies that the company is not present in. “Visteon gives us the product range and global heft to enter these countries,” says Jain.

Back home, Jain has successfully moved beyond Bajaj Auto. The company recently signed up Honda Scooters and Motorcycles as a customer, a big win for the company, says Damodaran. Jain is also looking for a private equity player to help with the debt he took on for the Visteon buy. On the cards is a listing by 2017 and Rs 20,000 crore in revenue by 2020. If he gets there, Varroc is likely to be among a handful of auto component companies with a billion dollar market cap. And that’s no mean achievement for someone who took a train out of the “City of Dreams” some 28 years ago.

Tweets by @forbesindia
The Makings of a Leader: Excerpt from 'Gandhi Before India'
Walmart Heir Alice Walton Is America's Richest Art Collector