Has the X3's facelift taken its game ahead?

With its re-profiled tail-lamps and a massive touchscreen, the X3, always good at basics, is now exceptional at a few things too 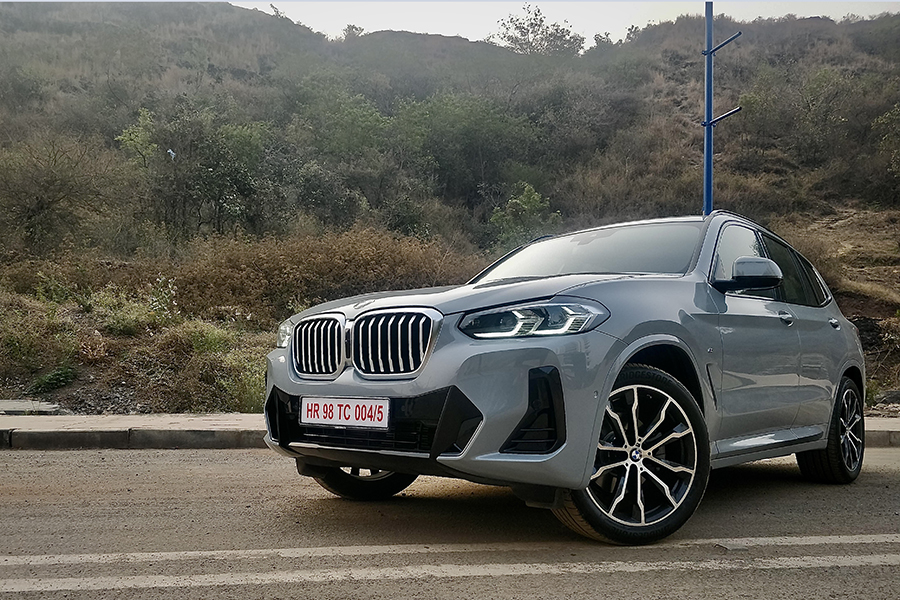 As far as mid-life facelifts go, the new BMW X3 has done a fair bit more than what its rivals have, all the while keeping the X3’s key focus very much intact. Unlike the facelifts to the Audi Q5 and the Volvo XC60, a cursory glance is all it takes to realise that BMW’s well and truly given it a big shot in the arm.

A solid giveaway is the upsized grille which, while definitely not as comically-sized as on some of the other BMWs, gives it prominence over pretty much everything else on the fascia. In terms of functionality, though, it does serve a major purpose, as BMW has incorporated a system it calls ‘Active Air Stream’. How it works is there’s a kind of curtain inside the grille, which opens and shuts depending on the engine temperature. This helps with the air flow and reduces drag, too.

The adaptive LED headlamps, too, are striking in their appearance, and the bumpers have gotten a full revision now on the full-fat M-Sport spec you see here. The 20-inch wheels you see in the pictures are optional as part of the M-Sport package, and they look the part, but you can’t help but feel that a taller sidewall would have gone a long way in improving the dynamics of the car. More on that later, though. Standard fitment for the facelift X3, though, are 19-inch wheels.

Perhaps the biggest talking point of the new X3 is the re-profiled tail-lamps that, in my opinion, give the car tremendous character. This, however, I found out, is not a universal appeal generator. A lot of people seemed to be split about the way the car looks from behind, with some completely writing its looks off. Polarising opinions are a great way to get people talking, I suppose. 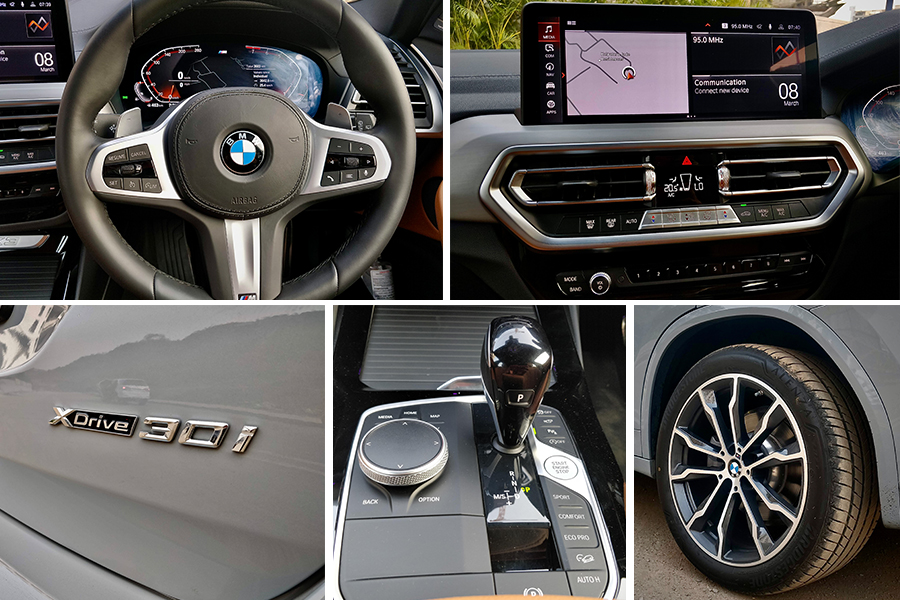 On the inside, the X3 continues with its theme of subtle-yet-noticeable changes. What you can’t miss is the massive 12.3-inch touchscreen sitting in the centre of the dashboard. As far as functionality goes, it’s hard to fault. It’s got a crisp screen, a user-friendly interface, and fantastic touch response. There are even gesture controls for your multimedia, and one slick 360-degree parking camera that comes in handy when you’re trying to squeeze into tight spots. And, thankfully, the X3 comes with wireless Android Auto and Apple CarPlay, which is a blessing nowadays in terms of connectivity.

As far as comfort goes, the X3’s seats are about as good as they get. There’s plenty of bolstering on the sides, and the materials used ensure that you’ll be able to get to your destination in the most relaxed manner possible, even if you’re thinking of going long distances. What I couldn’t wrap my head around was the fact that BMW hasn’t included heated/ventilated seats, let alone a massage function. Seeing as how many cars even two or three segments lower are getting it nowadays, it should have been included in the X3, even if as just an optional extra.

There’s not much to complain about at the rear, though. There’s enough legroom and headroom for most people and at a pinch you could squeeze in three abreast, but the X3 is intended as a four-seater. 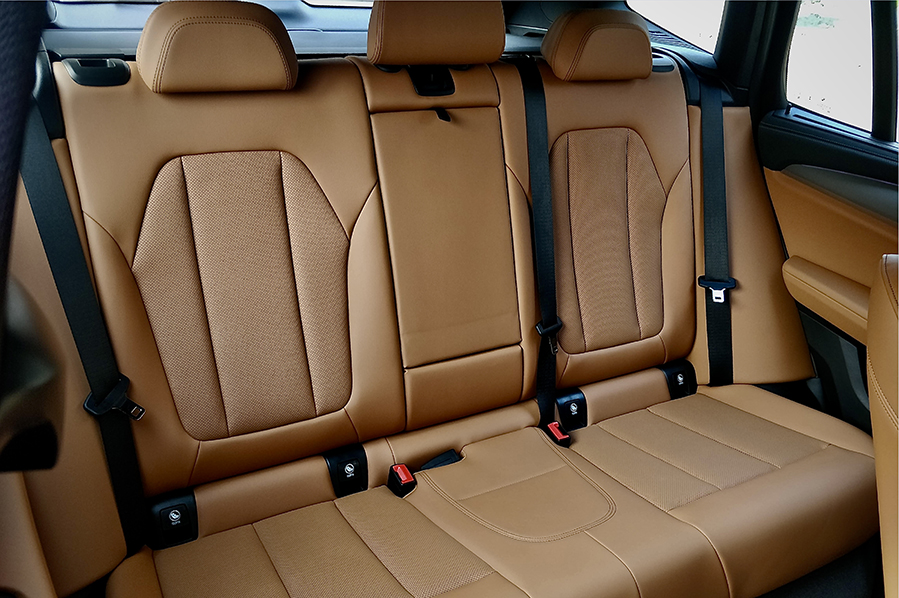 Boot space? It’s not too bad at 550 litres, but if you ever need the extra luggage-hauling capacity, you could always fold the rear seats down to liberate a lot more space.

As for what drives the X3, you can currently only get it in the xDrive30i guise. Translated, that’s BMW-speak for a 2.0-litre turbo-petrol engine that makes 252hp and comes with an 8-speed automatic gearbox as standard. The ‘xDrive’ bit stands for the fact that all four wheels are driven, which makes this quite a fun, grippy car to drive. If it’s the sort of thing you’re looking for, 0-100kmph comes in in just under 7 seconds, which is pretty quick for a car like this. This is, of course, unchanged over what you used to get from the previous X3.

Considering that, it’s no surprise how it drives. The 2.0-litre engine is a strong unit that doles out enough punch when required, especially in Sport mode. But if you’re in the mood to dial it back and cruise along a highway, selecting Comfort and letting the car amble at a comfortable 100kmph is something that the X3 is more than up for. 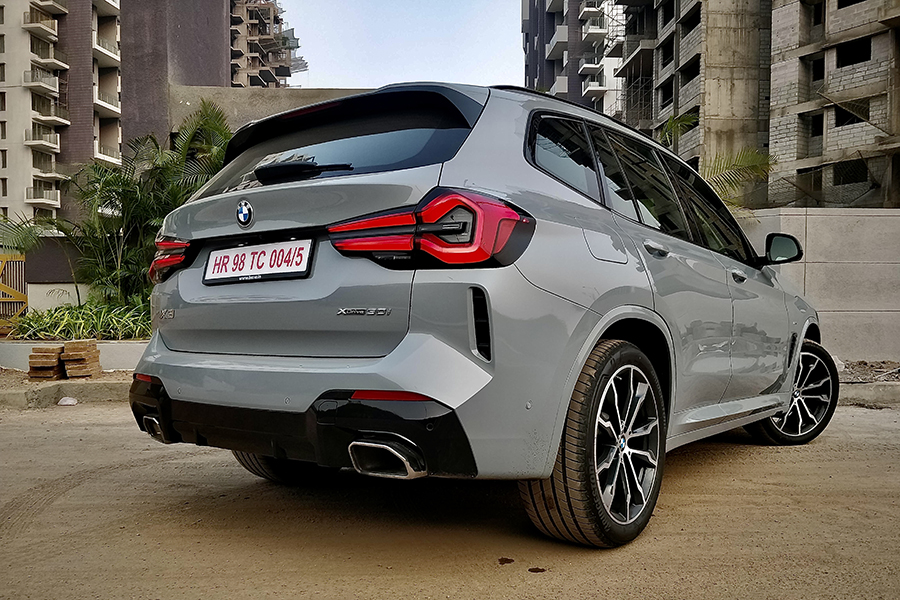 The steering and gearbox definitely feel like they’re capable of more than just ambling, though. There’s a nice heft to the steering that goads you into pushing the car hard around corners, while the gearbox is plenty quick and seamless with its shifts. The only time you’re ever caught out by the X3’s mannerisms is when you encounter a sharp bump or pothole that makes it crash rather hard. The blame for this can rest solely on the 20-inch optional wheels that this M-Sport spec comes with. The 19-inch tyres with taller sidewalls will do the trick just fine and make the ride a lot more comfortable when navigating broken tarmac.

Keep in mind, this is despite the X3 getting adaptive dampers that allow the suspension to be altered depending on the drive mode selected. All that said, if what you’re presented with is a smooth ribbon of tarmac, the combination of the great engine and gearbox, the laudable grip levels thanks to the all-wheel drive system and the impeccable steering will make you forget that you’re sitting in an SUV.

The typical buyer, then, of the new X3 will probably be the sorts to prefer sitting behind the wheel than in the second row of seats. If that’s the sort of thing you’re after, there’s no better purchase out there for this kind of money. Then again, even if it’s not, the X3 does manage to strike a lovely balance between comfort and sporty (just be sure to spec it with 19-inch wheels). All in, this makes for a substantial update to a car that was always good at the basics, and now is exceptional at a few things, too.