Time to let sedans back into our lives. The Skoda Slavia is a great place to start

It's good looking, filled with thoughtful features, and drives and rides rather well 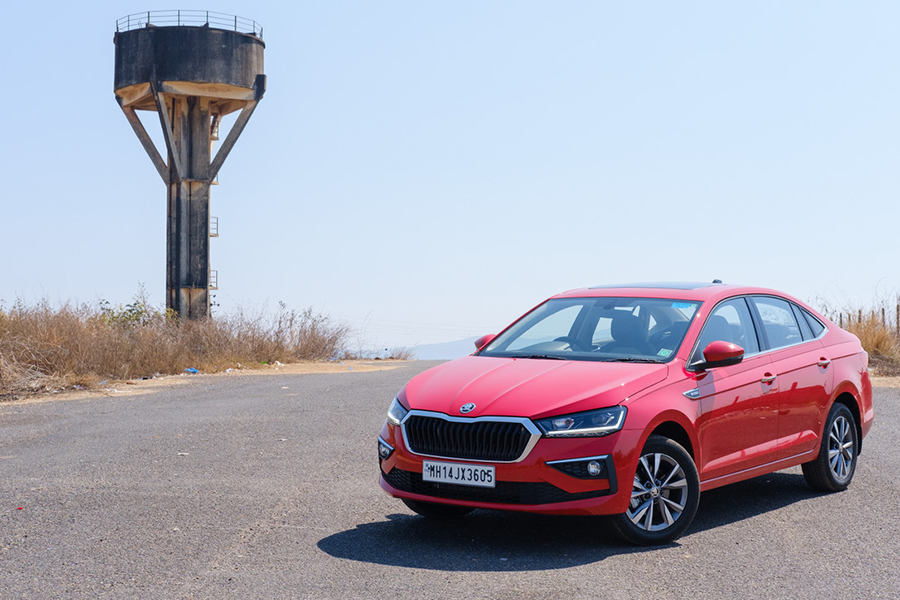 The Slavia has a purposeful stance and looks quite impressive in the flesh.

What’s the big deal with Skoda Slavia? In a market dominated by SUVs, Skoda comes up with a fresh-faced sedan, and that’s a bold move. Yes, it is also true it already played its SUV card by introducing the Kushaq, a car that’s doing wonders for the brand in India, but it still thinks the days of the humble sedan aren’t over, and after a quick drive in the new Slavia, I can report that they’re definitely not.

So, what’s new here? Skoda’s good at making sedans, always have been, and the Slavia is just more of that. Pictures don’t do it enough justice as the car pops out a lot more in the flesh. A typical Skoda grille takes centrestage on the handsome front of the car, and there’s plenty of other interesting design cues all along the body. The personal highlight of the car is the way the rear shapes up. It gives the impression of a much bigger can than it actually is and the tail-lights add a distinctive look.

The alloys look really nice in the flesh, but every time I looked at it, I couldn’t help think about how the car would look with a tiny bump in wheel size (from 16-inches to 17-inches) and with a lowered profile on the tyres (from the current 55 to maybe a 50?). It would help in reducing the slightly large gap between the top of the wheels and the wheel arch.

These, however, are hypotheticals. Getting back to facts—the Slavia’s ground clearance of 179mm makes it an easy car to drive on broken tarmac and large speed bumps. Indeed, that figure is approaching SUV levels of ride height, but I can’t help but think of how it would look even better if it was dropped by around 10mm. 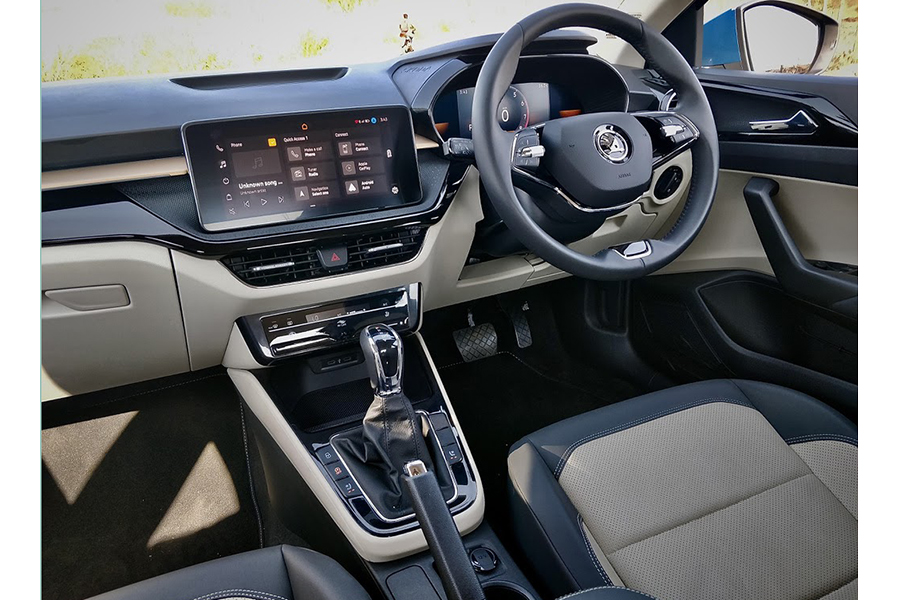 The Slavia's cabin is typically Skoda. No bad thing at all, that.

The cabin is tastefully minimalist. It’s well built, for sure, but it stops short of leaving you thinking you’re in a car from a segment above. If you’ve sat in a Kushaq recently, this would seem like a familiar place. The two-spoke steering looks good and feels nice to the touch, whereas the virtual cockpit (an all-digital instrument readout) makes for a great companion on the move. What’s neat is that Skoda’s tried to do away with a lot of physical buttons, especially the controls for the air conditioner. This could have gone either way, but it’s worthwhile noting that it’s been done in a way that’s not fiddly.

In the centre of the dash is a sizeable 10.1-inch touchscreen (7-inch in lower variants) that’s quite nice to use. The UI is fluid, fuss-free and intuitive. It even gets inbuilt apps like Sygic maps, audiobooks, Gaana and Booking.com, along with the BBC World Service news app, which is essentially live radio. Aside from that, there’s also Apple CarPlay and Android Auto connectivity, along with wireless charging, so it’s well and truly compatible with your smartphones, which is always a plus point.

Skoda’s also added a tonne of great connectivity features via the MySkodaConnect app, which gives you things like geo and time fencing and plenty of stats on your car. Curiously, though, for an app like this, there’s no way to remotely lock/unlock the car, or start your engine remotely to pre-cool the cabin. As for the rest of the features included, the Slavia comes pretty well-stocked. There’s cooled seats, a sunroof, rear AC vents, auto climate control, and an 8-speaker sound system with a boot-mounted subwoofer, to
name a few. Safety, a critical aspect for Skoda, hasn’t been skimped on, either. The Slavia gets six airbags, ESC, an electronic differential system, hill hold control, multi-collision brake and ISOFIX child seats as standard. 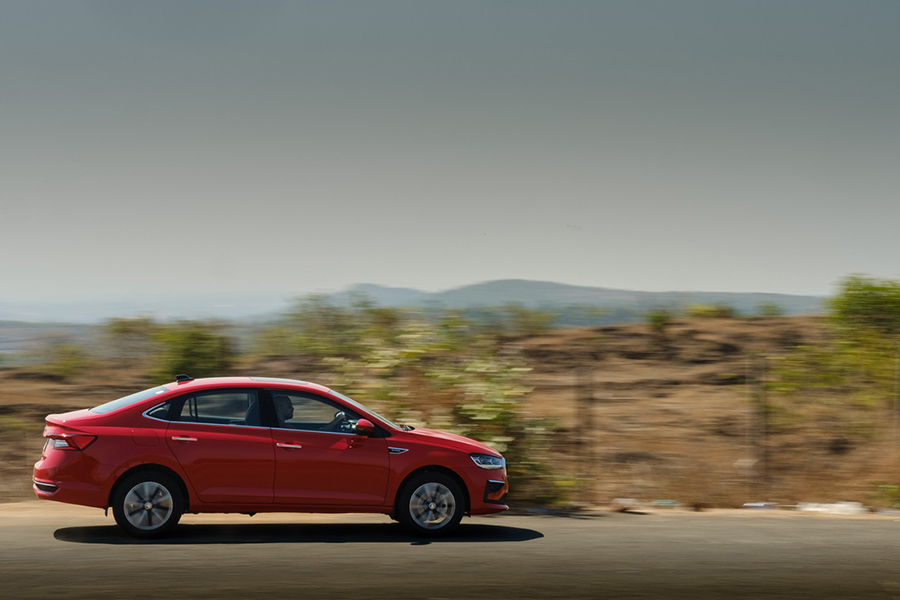 One of the outstanding bits of the Slavia is its ride quality.

Rear seat comfort, then? That’s there in spades. There’s ample headroom, legroom and a decent amount of thigh support to make even longer journeys a peach to handle with four passengers. Five would be a bit of a stretch, but it can be done. But even if you do,
you’ll be happy to note there’s more than enough boot space for all your luggage at 521 litres. With the second row down, that shoots up to 1,050 litres.

I wasn’t expecting the Slavia to be a particularly good car to drive, and that’s not so much to do with the way Skodas are made as much as it has to do with the fact that getting a thumping good sedan to drive seems like a product of another age, especially in this segment. But Skoda’s responsible for immensely satisfying cars like the Octavia vRS, and I should have seen it coming when its senior representatives compared the Slavia to the first-gen Octavia vRS.

The one in question here, the 1.0-litre, 3-cylinder TSI with 110hp and a 6-speed manual was the surprise of the day for me. Try as you might, you won’t be able to tell that it’s been fitted with such a small capacity engine. There’s more than enough power to handle most driving roads, and very little of that gruff quality you’d associate with a 3-cylinder car. The six-speed manual (there’s also a 6-speed torque converter available for the 1.0-litre variant) is a work of art with its smooth, precise shifts and progressive, light clutch. 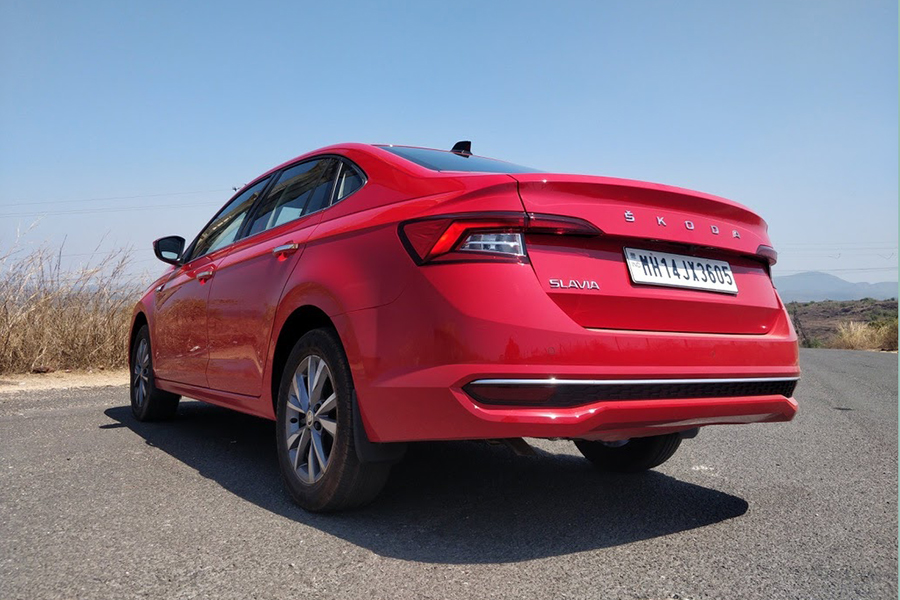 The tail-lamps are one of the most striking features of the Slavia's design.

They combine to give you a lovely driving experience. It was particularly enjoyable pushing it all the way to its 6600 rpm redline and seeing just how smooth the engine feels even at that end of the rev band.

As for the way it handles corners, well, it’s still a front-wheel drive platform, so there’s a bit of understeer when it’s pushed hard, but that’s well beyond what most would normally do with the Slavia, so it’s of no concern whatsoever. Even the body roll is well contained, and you always feel like the Slavia is planted to the road, especially at higher speeds.

The true trump card, however, is the incredible ride quality. At slow speeds, it will smother any bumps you throw its way, and the high-speed ride is poised and perfect, the long-travel
suspension and the beautiful body control giving you all the confidence in the world.

Overall, the Slavia comes across as an extremely well-thought-out car. It’s good looking, filled with thoughtful features, drives and rides rather well, and is more than up to the task of ferrying four. Skoda’s aim to bring back the desirability quotient for sedans
has been kickstarted really well.