With radical changes, the Audi Q7 is back, and it's hard to miss

There's plenty of cushioning, lots of leg-room and head-room, and the panoramic sunroof give passengers a nice and airy feeling. Anyone looking for a comfortable, luxurious SUV won't be disappointed 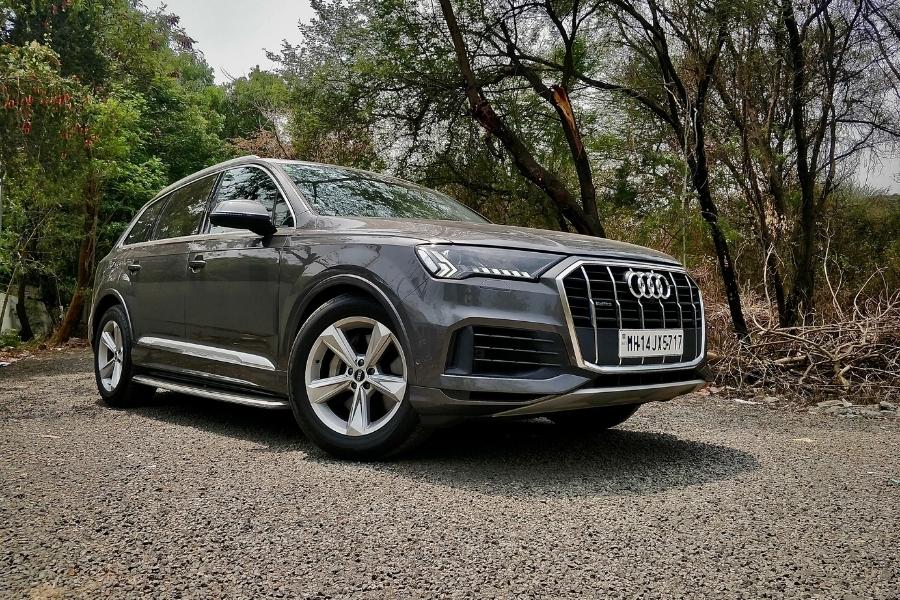 The Audi Q7 is now much improved in a lot of areas where it matters over the previous iteration.

The fact that Audi’s big, hulking Q7 hasn’t been in the market for nearly two years came as a bit of a shock to me. Sure, I knew of its absence, but has it really been that long? And given that, has Audi made some seriously radical changes to the Q7 to keep it fresh or is it more in the line of incremental changes?

As it turns out, it’s the former. Look at it from any angle, and there are changes aplenty to the Q7. The grille, as an instance, is a lot more imposing and in-your-face, and it’s a good reason why it has a lot of presence on the road. The headlamp design hasn’t been spared either, as they’re now larger and sharper than before. A personal highlight in this regard is the slick light show that’s on display when you lock or unlock the car. Gimmicky, sure, but it adds to the flash that it’s aiming for.

That said, I do wish that Audi had specced the Q7 with an alloy wheel design that’s a bit more appealing. The 19-inch wheels are a touch too conservative. Just a matter of choosing a better-looking spec before you buy your car, though.

Other than that, the rear’s been styled quite well. There are slimmer, full LED tail-lamps that adorn the flatter tailgate and give it quite a nice stance overall. 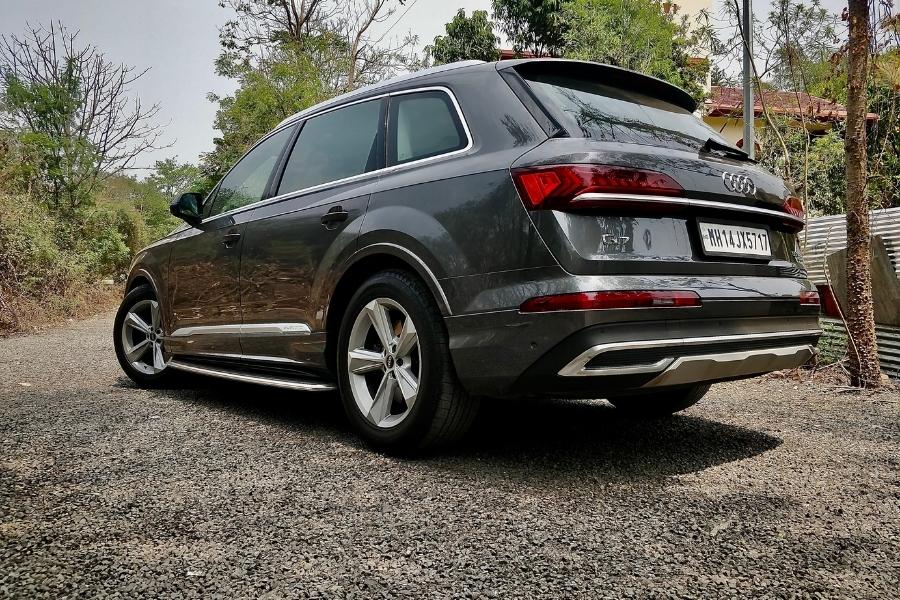 On the inside, there’s very little that will link you back to memories of the old Q7. At the centre of the enormous dashboard are two touchscreens—the larger 10.1-inch screen on top handling various car functions, and the lower 8.6-inch screen dedicated to the climate control system. This is, of course, more in line with newer Audis, but it has to be said that the lower touchscreen does make you lose focus on the road momentarily, because there’s absolutely no way you can adjust temperature settings without having to look down specifically at the touch controls. This may be irrelevant if you have a co-passenger to help you adjust the settings, but it bears mentioning nonetheless. 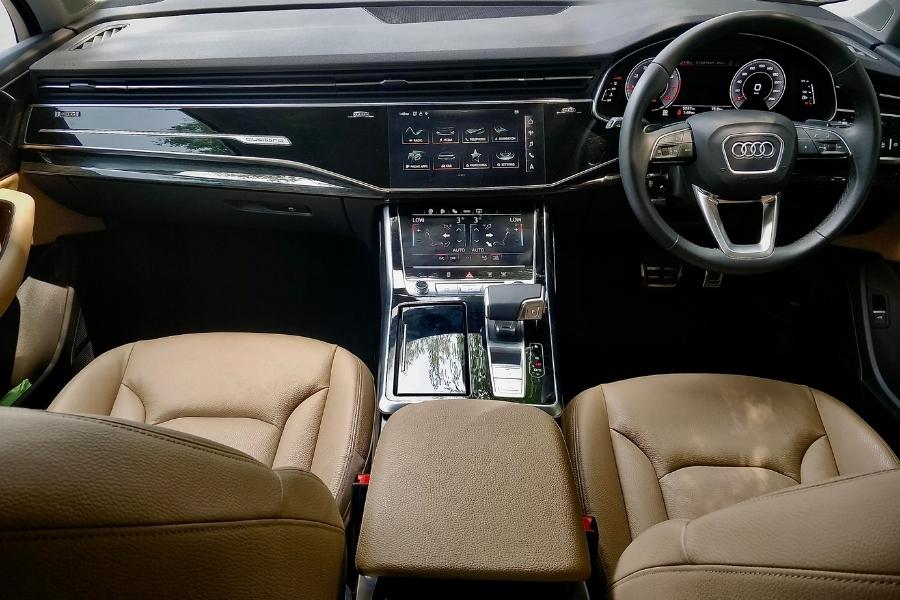 The Q7 isn’t done with its screens yet, though. The third screen, an all-digital one, is right in front of the steering wheel. The ‘Virtual Cockpit’, as Audi calls it, is one of the best interpretations of an all-digital instrument cluster currently. Crisp graphics, just the right amount of information, and very easy on the eyes. There’s even a layout you can toggle that will show you nothing but the map as the entire screen!

Aside from that, there are more good things to say about the Q7’s cabin. The seats are tremendously comfortable, especially the second row. Plenty of cushioning, lots of leg- and head-room, and the large windows and panoramic sunroof give passengers a nice and airy feeling, which is never a bad thing. 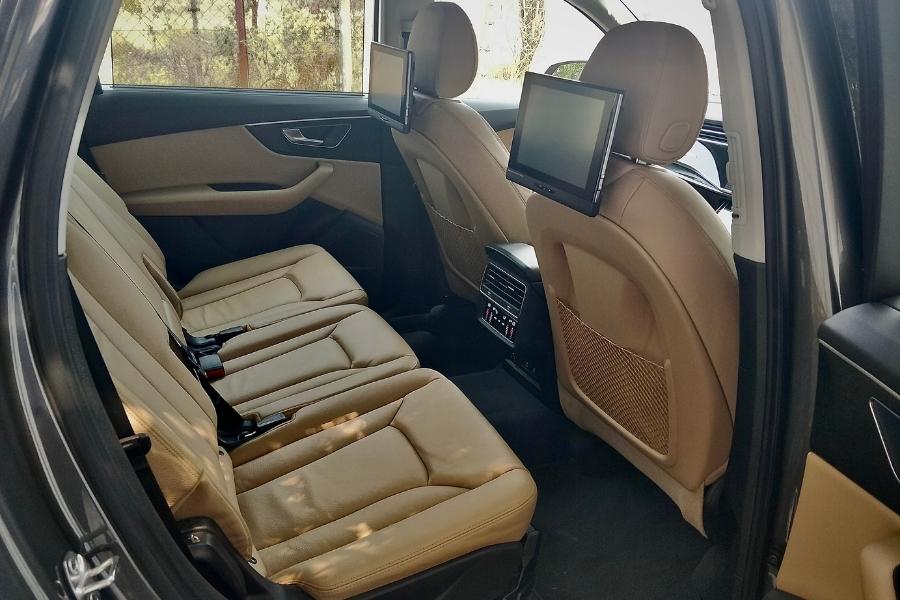 There’s also the matter of the third row of seats to consider. However, if you were hoping for a remarkable turn of events wherein it’s suddenly a surprisingly spacious place to sit, well, you’re out of luck. The Q7’s third row is, at best, suitable for pets or children, and that too for a very limited amount of time. You’d be much better off folding the seats flat and using the extra cargo space that’s liberated. In case you were wondering, with the third row down, you get a sizeable 865 litres of boot space, and if you really need to haul a lot of luggage, then you could even fold the second row down, leaving you with a slightly absurd 2,050 litres.

As far as features go, the Q7 comes plenty equipped. You can spec the car in two trims: Premium Plus and Technology, the latter being the higher spec. With it, you get Matrix LED headlamps, an air fragrance package, a lovely 19-speaker B&O sound system, 3D parking cameras, and even an auto park feature that steers the vehicle into a spot. What’s cool is that it handles the accelerator and brake inputs, too. 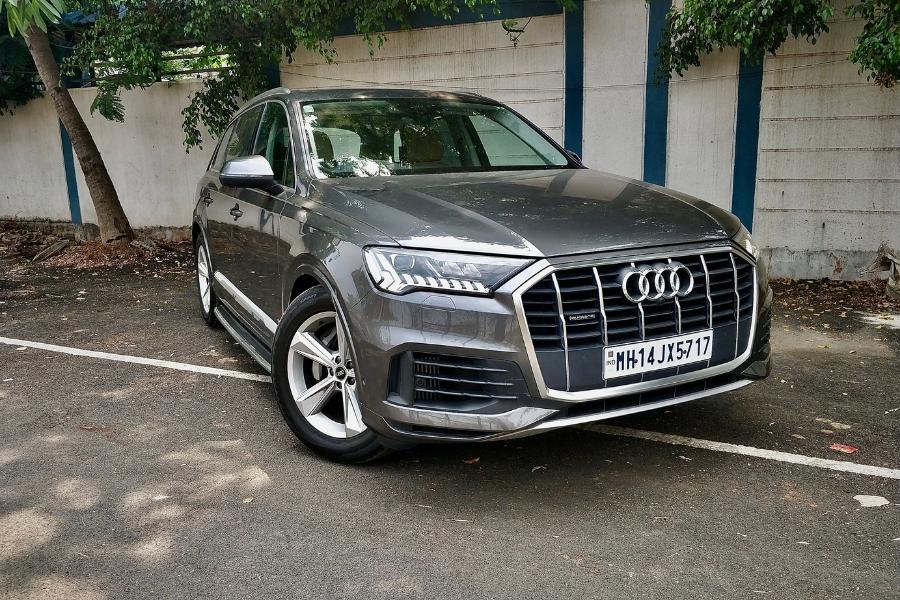 But were you to skip that and opt for the Premium Plus package, you get a panoramic sunroof as standard, adaptive air suspension, four-tone climate control, adjustable ambient lighting, virtual cockpit digital dials, and dual touchscreens with Android Auto and Apple CarPlay.

The Q7’s big list of changes includes a big change to the engine, too. Gone is the smooth diesel, and in comes a 3.0-litre turbo-petrol V6 that makes 340 hp and 500 Nm. And that’s the only engine you can get the Q7 in now.

And after spending a bit of time with it, I can vouch for the fact that that is no bad thing at all. As a big, burly SUV that needs to chauffeur its occupants in utter silence and refinement, the Q7 scores big. The Q7 is in its element when speeds are sedate and the road conditions are a bit ruined. Out on the highway, then, I expected it to struggle when I asked more from it, and to a certain extent, that is true. It’s not the engine, mind. Press down hard on the right pedal and the Q7 bursts into action rather unexpectedly. There’s a strong pull to the redline, especially in Sport mode, making the Q7 feel at least two sizes smaller than it actually is. And equally, the gearbox plays its part well, too. Seamless, quick gear changes are par for the course here. The only fly in the ointment is the chassis that tends to give up rather quickly when pushed hard. There’s a lot of body roll around corners and the resultant understeer makes for a rather confidence-sapping drive. Then again, that’s not what the Q7 is designed for, and it makes complete sense that it behaves this way. What it is designed for is a smooth ride, which is taken care of thanks to the meaty 255/55 R19 tyres handling all the bumps and craters with ease. It’s also great at absorbing road noise and wind noise; no wonder the cabin seems so insulated from the outside world.

The Q7, then, is now much improved in a lot of areas where it matters over the previous iteration. Possibly the only unfortunate bit is the fact that you can’t get it in a diesel option anymore, but that’s to be expected going forward. But for anyone else that’s looking for a comfortable, luxurious and well-specced premium SUV, the Audi Q7 is hard to miss.