Have TV debates been reduced to a mudslinging fest?

"If you watch news at 9 pm on TV, then you will realise why TV is called an idiot box," says Congress spokesperson Sanjay Jha 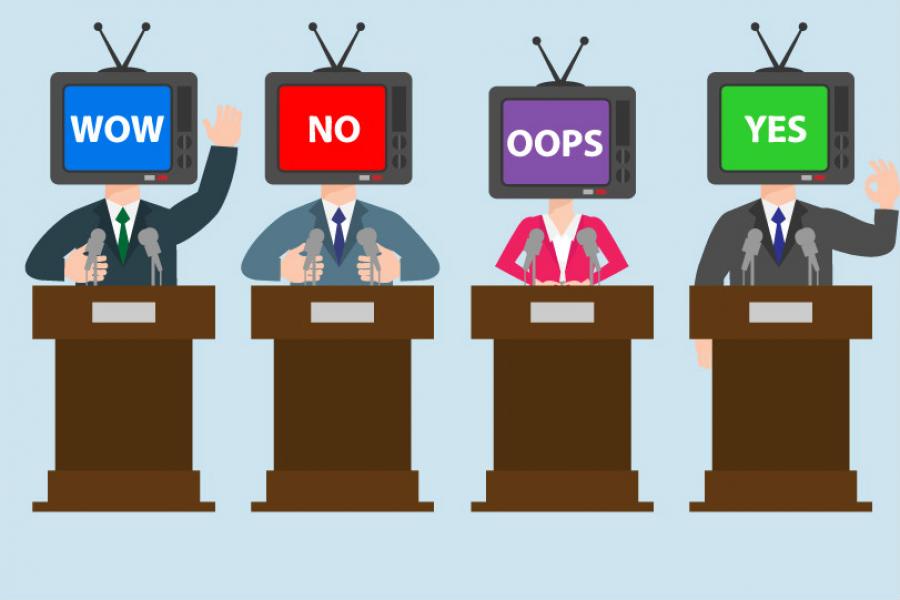 Image: Shutterstock.com
In the last decade, broadcast news has evolved from an anchor merely reading out the top headlines to, today, anchoring prime time debates on the most ‘news worthy’ issue

“If you watch news at 9 pm on TV, then you will realise why TV is called an idiot box.” These are the words with which Sanjay Jha, national spokesperson, Indian National Congress Party, began a panel discussion – News on debate channels – at the second day of the Ficci Frames conclave in Mumbai.

In the last decade, broadcast news has evolved from an anchor merely reading out the top headlines to, today, anchoring prime time debates on the most ‘news worthy’ issue. Whether this has led to noise replacing information and whether this is the future of news on TV were largely the topics discussed on the panel.

Jha made his stand clear at the onset, that while news is business and debates are a healthy form of discourse, the big issue is that it has today been reduced to a mudslinging fest. With the anchors holding a pre conceived notion about the debates.

His co-panelist, Amish Devgan, consulting editor, Zee Media Group, strongly differed. “Should we then sit back in the Doordarshan era, where nobody was allowed to question the status quo?” he asked. He added that while some channels do go overboard in their debates, the audience is wise enough to understand the difference. “Today, we are atleast allowed to question. We may not get the answers, but when politicians shy away from giving clear answers, the people know who is lying,” he said.

Prahlad Kakkar, founder, Genesis Films Pvt. Ltd, concurred. “If debates did not happen on TV, violence would be happening on the streets,” he said. Devgan added  that debates even happen in coffee and tea stalls. The only concern, if any, he said is lack of positive news.

In fact, he added that the capsules of their news debate do well on social media platforms like Facebook and Twitter. Jha too acknowledged that this debate format exists because there is an audience for it. “My CEO friend told me that after coming back from a busy day at work, he finds this drama, blood fest and survival of the fittest kind of debate cathartic,” said Jha.

This was countered by Jha, who cited the example of a television anchor who doesn’t quite follow this due diligence.

At this point, the debate veered off tangent, discussing topics from Kanhaiya Kumar to Vyapam Scam. With great difficulty, the moderator, Govindraj Ethiraj, co-founder, Ping Digital Broadcast and veteran journalist, brought it back on track.

Albeit with a few suggestions such as – debates must not mean disruption, all panelists must get equal time to voice their opinion and that the anchor must not begin with a conclusion in mind – all panelists agreed upon the fact that debates are necessary and will very much be a part of news discourse.

Tweets by @forbesindia
Digital news is the future, but credibility vital too
Payment banks to challenge traditional banks: Saurabh Tripathi