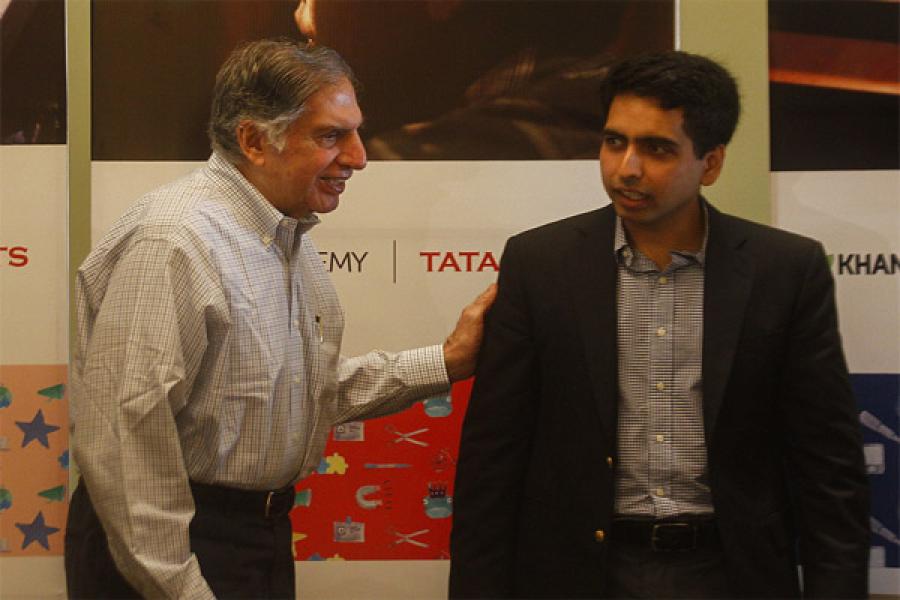 Ratan Tata (left) with Salman Khan, after announcing the partnership between Tata Trusts and Khan Academy on Sunday in Mumbai
Tata Trusts, among India’s oldest non-sectarian philanthropic organisations, and Khan Academy, a not-for-profit education initiative founded by Silicon Valley-based educationist Salman Khan, announced Sunday they were joining forces in a five-year partnership to leverage the power of technology to provide free, world-class education for anyone, anywhere in the country.
The partnership will focus on developing tech-enabled, high quality and localised education resources across India by providing a personalised, mastery-based learning experience. The Khan Academy is today one of the most influential education initiatives in the world, and started off as simple software and YouTube tutorials before gaining traction worldwide.
A former hedge fund analyst, Khan, who began the initiative as a teaching platform for his cousins back in the mid-2000s, is now regarded as one of the world’s most influential voices on education, and the Academy’s library covers content which ranges from kindergarten to early college math, and subjects like biology, chemistry and physics and also economics, finance, music, philosophy and art history. The Academy has 30 million registered students and has delivered over 580 million lessons and over four million exercise problems.

Speaking to the media on the initiative Sunday morning, Tata Trusts Chairman Ratan Tata said: “I would like to emphasise how important this initiative is to Tata Trusts. We have been in education for almost 100 years but mostly in the traditional form of education, which involves giving grants to institutes or providing scholarships for people to study overseas. Sal Khan has created a concept which is refreshingly different, of providing free education to anybody, in terms of providing access. He has created a concept for providing knowledge to anybody, anywhere at any time provided they have a device. It’s something that can, in fact, change the world and the illiterate to the literate as we move forward.”

Tata said, for India, the partnership could make an enormous difference. “I look at this as something which can make a difference for generations to come.”
“Khan Academy exists to empower students of all levels, all over the world. Our goal is to use technology to humanise the education sector on a global scale,” Khan said. The initiative will also aim to collaborate with public and private sector partners to empower and equip students, families and teachers.

Khan said he had met Union Minister for Human Resource Development Smriti Irani during his India trip and she was receptive to the idea of what the Academy was doing. Khan had also met Prime Minister Narendra Modi when the latter visited the United States in September this year.

The partnership, Tata and Khan said, was founded on the belief that technology can help the country to provide a quality education to everyone. The growing mobile and internet penetration and the growth of cheaper smartphones also means that such initiatives are getting easier to push through. This could help push through education on an unprecedented scale, they said. “Interactive and adaptive tutoring platforms can provide a personalised, self-paced, mastery-based learning experience, allowing every learner the opportunity to truly master the foundational concepts at her own pace and achieve her full potential,” Khan said.

Khan said this is the first time that the Academy, which now employs around 100 people, is setting up a dedicated team in India. “All that we wish to achieve is not going to happen overnight, but we have this vision,” he said.

“By 2009-10 I decided to turn it into a not-for-profit and since then it has been an ever-accelerating ride. It shows how much hunger there is for people around the world to tap into their potential. Until recently, our primary focus has been in English. My family has roots in India, so it’s also very close to our hearts. A few days ago, we also announced the launch of our Hindi portal,” Khan elaborated.

“What we’re hoping to do for hopefully many, many decades is for Khan Academy to be an Indian organisation with a vision that any learner, not just child, in India is capable of tapping into their potential on the subjects that are highest yield to them in the languages that are most relevant to their context and is able to access it in the ways that are most accessible, whether it is through a computer or low-cost cellphone,” he said.

“Four-five years ago, I was based out of a walk-in closet, and when I wrote the mission statement, it felt a little bit delusional – free, world class education for anyone, anywhere. But having seen 30 million users and when I see the potential in India, it feels a lot less delusional now,” Khan added.

The partnership will be phased into two stages. The initial stage of two years will involve developing a robust set of educational resources that are tuned to the particular needs of middle- and low-income students in urban environments. Building upon the Academy’s existing tools, major efforts will be dedicated to developing a technology platform which enables a seamless user experience across desktop and mobile, apart from creating high-quality academic content aligned to local curricular standards and in a relevant language. The initiative will also support the adoption and use of these resources by the learners. The second stage will involve branching into additional content areas, based on the experience of the first phase, and strengthening the ecosystem to help learners in a diverse set of environments.

Tweets by @forbes_india
Being a pastry chef: Because it's worth it
The hills are alive with cheese