As the young, urban male shells out generously on grooming, startups dealing in men's cosmetics are mushrooming fast and coming up with specialised products 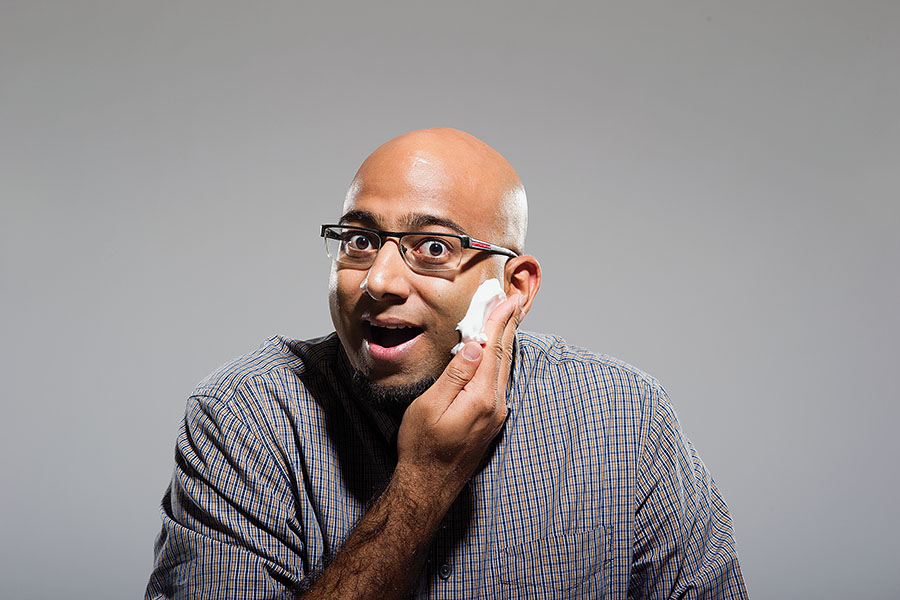 Shivanshu Nirupam is as particular about his appearance as he is about his work. The 25-year-old assistant director at Colour Yellow Productions, a Mumbai-based production house which makes movies, spends at least 30 minutes daily on grooming himself. This includes using top-quality products such as a branded shampoo, specialised oil and conditioner, cocoa butter body lotion, an anti-perspirant roll-on and a sun block lotion. 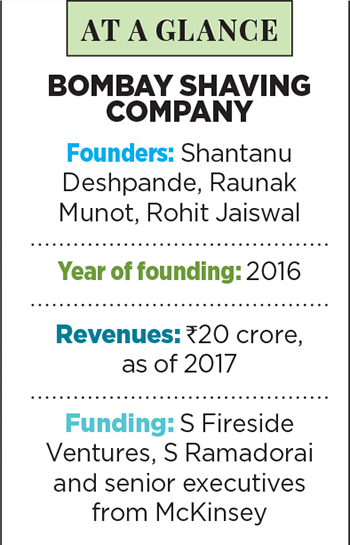 “I look at myself in the mirror first; it is vital for me to be well-groomed,” says Nirupam, who spends around ₹5,000 a month on cosmetics meant exclusively for men.

Similarly, Conrad Dias, 26, from Ranchi is aware of the need to look presentable before he starts his job with a media house in Hyderabad. So, to combat the problems arising from his oily skin, he uses a face wash that promises to get rid of the ill-effects of dirt and pollution. Plus, there’s a body lotion that doubles as a moisturiser. And to style his medium-sized, lumberjack beard, there’s a nourishing beard oil, wash and serum. “I always wanted to keep my beard healthy; it was patchy earlier. The oil has helped fasten its growth,” says Dias, who takes almost 25 minutes to get ready, and shells out between  ₹1, 500 and  ₹2,000 every month to buy personal care products online.

Both Nirupam and Dias are among a growing tribe of ubersexual men, confident and conscious about the clothes they wear and how they look. A higher disposable income and the hunger to climb the corporate ladder have redefined the needs of male grooming and, in the process, created an attractive market for companies dealing in men’s products. 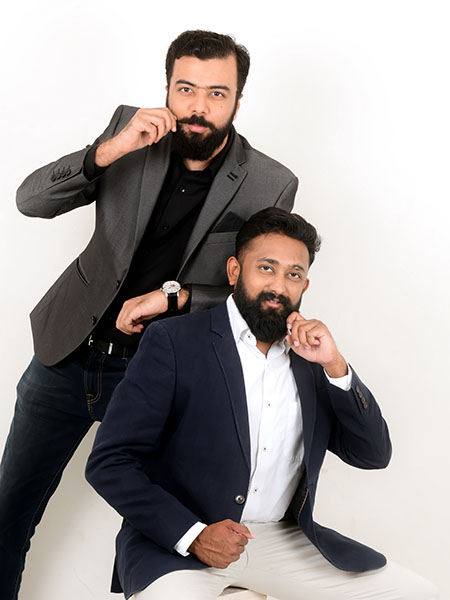 Look, we are changing
The men’s grooming market is one of the fastest growing ecosystems for startups in the consumer brands space. It is estimated to be around  ₹10,500 crore in size, growing at 10 percent each year, according to 2017 data from Market Intelligence, a market research firm that provides customised research across markets, brands and products. 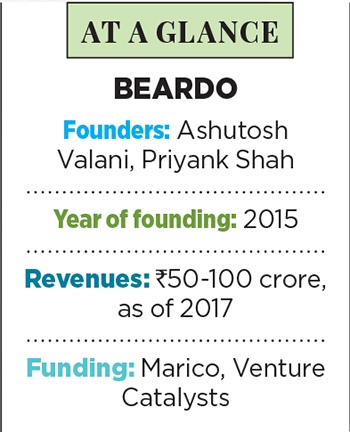 Startups such as the Bombay Shaving Company, LetsShave, Happily Unmarried, which operates the Ustraa brand (in which Wipro Consumer Products is likely to pick up a 20 percent stake), Singh Styled, Beardo (in which Marico has a near-45 percent stake) and The Man Company (Emami has a 30 percent stake in it) are some of the popular companies dealing in men’s grooming products that have mushroomed in the last four years.

Till recently, companies like P&G India’s Gillette India enjoyed a monopoly of 80 percent in volume and about 70 percent in value while Colgate Palmolive dominated the oral care segment with an 80 percent share (it is now down to 56 percent). However, the market was vast and its potential was waiting to be tapped.

In the personal care products space, larger consumer brands such as Hindustan Unilever, P&G India, ITC, Godrej Consumer Products and Marico, till recent years, manufactured only a limited range of products meant only for men. That resulted in men buying what was readily available or those made specifically for women.

Shantanu Deshpande, 31, founder and CEO, Bombay Shaving Company, explains this abnormality. He quotes data from a 2017 Euromonitor report and says that of the  ₹65,000 crore worth of personal care products bought by Indians,  ₹25,000 crore are used by men. However, only  ₹10,000 crore worth of products are made specifically for men.

But men in a changing India were not willing to compromise. A large percentage of young Indians were moving to urban centres for better jobs and lifestyle, and mushrooming ecommerce portals and the proliferation of youth-savvy apps like Instagram and Tinder were tailoring their platforms to meet their aspirational needs. Grooming, as a category, too, refused to lag behind.

Deshpande, who had studied consumer brands while working as engagement manager (FMCG, sales and marketing) at McKinsey India in 2013-14, developed an interest in the men’s grooming market when he met investors of US-based razor and shaving products firm Dollar Shave Club in 2013. He subsequently met FMCG experts and researched the market for another year before launching the Bombay Shaving Company in late 2016. Along with him were his schoolfriend Raunak Munot, 31, who was director of social strategy, GroupM, in New York, and college friends Rohit Jaiswal, 32, sales and distribution manager at Emel Group, and Deepu Panicker, who has since exited the company.

The Bombay Shaving Company, says Deshpande, has 65,000 customers, with a 50 percent repeat ratio. It manufactures around 25 products, claims total sales of  ₹20 crore as of 2017 (it grew four times from 2016), with a fourth of them coming through offline stores in Mumbai, Delhi, Bengaluru, Pune, Ahmedabad and Chandigarh. The company aims to expand to 100 products by 2020.

“I was lucky enough to be backed by investors, for up to  ₹4 crore, in the early days,” says Deshpande. The company then raised $2.4 million ( ₹16 crore) in July 2014 from early-stage investment firm Fireside Ventures (led by Kanwal Singh and Vinay Singh) and three to four other investors. Deshpande plans to raise more capital by mid-2018 for brand building and technology.

A few months prior to the launch of the Bombay Shaving Company, another men’s grooming brand, Beardo (from Zed Lifestyle company), was set up in October 2015 by Ashutosh Valani, 31, and his friend Priyank Shah, 29, in Ahmedabad. Valani had completed his master’s in international business from Brunel University in London and had gathered experience in ecommerce through a trading platform ‘Aajkiitem’ in 2011. “In those early days, we found that people were searching for and buying men’s deodorants, and looking for products such as hair waxes. We realised there was a need… and ventured in to manufacture beard oil and wash,” says Valani.

Beardo now has 40 products, a fifth of which are beard related. Valani pegs the company’s annual sales at between  ₹50 crore and  ₹100 crore as of 2017; 60 percent of them come through the online medium while the balance is through sales to 5,000 salons across India. Beardo claims to have 25 lakh customers, with a 30 percent repeat ratio. 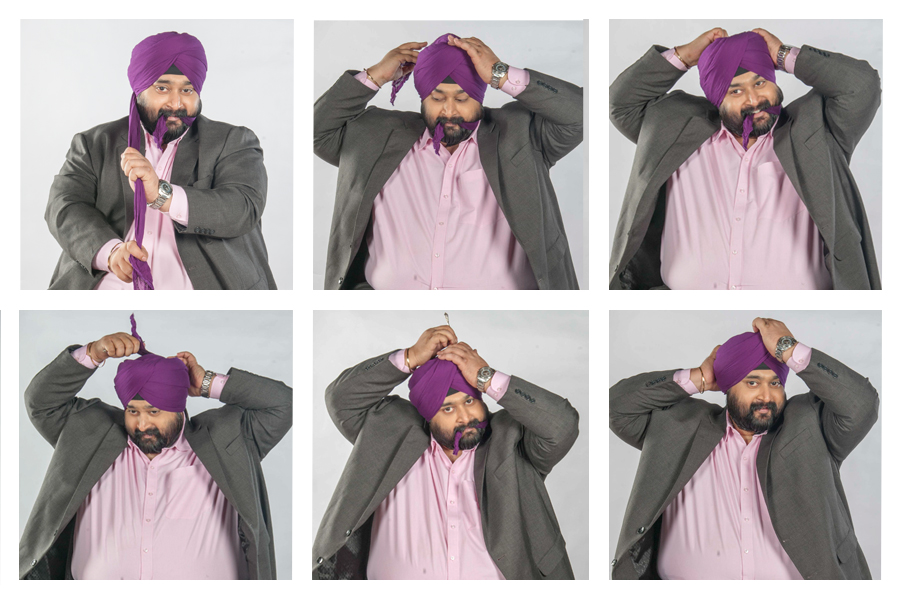 Charanjeev Singh, the founder of Singh Styled
Image: Mexy Xavier
Community focus
Between 2012 and 2014, entrepreneur Charanjeev Singh, 36, headed startup Sportizen, which helped create an ecosystem for people to play the game of their choice without a club membership. After that, Singh decided to set up a men’s grooming company, Singh Styled, to cater to the needs of the Sikhs, a community known for its long hair. Singh Styled caters to 30,000 customers as of 2018, with a 71 percent repeat ratio. Interestingly, about 60 percent of its customers are non-Sikhs and 15 percent of the startup’s orders come from overseas (the US, the UK, Canada, Singapore, the UAE and Dubai). 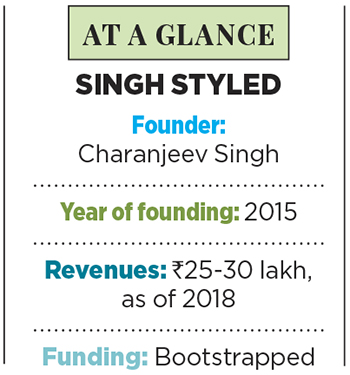 Singh, who set up his company with a bootstrapped investment of  ₹13 lakh, claims to have sales of  ₹25-30 lakh a year with monthly shipments of around 900 products. “Singh Styled came about to meet the need for better beard care, better turbans, and styling and grooming advisory for Sikhs,” says Singh.

Forty-two percent of Singh Styled’s sales are beard products while 30 percent are turbans. Its best-selling product is a beard setter priced at  ₹299; the company sells about 400 to 600 units of the product per month.

The popularity of such startups has compelled personal care giants such as HUL, Nivea, ITC and Emami to up their game. The picking up of equity stake by Marico (in Beardo) and Emami (in The Man Company) is just one step. Some of these companies have pumped revenues back into the marketing budget of men’s grooming products.

The funds game
Despite an evident demand for such grooming products, private equity firms and venture capitalists have traditionally not backed too many consumer brand businesses in India. Instead, they have preferred to focus on technology, health care and financial services startups. The few exceptions are Sequoia-backed Yellow Diamond (Prataap Snacks), WestBridge-led Vini Cosmetics (Fogg deodorants), multiple investors in Hector Beverages’s Paperboat and Belgium-based Verlinvest and DSG Consumer Partners in Drum Foods’s yogurt brand Epigamia. 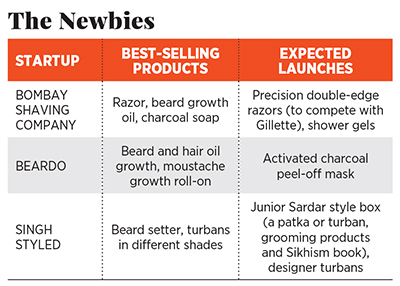 Fireside’s Vinay Singh says the consumer brand business story has moved far away from when companies looked to innovate through market gaps relating to the product, pricing or packaging. In the modern ecosystem, the marketplace and brands are already created by shopping malls and consumer feedback is instant, through online reviews, which can be mined by product innovators.

Singh says Deshpande came with a fresh perspective and a long-term vision. “He knew he had to create disruption in the minds of the customers before getting into their wallets,” he says, while explaining why Fireside invested in the Bombay Shaving Company.

He adds that Deshpande’s focus in the coming years would have to be on building the digital and technological capabilities and engaging more with customers, through trials and other offers. “This is not a winner-takes-it-all market and it will continue to grow,” says Vinay Singh.

In fact, Emami, an investor in Gurugram-based The Man’s Company, is formulating its own strategy for growth. Harsha Agarwal, director, Emami, says, “The growth drivers in men’s grooming will be hair and face care products.”

At a time when premium salon franchises such as Truefitt & Hill are building a base in India, men’s grooming products startups will need to expand deeper and ensure their brands reach as many customers as possible.

Experts believe the yet-underserved men’s grooming market in India has the potential to become like South Korea’s in the next ten years.

South Koreans are the biggest consumers of men’s grooming products in the world, commanding 10 percent revenues of the country’s $12.7-billion cosmetics industry; the market grew by over 20 percent from 2012 to 2016, according to 2017 Euromonitor data. This could only mean a wider range of grooming products and better styled men.

Tweets by @forbesindia
Luxury is a matter of personal pleasure: Filippo Ricci
What the happiest two-career couples are doing differently