Chalo: Building mobility for tier 2 and beyond 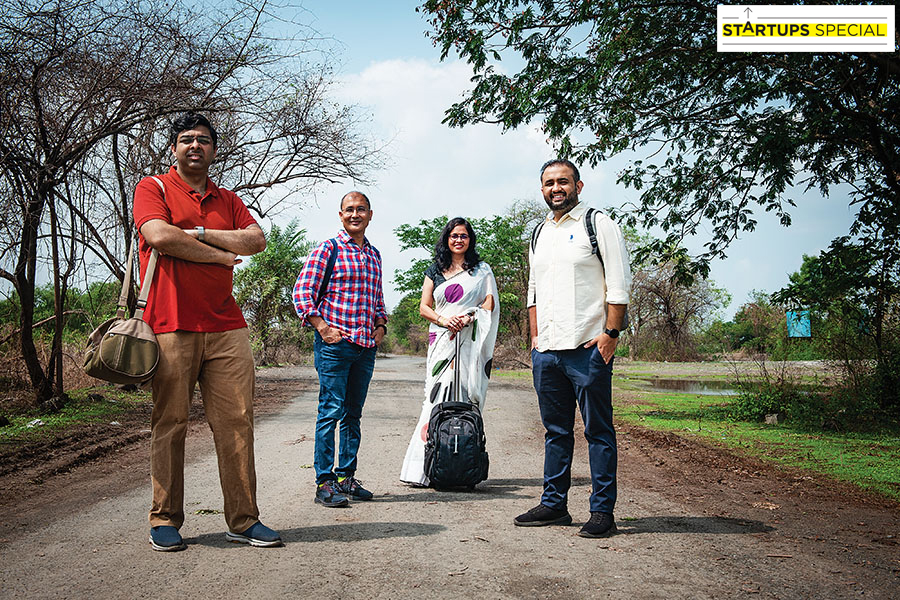 Mohit Dubey had a change of heart in Bhopal. The young software programmer from Mumbai, who just got his prized US visa, decided to spend three months with his in-laws in Bhopal before joining his overseas job. Dubey started working at a small company in the capital city of Madhya Pradesh—known as the Heart of India—which provided citizen-centric services to villagers such as getting a birth certificate and a copy of land records. During one of his visits to a remote village, he discovered a shocking side of the countryside: People didn’t have access to doctors; one had to wait for hours to get a bus; and many died because they couldn’t reach the city hospitals on time.

Dubey dumped his US dream. “Dying due to lack of health care access is outrageous and not acceptable,” he says. The software programmer decided to take a stab at telemedicine to solve rural India’s woes. The idea was to connect distant villages with district hospitals. The problem, though, was that very few believed in his idea. For three years, Dubey made futile attempts to convince government officials and politicians, but to little avail. His telemedicine venture did not got a green light.

Two years later, Dubey, along with three co-founders, started CarWale, an automotive classified portal in 2005. The idea was to solve the mobility needs of urban India. Five years later, after scaling the venture—it was among the top three players; the others being CarDekho and CarTrade—Dubey sold it to German media conglomerate Axel Springer, one of the largest multimedia companies in Europe which picked up a 52.1 percent stake. Another 18.3 percent was bought by the India Today Group. “The offer was too tempting to resist,” he recalls, declining to share the deal size. There was another reason to sell out. The first-time entrepreneur wanted to expand his maiden venture abroad. A big European partner with deep pockets, he thought, was best suited to make CarWale live its global dream. 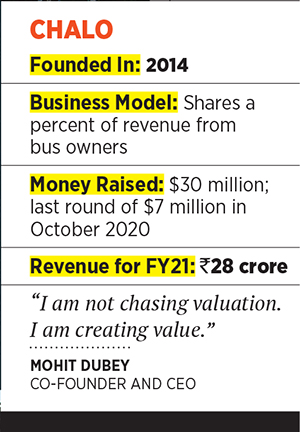 A decade later, in Mumbai, Dubey was again listening to his heart. This time it was influenced by Peter Thiel. The German-American billionaire entrepreneur and venture capitalist once talked about two kinds of businesses: One with competition, and one without. Dubey yearned for two things: A business without competition, and a venture which touched the lives of millions in smaller cities, towns and villages. “Look at Facebook, WhatsApp and Google,” he reasoned with himself. They don’t have competition. “I was a victim of a business which had competition,” he recalls.

By 2013, Dubey realised that cars were not the best vehicles to reach out to the masses. Car penetration, which was one car for 100 Indians in 2008, had laboured to two cars per 100 Indians in five years. A reason for the muted growth in car ownership in cities was largely due to the mushrooming services of Ola and Uber which had made city slickers stay away from buying cars. “Indian mobility is definitely not cars,” he concluded. Buses had the wheels that moved Bharat. 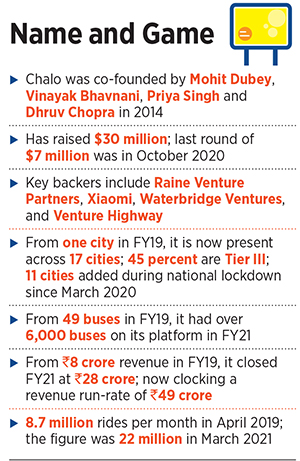 The bus segment, he reckoned, was not only six times as large as the entire taxi segment, but it also presented a $20 billion opportunity.

In 2014, Dubey formed Chalo, a division within CarWale, to solve the mobility issues of millions residing in Tier II and beyond. He put in his own savings, managed to get money from Neeraj Arora, a former chief business officer of WhatsApp; Amit Singhal, a former Google Search head; and Anupam Mittal, founder of Shaadi.com, and rolled out Chalo, an intra-city mobility platform for bus commuters.

A year later, in November 2015, CarWale got sold for the second time. Rival firm CarTrade became the new owner, and after two years, Dubey left CarWale to join Chalo. For the first three years—2014 to 2017—Chalo was helmed by Vinayak Bjavnani. It remained confined to Bhopal, provided live tracking of buses and multi-model trip planner services to commuters through its ETA app, had zero revenues and no business model. 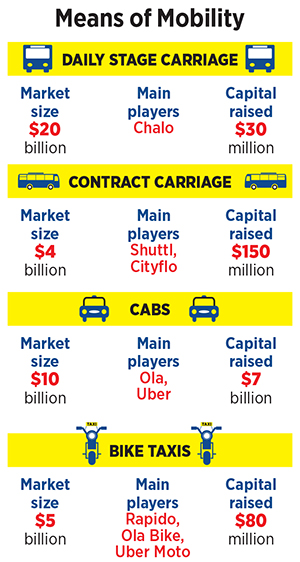 Cut to March 2021. Chalo posted ₹28 crore revenue in FY21, and is now clocking a run-rate of ₹49 crore. It has over 6,000 buses on its platform across places such as Meerut, Mathura and Prayagraj in Uttar Pradesh; Shimoga, Udupi and Hubli in Karnataka; and Jabalpur, Sagar and Indore in Madhya Pradesh. Chalo counts WaterBridge Ventures, Raine Venture Partners and Xiaomi among its backers. “Our mission is to solve the daily commute for masses,” says Dubey. While in big cities, buses serve as one more mode of transport, in Bharat, they are intrinsic to mobility. “Buses are the heart of transportation for smaller towns and villages,” he says.

The progress was rapid. After all, in 2017, Chalo was a one-city operation. Though it was solving the commuting woes of the masses, it didn’t have enough oxygen to survive. Dubey decided to change the business model from 2018. Chalo couldn’t charge from users who found live tracking of the buses useful, while bus operators had no interest to pay a penny to the startup which promised to streamline operations. 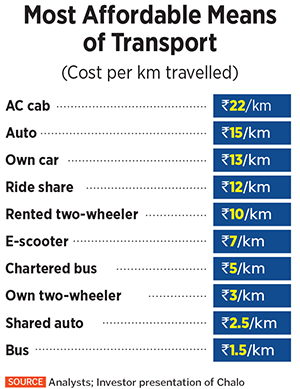 Dubey dangled a bait: Guarantee money. The business proposition for bus operators in Bhopal was simple: The daily revenue of buses—whatever it was—was paid by Chalo every day in the morning. In return, Chalo took care of automation of daily operations, vehicle tracking, in-bus electronic ticketing, bus consumables and cost savings on fuel. The idea was to increase ridership and reliability by scheduling buses on time and improving consumer experience. The extra money made over the mutually-agreed daily amount was shared between the operator and Chalo.

The business made sense. Eighty percent of the buses in India, Dubey and his team figured out, were run by small private operators. “India has over 5 lakh buses for daily commute, and only 1.5 lakh are run by the government,” claims Dubey. Another insight gathered was that over 80 percent of the buses clocked under ₹7,000 every day. Buses, says Dubey, were running with only 35 percent utilisation. Chalo promised to change the game for bus owners. 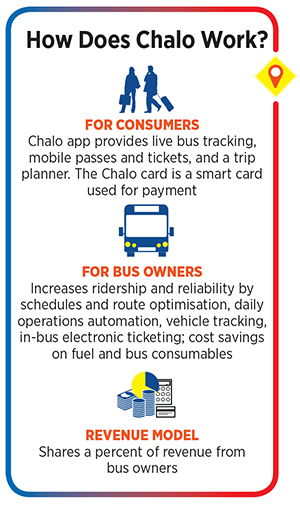 Dubey started with one bus, and gradually increased to 100 in Bhopal. Within three years, Chalo got over 6,000 on its platform. The business prospered post the lockdown last March. People wanted a safer mode of transportation. Dubey’s full-tech stack offering—mobile passes. electronic ticketing and smart card for payment—found ample takers among bus owners who stopped taking guarantee money. From 8.7 million rides per month in April 2019, the number jumped to 22 million in March 2021. “Buses,” stresses Dubey, “are Covid proof.” Chalo, he lets on, grew by three times during the pandemic in terms of number of buses added on the platform.

“Chalo is reimagining public transport experience,” says Priya Mohan, partner at Venture Highway, a venture fund investing in early-stage startups. Given the stakeholders involved—government, bus operators and the public—the complexity of the problem is high. To emerge as a winner in such an environment, a deep understanding of the stakeholder personas and their incentives, structural challenges and levers for scale are super critical. “Chalo has done just that,” reckons Mohan. As early investors in Chalo, Venture Highway’s investment was driven by two factors: Size of the problem in Bharat, and the real impact it could have. “Nothing connects more to Bharat than its public transport such as buses and trains,” he points out.

The challenge for Chalo is equally large. The biggest irritant is monetisation. “Monetisation remains a challenge in Bharat,” says Srikrishna Ramamoorthy, partner at Unitus Ventures. This is a price-sensitive market and demonstrating real value is critical to getting users to pay for the product or service; else one needs to rely on other sources such as advertising. On the positive side, he adds, user acquisition costs are coming down and micro transactions are monetisable. “If one can offset costs through newer monetisation models, this challenge could be solved,” he says. Building trust, he underlines, takes time in the hinterland.

Dubey doesn’t have any illusions about overnight success. Though he had his share of backers, most of the funders have shied away from taking heavy bets as there is no equivalent model in the the US or China. “Chalo is quintessentially an Indian model,” he says.

Chalo, Dubey asserts, will be the first bus unicorn in India. “But I am not chasing valuation. I am creating value,” he says, adding that Chalo’s team has its heart in the right place. “We are building the largest mobility company.”

Tweets by @forbesindia
Amazon's Jeff Bezos to fly to space; Apple WWDC; G7 agree on tax on big tech; The Nevera hypercar; and a chat with Stellapps's CEO Ranjith Mukundan
Google will pay $270 million to settle antitrust charges in France