As the landscape, featuring homegrown JioSaavn, Gaana and Wynk, becomes more competitive with the influx of international players such as Spotify, Amazon and YouTube Music, apps are creating and curating content to suit regional tastes 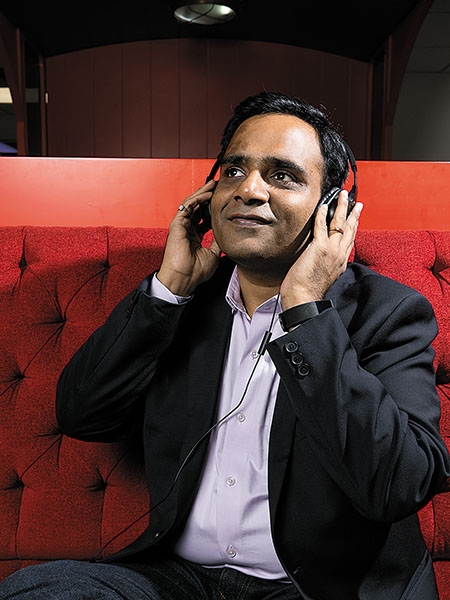 
A decade or so ago, streaming music over the internet in India was left to the mercy of slow data connections. Listeners also remained bound to their desktop computers or laptops, as they created and listened to their favourite playlists. But now, thanks to the ubiquitous smartphone, and data connection speeds that have finally caught up with demand, streaming music has become a seamless and stress-free activity.

What has helped, along the way, is the emergence of homegrown streaming apps and platforms that offer a wide variety of music, ranging from regional Indian pop and Bollywood, to Western classical and K-Pop. The dominant position that digital platforms have come to occupy can be gauged from the fact that that 78 percent of revenues for the recorded music industry in India now come from digital distribution, according to a 2019 IFPI Global Music Report.

“Everything has changed in music,” says Rishi Malhotra, the New York-based co-founder and CEO of JioSaavn. “Albums have shifted to singles. Annual releases have shifted to quarterly drops. Playlists placements are coveted. Listening on repeat is essential to lead the charts. Songs are shorter. Access is ubiquitous. Data is being applied to everything: From platform features to UI placement to projects being greenlit.”

Streaming platforms have two broad revenue channels: A premium, subscription-based model where listeners pay a fee and don’t have to listen to advertisements, and a freemium model where listeners get music for free, along with advertisements. The KPMG report says ads bring in 90 percent of revenues for streaming platforms, the rest coming from subscriptions.

While domestic streaming platforms started in India in 2007, with the emergence of Saavn (now JioSaavn), international platforms such as Spotify, YouTube music, Amazon Prime Music and Apple Music also entered the fray from 2015, with Apple launching Apple Music. “Today there is a fairly competitive landscape,” says Jehil Thakkar, partner, Deloitte India. “In addition to streaming, there is now increased stress on original content... people are starting to invest in original programming and content, which includes audio material such as podcasts and talk shows. They are reviving the Indian indie pop genre, as well.” 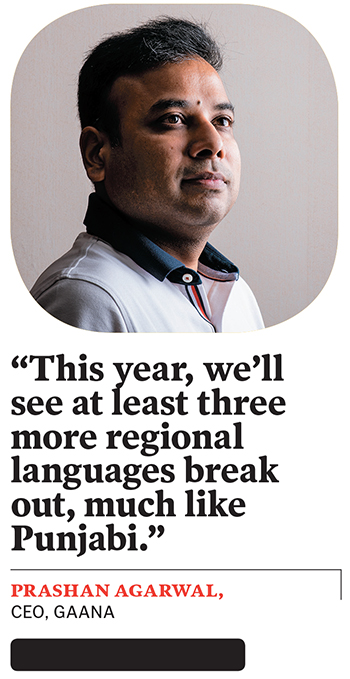 “In 2018, we were doing Gaana Originals, one season per year,” says Prashan Agarwal, CEO of Gaana. “But this year, we’ve launched two seasons already, one is called the Originals Punjabi, the other one is called Originals Love Edition.” The choice of originals has perhaps been influenced by the fact that 35 percent of the content Gaana’s listeners stream is regional music, predominantly Punjabi. The platform offers music in 12 regional languages.

The other way of attracting listeners is through regional content. For instance, content on JioSaavn, which debuted in 2007 as a Bollywood music distributor for iTunes and other music platforms, is now available in 16 Indian languages. It recently launched a ‘Made By’ campaign, inviting leading musicians to curate personalised playlists on the platform. Six months old in India, Spotify—one of the biggest global music streaming brands with over 3 billion playlists—has created over 200 playlists for the Indian market. This includes algorithmic ‘city-based’ playlists and country charts in five or six Indian languages. Apple Music’s famous A-List playlists for the Indian market comes with A-List Bollywood, A-List Tamil, A-List Punjabi and others. The app also offers 14 Indian language radio stations and eras.

Punjabi pop songs and regional film songs are making their way to the top of the charts. “This year, we’ll see at least three more languages break out, much like Punjabi,” says Agarwal of Gaana.

The popularity of regional artistes on social media platforms could be an indicator for this. For instance, Satyajeet Jena, a 15-year-old from Odisha, has 5.5 million subscribers on his YouTube channel, with one of his singles ‘Chahunga Main Tujhe Hardam’ crossing 243 million views. Orasaadh by Sony Music Madras Gigs, which creates original Tamil songs on YouTube, has crossed over 70 million views.

In March this year, YouTube launched its music streaming app and offers content in 10 Indian languages, with a diverse catalogue of songs, albums, playlists and live performances. “India is one of our fastest growing markets globally and we’re excited to see future growth in online streaming in India,” says Pawan Agarwal, head of music content partnerships (India & South Asia), YouTube. “We also see in India more and more people using video for entertainment and learning.  And by 2020, it’s expected that 500 million internet users will consume online video. The momentum and potential is vast.”

A 2018 IFPI Music Consumer Insight Report says that Indian consumers spend an average of 21.5 hours a week listening to music, compared to the global average of 17.8 hours a week. Despite this, India is a very small market for audio streaming in terms of per capita revenue as compared to the US and UK, although it is fast growing. According to Vision 2022, a report by The Indian Music Convention 2018, India’s per capita revenue stands at 10 cents, while it is 21 cents for China and $21 for US.

Piracy, too, remains a big challenge. In a population of about 1.4 billion, only 165 million people (the number of monthly users on streaming platforms) consume music legally, says Amarjit Batra, managing director India, Spotify. “India is positioned as the global capital of piracy, owing to the fact that three out of four internet users listen to pirated music,” he says.

But despite the lifeline that streaming apps seems to have thrown to the music industry, it is only through mass adoption of these platforms, with listeners willing to pay for premium subscription models, that artists, producers and platforms can successfully thrive.