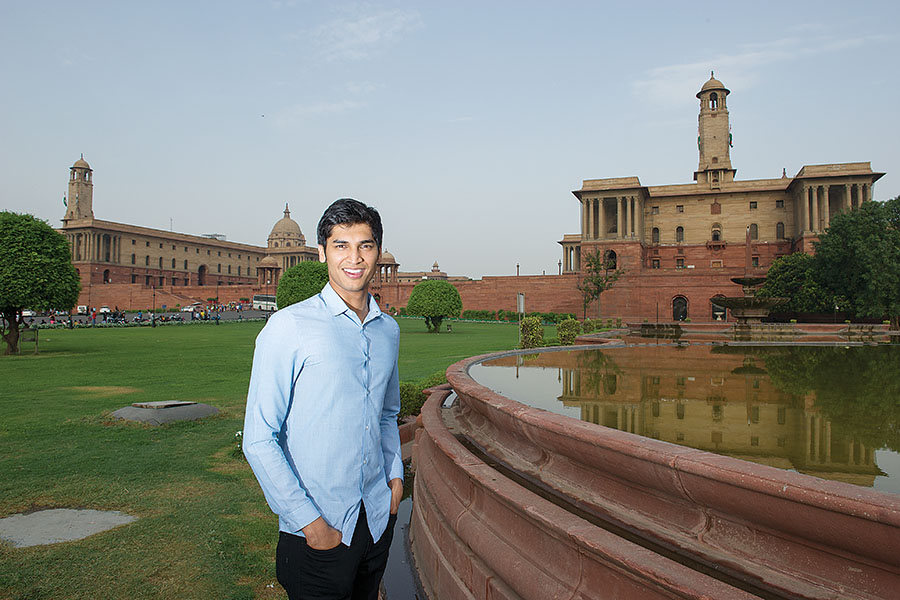 Pratham Mittal likens politicians to restaurants. “After all, both thrive on good ratings,” he argues. In an era where nearly everything—from Uber drivers to food joints—can be graded on the internet, the 27-year-old has built an app, aptly named Neta, which allows voters to rate their local politicians and even revise the votes based on their performance.

“Restaurants provide high levels of service and keep things neat because they know they will be rated on apps like Zomato and Yelp,” says Mittal. “I thought, in India, we should have something similar to rate our politicians. After all, they are concerned about their ratings.”

The Neta app is available on Android and iOS platforms, and voters can also poll from a website. Mittal wants to build a company, along the lines of Gallup in the US, which will gauge changes in political preferences, and quantify public mood.

In May, Mittal claims he polled 2.5 million votes during the Karnataka legislative assembly elections. (The service is currently operational only in Karnataka, and Rajasthan’s Ajmer and Alwar constituencies.) That meant, he was able to see a hung assembly, much before popular psephologists called it. “We had a strike rate of 92.7 percent, which is much more than anybody else’s,” says Mittal.

Entrepreneurship runs in Mittal’s blood. He comes from the family that founded the legendary Lovely Sweets shop in Jalandhar, Punjab. The Mittals also run the Lovely Professional University, where his father, Ashok Mittal, and mother Rashmi, are chancellor and pro-chancellor respectively. 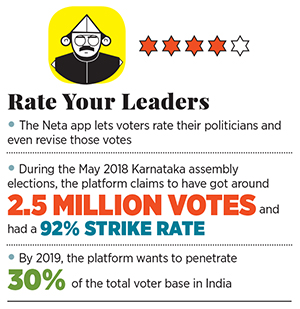 From the Doon School in Dehradun, Mittal went to study at the University of Pennsylvania in 2009, where he graduated in engineering and political science. While in his third year, he started his first venture Outgrow, a platform that enables polling on websites; he claims it is used by over 4,000 publications.

“Right now, Outgrow is the largest polling technology platform in the world,” says Mittal. Polls conducted on the websites of publications like The New York Times, Wall Street Journal and The Guardian are all powered by Outgrow,” says Mittal. “So, we have been in polling for a while and understand the business well.”

While Mittal continued to build Outgrow in the US, he also felt the urge to return to India and do things at the grassroots level. “My first love is politics,” he says. “I saw the impact of review platforms across the world. If politicians can be reviewed and rated, perhaps it can change [their] behaviour as well.”

The app tested the waters during the Alwar and Ajmer Lok Sabha bypolls early this year, during which it polled around 250,000 votes. Although much of that didn’t come through the app—Mittal and his team used IVR, SMS, a website and door-to-door polling to gauge the mood—Mittal’s New Delhi-based company went all out during the Karnataka assembly elections in May.

For the election, the app was rolled out, while also relying on SMS, IVR and websites to assess the mood. “We did a huge Facebook campaign,” says Mittal. “In all, we got around 2.5 million votes, and had about 100,000 app users. When we send out an SMS to users, the open rate is around 66 percent and the response rate is 52 percent,” says Mittal.

True to his vision of building a Gallup-like company, Mittal’s app can gauge the mood of a constituency even when there are no elections. Users are given one vote each for their MP and MLA, and they can change that if they believe their leader is not performing. That would reflect on a dashboard, where the entire user base can see the politicians who are leading and the ones lagging behind.

At the moment, the company follows a model of cumulative votes to gauge the mood. “Unlike with [food aggregator] Zomato, we think, politicians don’t really care about their grade. What they care about is the number of votes they have received. So we are following that model now. Voting is representative of the rating the politician will get,” says Mittal. The company, however, is planning to launch another tool that allows users to show their approval of the government. “That is on a five-point scale, as a poll,” he adds.

The app also has a forum where people can post issues and tag the constituency or their leader. “We have their [the local MP’s or MLA’s] phone numbers, and we can send them the notification if they aren’t on the app,” says Mittal.

Checking Fake Votes
In a country where fake voters have become a serious concern, Mittal believes he has sufficient checks and balances to ensure authenticity. Once a user registers on the platform, Mittal and his team do background checks through voter rolls, Aadhaar and apps such as Truecaller to ensure the authenticity of users.

Even then, there are challenges. For instance, political parties can use their men to jack up votes. But Mittal is quick to clarify: “We are talking of the law of large numbers. Because the mass is so large, there are only so many manipulations that people can do. At the end of the day, the data is going to be created by the real users.”

Mittal’s team has drawn up a database of constituencies across the country and the politicians who usually stand for elections from those areas. They have also created a list of the top five contenders for a particular seat and voters can cast an online vote for them based on their performance. That also allows political parties to distribute tickets to candidates in a more efficient manner.

The startup is now gearing up for the upcoming state assembly elections in Rajasthan, and eventually the 2019 parliamentary elections. The target for penetration is about 30 percent of the total voter base. “For a country of 100 crore, I don’t need a sample size of more than 1 crore if I do the right statistical sampling, which is what we are doing on the app,” says Mittal.

For now, Mittal hasn’t revealed how he plans to monetise the data. The company is bootstrapped, but that hasn’t stopped Mittal from hiring top talents. The company’s head of design Angad Kingra worked as the design lead of Zomato, while the CEO, Robin Sharma, co-founded the Citizens for Accountable Governance with political strategist Prashant Kishor.

“At the moment, it [monetisation] is not our agenda,” says Mittal. “We want to make politicians accountable. Monetisation will come down the road. I have been in the internet business for long, so I know how to monetise. Right now, I am sitting on some pretty interesting data.”

That data may well hold the key to a successful democracy in the smartphone age.

Tweets by @forbesindia
Who was the biggest TV advertiser in the first week of FIFA 2018?
Five Indian companies whose mantra is innovation