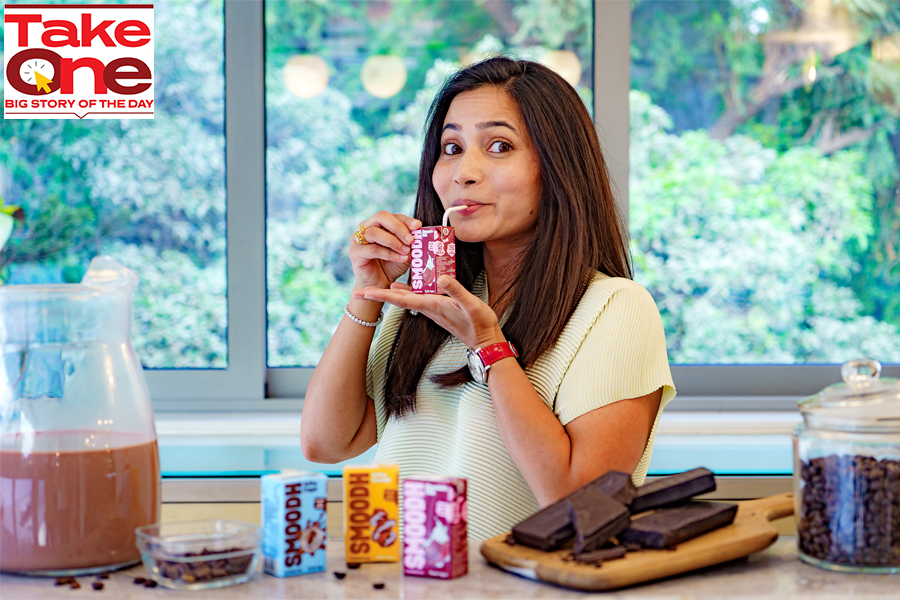 Nadia Chauhan, Joint Managing Director & CMO, Parle Agro at her home at Vile Parle, Mumbai. Image: Neha Mithbawker for ForbesIndia
A few months ago, Nadia Chauhan went on an excursion to Patalganga River, some 60 km east of Mumbai. Nestled amid the rocky Sahyadri mountains and flanked by grassy vistas, she noticed local kids wading into the cool waters holding packs of Smoodh—a newly launched flavoured milk drink from the house of Parle Agro, the Rs 2378 crore-by-revenue maker of Frooti. Chauhan, joint managing director, asked a colleague who had accompanied her whether she had distributed the palm-sized tetra packs to the kids. “No,” she smiled, shaking her head. “It’s become a rage here.”

“The biggest achievement of what we have done is take dairy beverages into the rural market, which had never experienced a packaged dairy beverage before,” says Chauhan. The high price points were a barrier, she says. Amul’s Kool flavoured milk drink, for example, sells at Rs 20 for 180 ml, while Hershey’s milkshake sells at Rs 35 for 180 ml. Smoodh, on the other hand, which comes in chocolate, toffee caramel and coffee flavours, retails at Rs 10 for 85 ml, giving it reach and accessibility. As a result, 50 percent of Smoodh’s revenue contribution today comes from rural markets. “It’s really thrilling,” beams Chauhan. Her infectious enthusiasm and charisma are palpable even over a Zoom call.

“Promotion karne ki zarurat hi nahi hai (it doesn’t need to be promoted),” says Sudhakar Shetty, a distributor in the Patalganga River area of Khopoli and other surrounding towns. “Bacche ko bahut pasand hai and mummy log ko bhi accha lagta hai kyuki doodh ka bana hai [Kids love it and mums also like it because it’s a healthy, milk-based drink].” Shetty has been a distributor with Parle Agro for nearly 22 years. He sells Smoodh stock worth over Rs 8 lakh a month to retailers. Moreover, kids, he says, are now choosing Smoodh over a Rs 10 Cadbury Dairy Milk chocolate bar. “It’s the same price and its more filling than Cadbury.”

Similar sales across the country have ensured Smoodh is growing explosively: 300 million packs were sold in the seven months since its launch in September 2021. The company is on track to sell 1.3 billion packs by the end of this year. Already, it claims to have captured 33 percent share of the Rs 800 crore flavoured milk market by number of packs sold.

“Their entire strategy is based upon price point,” says N Chandramouli, a brand strategy specialist and CEO of TRA Research. “Amul is the king of dairy. It has control over the basic raw material, and if it hasn’t been able to reduce prices, you can imagine how tough it must be.” 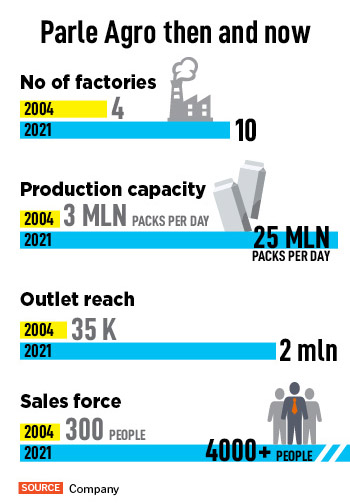 So how did Parle Agro crack it?

Simply put, “through sheer innovation”, as one analyst, who covers the dairy sector but is not authorised to speak to the media, puts it. Both at the front and the back end.

For a more detailed understanding, circle back to March 2020. As India plunged into a sudden and immediate lockdown, Parle Agro had stock worth over Rs 500 crore, including boxfuls of Frooti and Appy Fizz, ready to be shipped to retailers from its factories.

“March to June is the peak season for a beverage player. We do almost 65 percent of our business during these four months and here we were, clueless about what to do with all this stock that has a short shelf life,” recalls Madhur Pandey, vice-president of marketing at Parle Agro.

Almost overnight, the company built out a tele-calling platform to reach out to retailers, figured out deliveries to them in the wee hours of the morning and for the first time stocked products at pharmacies, which were allowed to remain open 24x7. They also forayed into ecommerce and commenced home deliveries for residential societies. Sales, as a result, kept ticking and the stocks were eventually exhausted.

But Chauhan and team wanted to do more. Confined to their homes and uncertain of the future, they knew people needed something to lift their spirits. While most others launched a frenzy of products claiming immunity benefits against Covid-19 and even cures for it, Parle Agro went the other way. It launched B-Fizz, an extension of Appy Fizz, in a record 30 days from lab-to-market in September 2020. A malt-based drink, B-Fizz has the taste and feel of beer. “People weren’t stepping out. And few people in India can drink at home with their kids and parents around,” says Pandey. “We launched this product for them.”

It turned out to be hit. Brand sales [sales of the product across all channels] totalled Rs 500 crore in just one year. “It was like a fresh breath of energy and life all over in the market. And as a brand it reached the Appy Fizz levels in a short span of existence and Appy Fizz is a very big brand for us,” says Chauhan.

Success notwithstanding, Chauhan was, all the while, plotting an even bigger expansion into dairy beverages. Over the last few years, the team had researched and developed over 1,000 prototypes before arriving at what was to become Smoodh.

Around the same time as Parle Agro decided to launch B-Fizz, Chauhan also took the decision to go ahead with a massive Rs 400 crore investment to foray into dairy. It wasn’t the company’s first time in the space. Back in 2001, it launched N-joi fruit milk but withdrew the product after four years despite it being hugely popular because of a lack of consistent supply of good quality milk. 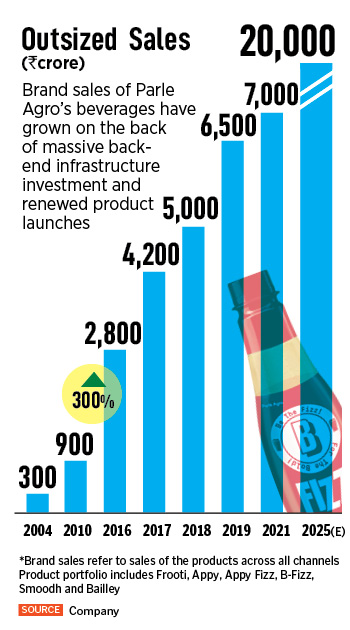 “This time around, the timing is right,” says Chauhan. First, dairy farming has progressed by leaps in the two decades since N-joi was launched and folded, enabling Parle Agro to secure consistent, standardised access to high quality milk. Second, Covid-19 has led to rising health consciousness among consumers and dairy, with its perceived health benefits, is best placed to capitalise on the shift. Says Tulsi Joshi, senior food and drink analyst, India, at Mintel, “In India, launch activity in flavoured milk soared in the 12 months to January 2022, corresponding with its reputation as affordable nutrition during the pandemic.”

Moreover, while N-joi was priced at Rs 12-Rs 15 for a 200ml pack, the Rs 10 price point was crucial for making Smoodh a success, says Chauhan. Innovation at both the front end and back end went into achieving it.

For example, much thought went into developing an 85 ml pack. The Rs 20 priced 180 ml to 200 ml packs available in the market today from the likes of Amul, Hersheys, Cavin Kare, Britannia, ITC, Mother Dairy, Parag and so on, are more than what a child can consume. So the drink is either wasted or an adult has to finish it off. Parle Agro’s 85 ml, however, is large enough to satiate a child and just enough to serve as a pick-me-up in between meals for adult consumers, says Chauhan.

Similarly, Parle Agro had to be innovative in how it approached the product financially. Unlike its competitors, it has set up multi-location dairy plants to be closer to consumers. In Sitarganj (Uttarakhand) and Ambala (Haryana) in the north, near Kolkata (West Bengal) in the East and Mysore (Karnataka) in the South. Another factory covering central India (Bhopal in Madhya Pradesh) is due to open shortly.

Moreover, while milk wastage of up to 4-5 percent is the norm in the industry—which in turn pushes up prices of the products—Parle Agro has reduced its wastage to “less than 0.01 percent” through “in-house technology development”, says Pandey, without letting in on more details. “There’s a math which has been derived at each level. We’ve developed several innovations like this at the back end which can’t be seen by anyone but are very critical when you see a Rs 10 product.”

The fact that Parle Agro is looking at scale has also allowed them to get to Rs 10 price point. “At the end of the day, nothing can help you with pricing other than high volumes. It is volumes which is allowing us to get to this price point,” says Chauhan. The volumes she’s referring to are eye-popping. Consider this: Chauhan’s vision is to make the entire dairy portfolio equal to Parle Agro’s beverage portfolio as it is today. Brand sales for the entire portfolio, which includes Frooti, Appy, Appy Fizz and Baileys, were Rs 6,500 crore in 2019. Smoodh’s brand sales in the first seven months of its launch were roughly Rs 300 crore. “It’s a huge ask to get to that level,” says the analyst quoted above. “But Parle Agro knows how to build brands. They’ve done it repeatedly.”

While Smoodh’s competition “can’t even dream” of bringing their prices down to Rs 10, says Chandramouli, regional markets where local players have a stronghold might be tough to crack. Aarey for instance in Maharashtra, Arun in Tamil Nadu or Saras in Rajasthan are well entrenched and well-liked brands.

That said, there’s massive headroom to grow. Despite the number of brands in the flavoured milk space the category is still under-developed. At Rs 800 crore, it’s a mere eight percent of the Rs 10,000 crore FFSD (Fruit Flavoured Still Drink) category and its largely metro based. The opportunity lies in the rural markets—where Smoodh’s contribution is already 50 percent—as well as innovate in sub-segments of the category. For instance, breaking through the barrier of being a “kids-only product” and fortifying the flavoured milks with high protein or calcium, positioning them as post workout drinks, developing interesting flavour profiles.

While the West maybe moving away from dairy to plant-based alternatives, in India, we’re still far from that shift, says Chauhan. Milk is culturally important in the Indian context, almost every household has it in some form every day. Further, by positioning Smoodh as “liquid chocolate”, Parle Agro is also hoping to crack the much bigger Rs 4,300, Rs 10-chocolate market led by Cadbury’s Dairy Milk. The opportunities, much like Chauhan’s enthusiasm, are endless.