How sales automation SaaS platform sharply focussed on India, roped in a clutch of angels and PEs and barged into the coveted $1 billion-valuation club 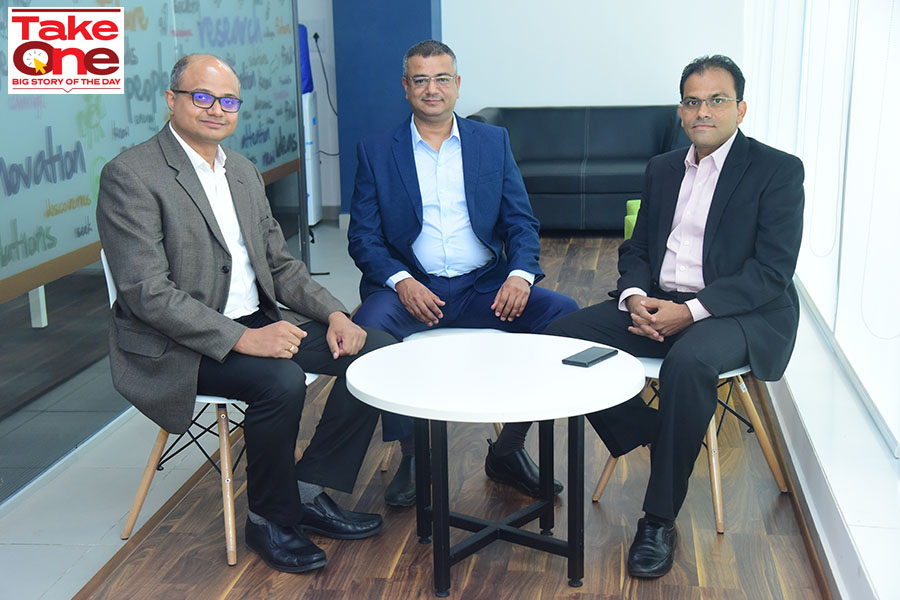 “Palo Alto, California, United States.” That’s how the LinkedIn contact information of Nilesh Patel reads now, in June 2022. A decade ago, though, it was something else. The second-time entrepreneur from Indore, who completed instrumentation engineering from Delhi Institute of Technology, worked at IBM for four years till 2002, sold his maiden venture Proteans to Symphony Teleca Corporation in 2010, and didn’t have Palo Alto or California, or the US on his bio, CV or credentials. “It was just Bengaluru, India,” recalls the co-founder and chief executive officer of LeadSquared, a Bengaluru-based sales automation SaaS platform.

In 2011, Patel along with his friends, Sudhakar Gorti, Prashant Singh and Sukhbir Kalsi, started B2B marketing and lead generation company MarketXpander, and two years later, in 2013, they rolled out LeadSquared. Over the next few years, the sales execution, marketing automation and field force management platform helped clients in improving efficiency in end-to-end customer journey. From marketing, call centre, inside sales, field sales, feet-on-street teams, verifications, collections, and vendor onboarding, LeadSquared did all, and scaled up handsomely within the country.

From a few lakh in operating revenue during the formative years, LeadSquared closed FY17 at Rs 11 crore, FY18 at Rs 19 crore and FY19 at Rs 33 crore. The bootstrapped startup, which had raised money from a bunch of friends since inception, was now growing at a fast clip and managed to grab the attention of Jyoti Bansal, who sold his application monitoring company AppDynamics to Cisco for $3.7 billion in 2017, a day before the company was due for its IPO. The same year, Bansal invested in LeadSquared as an angel. In spite of having a big name from Silicon Valley, LeadSquared still didn’t have any trace of US operations till 2018. “There was so much to do in India,” recounts Patel, who started scouting for maiden institutional funding.

Back in early 2019, LeadSquared had the right kind of numbers—one might call it degree—to attract venture capitalists (VCs). What, though, the SaaS company lacked badly was pedigree. “How much does US contribute to your sales,” was a recurring question faced by the founder. “SaaS companies can’t go big in India,” was another feedback. “You don’t seem to have a global vision,” was yet another criticism. “Investors liked our team, praised our work but shied away from investing,” rues the founder who found the entire fund-raising process ridiculous. “Arey interested ho to paisey kyon nahin daalte ho [if you are interested then why don’t you invest],” he used to ask irritatingly.

Then there were a set of funders who had only been exposed to life in Silicon Valley. For them, LeadSquared’s India play didn’t make any sense. After a few months of harrowing experiences, Patel lost hope. Palo Alto, California, and the United States is what everybody wanted to hear. But Bengaluru, Hyderabad and India is what he had. “There were no takers for our story,” he laments.

There was a twist in the tale, though. In May 2019, LeadSquared raised $3 million in series A funding from Stakeboat Capital, a private equity investor. A year later, LeadSquared closed FY20 at Rs 59 crore and in December raised $32 million in series B. The round, led by private equity player Gaja Capital, also saw participation from Stakeboat Capital and Bansal. In early 2020, the company started its operations in the US, and over the next two fiscals the operating revenue galloped: Rs 100 crore in FY21 and Rs 200 crore in FY22. Interestingly, still 90 percent of the revenues came from India, and LeadSquared’s list of Indian clients swelled and included the likes of Byju's, Amity University, Olx, Dunzo, Practo, Poonawalla Fincorp, Godrej Housing Finance, and Angel One.

Fast forward to June 2022. Another PE biggie—WestBridge Capital—pumped in $153 million in the series C round of funding, valuing LeadSquared at $1 billion. In perhaps a first-of-its-kind in India, LeadSquared has entered the coveted unicorn club without any VC funding! Patel, who has set a target to double revenues in FY23, tells us what he is planning to do with the biggest funding round by his company. LeadSquared will double down on investments in India and North America; will start building in Asia Pacific (APAC) and Europe, Middle East and Africa (EMEA); will beef up its product portfolio and fund its acquisition plans. “To support our growth, we plan to double our headcount in the next 18 months,” says Patel. “Palo Alto, California, United States,” is how his LinkedIn profile now reads, and Palo Alto is where Patel is now relocating.

Also read: SaaS rising: India is ready for its next IT moment

The new backer is elated with the pace of growth. “LeadSquared has shown a remarkable ability to scale and grow efficiently,” contends Sumir Chadha, co-founder and managing director at WestBridge Capital. The core SaaS metrics of the company, he lets on, are unique and best-in-class in the industry. Its focus on building an easy-to-use platform that transforms sales processes through automation, delivering unparalleled efficiency, has significant potential for growth in the global market. LeadSquared has over 2,000 customers, including high-growth organisations from edtech, higher education, financial services, health care, marketplaces, and more. “The future of LeadSquared is very exciting to us,” he adds. 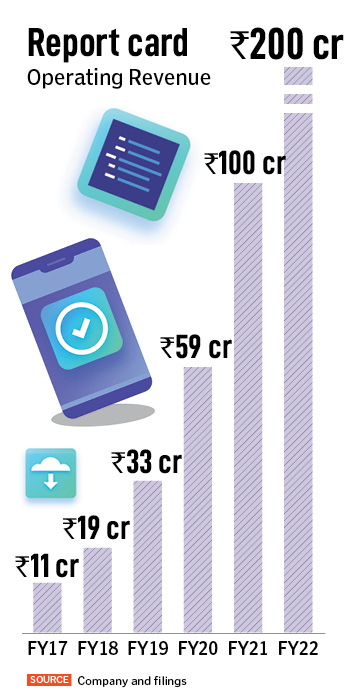 Back in 2019, Gaja Capital was looking for SaaS companies that had strong market leadership in India, and also had the potential to scale globally, especially in the US. LeadSquared ticked all the boxes. “We liked the strategy of the company to focus on no-code, verticalised solutions to solve the specific needs of each industry vertical which is where the SaaS industry will evolve to,” says Imran Jafar, managing partner at Gaja Capital. LeadSquared’s leadership in the education and edtech sector, he points out, was also a big reason to invest. “With the latest round, the company has the balance sheet strength to further invest for growth in India as well as international markets, especially the US,” contends Gopal Jain, managing partner at Gaja Capital.

Back during the early years of LeadSquared, growth was never a challenge. “We are probably one of the few companies that managed to raise Rs 17 crore from angels,” says Patel, underlining that the company never faced a capital crunch. The issue, he confesses, was his inability to sell the strong India story to the investors who always looked for the US hook. Another challenge was to support startups in the high-growth stage. The furious pace of scale meant that LeadSquared had to stay nimble and keep upgrading and tweaking its offering to meet the high demand of startup clients. “We always used to be on tenterhooks,” Patel recounts, explaining the high intensity of pressure that the company used to work under. “Kaafi clients left indicator de ke right turn le lete they [many of them used to turn on the left indicator but suddenly take a right turn],” he says. The pressure, though, helped LeadSquared in learning how to grow in the fast lane.

Also read:  Work, Force, Energy & PhysicsWallah: Meet 'Robinhood' Pandey, and his freshly minted edtech unicorn
Life in the fast lane, though, comes with its flip side. The pandemic, and the lockdown in March 2020, was one such moment for LeadSquared. While the possibility of clients defaulting became serious over the next two months, many started renegotiating the terms of payments. Patel, though, was dismissive in his approach. “I thought that the pandemic at best would be a three-four month thing,” he recounts. His well-wishers warned him. “Beta, halke main mat lo. Nipat jaoge [Don’t take it lightly, you will get badly hurt],” was the warning. Fortunately for LeadSquared, the leadership team pressed the panic button, started collecting money from clients on war footing and ensured that there is enough balance in the bank. What also helped in riding out the crisis was an edtech boom. As Byju’s and Unacademy scaled furiously, LeadSquared too leapfrogged.

So what next for the SaaS company? Is it an IPO or eventually selling out as Patel did with his first venture? The founder reckons that his goal is to create a sustainable and huge company. An IPO is great, but can’t be just the only badge to wear, he says, claiming that the burn rate of the company is well under control and posting profits would take some time. “The goal is to keep growing the company, and squaring the lead,” he says, alluding to the name LeadSquared. The name, Patel underlines, was to bring home the point that all the sales lead would have an exponential growth if squared. By getting ready to roll out a deeper play in the US and other countries, Patel is leading from the front to leapfrog LeadSquared into a much bigger company.