Ambulance drivers transported those who succumbed to Covid-19, regardless of risk to their own lives 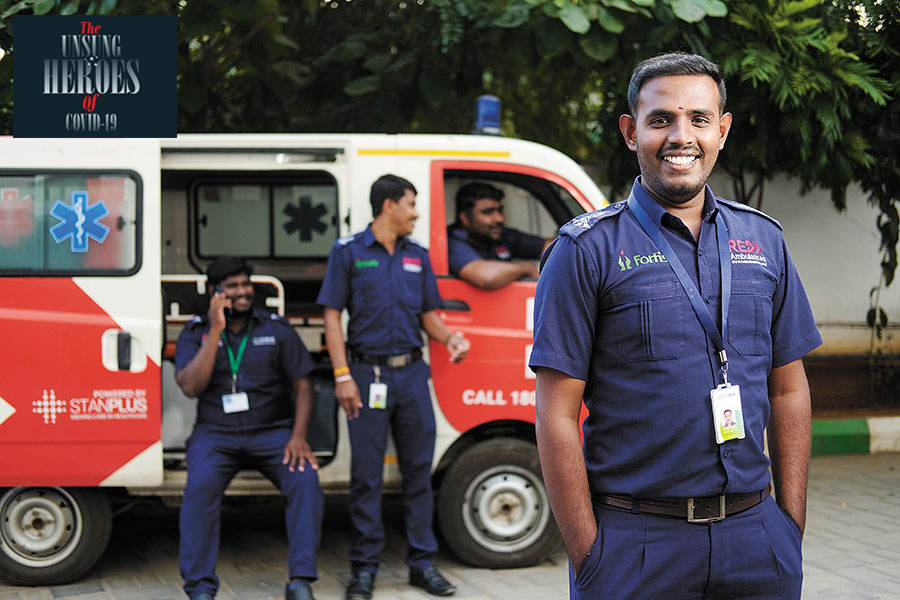 In October 2020, Arif Khan, a 48-year-old ambulance driver in New Delhi died after battling Covid-19 for a day.

For over six months before that, he had spent much of his time in his ambulance or the parking area, ferrying over 200 dead bodies in the National Capital Region. Khan was employed with Shaheed Bhagat Singh Sewa Dal, a non-profit that provides free emergency services in New Delhi.

“It’s very sad that we lost him,” says Jitender Singh Shunty, founder of Shaheed Bhagat Singh Sewa Dal. “He worked tirelessly during those times, staying in touch with his family mostly through just the phone.” The organisation ferried over 850 dead bodies and cremated them between April and December, according to Shunty.

“It’s exhausting, mentally and physically,” says Govinda Raju, an ambulance driver at the Fortis Hospital in Bannerghatta in Bengaluru. “In the initial days, there weren’t any protocols in place. People were scared, and our families were also very worried.” Raju continues to work all seven days a week.

“For over two months, I had not spoken to my family, after being confined to a separate room in the house,” he says. “I have old parents, and while I have a hot water shower and wash my clothes before going into the house, there is always the fear of spreading the disease.”

Yet, it was important for him to be on the road. That’s because Bengaluru accounts for nearly half of Karnataka’s Covid-19 cases, a tally that stood at over 900,000 by end-December. “We knew we had to be selfless, and stop worrying,” Raju says. “Many people depended on us in their moment of crisis.” India had some 25,450 state-run ambulances, and 39,259 private vehicles registered for emergency services, as of June 2019, according to the National Health Mission Report and the Ministry of Road Transport & Highways.

Despite that, at the peak of the pandemic, many cities were struggling for ambulances. For the drivers, however, the most difficult part of the job had been in dealing with deaths and ferrying bodies to cremation grounds. “It is often difficult to come to terms when a patient dies,” Raju says. “With Covid-19, during the initial days, relatives could not accompany the bodies. It was heart-breaking.” Over time, one relative was allowed to accompany the deceased in the ambulance.

“Usually, coffins are buried six-feet deep,” he says. “With Covid-19 cases, bodies were buried eight-feet deep.” Raju, whose father is also an ambulance driver, was the sole earning member of his family during the lockdown since his father stayed at home fearing the risk involved. Raju earns around ₹16,000 a month.

Being on the frontline has also had its fair share of troubles. For instance, in Bengaluru, an ambulance driver was beaten up by the relatives of a deceased Covid-19 patient after a hospital couldn’t admit him due to the unavailability of beds. The family members beat up the driver for allegedly not keeping an oxygen kit in the ambulance. In Chennai, an angry mob injured an ambulance driver and municipal corporation health officials after they had gone to bury the body of a surgeon who had died due to Covid-19, over fears of the infection spreading.

“The threat to life was very serious because we were working so closely with the patients,” Raju says. “But, at the end of the day, we know that we played a crucial role in helping people.” That even included helping the Bruhat Bengaluru Mahanagara Palike, Bengaluru’s administrative body, which would use ambulance drivers to collect information of patients and their relatives. “We were tasked with informing the families to get tested,” he says.

While Raju and thousands of drivers like him across India played a crucial role in ferrying patients to hospitals, Khaalid Ahmed and his team of volunteers in Chennai were making sure that the deceased were given a proper farewell. Through his volunteer-driven Chennai-based NGO, Uravugal, Ahmed started with a team of three members to bury those who succumbed to the virus. “A lot of people who were in quarantine weren’t able to give a kind farewell to their near and loved ones,” he says. “We took the role of brothers or sons. From the beginning, we were clear that we won’t be very worried about the virus.”

From three volunteers in the early days of the lockdown to over 15 now, Ahmed and his team buried or cremated over 700 dead bodies in the past eight months. “Most of the calls were from Chennai’s suburbs and nearby towns,” says Ahmed, who also tested Covid-19 positive in July. “We would go and complete all the formalities from scratch. Incidentally, many of the volunteers would work in the IT sector through the day, and join me in driving ambulances or burying the deceased at night.”

Ahmed knows that his work isn’t over yet. “We will strive to ensure that there is dignity in death and we will not stop till that happens. We try to take up causes that society fears.”