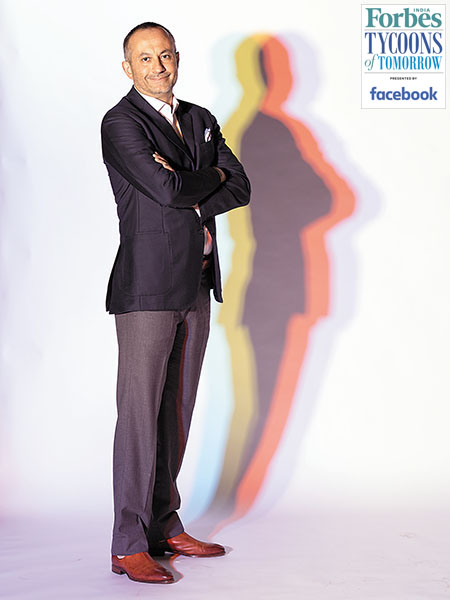 Vikram Shroff, Executive Director, UPL
In 1995, when Vikram Shroff, 45, had finished studying chemistry at Mumbai University, he had a ticket to England waiting for him. The then-23-year-old thought he was on his way for a vacation. Instead he was told to get to work at UPL’s factory at Warrington. It was through shifts in laboratories and accounts departments that Shroff learnt the tools of the trade.

Shroff and his elder brother Jaidev have been instrumental in the company’s rapid growth over the last decade. They’ve transformed the manufacturer of red phosphorus (started by father Rajju Shroff as United Phosphorus Ltd) used in safety matches into a global powerhouse that caters to the need for crop protection. One reason for their success: They’ve clearly demarcated roles—“he’s captain and I am vice captain”—and the last word rests with Jaidev. Click here for the full Tycoons of Tomorrow list

This, Vikram argues, sends a clear signal on the command structure to all stakeholders. “My job description is what anyone else in the company misses. This could range from constructing our new office to getting a visa for someone for an international trip to travelling to Delhi for an advocacy trip to meeting customers in Brazil,” he says.

Acquisitions have been a tried-and-tested model, propelling the company to ₹35,000 crore in market capitalisation. Case in point is the recent $4.2 billion deal for Arysta LifeScience. Shroff believes they’ve struck a bargain. As a rule UPL avoids getting into a bidding war and negotiates privately one-on-one with owners. “Bad luck (due to unpredictable weather) is guaranteed in this business so we make sure we never get into a bidding war and over pay,” he says, pointing out that Australia is suffering a drought now.

The Shroffs have made sure they’ve created an agile organisation that can respond to situations quickly. Their planning cycle is reviewed every 15 days, enabling them to deploy resources in markets that are growing and more importantly, conserve their firepower in markets that are under stress. Click here for the full Tycoons of Tomorrow list

While there are concerns over the $3-billion debt that UPL has taken for the acquisition, Aditya Jawahar, an analyst at brokerage Investec, says: “The quality of the asset is good and the geographical synergies with UPL’s other assets mean that Arysta should pay for itself.” That’s not a bad result for someone who in 1995 joined a mere ₹100-crore business.